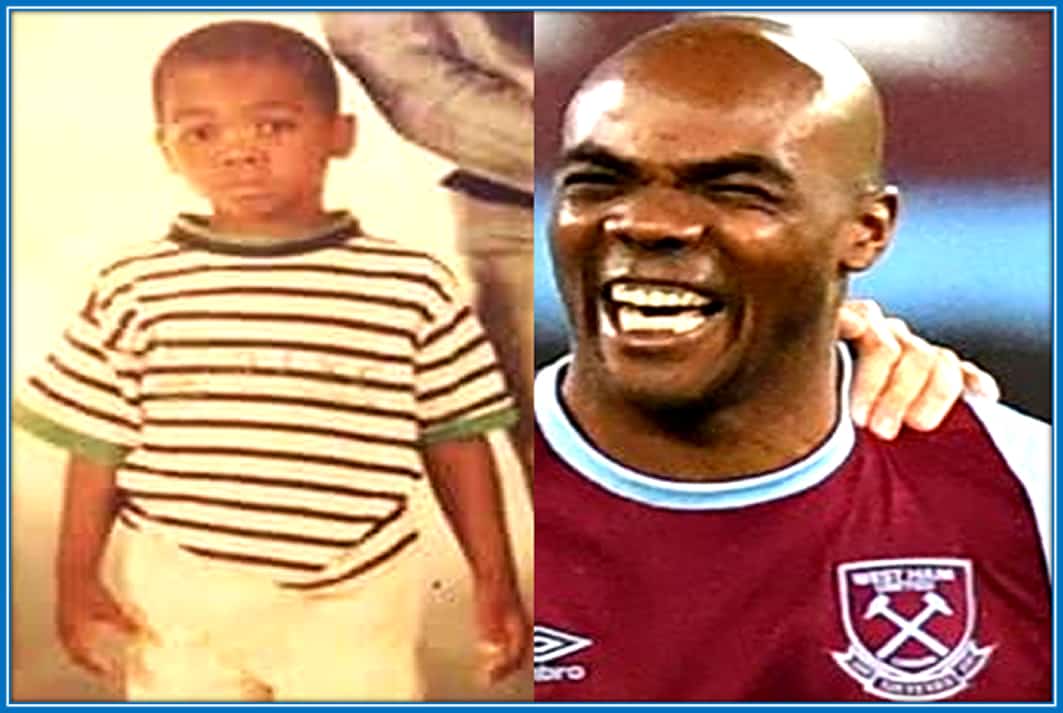 In simple terms, we present the Ful History of Angelo Ogbonna, an Italian Born Nigerian defender. LifeBogger analyses Bonne’s life journey – from his early days to when he became famous.

To whet your autobiography appetite on how engaging our version of Angelo Ogbonna’s Biography would be, we present you his boyhood to adult gallery. Without a doubt, Bonne has come a long way in his amazing Life and Career Journey.

Yes, everyone knows of his outstanding physical attributes, which allow him to read the game. No wonder Roberto Mancini has recalled him into Italy’s squad to prepare for the Euros 2021 competition.

Despite all these accolades, only a few fans know Angelo Ogbonna’s life story, which is quite fascinating. Without further ado, let’s begin.

For Biography starters, he bears the nickname “Bonne”. Obinze Angelo Ogbonna was born on the 23rd day of May 1988 to both a Nigerian father and mother (a nurse) in the town of Cassino, Italy.

The footballer is the second of three children (Paola, Angelo and Emily) born of the union between his parents.

As the only son of his family, Angelo enjoyed some special privileges – a feat that is customary for most Nigerian mums and dads.

Guess what?… One of Ogbonna’s parents looks quite young despite being in her fifties, and we’ve got proof of that here.

For some reason best known to the Italian player, he excluded his father from the stories of his childhood experience.

As a little boy, the talented full-back became so attached to his mother and sisters, Paola and Emily. Together, they formed a close-knitted household.

Being able to sponsor their migration from Nigeria to Italy implies that his Mum and Dad were financially stable.

A result from our research reveals that the defender hails from a middle-class family background — one who lives and fares comfortably as above-average Italian citizens of Nigerian descent.

Sadly, his black skin has not excused him from the claws of racists who take pleasure in abusing his ancestral roots.

Angelo Ogbonna’s family city of Owerri is in the eastern part of Nigeria. Most people refer to the metropolis as the entertainment capital of Nigeria because of its high-street casinos and quality centres of relaxation.

Despite being born in Italy, Ogbonna has learnt to speak the Igbo language — the dialects of his parents.

The Hammers defender started his soccer expedition after his parents encouraged him to mingle with other kids in the Italian Cassino neighbourhood.

Beyond expectation, his first attempt to play the game turned out to be quite appealing, despite being a shy kid.

After showing some promise, Ogbonna’s mother had him enrol at Nuova Cassino’s youth set-up, where he laid a good foundation for his future.

Interestingly, the boy soon knew the meaning of teamwork as he began training with new friends.

Seeing that their only son became more recognized than his peers, his family got the sign that football was his calling. Sadly, as time went on – Angelo’s gameplay saw its worst. His early footballing years saw lots of technical flaws.

In order to correct what seemed to be a barrier to his young career, Angelo’s mum sought a well-equipped academy.

It was at such a moment of desperation – in 2002 – that Torino came and he passed their trials. Fast forward to the age of 14, Ogbonna signed a professional deal with the Italian club. 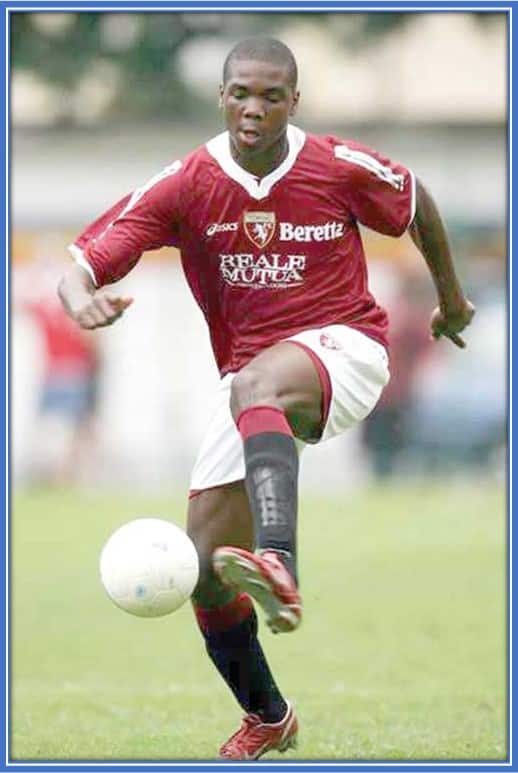 Playing for The Bulls, the youngster perfected both his tackling skills and authority in the air. A reward for his hard work came at a time when news of his rare talent began spreading across Italy. At that time, many clubs came begging for Angelo’s signature.

After doing well in his loan move to Crotone in the 2007-08 season, Juve triggered a summer transfer offensive on him.

As destiny would have it, Ogbonna’s mother – around July 2013 – approved their idea of her son joining the Old Lady. 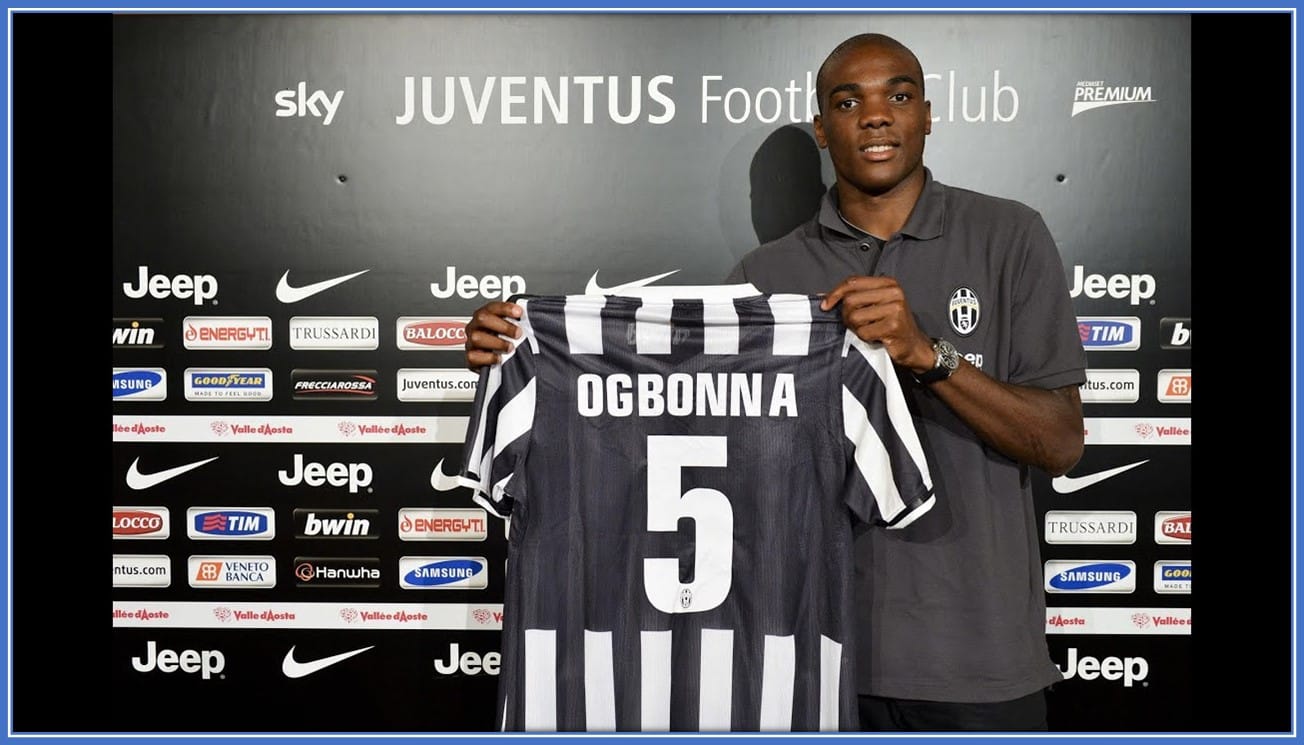 At Juve, the centre-back went from strength to strength thanks to a formidable partnership with Leonardo Bonucci and Giorgio Chiellini.

Although being behind in the pecking order saw the big man counting his days with the Girlfriend of Italy. With full support from his family, he signed a £9.97 million deal with West Ham United in 2015.

The English Premier League turned out to be a favourable ground to his playing style. With the Hammers, Ogbonna sealed a solid defensive partnership with Vladimír Coufal and Issa Diop.

Being one of the driving forces of David Moyes armoury, Ogbonna became the third consecutive Hammer in FIFA Team of the Week – for November 2020.

We’ve prepared a video that will help you understand why fans dubbed him – The Wall. The rest, as we say, is history.

Walking in the part that differs totally from a certain Algerian – Said Benrahma, Obinze (as called by his sisters) as at 2020 is in an active relationship with his girlfriend turned baby mama and wife.

At the time of putting up this Bio, Laura is Angelo Ogbonna’s wife-to-be. She has remained loyal to him through thick and thin.

As said by fans, the couple’s unique way of outing – dressing in Japanese outfits – is second to none. 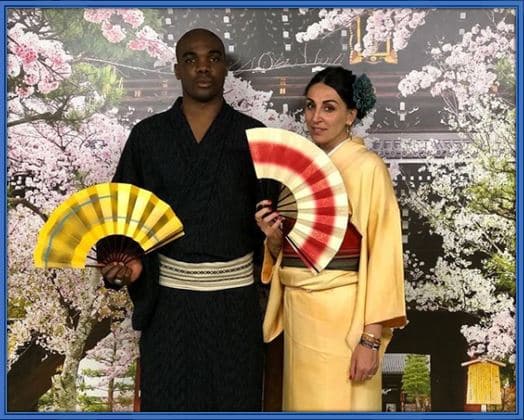 Although the lovers – not yet married – are already enjoying the full support of their families. As I write, the footballer and his girlfriend already have a son named Samuel Ogbonna.

During the 2020 COVID-19 lockdown, both lovers are expecting the birth of their second child.

To ensure the safety of his mum (a nurse), sisters and loved ones, Ogbonna did the needful. He once became vocal as he complained about how Britain underestimated the impact of COVID. Without question, the Italian-born Nigerian is an ideal family man.

Yes, he appears to be quick-witted and aggressive on the pitch. However, there is more to his personality than what meets the eye. First and foremost, Ogbonna’s persona is a blend of the Gemini Zodiac trait.

On another note, just spending a moment with Angelo would make you realise his affectionate and kind personality.

Like Pablo Fornals, the West Ham powerhouse often recruits himself to quiet places. Like here, we see him resting at the beautiful scenery outside his house in London. 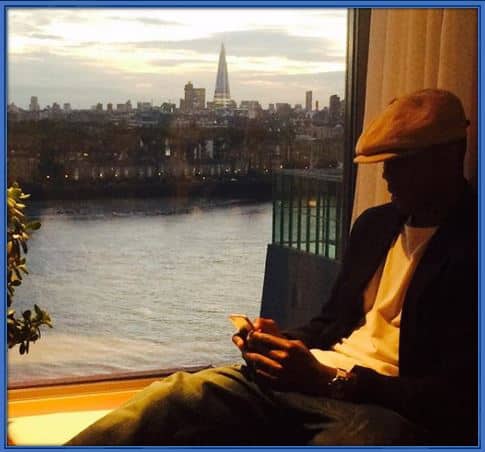 The year 2020 has seen Obinze earning a bit more than Tomas Soucek and less than Jarrod Bowen. He makes an annual Salary of approximately £3.64 million.

Though it’s lots of money, Ogbonna doesn’t see himself living an exotic lifestyle. Such include those easily noticeable by flashy cars, big houses, girls, booze, etc.

What’s more?… His earnings have raised his Net Worth to an estimated sum of £15 Million (2020 Stats).

Despite lots of soccer monies in his pockets, fans have questioned Ogbonna’s dressing habits. See for yourself.

Speaking to West Ham media, he made the world understand the most vital thing to his existence. Ogbonna said; Family and Football are the only two things that bring him relief.

Now, we’ll present you facts about a member of his household, starting with his beautiful sisters – Paola and Emily. 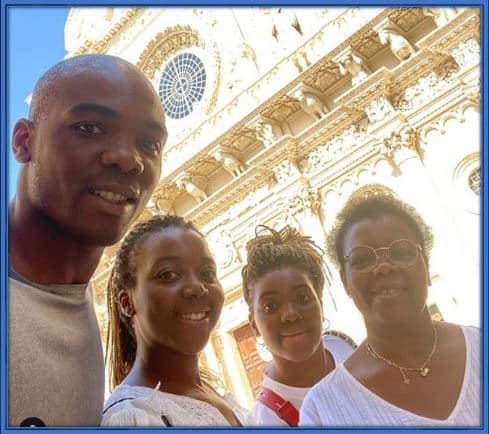 The footballer’s sisters, Paola and Emily, played a huge role in spicing his childhood experience.

Presently, Angelo Ogbonna’s siblings live in Italy but often pay their brother visits to his home in Stratford, East London. 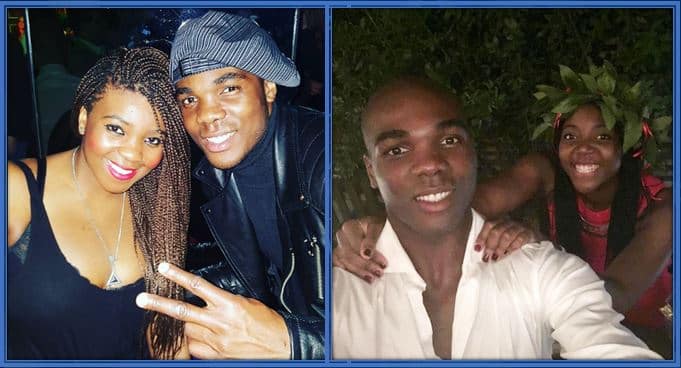 We all know that the joy of every parent is to see their child live a happy and healthy life. This is the case of Ogbonna’s mother, whose dress speaks a lot about her profession -a nurse. 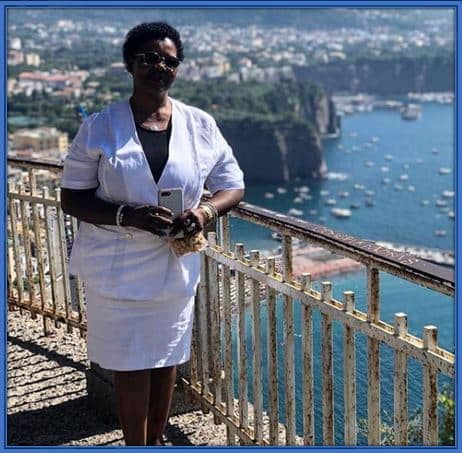 Research shows that the mother of three single-handedly brought up Angelo, Paola and Emily. This happened without their father. As a nurse, she ensured Angelo didn’t lose focus on achieving greatness through soccer.

Despite his rise to stardom, the centre-back has said nothing about his dad. Amongst his parents, Ogbonna fondly attributes his career success to his mother.

Maybe his Dad suddenly had a breakaway from the entire family. Again, maybe worst — he may have lost his life to the stiff hands of death.

One of the most renowned relatives of the centre-back is his cousin, Prince Eleazar Onyewuchi Ogbonna. Both share a similar surname, a feat that reveals a paternal relationship. 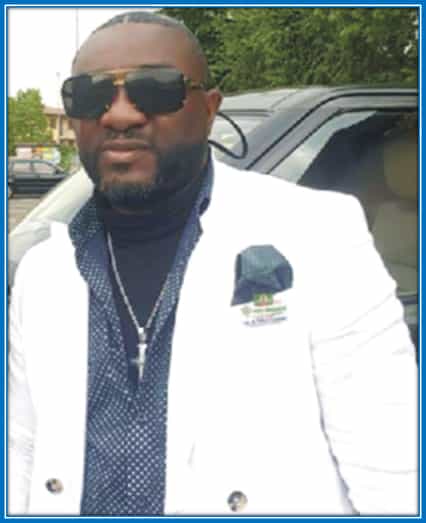 Prince Eleazar Onyewuchi Ogbonna is a seasoned football technocrat who has also got eyes for sports. Aside from him, there’s been no information about Ogbonna’s remaining extended family. Also, his grandparents, uncles and aunts.

To round up the Life Story of Obinze, here are a few truths to help you understand his memoir.

Angelo Ogbonna has experienced a moment that still gives him a lump in the throat. In 2008, while still featuring for Torino, the “football Wall” sadly fell asleep at the wheel after a stressful night game.

By the time he woke up, his car had already crossed to the other side of the road – plunged into a river in Turin. Thankfully, Ogbonna survived the unfortunate accident.

“I AM LUCKY TO BE HERE TALKING TO YOU. THAT NIGHT, I WAS DRIVING TO THE AIRPORT, AND I FELL ASLEEP.”

“WHEN I WOKE UP, MY CAR WAS ALREADY AT THE OPPOSITE SIDE OF THE ROAD. IT HAPPENED SO QUICK. I HIT THE FENCE AND WENT DOWN INTO THE RIVER.”

From the breakdown, an average Italian citizen will have to work for at least three and a half years to earn what Ogbonna receives in a month. The average Nigerian, on the other hand, needs to work for 105 years before they can amass what the full-back earns in a month.

We’ve strategically put up an analysis of what he makes as the clock ticks. Find out for yourself how much he has earned since you came here.

Since you began viewing Angelo Ogbonna‘s Bio, he earned this with West Ham.

Facing Marcelo Bielsa’s counter-attacking side in the 2020-21 EPL season is difficult for most teams.

However, Ogbonna granted the Hammers victory over Leeds after he scored the winning goal with a header under the captainship of Declan Rice.

It all happened on the birthday of Declan’s mother, who turned 54 years as at 2020. Hence, Declan praised Ogbonna as an outstanding player while wishing his mum happy birthday!.

The name (Angelo) has already given up his religious status. He may not be a church boy. However, he keeps the sabbath day holy and adheres to the commandments of his Christian faith.

Once upon a time, Ogbonna saw good ratings. This has now dropped because he has passed his peak. Owing to his recent 2020 performance, we can say FIFA undervalues him – as they did to Arthur Masuaku. 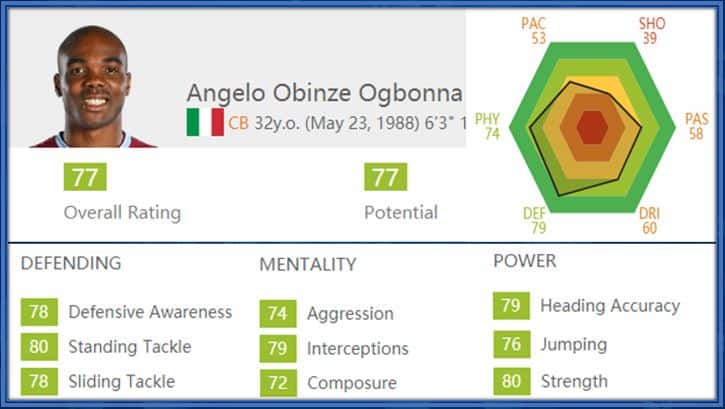 In the course of reading, we realize that the Biography of Angelo Ogbonna has taught the following; For a footballer, patience is not the ability to wait, but the act of keeping a positive attitude while waiting.

Getting lowered down the pecking order at Juventus was bitter, but life at West Ham has remained sweet for Ogbonna.

Also, we commend his parents (especially his mother) for entrusting her care towards him throughout his career.

Also his entire family for standing with him in moments of turmoil – like his 2008 accident. It behoves us to mention his sisters (Paola and Emily), who lighted up his childhood with liveliness.

Thank you for staying with us in our continued quest to deliver African Football Stories. Kindly contact us if you find anything that doesn’t seem right in our article.

Otherwise, share with us a comment on what you think about the Italian footballer of Nigerian origin. Finally, our Wiki table contains a summary of Angelo Ogbonna’s Bio.