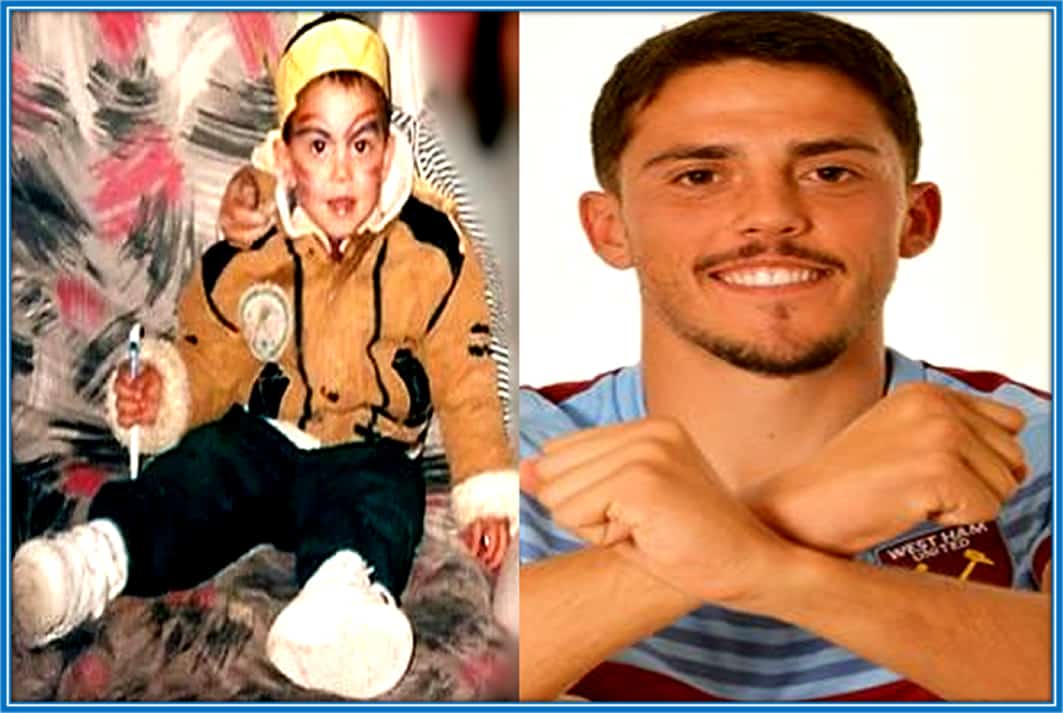 Our Biography of Pablo Fornals portrays Facts about his Childhood Story, Early Life, Family, Parents, Girlfriend/Wife to be, Lifestyle, Personal Life and Net Worth.

In straightforward terms, we present to you his life journey, from the earliest of days, to when he became famous.

To whet your autobiography appetite, here is his boyhood and rise gallery — a perfect summary of Pablo Fornals’ Bio.

Alongside Declan Rice, Fornals is a top-performer for West Ham United, one who for sure knows what how to keep working and dreaming high.

Despite the accolade, most fans know little of his life history, which we shall unveil in an instant. Without further ado, let’s begin with the story of his early years. 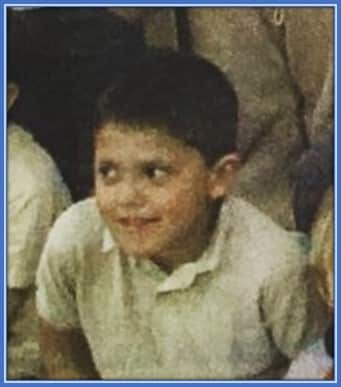 For Biography beginners, he bears the nickname, Pablito. Pablo Fornals Malla was born on the 22nd day of February 1996 to Spanish parents at Castellon, the fourth most populated city in the Valencian Community, Spain.

Pablito is the youngest in his family — a household of two children born of the union between his Dad and Mum.

Judging from the photo, you’ll agree with me that the Spaniard took after his mother’s facial appearance.

He spent his sweet boyhood years alongside his elder sister — Marta. Having her as a playmate means experiencing less loneliness.

ack in the days, Pablo was fond of making Marta use his colour marker to draw lines over his face. Does this represent a superhero?

Also way back, Pablo loved to have his sister wear him some cool Vandana. The memories of his childhood were never devoid of love, not only from Marta but every member of his household.

First, his brood isn’t among Castellon’s wealthy citizens. Pablo’s parents raised him in a family which is near the Spanish middle-class.

Back then, his Dad would to work extra hours to meet up to the standard of the average citizen. In case you didn’t know, the super father of two cleaned the streets of Castellon as a full-time job.

The Technical Dribbler learnt to speak Spanish and Valencian, a language spoken by the people of Barcelona.

Pablo Fornals’ birthplace (Castellon) belongs to the Catalan region, and it is one of the four major ethnic groups in Spain. 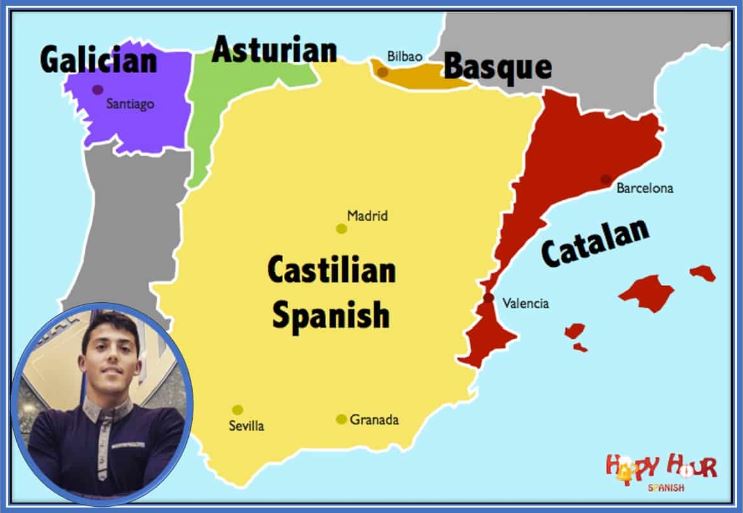 Are you aware?… he was never big on football during his childhood days. Back then, he was more immersed in the fantasies of delving into Tennis like his childhood hero, Rafael Nadal. Later on, reality became more vicious than his aspirations.

Once upon a time when the young he was 7, Pablo heard his father applauding the kids who played football close to his workplace.

Out of curiosity, Pablo, who only had eyes for lawn tennis, asked his dad to tell him more about soccer.

Instead of talking about the game, Mr Fornals enrolled his son at ACD Benicense — an affiliate of Villarreal.

Truth is, he wanted Pablo to experience the fun of soccer rather than hear of its excitement. It was at the academy that Pablito started up his football expedition as a striker. 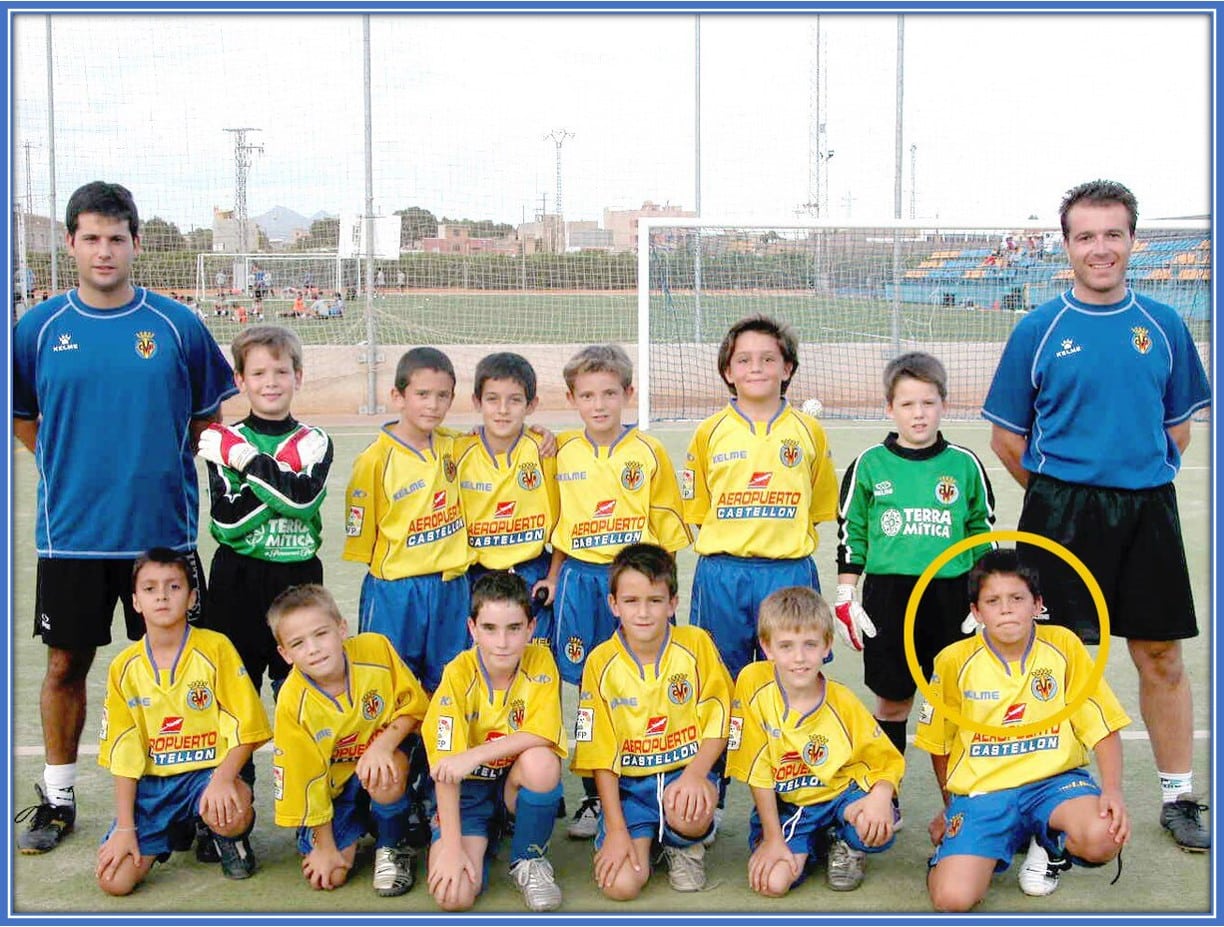 For five years, he underwent rigorous training. At some point, Pablo Fornals parents weren’t satisfied with his improvement and then had him transfer to a more promising side (CD Castellon) in 2008. 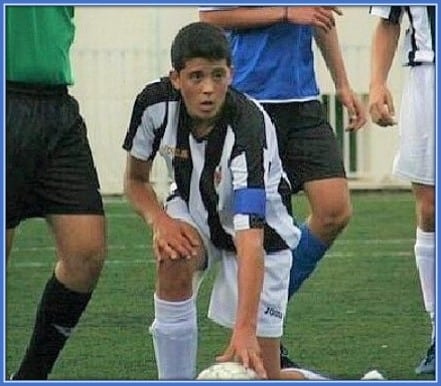 He even lost all hopes to sign a professional contract with a prominent club. When he was at his worst form with no scout coming to seek his signature, Fornals took refuge from his family.

Ironically, it was when he least expected an opportunity opened up for him to join Malaga in 2012.

Taking his chance, he joined the club as an attacking midfielder. Thereafter, spending the next five years cementing himself in their hall of fame and earning the applaud of veteran players like Andres Iniesta. 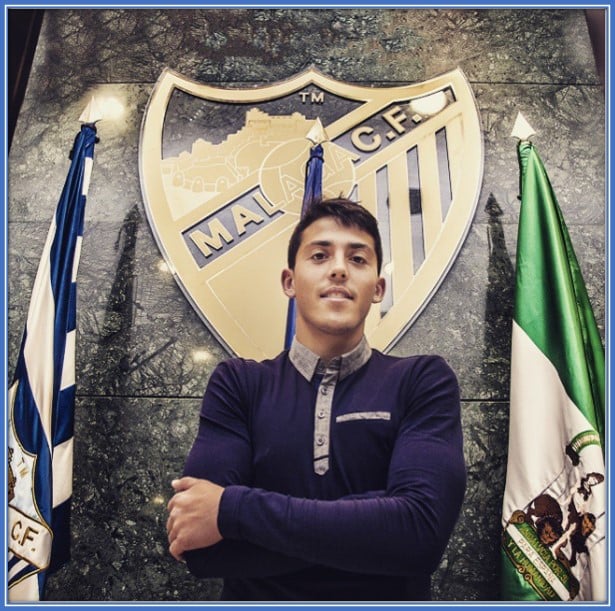 In the quest of joining his dream club (Villarreal CF) Fornals paid his buyout clause worth £10.7million.

Afterwards, he signed a five-year contract with Villareal in 2017. After a season with them, he began attracting national team and club scouts.

Seeing the confusion which came because of the quest of knowing the right club to sign for, Fornals (as usual) turned to his parents for advice.

Being told to choose a club where he would feel at home, the iconic midfielder gave West Ham United the green-light.

In June 2019, West Ham signed the forward for a fee of £24 million. Are you aware?… the club began chasing his signature since he produced a Rabona assist for Spain in the 2019 European Under-21 Championships.

Since joining the Hammers, Fornals has formed a formidable partnership with Arthur Masuaku, Sebastian Haller, plus a host of others. The Video highlights tell more of his armoury.

Again, since his arrival at the EPL, Fornals has become an integral part of David Moyes’ dream team.

As I write, his incredible performance just earned him the Premier League EA Sports Player of the Month award nomination for November 2020. The rest, as we say, is history. 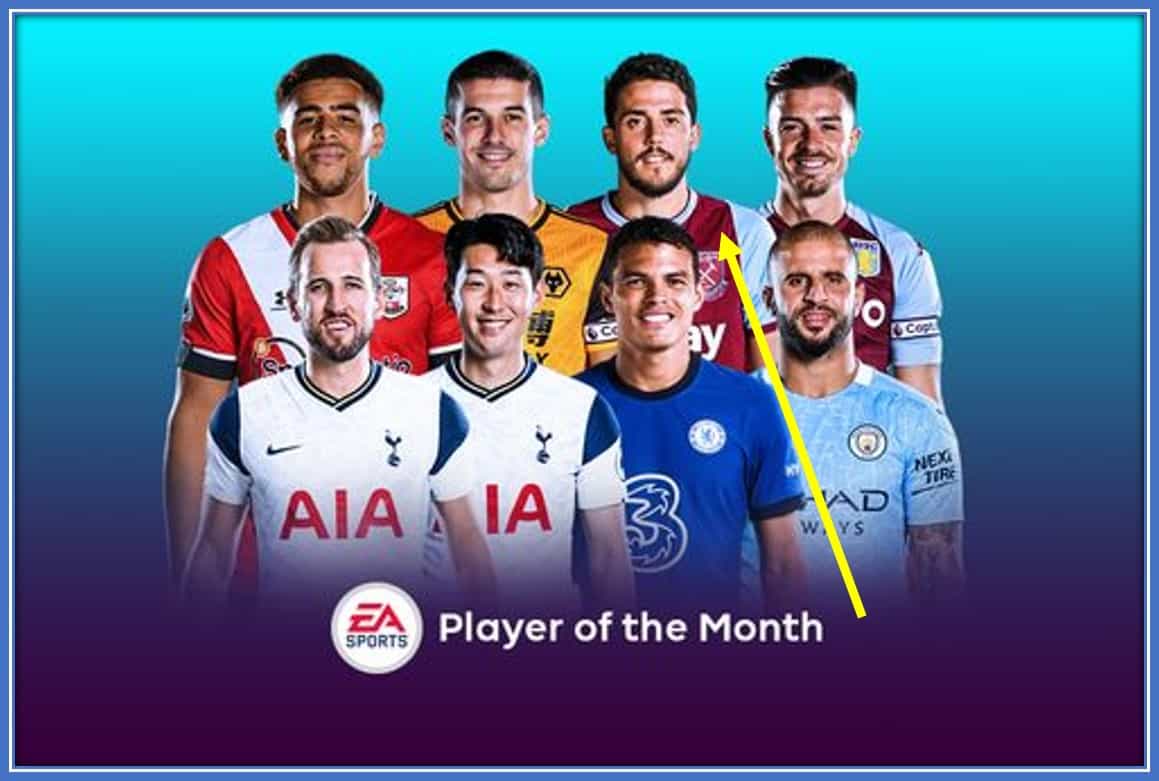 Aside from his mother and sister, the revered dribbler has got one other lady who makes his Biography complete.

Pablo Fornals wife to be is no other than Tania Lara. Their love story dates as far back as June 2016 when they first met in Castellon.

While celebrating their fourth anniversary, Fornals gave his girlfriend (Tania) a piggyback at Covent Garden, London.

Judging by the way both are going, we believe he would soon take Tania to his parents, seeking their blessings for marriage. 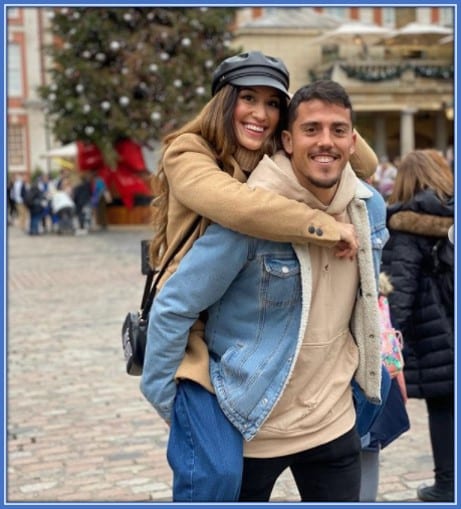 Away from the soccer pitch, Pablo Fornals often visits quiet places, especially river scenery, where he admires the beauty of nature.

This is quite similar to the personality of fellow West Ham teammate, Said Benrahma. Often, both get entangled with nature as a way of catching some breath and staying away from the game. 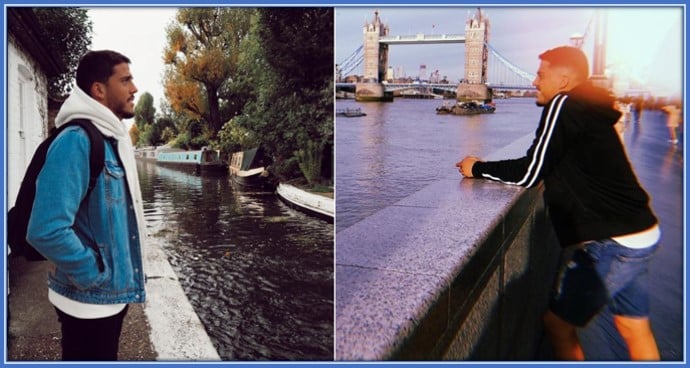 Amongst the so many natural things he loves, he prefers listening to Spanish rap or Reggaeton. Lastly, Fornals enjoys eating with his hands washed than making use of cutleries.

After carefully researching his Biography, our team found out that Fornals has not always paid attention to luxury until his move to West Ham.

Despite his enormous earnings, the playmaker only got his driving license in 2019 with the red Audi car pictured below. 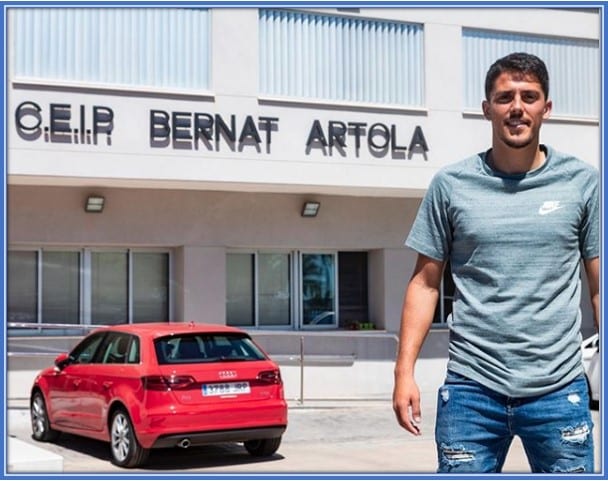 Judging by his estimated Net Worth of £2.7 million, Pablo Fornals can live a luxurious lifestyle. However, he has trod upon the paths of Adama Traore by keeping his assets on a low-key while he lives an organised life.

For the ex-Villarreal player, the road to success wouldn’t have been palatable without the help of his household.

His parents, sister and relatives are the major reason he escaped the inexplicable feeling of loneliness when the going got tough. This section provides more facts on his parents and family members.

The fact exists that his resilience and absolute commitment have a deep connection with the lessons he learnt from his dad.

Hardly can Pablo Fornals forget the sacrifices made by his father, who often drops him at the training ground before going to clean the streets.

Even when his performance gets poor, his dad often made sure he cheers on him from the side-line. 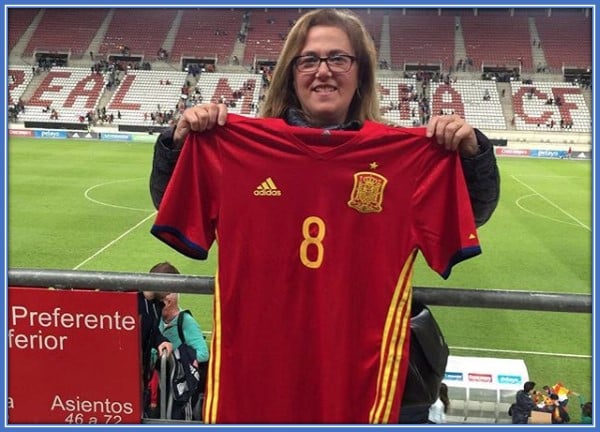 Of course, we do not leave his mom out of the bedrocks that have supported his ambitions from his childhood days.

By default, Pablo Fornals’ mother showered him with unconditional love. Her presence on the pitch is enough catalyst that gives Pablo the absolute motivation to perform beyond expectations.

Right to this moment, his only sister, Marta Fornals, still plays the role of a brother and best friend.

The Castellon native believes he is incomplete without his elder sister. Both siblings do catch up despite Pablo’s busy schedules. 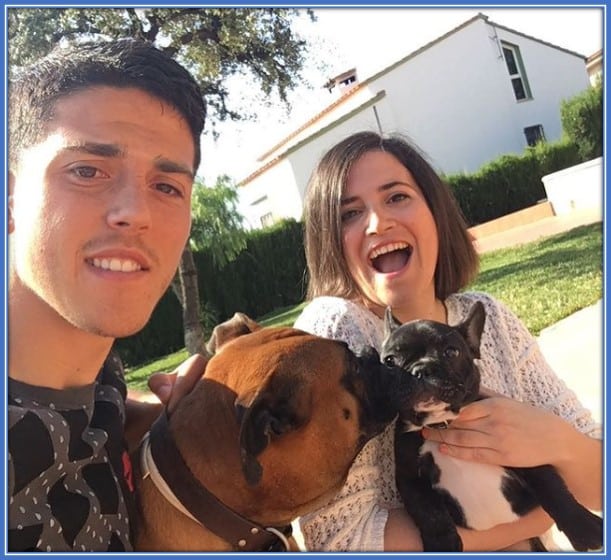 Aside from his immediate family members, Fornals has maintained a close relationship with his relatives.

For reasons best known to him, the prolific midfielder has taken a liking to one of his cute little cousin who is seen here. 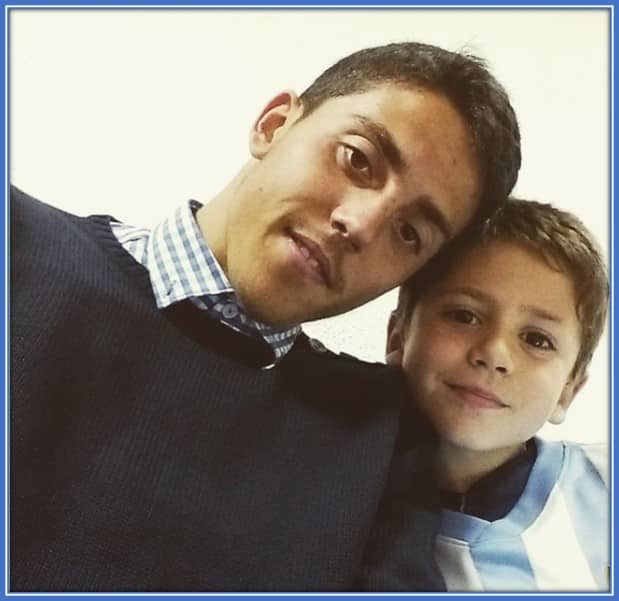 As part of fulfilling family duties, Fornals is generous enough to spend quality moments with his grandfather and grandmother. Pablo understands that the best luxury he could gift his grandparents is to bond with them. 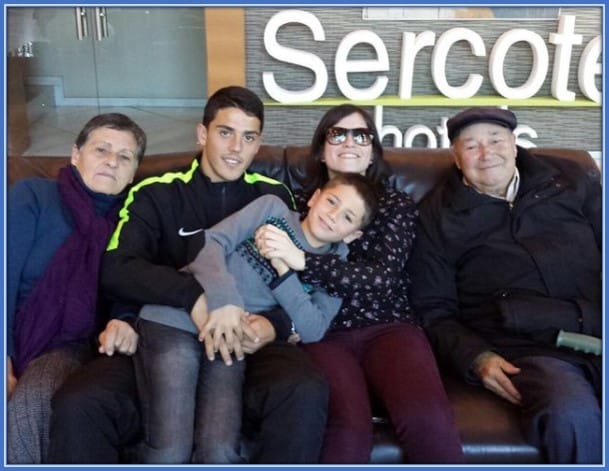 To wrap up the Life Story of the playmaker, here are a few realities that would help you get a full understanding of his Bio.

Fact #1: He once Fainted during Training:

During his career days at Villareal, his teammates once rushed Pablo Fornals to the hospital after he fainted on the training ground.

His Medical report showed he suffered an attack of hypoglycaemia (low blood sugar level). However, after adequate medications, the midfielder recovered and continued to focus on his soccer endeavour.

Fact #2: Salary Break Down and Earnings Per Seconds:

Fornals he has gone from receiving little stipends to earning in millions. Interestingly, Pablo Fornals annual salary of £3.5 Million has graced him with the ability to carter for the need of his family. Here is a simplified breakdown of his salary at West Ham.

Since you started viewing Pablo Fornals’ Bio, this is what he has earned.

Like Marcos Llorente, Fornals and his girlfriend are cynophiles (dog lovers). Perhaps the ability of dogs to love without compromise are some qualities that have attracted the lovers to his pet. 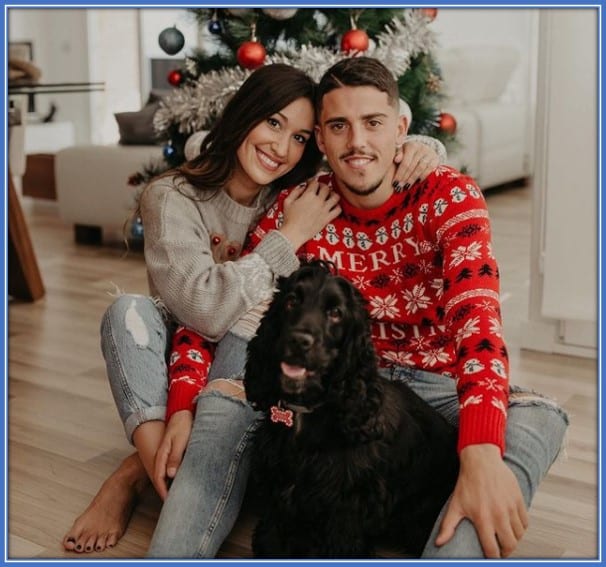 If he must measure up to the standard of Juan Bernat, he would have to work extra hard.

As I writing this Bio, Pablo Fornals has got a decent rating that shows he is set to eclipse Javier Hernández as a better forward for the Hammers. 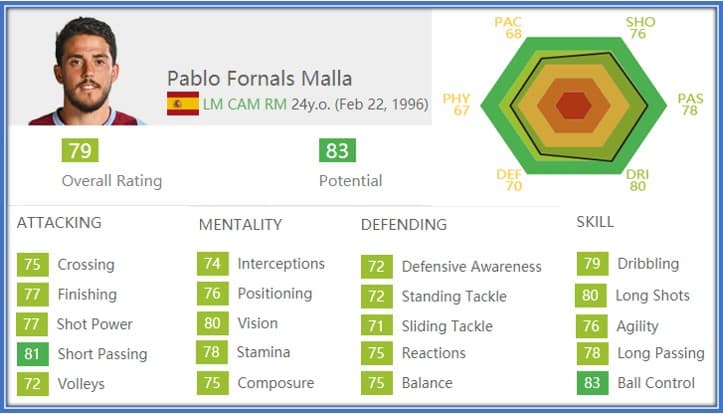 Fornals is one of West Ham’s unsung hero AKA the Raumdeuter of David Moyes’ armoury. No wonder defenders tremble on his hard-running, attacking flair. The Biography of Pablo Fornals makes us understand that Victory is always possible for those who make sacrifices and refuse to stop fighting.

Also, we commend Pablo Fornals’ family for helping him (the last born) grow in love and tranquillity. Without the insight of Fornal’s father, it may have been impossible for him to play football.

Funny enough, the talented prodigy often acclaims that he’s got two mothers (his mom and sister) who have made him the man he is today.

Even after making it big in football, the Spanish player did not forget his Origin. No wonder Fornals did make a donation to the General Hospital of his hometown in a feat to combat the Corona Virus outbreak. May God bless him more!

At Lifebogger, we strive toward entertaining you with football stories. Kindly, contact us if you find anything that seems inappropriate in our article. Otherwise, tell us in the comment section, what you think of the Spaniard. To get a quick summary of Pablo Fornals Bio, use our Wiki table.