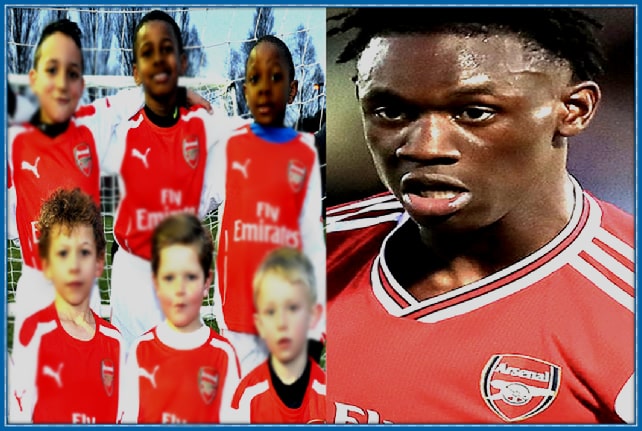 It is a concise presentation of the Footballers’ life journey, from his early days to when he became famous.

To whet your autobiography appetite, check out his boyhood to adult gallery — a perfect summary of Folarin Balogun’s Bio.

Yes, everyone knows he is one of the exciting prospects in North London. However, only a few people know the Life story of the Young Gun: Folarin Balogun. Without further ado, let’s begin.

For Biography starters, he bears the nickname “Balogunner”. Folarin Jerry Balogun was born on the 3rd day of July 2001 in the City of New York in the United States. He was born to non-American parents.

The forward’s parents were born in Nigeria. Also, research carried out to determine his family origins reveals that his Dad and Mum hail from western Nigeria.

Interestingly, they are of Yoruba speaking tribe, which is one of the three major ethnic groups in the West African country.

Although Folarin was born in a city (New York) that never sleeps, he spent most of his childhood growing up in England.

Folarin Balogun’s parents left the States when he was only two and made their new home in London, where Folarin grew up loving football.

Balogunner had a smooth sail through his formative years, thanks to having parents who wanted the best for him.

Their preference to stay in a more civilized first world nation like England testifies to their financial buoyancy and plans for their son’s future.

One of the plans which the striker’s parents had was to enrol him in a football academy. Having spotted his interest and prospects, they figured he would fare well as a sportsman.

Therefore, he was allowed to play for Sunday League side Aldersbrook. Thus began his first steps in competitive football.

By the time the lad was 10 years old, Arsenal spotted him while playing for Aldersbrook. The north London club quickly moved to sign him before rivals Tottenham would get him.

“While I having my Trial at Arsenal I kept in touch with Tottenham in case things go South.

Fortunately, the Gunners signed ME. I was happy and it was one of my life’s special moments.”

Being a gunner had been the youngster’s childhood dream. Therefore, he did his best to ensure that he lived every aspect of the dream which included a progressive rise through the club’s ranks.

At the peak of his rise, Balogun became popular as a goal-scoring machine. He began drawing comparisons to first-team superstar Pierre-Emerick Aubameyang and got his first professional contract in February 2019.

Upon making his debut in Arsenal’s 3-0 Europa victory over Dundalk in October, Balogun was very happy that he had achieved his childhood dream.

Although he didn’t score, he remarked that the debut was “a moment I have been waiting for.” The youngster’s journey in top-flight football has just begun.

With Aubameyang, Lacazette, and Nketiah plying their trade in the North America London club, Balogun would have to have to earn his place in the team’s attack squad.

Hopefully, he has a die-hard mentality and will achieve success, whether with the gunners or any other team. The rest, as they say, is history.

Who is Folarin Balogun Girlfriend and Wife to be?

Our boy is very much single at the time of putting up this article on his childhood story and biography. Therefore, it will probably take a while before we see him hanging out with any beauty that we can call his own.

Commendably, he is focussing on trying to improve and develop different ways of finishing. That’s a very wise decision if you ask us.

Upon scoring his first Arsenal goal against Molde in November, there were a set of people who were more than happy for the forward.

They are his family. We bring you facts about Folarin Balogun’s parents. Also, we will make facts about his siblings and relatives available here.

Balogunners dad and mom have been an integral part of his life and rise. They are assiduously working behind the scenes to ensure that he stays focused and establishes himself in the Premier League.

Given the speed at which Balogun is improving, it would not be long before his parents start granting interviews on how they raised him to be an amazing talent.

Balogunner could likely be the only child born to his parents. He had made no mention of a brother.

Neither has any girl/lady identified herself as his sister. Have you seen his siblings? Do well to tell us in the comment box.

Just like the player’s immediate family, there aren’t records of the striker’s grandparents. Similarly, neither are his uncles, aunts, cousins, nephews and nieces known as of the month of December 2020.

Who is our boy beyond being a genius that plays on the shoulder of the last defender?

Sit back as we bring you facts about his persona to help you get a complete picture of him. He is a happy-go-lucky chappy who knows how to balance ambition with the right attitude.

Though not big on smiling, Balogun is someone you would love to have an interesting conversation with.

In addition, his sense of humour precedes him, and so do his people skills. He loves working out and fancies taking long leisure walks.

Also, travelling and having a good time with family and friends are on the list of his interest and hobbies.

How much is our boy worth in 2020? His net worth is under review. However, it is an open secret that he earns about £4,532.72 weekly. The 19-year-old must have acquired a driving licence to drive himself to train in a fancy car.

In addition, he can afford a fancy house or apartment for himself with such a weekly payout. In summary, there is nothing stopping Balogunner from living a luxurious lifestyle, except he chose not to.

Congrats, you made it this far. To wrap up this engaging article, here are facts you need to know about the youngster.

Salary and Earnings Per Seconds:

Since you started viewing Folarin Balogun’s Bio, this is what he has earned.

Folarin Jerry Balogun might be big on religion or not. In fact, he keeps his beliefs to himself and has given no hint about whether he is a Christian or not. However, time shall reveal what he stands for in matters of faith.

Never has injustice been so glaring as it is in Balogun’s ratings. Can you imagine that he has an overall rating of 60 points with a potential of 80?

That sure doesn’t reflect the real-life capability of a great finisher who is compared to the likes of Youssoufa Moukoko. Fortunately, he is up for an upgrade considering his recent performances.

Did you know that Balogun is eligible to represent three countries? They are the USA and England.

Also, he can represent Nigeria. However, chances are he is going to represent England due to better opportunities and incentives.

Thanks for reading this informative piece on Folarin Balogun’s childhood story and biography. We hope it has inspired you to do and stand for what you love. Just like Balogun strove to join Arsenal, a club he dearly loved.

So far Balogun keeps playing for the Gunners. He would effortlessly keep the hype train at full steam ahead.

He is where he loves, and he is being loved. It behoves us now to commend the striker’s parents for their support of his career in words and deeds.

At Lifebogger, we take pride in delivering childhood stories and biography facts of Footballers of Nigerian origin. If you see anything that doesn’t look right, do well to leave a comment or contact us.

For a quick summary of the Footballers’ Biography, kindly use our Wiki table.