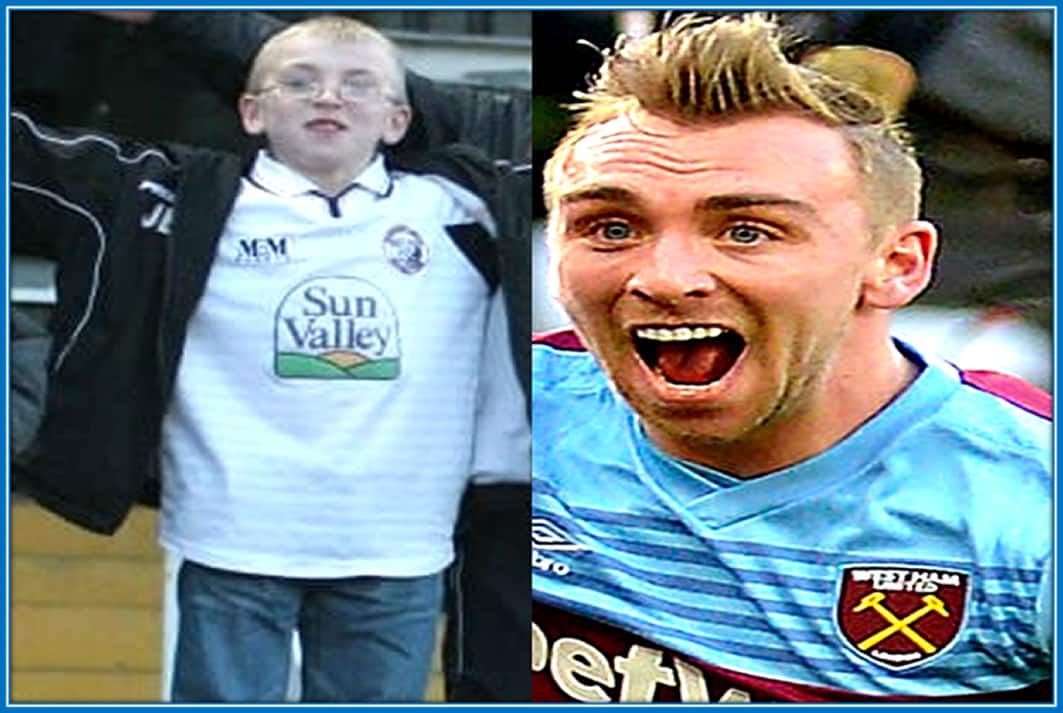 Our Biography of Jarrod Bowen tells you Facts on his Childhood Story, Early Life, Parents, Family, Girlfriend/wife to be, Lifestyle, Net Worth and Personal Life.

It is a concise presentation of his journey from his post-cradle years to when he became successful.

To give you a taste of the engaging nature of the memoir, here is a gallery showing his boyhood to fame — a clear summary of Jarrod Bowen’s Bio.

Yes, everyone knows he is a Technical dribbler like Jude Bellingham, one who has used his balance to flourish in an adapted West Ham role.

Despite the praise, we realize that only a few persons get to read Bowen’s life story. We have it all prepared for you, and without further ado, let’s begin.

For Biography starters, he bears the nickname “Bocross”. Jarrod Bowen was born on the 20th day of December 1996 to his father, Sam and little known mother at the town of Leominster in Herefordshire, England.

The English professional footballer is one among three children (two sons and a daughter) born of the union between his parents — a look-alike Dad and a beautiful mum.

The son of Sam Bowen grew up in Leominster, which is just 12 miles from Hereford. Little Jarrod was only three years old when he began playing soccer.

Back then, he was used to watching football on TV and then going to his family garden to reproduce some tricks. The truth is, Jarrod’s life from the onset has been soccer or nothing.

There are a few things that can be deduced from the forward’s interview. One of such things is that he had a comfortable childhood.

Although, his family background was more rugby than soccer and his parents didn’t have qualms about letting him practice soccer.

His happiness and giving him the best of a middle-class upbringing was all Sam and his wife cared for.

Are you aware that the Leominster native birth town is close to Wales? More interestingly, his parents had him bear the first name Bowen, which is Welsh.

Despite the Cymru link, Jarrod Bowen’s family roots is English through and through.

By the time the then soccer enthusiast was 10 years old, he was enrolled in Hereford United as a schoolboy.

Did you aware?… The enrollment came after he had unsuccessful trials with Aston Villa. The club didn’t have faith in him – maybe because Jarrod with his glasses didn’t look like a footballer of their kind.

At the peak of his career with Hereford United, he was AGAIN released by the club. The release had nothing to do with Bowen’s performance but managerial instability within the club’s ranks.

Thus, Bowen went to Cardiff City for trials, a development that brought another blow to his family. Truth is, he suffered another rejection. Speaking about the experience, he once said;

“My dad received the call of my rejection from Cardiff City and it made me cry. I didn’t know what would become of my future.

I wasn’t really good with the school as all I had hoped for was to be a footballer.”

Fortunately for Bocross, Hereford got a restart, and they came requesting for his services – a feat which brought joy to his household.

A determined Jarrod broke into the Bulls’ first team in 2014, helping them avoid relegation and even winning individual honours.

However, the club again got sunk in another financial crisis which led to its expulsion from football. Lucky for Bowen, he was already a professional, a development which made his transfer to Hull City in 2014 seamless.

At the time West Ham came seeking his signature in January 2020, there was one question on everyone’s lips.

Would he cope with David Moyes’ style of football? Fears of relegation were rife at that time, and the manager needed his strikers to be the first line of defence.

Interestingly, many didn’t have faith in the forward’s ability to be adaptable.

This begs the question, How has West Ham’s Jarrod Bowen adjusted to David Moyes’ system? The striker used to enjoy free-scoring form in the championship.

However, he saw himself being forced to adapt to a defensive discipline to keep the Hammers in the Premier League.

Thus, he sacrificed a lot of dribbling for a selfless role and the Hammers avoided relegation. At the time of updating Jarrod Bowen’s Bio, he alongside James Justin had just received a Three Lions call-up. The rest, as they say, is history.

Who is Jarrod Bowen’s Girlfriend?

You may not see photos of our boy with a lady yet, neither has he said anything about a special someone in his life. Notwithstanding, he is old enough to have a girlfriend.

Most importantly, he plies his trade in a league whose fans place a premium on stars with girlfriends. Thus, it would only be a matter of time before he secures one for himself.

Our boy was – like all humans – born of a woman. He has a dad with siblings and a wider set of close kith and kins.

They are collectively referred to as his family. We bring you facts about Jarrod Bowen’s parents. Also, we will outline facts about his siblings and relatives here.

Sam is Dad to the footballer. He was also a professional soccer star but had a less illustrious career. Notwithstanding, Bowen holds him in high esteem.

The striker’s recent interview – titled Harry Redknapp wanted to sign my Dad for West Ham! – speaks volumes of how Sam’s exploits in non-league ranks made him pop on the radar of West Ham, but he didn’t get signed.

Fortunately, Bowen is living Sam’s dream and the sporting father is happy to watch him make appearances in London Stadium.

Like Sam, the forward’s mom has a huge effect on his childhood life and rise. She joins her husband to keep track of their son’s progress in East London and ensure that he keeps the family interests in the sport alive.

Are you aware that the English forward has a brother called Harry? He also has a younger sister whose name must be something sweet. The siblings must be super proud of him and all that he does in East London.

Away from the English man’s immediate family life, there aren’t records of his ancestry. Like our esteemed audience, we are curious to find out whether Bocross’ maternal and paternal grandparents were soccer geniuses like him.

Do his uncles and aunts love the sport? Then he must have a cousin making waves somewhere right. Maybe yes or no. There are too many curiosities we want to satisfy, even though we are not in a hurry to identify his nephews and nieces yet.

Change as they say is constant, but our boy has proven to be an exception. Bowen has – attitude-wise – remained who he is from his days in conference football to top flight.

He is humble, down to earth and accommodating. He believes in always moving forward regardless of the cost, a mentality that reflects in his incredible workout techniques.

Are you aware that Jarrod Bowen dragged tractor tyres across a field to bulk up to succeed as a forward?  Such is how much the forward desires success and would stop at nothing to be on top of his game.

Although we’ve not caught him having fun outside football, he strikes us like someone who loves music. Swimming and hanging out with friends must be a part of his hobbies. Also, vacationing should be on the list of his interests.

The forward is new to top-flight soccer likewise his net worth of 4 Million Euro! There is not much he can do with an annual salary of £5,000,000.

This explains why his Instagram photos are devoid of the flashy lifestyle characterised by cruising in exotic cars and lounging in big houses.

To wrap up this article on the player’s childhood story and biography, here are few truths about him:

Fact #1- Salary and Earnings Per Seconds:

Since you started viewing Jarrod Bowen’s Bio, this is what he has earned.

Footballers are big on keeping mum about their disposition to matters of faith. Therefore, it is difficult to figure out if they are believers or not. In Jarrod Bowen’s case, we are confident that he is a believer and most likely a Christian.

It’s outrageous to note that FIFA gave a low rating to a star that is unstoppable in the attack. Similar to Joe Rondon, how do we reconcile the fact that a forward with such amazing traits has an overall rating of just 77 with a potential of 84?

It just doesn’t add up for a footballer famed for saving clubs from relegation.

Thanks for reading this informative piece on Jarrod Bowen’s childhood story and biography. We hope it has inspired you to believe that the darkest moment is just before dawn.

Just like Bowen thought he had lost all hopes until Hereford recalled and gave him a life-changing contract.

It behoves us now to commend the forward’s parents unflinching support to his career. Their faith in him never wavered, even when it seemed Bowen no longer had a future in soccer.

Today, he sure knows how to put games in bed and his family members are proud to see their own being dubbed the English Arjen Robben.

At Lifebogger, we take pride in delivering childhood stories and biography facts with accuracy and fairness. In case you see anything that doesn’t look right, do well to contact us or leave a message below.

For quick answers to your Biographical Inquiries, use our table as it summarizes Jarrod Bowen’s profile.