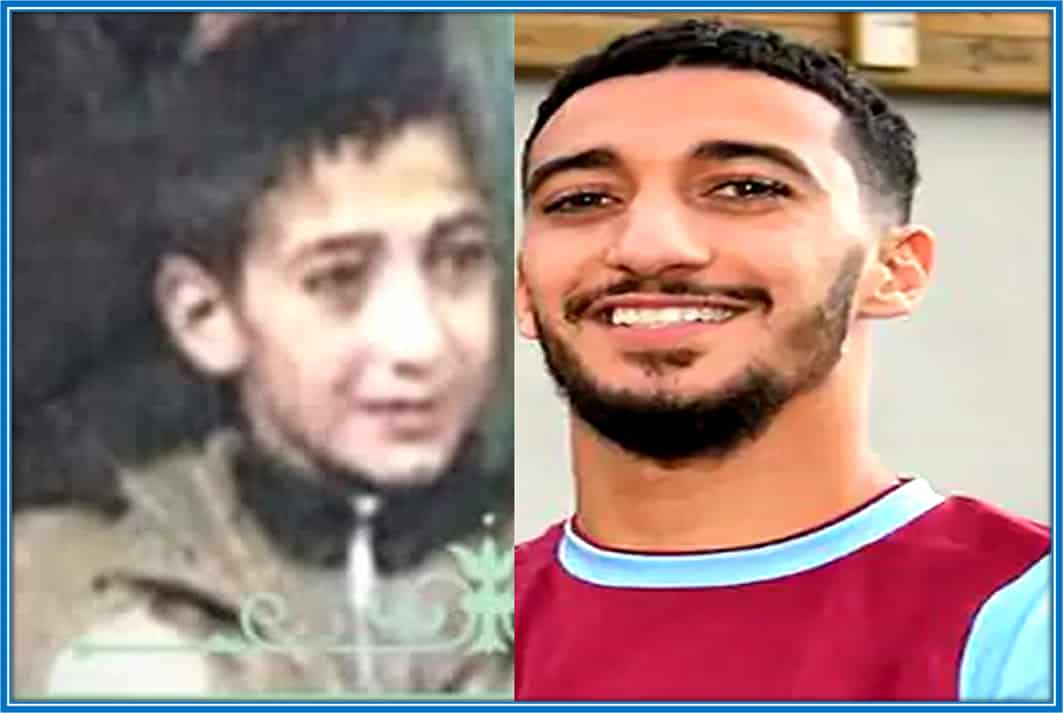 Our Said Benrahma Biography tells you Facts on his Childhood Story, Early Life, Parents, Family, Girlfriend/Wife to be, Net Worth, Lifestyle and Personal Life.

In a nutshell, we present you the complete Life Story of the Algerian. It starts from his early days, to when he became famous. To whet your autobiography appetite, here is a summary of Said Benrahma’s Bio — it does tell a story.

As theGuardian puts it, the footballer could nutmeg a mermaid. Yes, that is true. You and I know Said Benrahma for his playmaking skills. However, since West Ham signed Algeria winger from Brentford, the quest to know his life story has soared. No worries, we’re here to break down his Memoir. Without further ado, let’s begin. 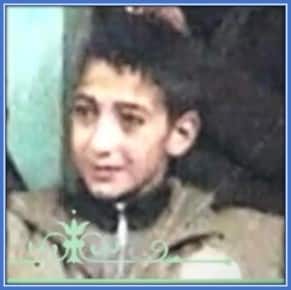 For biography starters, he bears the nickname is ‘the Algerian Messi’. Mohamed Said Benrahma was born on the 10th day of August 1995 (now 25 years and 9 months old) to his parents at Ain Temouchent, a city in Algeria. The Algerian is one of the numerous children born of the union between his mother and late father.

As a little boy, Said often took part in playing street football with his Childhood friends. Of course, Algerians of that generation were known for their love for football. In case you aren’t aware, many of them inherited the passion from Zinedine Zidane — a legend who has his ancestry from the North African country.

The future AFCON Star was raised in Sidi Bel Abbes — in a rich household. Said Benrahma’s parents were wealthy enough to sponsor their family members to France including Said — when he was 11. Unlike Yacine Aldi (a fellow brother of Algerian descent), Benrahma started life in France during his teen.

No doubt, you can possibly guess he hails from an Islamic Family Background. As culture demands during his upbringing, the footballer’s dad and mom instilled in him, the morality of a true Muslim.

Yes, everyone can guess he hails from North Africa. However, what is not known is the part of Algeria Benrahma’s family comes from. Truth is, his household have their roots from Sidi Bel Abbes — located in the in North-West part of the country. As observed from the map, Said’s Algerian hometown is very close to Morroco and Spain. 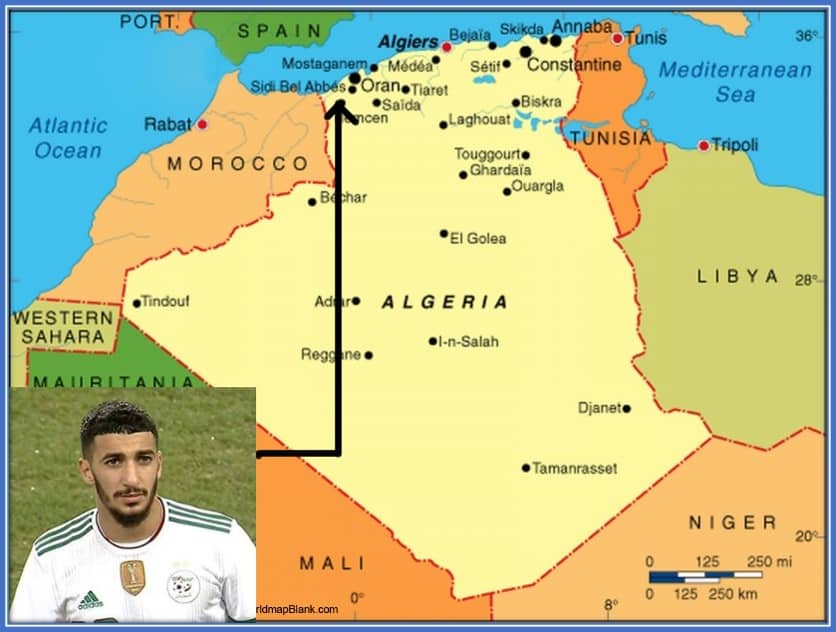 Additionally, the forward’s origin has an ethnic group comprising of people who speak the Algerian Arabic language. For the purpose of clarity, here is a map which explains to you, Said Benrahma’s family origin. 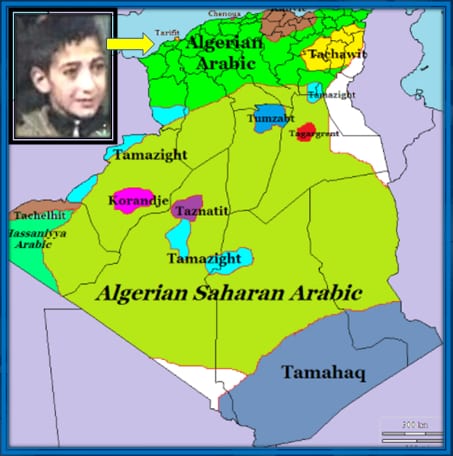 Said Benrahma Career Story – How it all started:

Before his Family’s move to France, the Algerian Messi had it in mind to become a professional. Being aware that laying a solid foundation was necessary, Said Benrahma’s parents enrolled their son at NRB Bethioua (located in Algeria) when he was 9.

Upon their arrival in Toulouse, France, Said Benrahma joined Balma SC to advance his experience in football. Seeing that he wasn’t achieving what he had wanted, the young lad sought his parents’ advice and soon moved to Colomiers in 2011.

After two years of rigorous training, the talented winger sought to join a more competitive club. Did you know?… it was Said Benrahma’s sisters who engineered him to consider joining OGC Nice, a French professional football club based in Nice.

Thanks to his past track record, Benrahma got accepted by Nice in 2013. Just a few months into joining the Ligue 1 club, the Algerian Messi proved his worth to the then manager, Claude Puel, during their training sessions. Hence, he got the privilege of making his professional debuts with Nice in 2013. 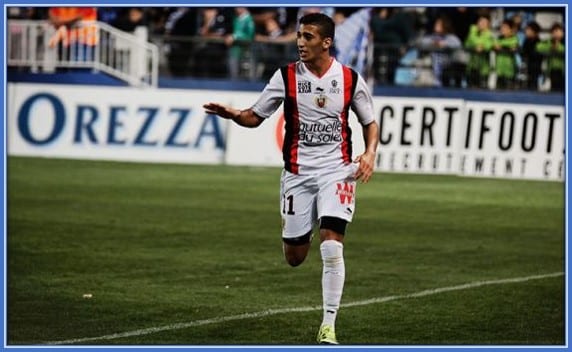 Moving progressively, Benrahma did put his skills into use for his club as he played in their reserved team. Thankfully, the gamble he and his parents took on his career path was finally paying off.

As we all know, it is not easy for young players with prospects to get a guaranteed first-team opportunity for a big club. This happened for Benrahma, and the poor lad paid his dues by going on loan at several clubs.

Sadly, the many loan spells involved receiving too many rules adopted by all the clubs he joined. The god of football heard his cries in 2017 as Benrahma saw himself joining Brentford from OGC Nice — who offered him a first-team opportunity and start. 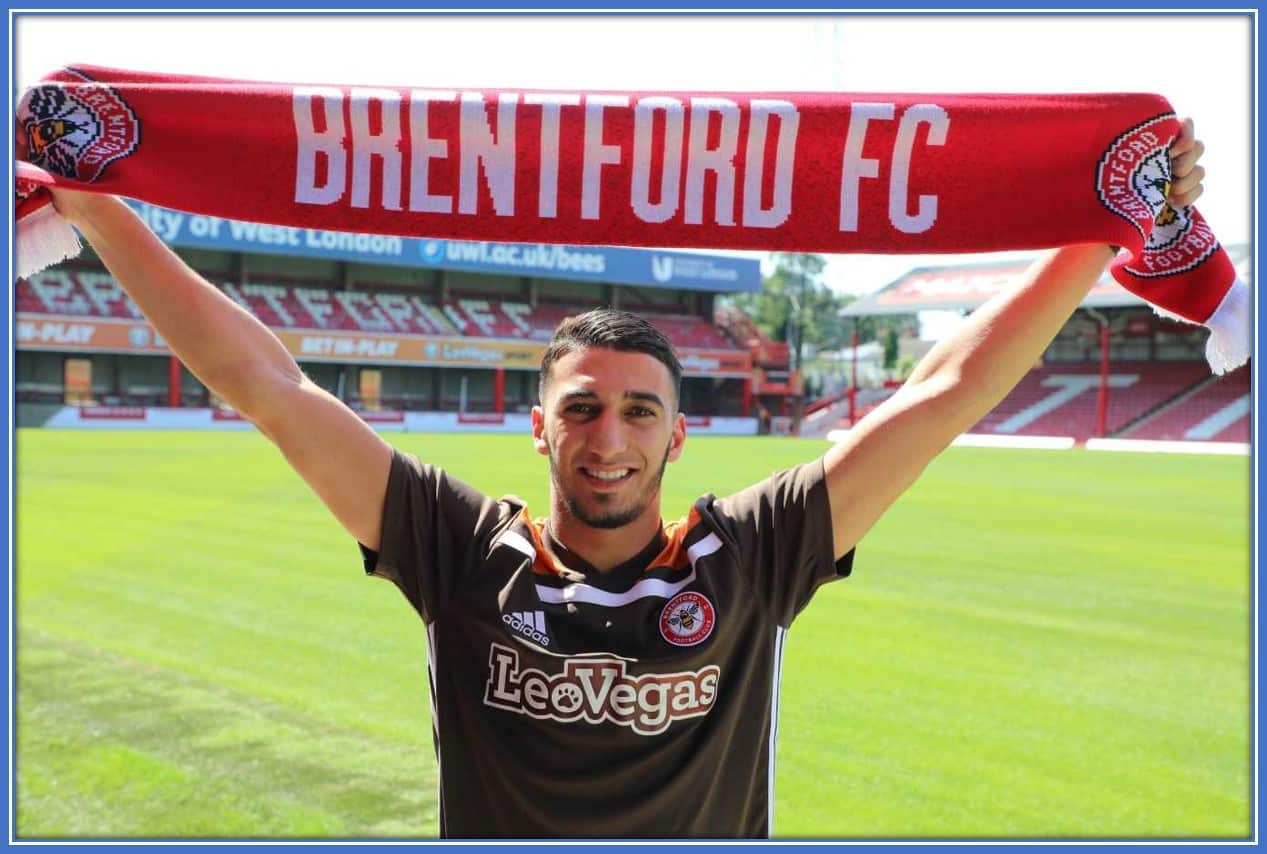 Displaying an unmatched level of football prowess at Brentford made his country (Algeria) go on their knees to represent them at the national level. Did you know?… Said was among those who played alongside Riyad Mahrez — helping Algeria to win the 2019 African Cup of Nations. 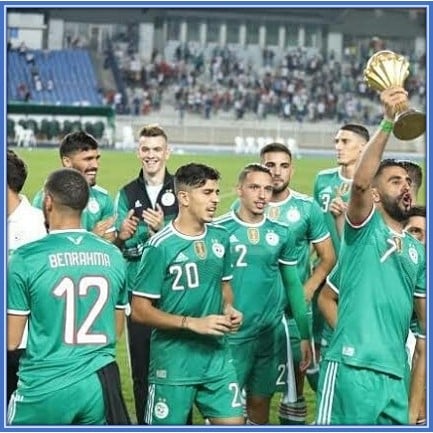 In the space of two years, Benrahma puts on a magnificent performance at Brentford. This impressive feat saw many clubs going down on their knees for his signature. Even Fans weren’t left out. As Said puts it, ‘regularly people would ask me to sign for their club‘ This shows how much he is super loved.

Among top clubs, it was Leicester and Newcastle who first began his transfer battle. Sadly, none of these top clubs could get him. Top 6 teams like Arsenal later joined Leceister in the transfer battle. Still, non could still get the super Algerian.

The pursue continued. It got to a point that Benrama’s transfer saga began bearing different nicknames like; the BENRAHMA DRAMA, of which Chelsea and Leeds went to war (head to head) over the North African superstar.

After so much fight, a winner finally emerged. It was West Ham United’s David Moyes who finally won Said’s heart as he signed him in October 2020. 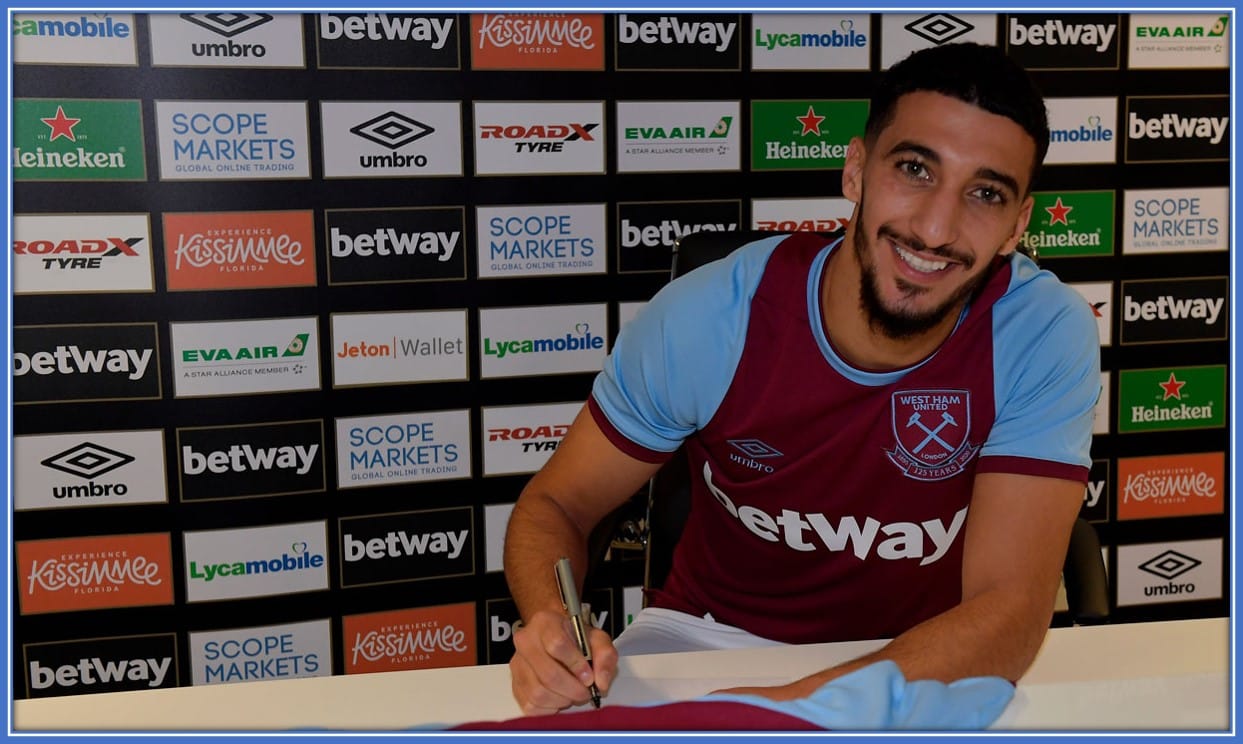 Partially debuting in the EPL in a match against Liverpool gave a glimpse of why David Moyes should hand him his full West Ham debut subsequently. The cry for a full debut began coming from his supporters, mostly Algerians via social media handles (mainly FaceBook). The long-awaited time finally came and he did well.

No doubt, Said Benrahma’s parents and his big family members at large are praying that he becomes as successful as Samir Nasri in the EPL. The video below will make you wish your club had Benrahma in their team. The rest, as they always say, is history.

Who is Said Benrahma’s Girlfriend and Wife to be?

As a principled player, the Algerian Messi has tried as much as possible to keep his relationship life private. However, we can’t deny the fact that some of his female fans had fantasised on the possibility of becoming his girlfriend or future wife — owing that his handsomeness knows no bound. 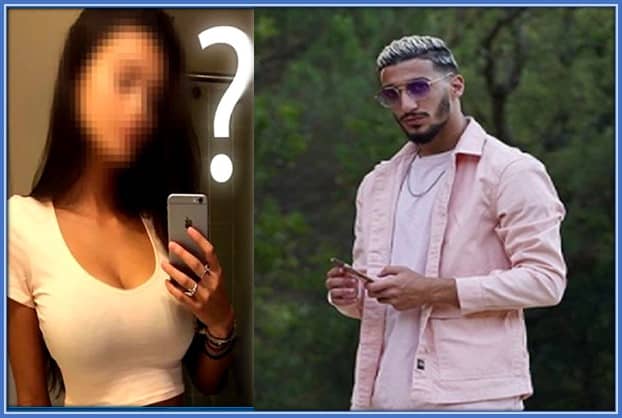 Seeing that he does not desire to live as a celibate, we are certain that his family is waiting for him to introduce them to the love of his life. After thoroughly researching his love life, we finally found something — a clue to his girlfriend or wife to be. Our team found a picture of Benrahma with a gorgeous lady. The big question is; could she be his girlfriend or fiancee? 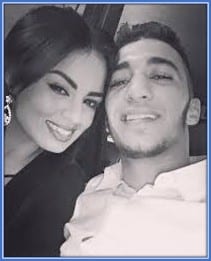 At the course of his career, the prolific Algerian player has displayed some qualities that best describe his personality. The Truth is, Said Benrahma has got a great sense of humour. In fact, he strikes people as someone who doesn’t seek the limelight but prefers he let football do the talking.

What’s more?… His ability to inspire others and his level of optimism has placed him at the centre of attention for some of his teammates. As a way of killing boredom, Benrahma often loves to swim. Sometimes, he takes a long walk on water just to relieve stress. 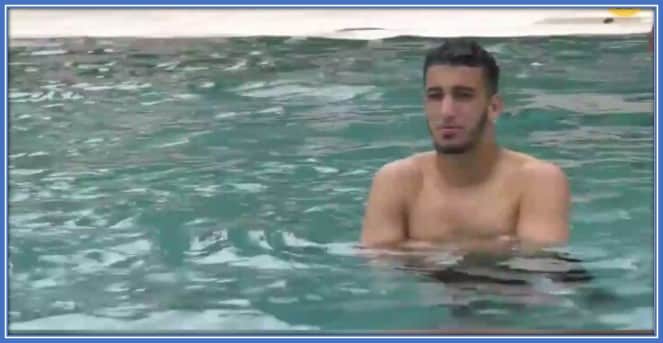 First and foremost, he’s got a great test in fashion. No doubts, Said Benrahma is quite a good dresser. Over time, his pictures on Instagram has portrayed him as a person who loves to be addressed by the cool way he dresses. 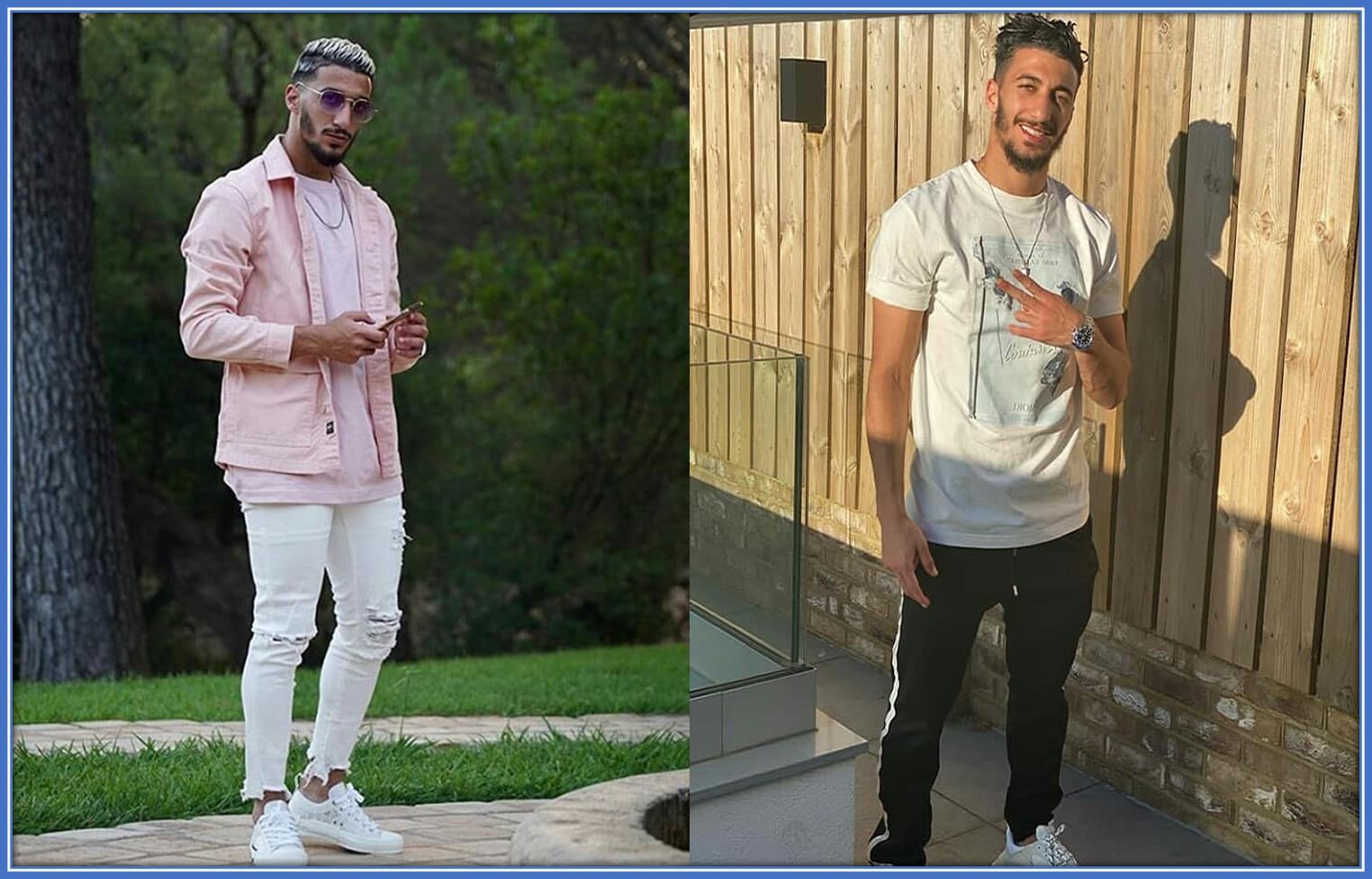 Researching about his finances, we find out he earns massively at West Ham United. Surprising, Benrahma pockets an estimated annual Salary of £1,083,219. His earnings have placed his Net Worth at about £2 million at the time of writing this Bio.

Apparently, his financial proceedings have enabled him to afford a luxurious house and some exotic cars. Although he has no problem flaunting his beautiful rides on social media. Not to forget, we have hardly seen a glimpse of Benrahma’s House. 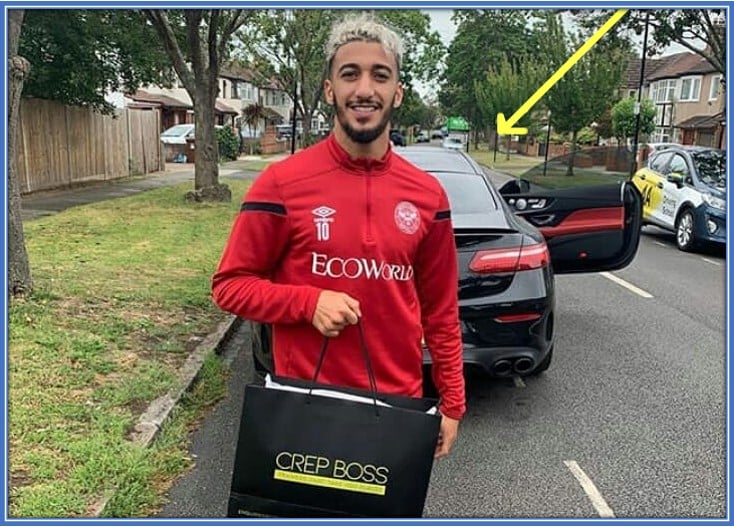 Throughout his Life Story, the Algerian Messi has always enjoyed the support of his household. In this section, we present you detailed information about members of Family, starting with his dad.

On several occasions, the talented winger has strived for success to make his late dad proud. Unfortunately, Benrahma’s father lost his life to the cold hands of death in January 2020. Sadly, Said could not stop tears from rolling down his eyes at the time he paid a visit to his dad on his deathbed. 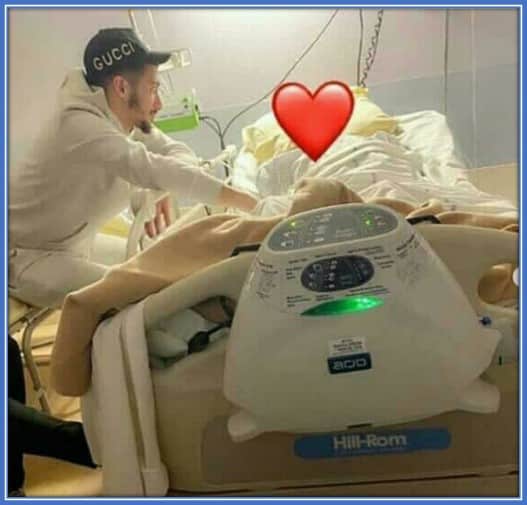 We can not overemphasise the role of his mom in his upbringing. Even though Benrahma has not mentioned his mother’s name, he has shown that she holds a special place in his life. He even brought her to West Ham Stadium when he joined the Premier League club. 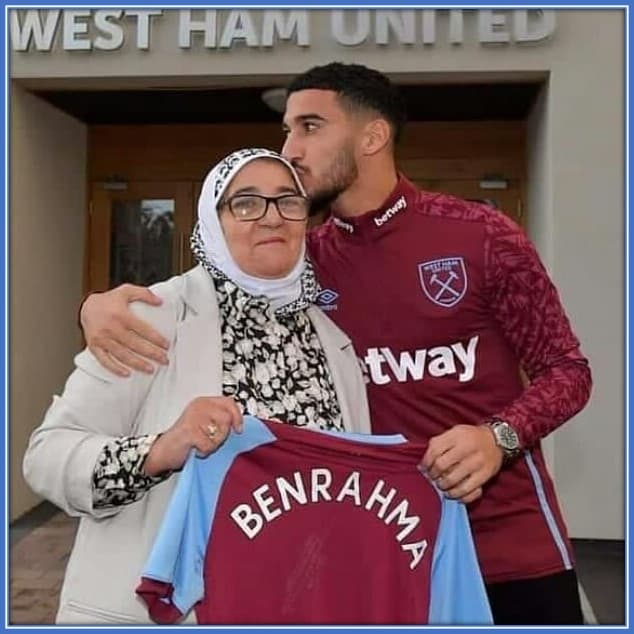 Research shows that the Algerian player has got an unidentified number of sisters. What’s more?… Benrahma has developed a habit of calling his best friend ‘brother’. Actually, he and his friends have gone through a lot of challenges since they were kids. In fact, they have always shared their pictures on Instagram. 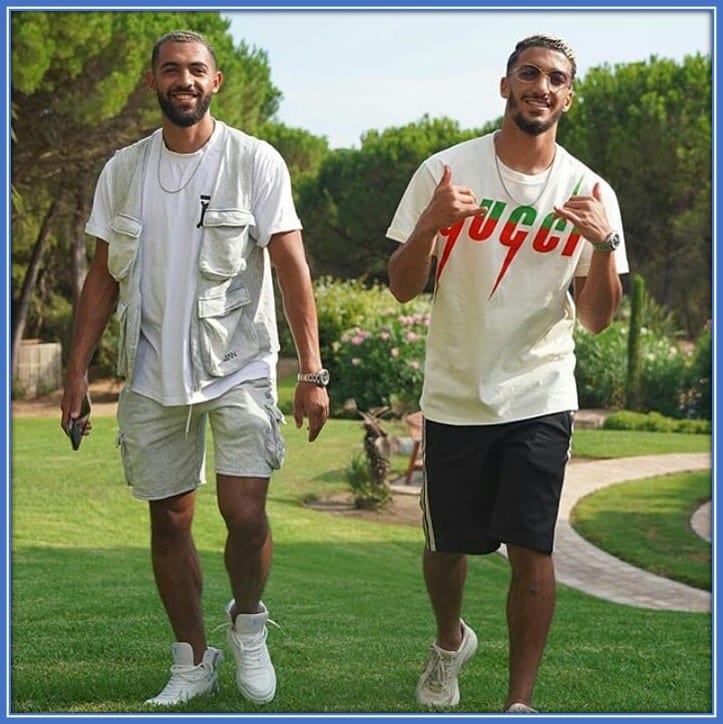 Moving on to his ancestry, there has been no information about his grandfather or grandmother. Notwithstanding, we are confident that Benrahma’s uncles and aunts are proud of his achievements wherever they may be.

To round up our Life Story of the Algerian Messi, here are some exciting realities that would help you get a grasp of his Biography.

Fact #1: He earns Millions when you calculate his Salary in Algerian Dinar:

Interestingly, his £20,799 weekly wages will easily make him a millionaire in his home country – Algeria. If you convert his salary to the Algerian Dinar, he would make approximately 3.5 million DZD per week. An average Algerian citizen would have to work for one and a half years to make what Benrahma earns in a week.

We’ve strategically put up an analysis of Said Benrahma’s earnings as the clock ticks. See for yourself how much he has earned since you came here.

Since you started viewing Said Benrahma’s Bio, this is what he has earned.

Being born in a country whose population comprises 98.2% Muslims means that he has high chances of practising Islam. Of course, our speculations are correct because Benrahma has taken to his Instagram to post a picture of him dressed in his religious attires. No doubt, Said Benrahma is not ashamed to be a Muslim. 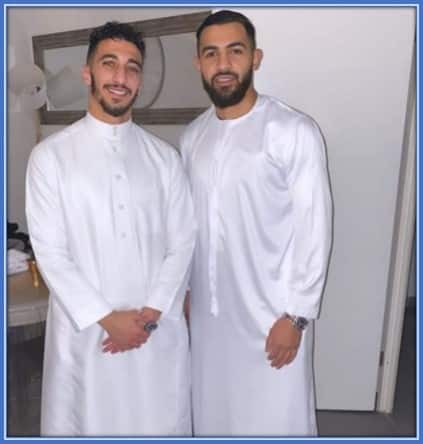 From his football analysis, Benrahma has a better dribbling potential than Yacine Adli. Also, his agility and acceleration are phenomenal. Hence, he could quickly dribble into opponents half and still keep the ball possession. 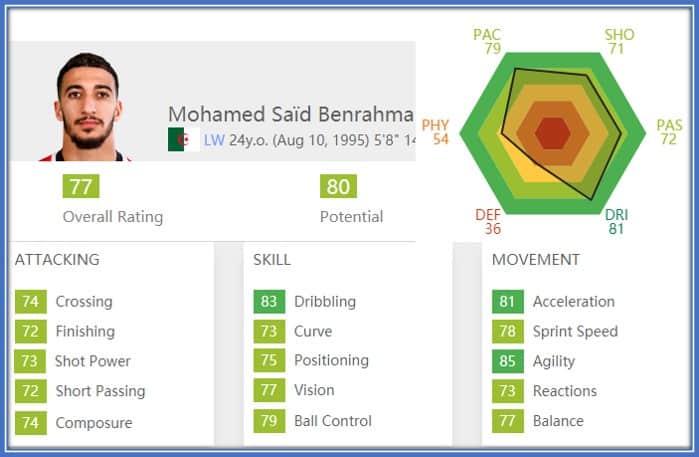 No doubt, Algerian Football Players playing abroad have made their country proud. One sweet thing we observe is that — all its footballers believe like they come from one big family.

Sadly, it would be impossible for anyone to fill the void left by one of Said Benrahma’s parents – his late father. Our best wishes are with his family (especially his mother and siblings). We hope they get to live a vibrant life devoid of solitude owing to the death of the family’s head.

Thank you for reading our concise Bio of Said Benrahma. Always know that Lifebogger strives towards satisfying your curiosity with legit Childhood Stories and Biography Facts of footballers. Kindly share with us your thoughts about Said Benrahma in the comment section below.