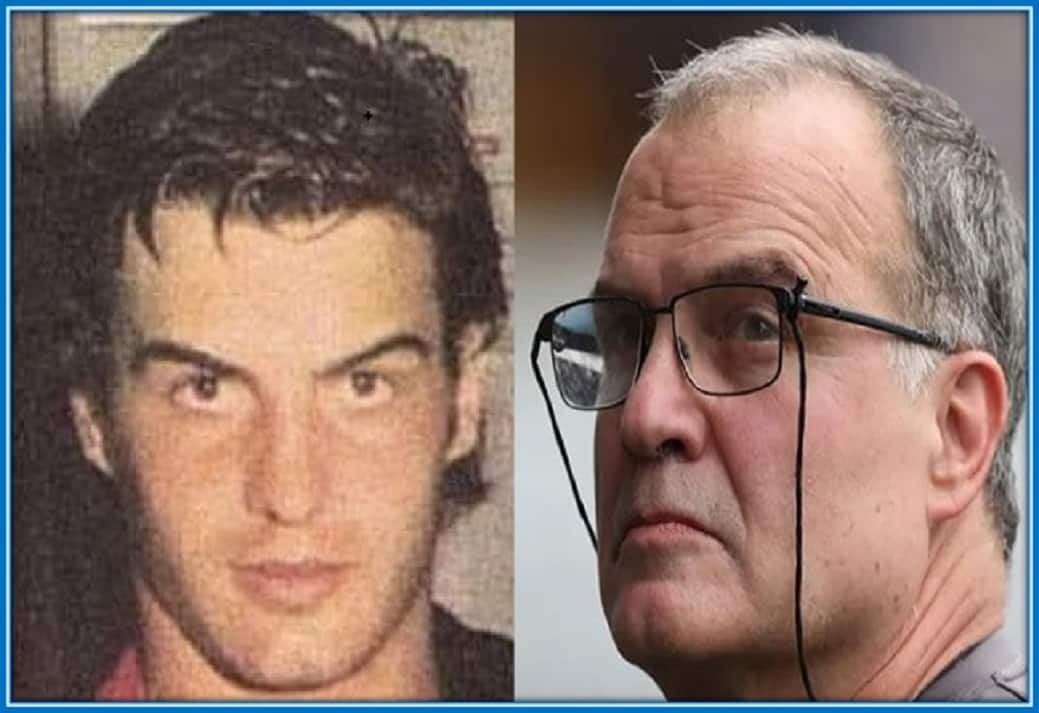 In a nutshell, we portray the history of the Argentinian professional football manager. Lifebogger begins from his early days to when he became the role model of some of the world’s best football managers.

To give you a taste of the engaging nature of Marcelo Bielsa’s Bio, here is a pictorial summary of his life. It is a perfect introduction to the Life journey of the Rosario native, one of football’s greatest managers.

As football fans, you and I know he is one of the most respected managers in football history. This is a man who discovered Mauricio Pochetino (as a footballer) and who great managers the likes of Pep Guardiola idolize.

Despite the great things the Argentine coach has done to football as a game, we realize a gap. The truth is, not many soccer fans have read a detailed version of Marcelo Bielsa’s biography, which is very interesting. Now, without further ado, let’s proceed with his early life.

For starters, the football manager is nicknamed “EL Loco”.

Marcelo Alberto Bielsa Caldera was born on the 21st day of July 1955 to his mother, Lidia Caldera and father, Rafael Pedro Bielsa in the city of Rosario in Argentina. He is one of three children born out of the successful union between his parents.

Young “El Loco”, as he is often called, grew up in the city of Rosario alongside his siblings- an older brother, Rafael and a sister named María Eugenia.

Spending his early years in the city, young Bielsa was a studious kid who had the capability to read a book a day.

As he grew older, Marcelo Bielsa’s passion for books slowly metamorphosed into perusals of more than 40 sports magazines for which he obtained subscriptions for.

The then Youngster acquired his passion for reading from his grandfather, who is said to have over 30,000 books in his own personal library.

On their part, Marcelo Bielsa’s parents were happy to support his early quest for knowledge and interest in sports for many reasons.

Notable among the reasons was the fact that Marcelo Bielsa’s parents had excellent careers. The football manager came from a well-to-do home as his mother was a teacher and his father was a lawyer.

It didn’t end there… Both dad and mum were die-hard fans of the local club Rosario Central.

For those who are not aware, the coach is a bonafide citizen of Argentina. Results of research carried out to determine Marcelo Bielsa’s family origin reveal that he belongs to the Argentine white ethnicity.

As observed, this ethnic group dominates the eastern part of the country.

Being born into a family that has a rich history in Law and Politics, a young “El Loco” made the decision to break tradition.

To that end, he dedicated his life to football. The then youngster began playing the sport from a very young age and became actively engaged in it at the age of 15 (1970) when he began training with Newell Old Boy’s club.

While at Newell Old Boys, Bielsa did struggle a lot to rise through the club ranks because he wasn’t a natural player.

Although the struggling footballer made it up to the club’s first team, he couldn’t establish himself in it. Thus he left the club in 1978 and dropped down through the leagues.

It wasn’t long before the young footballer gave up on his football career and made the decision to delve into coaching.

He began his coaching career in 1980 as the head coach of Newell’s Old Boys School’s Youth Division. Thereafter, he went on to manage several football clubs in the next decade.

The turning point of the manager’s career came in 2004 when he saw the national team of Argentina win Gold during the 2004 Olympics.

With the victory, Argentina became the first Latin American team to win the Olympic title in football since 1928.

Bielsa went on to manage Chile’s national side and did well to earn a hero-like status for drastically improving the team’s performance.

Notable among such improvements was Chile’s qualification for the 2010 World Cup. However, they didn’t get past the round of 16. No thanks to a defeat from Brazil.

When the fast-rising coach took up the job of managing the Spanish club, Athletic Bilbao in 2011, many were eager to see if he could replicate his success with national teams in competitive club leagues.

To their amazement, Bielsa saw the Spanish club to the finals of the UEFA Europa League and Copa Del Rey in his first Season. Neither was Bielsa a failure with managing Marseille, Lazio and Lille between 2004 and 2007.

At the peak of his career success, Bielsa took up the management of Championship club Leeds United in 2018 and led them to promotion back to the Premier League in 2020.

The feat was particularly spectacular because the team was fraught with injuries and the promotion was Leed’s first ascension in 16 years!

Whichever way fortune tilts for Bielsa in the Premier League, the rest as they will be history.

Behind every successful manager is a woman and our profile of interest is not lacking in that department. Marcelo Bielsa has been in a Marital relationship with his wife Laura Bracalenti for over 30 years. Laura is an architect and an academic at the National University of Rosario.

She is a respected member of the academic community and has many publications in her name. Bielsa and Laura have two daughters together. They include Ines and Mercedes.

Inés has an interest in sports, particularly hockey. On the other hand, not much is documented about Mercedes, who is big on keeping her personal life private like other members of Bielsa’s family.

South American households love to proudly identify with their successful offshoots. The case is not any different for Marcelo Bielsa’s parents, his siblings and relatives. Now let’s introduce his dad.

First and foremost, the coach’s dad Rafael Pedro was a lawyer and lover of politics and football. Being a supporter of Rosario Central, he wasn’t happy that Bielsa became a player for rival club Newell Old Boys and even went on to coach the same club.

Rumour has it that Rafael never saw Bielsa play for and coach the team because of the rivalry. Away from the rivalry, both father and son had a good family relationship and have never spoken ill of each other.

Successful mums have given birth to legendary coaches, and Lidia Caldera isn’t an exception. The coach’s impressive mom has a rich history in the Argentine educational sector as a hardworking teacher.

Little wonder, Bielsa did once admit that his incredible work ethic is a trait that he did inherit from his mother. In his words;

“For her, no effort was sufficient,” he would later admit. “The influence of my mother as fundamental in my life.”

The family bond doesn’t end there, Marcelo Bielsa also credits his mym for buying him copies of Argentine sports magazine El Grafico which he would devour almost immediately, a development that helped him become a tactical thinker.

It goes without saying that Marcelo Bielsa’s parents did a lot to help him become who he is.

The coach indeed has influential siblings, an older brother and a sister. Marcelo Bielsa’s brother Rafael is into politics and did once serve as a minister of foreign relations under Argentine president Nestor Kirchner.
On the other hand, Marcelo Bielsa’s sister Rafael’s sister is an architect and also into politics as she did once serve as the vice-governor for Santa Fe.

Moving on to the manager’s extended family life, there are no available records of his ancestry. Data on his paternal grandparents, as well as maternal grandfather and grandmother, are scarce.
Similarly, not much is available about his uncles, aunts, cousins, nephews and nieces.

What does Marcelo Bielsa do outside Football?

Let’s move on to traits of the manager’s personality. Are you aware that they are similar to those of individuals born under the cancer zodiac sign?

They include his proclivity for ruthless competition and consistency. In addition, he possesses an assertive persona and exhibits eccentricity.

Regarding the manager’s interests and hobbies, he has quite a number of pastime activities that include taking a stroll, shopping, posing for photos with fans, reading and having good time with his family and friends.

Marcelo Bielsa’s Net Worth and Lifestyle:

Here, we walk you through how the football manager makes and spends his money. Did you know that Marcelo Bielsa has an estimated net worth of over $1 million at the time of writing?

The manager’s steady rising wealth has sources established in the wages and salaries that he receives for being a football manager.

However, Bielsa does live a conservative lifestyle which makes it difficult to track his spending habit.

As a result, little is available about the houses that he possesses. The same can be said of the cars which he uses to navigate the streets of West Yorkshire as Leeds new coach.

Our write-up about the manager will be incomplete if we fail to intimate you with these lesser facts about him.

Bielsa is a Catholic and a practising one at that. In fact, he once paid a visit to the Poor Clares of Guernica, Spain, alongside his wife in October 2011, asking them to pray for his then-team Athletico Bilbao.

Are you knowledgeable of the fact that Bielsa was influential to the rise of a number of managers?
They include Mauricio Pochetinno- whom he reportedly signed while sleeping, Pep Guardiola, who regards him as the greatest coach and Diego Simeone, who admires his technicality.

Not many fans lack the knowledge that Marcelo Bielsa’s nickname El Loco translates as – Mad Man.
He was given the nickname in view of his ruthless devotion to winning games and impulsive eccentricity whenever things don’t go as he planned.

It is amazing to note that Bielsa shares his birth date in 1955 with the advent of a number of technical events and the birth of techy personalities.
It was in 1955 that the first pocket transistors radio became available while the US began using the first Atomically generated power that same year.
Need we remind you that 1955 is the birth year of Bill Gates and Steve Jobs? Yes, we just did.

Although he is out of Leeds United, we computed the analysis of his earnings while he was with the club.

This is what Marcelo Bielsa

has earned with Leeds United since you began viewing this page.

Thanks for taking out time to read this engaging article about the life journey of one of the greatest managers in the world.

To sum up, Marcelo Bielsa’s biography has made us understand that consistency and determination are the bedrock of success.

At Lifebogger we pride ourselves on delivering memoirs (like that of Bielsa) with fairness and accuracy. Kindly leave a comment on your thoughts about the Argentine Manager.

It should also be noted that he is a man of integrity and honour.

One example being when he told Leeds United to allow the opposition to score after the opposition complained that a goal that Leeds had scored was ‘ungentlemanly’, and he did this despite the goal stemming from confusion after a clear attempted foul by the opposition.