Our Tomas Soucek Biography details his Childhood Story, Early Life, Parents, Love Life (Girlfriend, Wife), Family Facts, Personal Life and Lifestyle. In a nutshell, it is the complete analysis of his life story beginning from his early years to when he became a football star.

Yes, everyone knows he is an energetic midfielder with both defensive and attacking qualities. However, not many have read Tomas Soucek’s Biography which is quite insightful. Now without further ado, let’s begin.

For Life Story starters, the footballer just like Petr Čech hails from The Czech Republic. Tomas Soucek was born on the 27th day of February 1995 at the Czechia district town of Havlíčkův Brod. Little Tomas was born to parents whose names are yet unknown at the time of writing his biography. 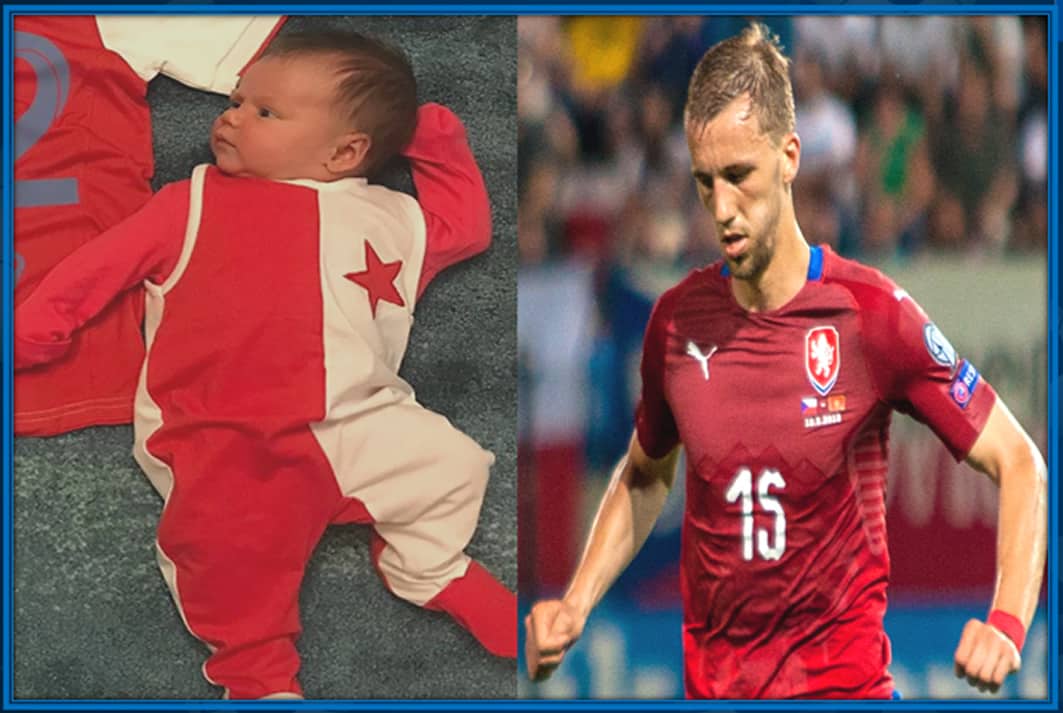 Thanks to the footballers looks, accent and last name, there are no questions or doubts about his nationality. In addition, the football genius’ family roots run very deep in his birth country – Czech Republic.

Did you know that young Soucek grew up at his birth town in Havlíčkův Brod? Growing up at the town, Soucek was a head taller than his peers. He was also big on running and playing football at a very young age.

It is worthwhile to note that Tomas Soucek’s parents were instrumental in helping him fall in love with running and playing football. In fact, Soucek’s little known mom was a professional marathon runner while his dad was a football enthusiast. Together, both parents gave Soucek a decent middle-class upbringing.

Asides sending the then youngster to a good school, Tomas Soucek’s parents were keen on ensuring that his bubbling energy and love for running found expression in training at local club – FC Slovan Havlíčkův Brod (2001-2004).

By the time Soucek was 10 years old, he began training with SK Slavia Praha. The club was many kilometres away from Havlíčkův Brod. No thanks to the distance, Soucek went to just two trainings and a match weekly. He later found a place at the football school and began training regularly.

It was at SK Slavia Praha that Soucek spent most years of his football career – almost a decade between 2004 and 2014 – perfecting skillsets that are now characteristic of his style of play.

When the time was right, the football prodigy clinched a major move to Slavia Prague where he made his league debut and got a taste of first-team football. However, he couldn’t solidify his position with the first team.

It was only a matter of time before Slavia Prague began sending Soucek on loan to other clubs. The first was Viktoria Žižkov where the young player didn’t make an impact before returning to his parent club.

In the 2016–17 season, Soucek lost his position with Slavia Prague’s first team and went on loan to Slovan Liberec during the winter transfer window. Although the stopper returned back his parent club on completion of the loan, the last was yet to be heard of his loan spells.

When Soucek joined relegation battling Premier League side West Ham on an initial loan deal in January 2020, his career suddenly began taking progressive leaps. Although the contract was Soucek’s first outside Czech republic, he was quick to adapt to English football and made a big impact in east London.

In no time he became a fan favourite and went on to help his side stay clear off the relegation zone by scoring and pulling off a number of key tackles. Fast forward to the time of writing, Tomas is seen by many fans as the new Pavel Nedved.

Football lovers can’t wait to have the defensive midfielder signed permanently to West Ham in view of the numerous times which he has given the club hopes of survival a major boost. The rest, as they say, is history.

About Tomas Soucek’s Girlfriend and kids:

Soucek is in a happy marital relationship with his girlfriend Natalia. Not much is known about when the lovebirds began dating. However, they have sure been together for many years before the defensive midfielder’s move to West Ham.

The lovebirds have a daughter together. Her name is Terezka. Soucek’s loves his girlfriend and daughter very much. As such, he does his best to put their interests into consideration whenever he makes key career decisions.

Like most stopper’s Soucek is blessed to have a supportive family. Here, we give you facts about Tomas Soucek’s parents, siblings and relatives.

About Tomas Soucek’s Father and Mother:

Soucek has little known parents. Nonetheless, we do know that his mom had a rich history in athletics as a professional marathon runner.  On the other hand, his dad has coaching interests in football. He credits both parents for taking turns to drive him for trainings. Little wonder the footballer takes them to every big match. He does also strive hard to live up to their expectations.

About Tomas Soucek’s Siblings and Relatives:

Soucek is yet to mention having a brother or sister whenever he gives a recap of his life story during interviews. As such, there is a likelihood that he is the only child born to his parents. Regarding the player’s ancestry and relatives, not much is known about his grandparents.  Similarly, his aunts, uncles, nephews, nieces and cousins are yet unknown,

Away from Tomas Soucek’s on-pitch penchant for being an awesome defender and goal threat, the facts and opinions regarding his off-pitch persona are both unanimous and likeable. Fans and teammates confess to the fact that he is emotionally driven, humble and creative.

The impressive midfielder whose Zodiac Sign is Pisces does regularly engage a few activities that pass for his interest and hobbies. They include listening to music, swimming, travelling to see monkeys (see below) and spending good time with family and friends.

Regarding how Tomas Soucek makes and spends his money, his net worth is under review as of July 2020. Nonetheless, there is no denying the fact that he earns significant wages and salaries from playing top-flight football.

In addition, the defensive midfielder does make an enviable income from endorsements and will definitely have no problem living the comfortable lifestyle of footballers who have super expensive cars in the garage of their houses and apartments.

To wrap up our Tomas Soucek’s childhood story and biography facts here are lesser-known or untold facts about the defensive midfielder.

This is what Tomas Soucek has earned since you began viewing this Page.

Soucek has a FIFA 2020 overall rating stood at 81 points as of July. It goes without saying that it is just a matter of time before his rating equals those of César Azpilicueta and Wilfred Ndidi who are both rated 84.

The defensive midfielder is yet to give clues as regards to his religious beliefs on social media, interviews and in the field of play. Nonetheless, the odds are greatly in favour of him being a Christian.

Do you know that Soucek’s birth year – 1995 is significant for a number of key technological advancement and entertaining events? it was the year which DVD optical disc storage media format was announced. On the entertainment scene, 1995 was the year which films like Pocahontas and Batman hit cinemas.

Thank you for reading this insightful article on Tomas Soucek’s biography. We do hope that the writeup convinces you of the fact that he deserves due attention for the strides he has made in football.

At Lifebooger, we pride ourselves on delivering fair and accurate bios. If you did come across any bias or unfair statement in the course of perusal, please do well to contact us or leave a comment.