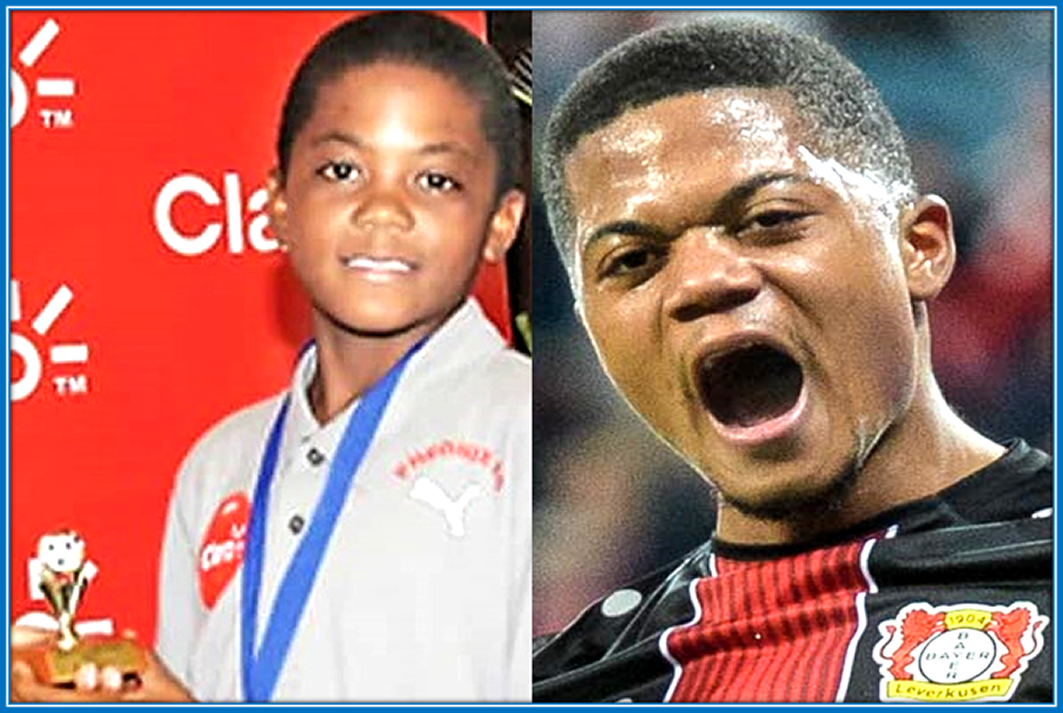 Our Biography of Leon Bailey tells you Facts about his Childhood Story, Early Life, Parents, Family, Girlfriend/wife to be, Child, Lifestyle, Net Worth and Personal Life.

In the nutshell, this is a Life Story of the Jamaican footballer. Lifebogger begin from his boyhood days to when he became famous.

To whet your autobiography appetite, we’ve prepared his earliest moment to adulthood — a perfect summary of Leon Bailey’s Bio.

Like Raheem Sterling – back in the days – he is one of Europe’s most talked-about young footballers.

However, just a few are aware of Leon Bailey’s chaotic rise from Kingston to Leverkusen. We captured his Life Story and without further ado, let’s begin.

For Biography starters, he bears the nickname ‘Chippy’. Leon Patrick Bailey Butler was born on the 9th day of August 1997 at Kingston City in Jamaica.

The Jamaican was born to a little known Dad, a look-alike mum, and has an adoptive father – Craig Butler.

Leon Bailey spent his childhood years at Cassava Piece, an area regarded as one of the most violent neighbourhoods in Kingston, Jamaica.

Back in the days, Poverty reigned supreme, and it was easy for kids like Bailey to become a drug peddler.

Fortunately, football offered him an escape from the widespread debauchery. Leon Bailey loved the sport so much and never cared about anything, including hunger.

He never wanted his mum’s food as long as there is a ball at his feet. According to him:

“Football chose me. Ever since I was born, all I wanted to do was kick everything – anything you put in front of me.

I always tell people that I started in my moma’s belly because since I came out I’ve just been kicking everything.”

The footballer’s life story is one of the many examples of a rag to riches tale. Because his parents were poor, Leon suffered lack for much of his childhood and youth.

Truth is, it was sheer will and never give up the mentality that kept him going. He once recalled that:

“When I look back on my life in Cassava Piece it wasn’t easy, but it wasn’t bad either.

It’s an area that’s poor, but it turned me into somebody I never thought I’d become.

I’m very street-smart. I can understand life in different aspects and I’m very grateful to have come through an environment like that.”

We are aware that he is a Jamaican national. However, his roots extend far beyond the Caribbean.

Interestingly, our research indicates he has English family ancestry, a development which suggests he may be biracial.

By the time Bailey was six, he joined the Phoenix All-Star Academy in Kingston. The academy was owned and run by Craig Butler, a man who would later become Bailey’s Adoptive dad.

Though young, Bailey was serious about football and knew just what he wanted. Those who knew him – deep down to his parents – would testify two facts.

First, his drive was second to none and secondly, his vision was crystal clear.

Thanks to the lad’s drive, his adoptive father Craig became emboldened to take him for trials in Europe. Bailey wasn’t alone on the journey.

He went with two other brothers, among which includes Kyle Butler (Craig’s biological son) and Kevaughn Atkinson (another adopted child).

When they arrived in Europe, it was winter, a weather condition that was alien to him and his brothers. Nonetheless, Kevaughn, Kyle and Bailey adapted.

While they enrolled the youngster in an Austrian club Liefering, Kevaughn Atkinson got registered at USK Anif. Kyle Butler also settled with an Austrian side.

The speedster wasn’t recording progressive gains at Liefering because FIFA rules forbid signing non-EU players under 18. Thus, he moved to Slovak side AS Trencin, where he kept his soccer aspirations alive until he turned 18 in 2015.

It was that same year that he signed for Belgian club Genk and made his top-flight debut. By the end of his maiden campaign in 2015/16, he was already something of a cult hero after scoring one of Genk’s most important goals of their calender year.

Armed with an excellent track record and young age, Bailey was on the radar of many big clubs. However, he joined Bayer Leverkusen because it had a soft spot for nifty young attackers like Kai Havertz.

Upon settling into his new surroundings, ‘Chippy’ gradually found his feet at the BayArena.

His breakthrough came during the 2017/18 football year when he registered six assists and nine goals to help Die Werkself finish fifth and qualify for the Europa League.

So long as Leon remains an active part of the team, there are no limits for Bayer Leverkusen. All thanks to the speedy creativity which he injects, the rest we say, is history.

Chippy is in love. Not just with the game, but with his girlfriend and wife to be. Her name is Stephanie Hope.

It would not be hard to spot his girlfriend because Bailey often takes her with him to award nights and vacations. With such outings, he subtly declares his intention of getting hitched to the beauty in no distant time.

Did you know?… Stephanie Hope is not just a girlfriend but a mother to Bailey’s son, Leo Cristiano.

Don’t get it twisted, Bailey didn’t name his son after Lionel Messi and Cristiano Ronaldo. The “Leo” is from Leon while “Cristiano” was added because bailey thinks it rhymes well with “Leo”.

Can you name any soccer genius who doesn’t have a nuclear unit of people who care about him more than other people do? No, of course.

They all families, and the Jamaican is not an exemption. We bring you facts about Leon Bailey’s parents and siblings. Also, we will make facts about Bailey’s relatives available here.

Again, there are no records of the Technical dribbler’s biological dad. On this note, the only father figure in his life is an adoptive dad – Craig Butler. He is the founder of Phoenix All-Star Academy in Kingston, Jamaica.

Craig Butler has sacrificed a lot to ensure that Bailey and his adoptive brothers Kyle Butler (Craig’s biological son) and Kevaughn Atkinson become successful in life.

Even when things weren’t working as planned, Craig’s fortitude inspired the lads to preserve and eventually triumphed over adversity.

The speedster’s mom is supportive and loving. That explains why Bailey constantly strives to reward her with exquisite vacation trips.

The speedster is aware that it is impossible to repay his mother completely. Notwithstanding, he aspires to do so.

The Jamaica-born has only his adoptive brothers. We earlier mentioned their names as Kyle and Atkinson. They are fiercely loyal to each other and share powerful bonds. There are no records of his biological siblings.

The speed dribbler has English grandparents. It is yet unclear as to which of Leon Bailey’s parents claim ownership to England ancestry. There’s also a shroud of obscurity on the identities of his uncles, aunts, cousins, nephews and nieces.

Who is Chippy beyond being the Technical dribbler that helps Leverkusen shoots at the top of the table?

First and foremost, our Biography speaks well of him as a cheerful, hardworking and down-to-earth individual who is good at balancing a career with fun.

The Footballer loves partying and relaxing big on waters. Also, he is big on making grand appearances at events. Also, he doesn’t miss out on spending quality time with family, especially his son.

With such significant monthly pay, Bailey doesn’t deny himself the pleasure of life. Have you seen the cars in the garage of his expensive house? They are spectacular. He is no doubts living the lifestyle young footballers dream of.

To wrap this article on his childhood story and biography, here are little truths about him.

Since you started viewing Leon Bailey’s Bio, this is what he has earned.

Ever wonder why the winger is called Chippy? His dad gave him the nickname because he looked like the character Alvin from the movie Chipmunks.

Interestingly, it is only family and friends close to him that calls him by that nickname.

Like Alassane Plea, Leon suffers from a poor overall rating – a feat which doesn’t speak well for Bundesliga striking force.

His potential of 85 is a bit fair for a winger who is good on both feet, rapid, skilful, incisive. We believe 84/90 would reflect current reality as regards to his amazing capabilities.

Bailey has left no clue about his religion. He doesn’t cross himself when stepping into the pitch and has not been seen muttering prayers.

However, there’s a high possibility Leon Bailey’s parents are Christian, especially as he named his son Cristiano.

Chippy and Usain Bolt are both Jamaicans. In addition, both athletes are close, and Bailey doesn’t shy from noting how supportive the former runner is.

They are both the best athletes to have emerged from the Caribbean island.

“I would say we’re really, really close. Usain Bolt was always there for me. ALSO, He has taught a lot of life lessons. Bolt is an amazing guy and fun to be with.”

Thanks for reading this informative piece on Leon Bailey’s childhood story and biography. We hope it has inspired you to believe that perseverance is the key to triumphing over adversity. Just like Bailey never gave up on his changing career that spanned 6 countries.

It behoves us now to commend the midfielder’s parents. This includes his adoptive father Craig Butler, his brothers and other family members for their support to his career in words and deeds.

At LifeBogger, we take pride in delivering childhood stories and biography facts with accuracy and fairness. If you observe anything that doesn’t look right, do well to contact us or leave a comment below on your thoughts about the Jamaican.

To quench your life story appetite, we’ve summarized his Biography in a table.