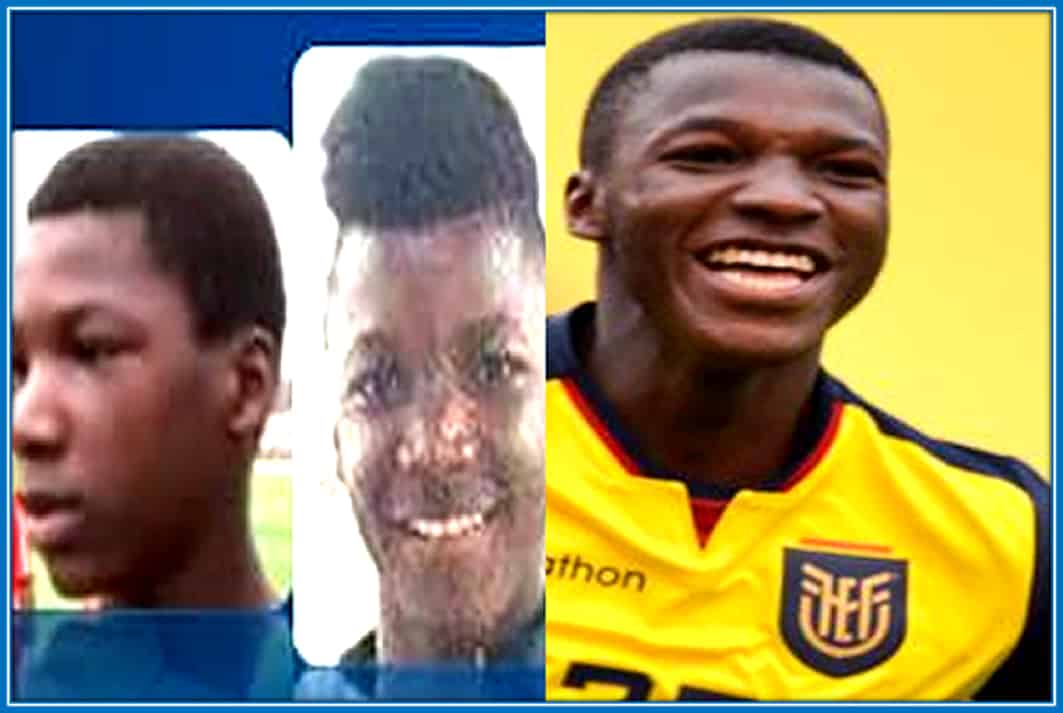 Our Biography of Moises Caicedo tells you Facts about his Childhood Story, Early Life, Parents, Family, Girlfriend/wife to be, Lifestyle and Personal Life.

In a nutshell, we portray the history of the Ecuadorian footballer. Lifebogger begins from his early days, to when he became famous as a transfer target for teams.

To give you a taste of the engaging nature of Moises Caicedo’s Bio, here is a pictorial summary of his life.

Yes, everyone knows he is an Ecuadorian superstar in the making. However, only a few persons have read Moises Caicedo’s biography, which is quite engaging. Without further ado, let’s begin.

For bio starters, his nickname is ‘Moi’. Moises Isaac Caicedo Corozo was born on the 2nd day of November 2001 in the city of Santo Domingo in Ecuador. He was born to parents who appear to be over 60 years old.

Moi is a bonafide Ecuadorian. In fact, by merely looking at our boy, he is more African than a Spanish speaking South-American.

Wouldn’t you agree? We welcome arguments for or against this proposition in the comment box.

The midfielder grew up in his birth city. The neighbourhood he grew up in was a bit dangerous because of the presence of many gangs. However, his family had no choice but to live there.

Growing up in the city, Moi loved football and used to play on fields without grass. His childhood dream was to wear the Independiente del Valle Jersey.

Therefore, he often went on his knees at Night to pray that God helps him accomplish his dream.

Did we mention that the midfielder didn’t have an easy childhood? The development is not unconnected to the fact that he hailed from a lower-class family. Caicedo parents could only afford him football boots but had lots of love for him.

Contrary to misinformation that has become pervasive, our boy’s career didn’t start at Independiente del Valle. He was with Espoli and layer Colorados SC before joining the Los Negriazules when he was 13.

Moi’s early days with the black and blues were challenging. In fact, he literally struggled to cope. At some point, he called his mom to intimate her with his intention of returning home.

Fortunately, he received good counsel from training coordinator Miguel Ángel Ramírez who told him it was normal to fail but persistence conquers all.

The advice did Caicedo a lot of good as he rose through the ranks with his eyes set on becoming the best version of himself.

Did you know that that the fast-rising player and his teammates won the Copa Mitad del Mundo and defeated Real Madrid in the Adidas Generation Cup final?

He also captained his side to victory against River Plate in the Under-20 Libertadores final.

When Caicedo made his debut for the Los Negriazules in October 2019, little did he know that he was on the verge of becoming famous.

In the ensuing months, he courted attention and was dubbed Ecuador’s part-Kante, part-Pogba by the press and admirers.

The soccer star was an inch close to fame when he debuted for Ecuador senior national team in a 1-0 2022 FIFA World Cup qualification loss to Argentina on 9 October.

In his second qualifier game, Caicedo scored the first goal in a 4-2 home win over Uruguay on 13 October 2020.

With the Goal, Moi entered history books as the first player born in the third millennium to ever score in CONMEBOL World Cup Qualifying.

At the time of writing this article on Moises Childhood Story and biography, news headlines have it that – Manchester United ‘reach agreement’ to sign Moises Caicedo.

The Reds have faith in his capabilities to replace Paul Pogba who is on the verge of leaving Old Trafford. We believe Caicedo has what it takes to be a Premier League Star and would perform wonders with the English Side.

The rest as they say is history.

Who is Moises Caicedo Girlfriend?

Our boy is happily in love with the right person. The girlfriend goes by the name Paolita. She is white and Caicedo regards her as one of the best things that have happened to him. According to him:

“I’m very good with my girlfriend. She loves and respects me.”

To understand how much Caicedo loves his girlfriend, there is a post about the lovebirds on his Instagram handle.

The photo has the caption – God bless our relationship. He is lucky to have found the right person for him and we wish them the best.

Like a good number of football genius, Moi’s rise and ambition in the sport is tied to a greater purpose. We call it family.

Behold facts about the midfielder’s family. Also, we will also present facts about his siblings and relatives here.

Moi’s parents aren’t known by their names yet. However, their reputation precedes them. Three years ago, the player promised to make them proud of him. By and large, he has fulfilled the promise.

Tho not financially buoyant, Moi’s parents were rich in offering moral support to the youngster and goading him to success. The result of their unflinching support is now yielding fruits.

The soccer maestro was the last of 10 children born to his parents. He did mention that one of his older brothers went through the ranks of Independiente del Valle.

Obviously, he must have failed to become a professional. Notwithstanding, the siblings must all be proud of Moises for bringing fame to the family’s name.

Therefore, we don’t have the names of his grandparents, uncles, aunt, nieces, and cousins and the relationship that exists between them.

There is a lot you don’t know about the soccer genius asides from his high-energy and aggressive pressing style of play. He is a quiet boy, but not too quiet to be considered dull or a recluse.

Caicedo doesn’t fancy drinking and has no interests in hanging out with women. He regularly goes on vacations once in a while and must have other hobbies and interests that keep him physically and mentally in shape.

Let’s discuss how the soccer player makes and spends his money beginning with his net worth. Sadly, his net worth is still under review. However, his weekly pay of €500 is nothing to write home about.

There isn’t much he can do with such pay. Hopefully, when he eventually arrives at Old Trafford, he will earn more than he can spend and have assets like cars and houses to look the part of a top-flight star.

Wrapping up this article, here are things you should know about Ecuador’s Breakthrough Star. They are Untold facts about him.

Fact #1 – Salary and Earnings Per Seconds:

Since you started viewing Moises Caicedo’s Bio, this is what he has earned.

Did you know?… the average Ecuadorian who earns 466.63 USD per month would need to work for four months and two weeks to earn Moises’ salary at Independiente del Valle.

Moises is a variant of the name Moses. The midfielder is Christian. Interestingly, he has been spotted praying a few times before stepping into the pitch.

More so, he regularly mentions God on his Instagram for prayers and thanksgiving.

Caicedo has an overall rating of 62 with a potential of 77. While the rating is annoyingly low, it shows how much work Caicedo needs to put in to become fan’s favourite. He will surely live up to expectations.

Thanks for reading this informative piece on Moises Caicedo’s childhood story and biography. We hope it has inspired you to believe that persistence conquers all.

Just like Caicedo never gave up on trying to be the best he could be until he attained Fame.

It behoves us now to commend the midfielder’s parents for their support to his career in words and deeds.