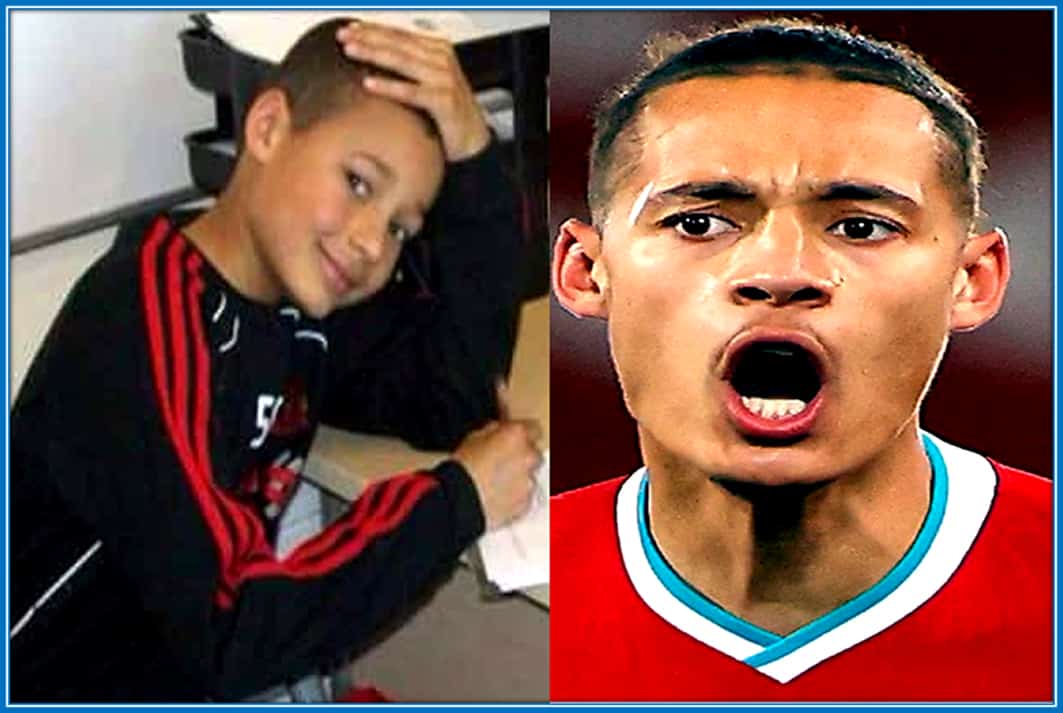 The Biography of Rhys Williams portrays Facts about his Childhood Story, Early Life, Parents, Family, Girlfriend/Wife to be, Lifestyle, Net Worth and Personal Life.

In a nutshell, we present you the history of an English professional footballer inspired by Jurgen Klopp’s Liverpool.

Lifebogger begins from his early days to when he became famous.

To give you a taste of the engaging nature of Rhys Williams’ Biography, here is the Baller’s Early Life and Rise Gallery. This intro to his life journey does tell the story of the Preston native.

Yes, you and I know he has Baby Face – something synonymous with Van Dijk both in looks and character.

Despite the honour, we notice not many fans have seen a concise version of Rhys Life Story. We’ve prepared his engaging memoir, just for you. Now without further ado, let’s begin.

For Biography starters, he bears the nickname — Baby Face. Rhys Williams was born on the 3rd day of February 2001 at the city of Preston in England. He was born to a mother and father that he is yet to reveal.

The 6 feet 4 inches star spent his early years in Priston. As a boy, he fell in love with football  – from a very young age.

Like most football talents, Rys knew he was cut out to be a soccer star. Thus, the English city of of Preston helped him work towards it.

Baby face’s journey to becoming a top-flight star was not made on a lonely path. He had the support of his middle-class parents.

Commendably, they made his happiness their priority. Also, Mum and Dad were readily available to provide whatever their boy desired.

Have you noticed?… the Preston-born starlet’s first name sounds Welsh. That may be an excellent pointer to where his family roots are established.

Since it has become quite easy to confuse Wales with English, it will be fair to note that Williams is a British star.

By the time the youngster was 10 years, his parents helped him get into the Liverpool academy. It was a club he loved. Interestingly, being a part of The Red’s youth system gave him a sense of purpose.

Amid his rise through the ranks of the club, Williams recorded progress in leaps and bounds for both club and Country. With Liverpool, he played alongside close friends like the Irish Goalie, Caoimhin Kelleher, who joined Liverpool in 2015.

Can you spot the 6 feet 4 inches defender featuring for the Young Lions alongside Curtis Jones and Bukayo Saka?

At the peak of his Youth Career with the reds, Baby Face won the FA Youth Cup in 2019. The feat was significant because it was the first time the Reds had won the tournament since 2007.

Thereafter, the fast-rising youngster was sent on loan to the Non-league club Kidderminster Harriers on loan in August 2019.

When the Going got Hard:

It is worthwhile to note that he had a tough time at the Aggborough Stadium. Back then Opposition players bullied him with their superior physicality.

Also, Williams suffered concussions and even had his nose broken. However, he drew strength from the experience and became a skilful player with great technique.

When the centre-back returned to his parent club, they quickly handed him a contract and first-team opportunities.

The offer was unconnected to the fact that Fabinho and Van Dijk had injuries. Seizing the opportunity, Williams impressed in his EFL and Champions league debut.

The Centre back’s breakthrough came during his second champions league appearance. He came in as a 30th-minute substitute for injured Fabinho and helped Liverpool record a 2-0 Victory over FC Midtjylland.

William’s performance in that match earned him many praises. Little wonder when he spoke to the press he commented that: ‘It was the best night of my life’.

William’s journey in top-flight football has only begun, and the best is yet to come for him. The rest, as we say, is history.

Baby Face is not single. Neither is he married. All he has is a gorgeous girlfriend. Her name is Thea Spencer.

Interestingly, the lovebirds are almost of the same height and have the same skin colour. Isn’t that cute? oh!… it seems Thea Spencer is taller than her husband-to-be.

A glance through Williams’ Instagram page reveals they have plans for the future and are already serving couples’ goals.

It gladdens the hearts of fans that Spencer has one of the best gorgeous-looking girlfriends in the league. They can’t wait to see where their love boat berth.

Baby Face’s life and rise in football would not have been possible without some special people in his life.

They are his family. Here, we bring you facts about Rhys Williams’ Parents and siblings. We will also make truths about his relatives available here.

The centre backs dad and mom are working really hard behind the scenes to ensure that their boy becomes a great centre-back – even better than Jamaal Lascelles – in no distant time.

However, Rhys is yet to reveal their identities or state the relationship that exists between them.

Notwithstanding, they evidently did a magnificent job in raising him. Williams’ mom and dad must be proud of his meteoric success. Hopefully, they would never cease to have his best interests at heart.

Away from his parents, it is yet unclear whether he has brothers and sisters. Also, records of his maternal and paternal grandparents are yet to be made public.

Neither has he identified his aunts, uncles, cousins as well as possible nephew and nieces.

There are just a few starlets who know how to balance ambition with the right attitude. Williams is one of them. He arguably has one of the cutest smiles in football. Also, he possesses great interpersonal skills. 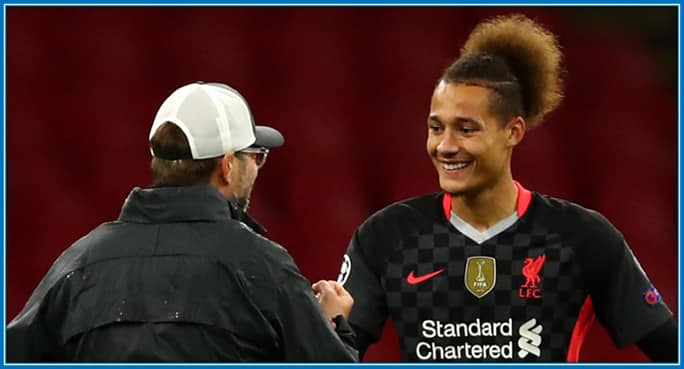 Also on a personal note, Rhys is a good listener who doesn’t speak much. Also, he has a fine mind. In fact, fans never cease to give Shoutout to Rhys Williams on local radio and social media because his persona is rare and intriguing.

Finally, on his personal life, the 6 feet 4 inches centre-back is a very reserved person. Rhys hasn’t given clues to his interests and hobbies.

These days, he stiffens his face so fans wouldn’t misinterpret his baby face looks for a soft defender. 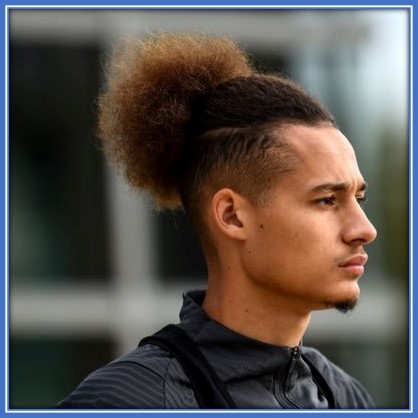 As much as we would love to extensively discuss how our boy makes and spends his money, we can’t for genuine reasons. His net worth is under review as of December 2020. Also, Liverpool has not revealed his earnings to the public.

However, we can estimate that he earns £226,868 annually. To sum it all up, Williams is conservative, a development that leaves fans with one option.

It is having the view that he cares less about expensive cars, big houses etc – at least for now.

Wrapping up his childhood story and biography story, here are little-known truths about him.

Since you started viewing Rhys Williams’ Bio, this is what he has earned.

Footballers rarely make their disposition regarding matters of faith public. Thus, is difficult to figure out whether they are believers or not. Rhys Williams must be a believer – like Anthony Gordon. However, we can’t conclusively state the particular religion he practices.

As of the 2020/2021 season, Rhys Williams is the tallest Liverpool player. Alongside Joël Matip, both measure a whopping 195 meters in height. Virgil and Alisson Becker come next among the Reds tallest.

Like Patrick Bamford, Rhys has an uncool FIFA rating. Also, he has a potential of 74. The figures show that he needs to put in a more defensive work rate to up his points. Hopefully, the ratings will improve as he makes more appearance.

Thanks for reading this informative piece on Rhys Williams’ childhood story plus biography. How he went from Non-League to Champions League is an inspiring lesson that proves miracles happen when preparedness meets opportunity.

In fact, we can’t hep but commend the midfielder’s parents for their support to his career in words and deeds. He grew up cocooned by his family’s love, conformed by their hugs and motivated by their lives.

At lifebogger, we take pride in delivering Soccer stories with accuracy and fairness. Fans, please stay connected with us for more English Footballers Stories.

If you see anything that doesn’t look right, do well to contact us or leave a message below. Alternatively, tell us what you think of him in the comment section. Finally, to quench your quick taste of Rhys Williams’ Bio, use our Wiki table.