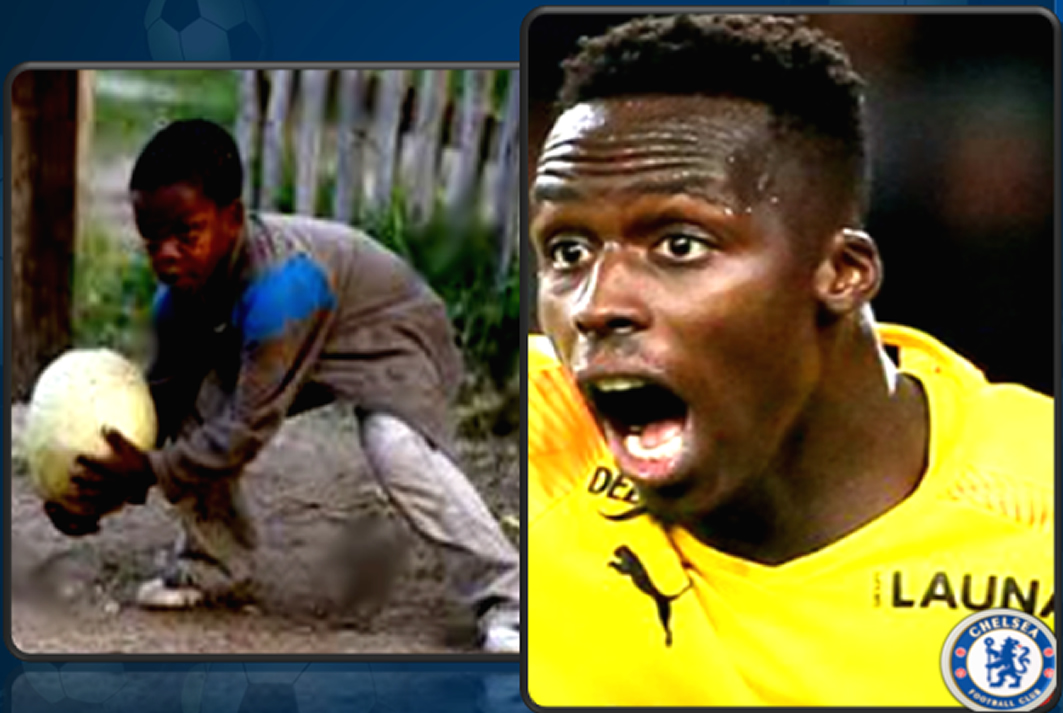 Our Biography of Edouard Mendy tells you Facts about his Childhood Story, Early Life, Parents, Family, Love Life (Girlfriend/Wife), Net Worth and Lifestyle.

Put simply, this article is a complete summarily a the Goalkeeper’s Bio, beginning from his early days to when he became popular.

Yes, you and I know have seen videos displaying his commanding presence inside the penalty area. However, not many, especially Chelsea Fans, have read his inspiring Biography OR even know the fact that Edouard Mendy related to Ferland Mendy. Now without much ado, let’s begin with the story of his Early Years.

For Biography Starters, the Goalkeeper has the nickname “Tall Doorkeeper”. Edouard Mendy was born on the 1st day of March 1992 to his Mother (from Senegal) and Late Father (from Guinea-Bissau), in the French municipality of Montivilliers, Northern France.

The 6 foot 6 inches Goalkeeper spent his early years in France alongside his siblings which include a sister. Not to forget, Edouard Mendy’s cousin is Ferland Mendy– whom he also grew up with. Till date, smiles radiate from his face whenever he recalls his fun-filled growing-up years- as a son of non-French native parents- one who became a passionate lover of the game as a child.

Even as a son of immigrant parents, abject poverty has no chapter in the Goalkeeper’s Bio. This implies he didn’t come from a poor home, but rather, a middle-class family. In fact, Edouard Mendy’s parents did a magnificent job raising him without lack. More so, they were ever ready to help him tread whatever path he chooses for himself.

Although, you know the Shot-Stopper as a French and Senegalese National. The truth is, he also has family origins rooted in Guinea-Bissau where his dad hails from. As such, he is one of the few African multi-ethnic personalities in top-flight football.

As a little boy, he fell deeply in love soccer above anything else. More so, he was with the dream of wanting to become a professional in the sport. Early on, Edouard Mendy parents helped positioned him to achieve his dreams by enrolling him at Le Havre Caucriauville football club when he was 7 years old.

While taking his first steps in the sport at the club, Edouard had several soccer idols who he looked up to including Fabian Barthez. He went on to join Le Havre Athletic Club where he perfected his mastery of goalkeeping basics.

Despite becoming very good, Edouard was not Le Havre Athletic Club first-choice goal keeper. He was stuck behind a more talented Zacharie Boucher, a development which made him drop levels to play with CS Municipaux.

The Goalkeeping Prodigy eventually began his professional career with AS Cherbourg where he didn’t get enough playtime. When Edouard’s contract with AS Cherbourg expired in 2014, he had offers to join other clubs but he had sights on playing in a league outside France.

Back then, his ex-agent had given him assurance that they would seal a deal. Sadly, it didn’t work out and the then 22 years old was left jobless.

I tried to contact him (ex-agent) but he never responded. I heard nothing from him except a text wishing me good luck for the future.

Edouard told LeParisen of the botch deal. The club-less Goalie saw himself joining the queue of job hunters in Northern France. Upon spending a full year away from soccer, poor Edouard decided to quit the sport.

For footballers or anyone else, being jobless is akin to receiving a slap in the face.

Strings of failures leave marks that make you doubt whether you should continue with football or not.

Like the Liverpool saying, the Senegalese Goalkeeper didn’t see himself walking alone. As expected, Edouard Mendy’s parents and family members were there to console him, as they advised he gives the sport another chance- which he did.

Thankfully, the then less confident and insecure goalkeeper returned to Le Havre where soccer started for him- without salary or wages. Yes you did get that right!… He consistently trained with the club for a year without pay.

One day, Edouard soon got wind of information that Marseille was seeking a goalkeeper to replace reserves- Brice Samba and Julien Fabri who were out on loan. Applying and passing the club’s trial, he became their fourth-choice Goalkeeper.

Although the Fast-Rising Senegalese was behind a more talented Florian Escales who was first choice Shot-Stopper. Nevertheless, he kept pushing beyond limit- a feat that helped him attain great heights in no time.

I trained with professionals throughout my stay at Marseille. It is something that one can only dream of as a No: 4 gOALkeeper.

Training with stars like Abou Diaby, Lassana Diarra and winning duels against Michy Batshuayi or Steven Fletcher really brought out the best in me.

Says Edouard Mendy- on his experience. Seeking for regular playtime, the Fighter moved to Ligue 2 outfit Reims where he worked his way to become the club’s first-choice keeper, during the 2017-2018 season. He subsequently helped the club achieve promotion to Ligue 1 before leaving for Rennes.

With the club, Edouard rise became super rapid, from helping the club finish third to qualifying for the Champions League. He earned lots praises from many, including Rennes and Chelsea club legend Petr Cech who advised the Blues’ Frank Lampard to sign him.

Fast forward to the time of writing his Life Story, Edouard Mendy- like Neal Maupay and Lucas Digne are among French middle weights plying their trade in the Premier League. He prays to become the first choice Goalkeeper with Chelsea FC. As expected, Mendy is to provide competition that will either push Kepa Arrizabalaga back to his best or unseat him as No 1 Stopper. Whichever direction things go for him, the rest, as we always say, will be history.

Who is Edouard Mendy’s Girlfriend?

With his success, and also standing at 6 foot 6 inches or 198 cm tall in height, the handsome man from Senegal is likely to have things working out for him in his love life. However (at this time of writing), Edouard is yet to reveal the woman goading him to success.

Fortunately, he just signed up to play in the Premier League where fans will soon make him answer questions as to whether he has a girlfriend or if he is married- meaning he has wife and kids.

Truth is, we doubt if a man of his caliber will be single. Hence we assure you, it wouldn’t be long before you get to meet Edouard Mendy’s girlfriend or Wife. His time and success at London will tell.

The Shot-Stopper is one who values relations with his household. Simply put, he cherishes people who are very close to him. Here, we bring you Facts about Edouard Mendy’s parents and siblings. Also, we’ll assist you with facts about his relatives so you can understand him better.

In his loving memory, the French man’s dad (Pa Mendy) is no more. He died of a serious health problem. Thankfully, Edouard Mendy’s dad lived to see his son turn professional. The sad part is the fact that he didn’t live long enough to witness Edouard’s later successful years in the game. As a way to pay his dad, the Goalkeeper once agreed to play for his father’s lineage (Guinea Bissau)- just an international appearance.

Firs and foremost, she is one of his biggest fans. Edouard does often celebrate his mother on social media in ways that leave no doubt about the existing chemistry between them. We have a cute photo of her below. Among his parents, you’ll agree with me the Edouard Mendy would look more like his dad- both in height and complexion.

A close study of photos on the goalies Instagram page will convince you he is not the only child of his parents. Edouard Mendy has several brothers and a sister who is fairly tall like him. Can you spot her in the photo below?

Away from the goalie’s immediate family, there are no records of his grandparents, aunts, uncles, nephews and nieces. Again and interestingly, Edouard Mendy is a cousin to Ferland Mendy who at the time of writing, plays for Real Madrid and the national team of France.

Friends, fans and teammates can attest to some facts about the content of the goalie’s characters outside soccer. They include his down-to-earth nature, openness, optimism and incredible work rate. He loves hanging out with friends and has interests in fashion.  In addition, watching movies and playing video games are also some activities he engages whenever he is not on the field of play.

Edouard Mendy Lifestyle and Net Worth:

Let’s discuss how much the shot-stopper is worth is 2020 and sources of his income. To start with, Edouard Mendy’s net worth in 2020 is still under review. Without a doubt, he has a fast-rising wealth thanks to a big Chelsea FC wages.

The “tall doorkeeper” does also rake in significant income for endorsing brands. However, his conservative lifestyle makes it difficult to track his spending patterns. Notwithstanding, it is certain that has the capacity to drive posh cars and live in expensive houses.

To wrap this engaging article, here are lesser-known or Untold facts about the Stopper.

Judging by his cousin- Ferland, it is fairly easy to determine the side of believers divide that he falls in. Our odds are in great favor of him being a Muslim as Islam is the religion of his dad.

If professional goalkeeping never worked out for Edouard, he would settle for business. He is someone who has great interpersonal skills and would have definitely fared well in that aspect.

Thanks for reading our summary of Edouard Mendy’s biography. We hope it has inspired you to believe that giving up never pays. Without doubt, his Bio is tells a story- from disappiontment to tracing back his steps where he positioned himself for a life-changing opportunity. Edouard Mendy parents, espcially his late Dad should be very proud of his patience and perseverance.

At lifebogger, consistency and fairness are our watchwords in delivering factual soccer stories. Do contact us or leave a comment if you see anything that doesn’t look right in this article. Or else, kindly tell us what you think about our memior of the Goalkeeper.