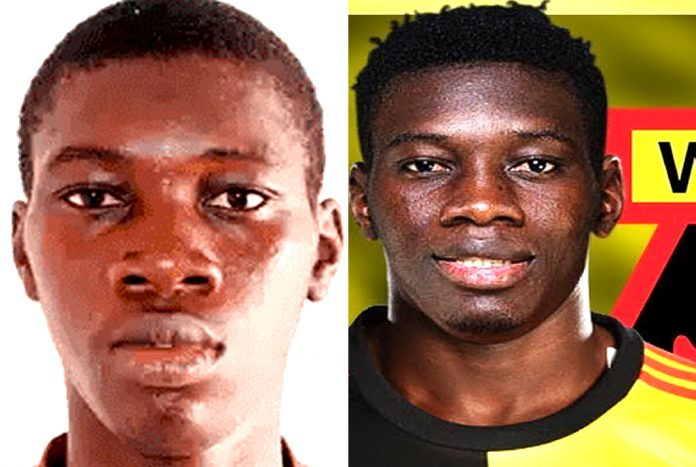 In the nutshell, portray the history of the Senegalese professional footballer. Lifebogger begins from his early days to when he became famous.

To whet your autobiography appetite, here is a grass to grace gallery — a perfect summary of Ismaila Sarr’s Bio.

Yes, everyone knows he got speed, trickery, and can score great goals- a prerequisite for a perfect FIFA Forward.

However, only a hand few of fans have read a concise piece of Ismaila Sarr’s Biography which is quite interesting. Now without further ado, let’s begin.

For Biography starters, he bears the nickname “Isma.” Ismaïla Sarr was born on the 25th day of February 1998 to his mother, Marieme Ba, and father, Abdoulaye Sarr Naar Gaad in the northwest coastal city of Saint Louis, Senegal.

Ismaila Sarr’s city of birth, Saint Louis (founded 1659) is regarded as one of the oldest colonial cities on the western African coast, sometimes referred to as the French headquarters of West Africa.

Below is a view of the West African coastal city where Ismaila Sarr has his family roots.

Ismaila Sarr Early Years: The speedy footballer from African family origin spent the earliest part of his years at Saint Louis. He grew up alongside four of his siblings born to his parents namely; Papis, Kiné, Ndèye Ami, and Badara.

Ismaila Sarr hails from an upper-middle-class family background operated by his dad who was a former footballer.

Did you know?… Ismaila Sarr’s father, Abdoulaye Sarr Naar Gaad was a former Senegalese international who played for the West African country during the late 80s.

This fact by implication means football runs in his family thanks to his dad.

For more than 20 years after retirement from football, it was fairly easy for Abdoulaye Sarr Naar Gaad to move on to other jobs and deal with retirement.

The super dad despite grazing the football fields held on to the view that his sons must not compromise their education for football.

Early on, he enrolled his children including Ismaila Sarr at Oumar Syr Diagne School located at St Louis, Senegal.

Hatred for School: Ismaila Sarr detested school and wasn’t pleased with his parent’s decision to send him to school.

In fact, reading school books was never his thing and too many who knew him in his neighborhood, going to school appeared to be a mere formality. On most occasions, he would skip school in order to go and play football with his friends.

Ismaila Sarr’s parents received several bad reports from his school teachers and upon observing this act themself, they decided to take action on their son.

They made him stop schooling and forcibly took him to a master tailor in his neighborhood so he could learn tailoring (the activity or trade of a tailor).

Like any good apprentice, Ismaila Sarr was humble enough to learn the basics of tailoring, which he did in a diligent way. However, his football conscience couldn’t allow him to continue serving his master. Simply put, his heart wanted football.

In the end, the brave boy followed his heart as he abandoned tailoring and forcefully went on to live his passion initially, without his parent’s approval.

AS Génération Foot. After a successful trial, the young lad got enrolled in football classes.

Ismaila Sarr started at the same Academy as Sadio Mane. He learned the basics of the profession at AS Génération Foot as he every day as a chance to make the best out of my profession.

He helped the club progress from the second tier to the top flight of the Senegalese League. His huge interest and enthusiasm towards football saw him dreaming of getting to Europe.

Like most footballers who are lucky to get out of the country to play in Europe, the frequent destination is always their French Colon- France. The year 2016 saw Ismaila leaving his family behind and signing his first professional contract with FC Metz.

I had to adapt to a new environment wasn’t easy for young Ismaila who has never left his country and played on foreign soil.

Due to the need to impress, Sarr suffered from recurring injuries, due to excess engagement in the field which is often the cause of his physical glitches.

Getting injured repeatedly made his family fear for his career. It got serious that Sarr’s dad had to intervene. According to the footballer;

“Even my father often called me, screaming at me to change the way I play, in order to avoid getting injured often. But I couldn’t help it. I kept fighting and engaging my opponents until I became stronger and more resistant to injuries”

Did you know?… Ismaila Sarr could have gone to Spain and join the great Barcelona. The promising footballer rejected Barcelona claiming it was too early for his career.

Was Sarr that good to be called by the Spanish Giant?. The video below explains why he deserved a call by FC Barcelona. See some of his goal highlights.

Ismaila Sarr ignored great Barcelona to join Rennes to where he continued his great goal-scoring form (some of his goals) as observed in the video above. This feat saw him getting named in the Senegalese squad of the 2018 FIFA World Cup.

While at Rennes, Ismaila Sarr began watching videos of Sadio Mane – his accelerations, his dribbling, and goals.

On 8 August 2019, Sarr joined Premier League club, Watford, in a club-record transfer fee. Since his coming to the Premier League scene, there has been a bit of extra romance for both FIFA gamers and Watford fans who are very impressed with Ismaila Sarr’s speed and trickery.

At the time of writing, Sarr’s standout moment in a Watford shirt has been in the game against United where he scored a volley and caused a penalty that helped his team defeated United 2-0.

Without a doubt, Ismaila Sarr has proven to the world that he is the next beautiful promise of his Senegalese generation after Sadio Mane. The rest, as they say, is history.

With his rise to fame and rising to the expectation of the Premier League, it is certain that some fans must have begun pondering on whether Ismaila Sarr has a girlfriend or if he is actually married.

Truth is, there is no denying the fact that his tall-handsome looks, attractive face, heart-melting smile coupled with his success as a footballer wouldn’t place him in the wish list of potential girlfriend and wife materials.

However, behind the successful footballer, there exists a glamorous girlfriend who became the lucky wife of Ismaila Sarr. Below is a photo of Ismaila Sarr and his wife who according to DakarBuzz goes by the name Fat Sy.

Ismaila Sarr took the decision to get married at a very young age- before he made it as a professional. Speaking about the support he gets from his wife, Ismaila once said in an interview with DakarBuzz;

“Fat Sy supported me a lot, long before I made it as a professional player. She made considerable contributions to my career plan as she is the one who manages my diet, my hours of training, and rest too.

I wanted to get married very early, to have stability because the temptations are huge for a football player.”

The video below sums up the deep love Ismaila Sarr has for his wife Fat Sy. Companionship is indeed one of the main reasons why he got married at a very young age.

Getting to know Ismaila Sarr’s personal life away from football would help you get a complete picture of his personality.

Starting off, we begin with his decision to settle down on time. Ismaila Sarr is someone who believes that any prospective young person who wants to have a stable career should endeavor to get married early.

This is needed in order to avoid the temptations of having who had affairs that will ruin their careers.

Secondly, he is someone who employs a methodological approach to life. Sarr is not used to forcing things, believing the right thing would come at the right time. He also likes to get things done at his own pace.

Lastly, on his personal life, Ismaila Sarr at the time of writing does not believe in the ‘Tattoo Culture‘ is very popular in today’s football world.

He portrays his religion in his mosque and keeps his family’s love at heart and not on his body at tattoos.

Despite the initial scuffle, Ismaila Sarr’s parents were glad to have allowed their son to follow his passion which indeed has paid off. Practicing the tailoring profession still helped him in his career. According to Sarr;

“Despite leaving the tailoring profession, I kept in touch with my master tailor and today, he has become my family’s a fashion designer.”

Before traveling to France, Ismaila swore to make his parents proud especially for the sacrifices they made for him.

It was hard for his dad, Abdoulaye Sarr Naar Gaad to deal with retirement from football. Today, he is glad to be living his dreams again.

According to Ismaila Sarr grew up alongside four of his siblings.

He has a brother who goes by the name Papis Sarr who acts like his career counselor and also a sister named Kiné, who is like a second mother to him. Another of his siblings is named Ndèye Ami and the youngest is Badara.

After doing several researches on Ismaila Sarr’s lifestyle, we realize he is just a simple guy who holds on to practical needs that don’t cost much.

Below is the footballer with his countryman Cheikhou Kouyaté and little is known about the ownership of the car behind them.

Deciding between practicality and pleasure is presently not a difficult choice for Ismaila Sarr.

At the time of writing this biography, Sarr has not been seen flaunting exotic cars, big mansions which is easily noticeable by footballers who live flamboyant lifestyles.

He once worked alongside Sadio Mane on Charity: Ismaila Sarr is a footballer who not only shines in the field but also in the Senegalese society.

In the photo below, he is seen working alongside Sadio Mane on charitable causes, as they help the most disadvantaged.

His Pace and Dribble- A Blessing to FIFA Gamers: In FIFA, nobody seems to favor slow players. Using a player that has Pace is a prerequisite whether you’re attacking or chasing an attacker.

Sarr who is aged 21 at the time of writing is a blessing to FIFA gamers when it comes to pace and dribbling ability.

Did you know?… Only Sadio Mane made more successful dribbles than Sarr’s 27 at the 2018 Africa Cup of Nations.

FACT CHECK: Thanks for reading our Ismaila Sarr Childhood Story Plus Untold Biography Facts. At LifeBogger, we strive for accuracy and fairness.