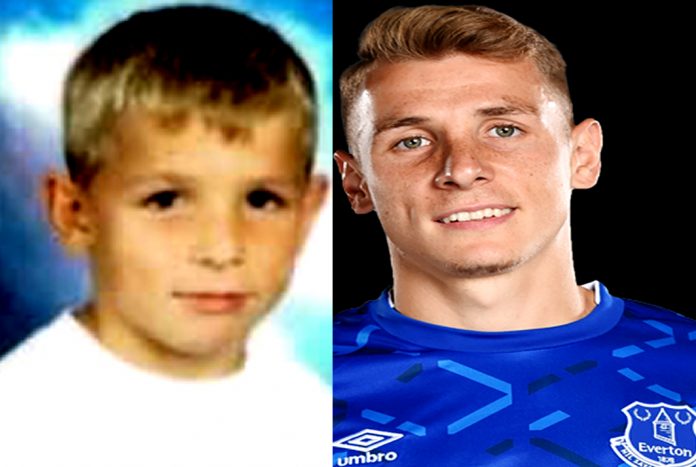 LifeBogger presents the Full Story of a Football Genius best known with the nickname “Luca”.

Our Lucas Digne Childhood Story plus Untold Biography Facts bring to you a full account of notable events from his childhood time to date.

The analysis involves his early life, family background, personal life, family facts, lifestyle, and other little-known facts about him.

Yes, everyone knows of his ability to harass attackers into conceding possession.

However, only a few consider Lucas Digne’s Biography, which is quite interesting. Now, without further ado, let’s begin.

Left-back Lucas Digne was born on the 20th day of July 1993 at Meaux commune in France. He was the second of two children born to his mother, Karine Digne, and to his father, Philippe Digne.

The French national who belongs to the crop of players of white ethnicity with obscure roots was raised at Meaux in France, where he grew up alongside his older brother – Mathieu Digne.

Growing up in his native land in Meaux, France, Digne trod the paths of his older brother Mathieu by playing football at a very tender age.

While Digne was at it, he casually told whoever cared to listen that he would become a professional in the sport and had the perfect mannerism to drive home his point.

As young Digne advanced in height and age, his interest in football became an obsession.

Fortunately, an enrollment at local club Mareuil-Sur-Ourcq provided him with enough space to experience competitive football and, most importantly, tone down his rhetorics about becoming a professional.

By the time Digne was aged 9 in 2002, he joined a neighbouring club, Crepy-en-Valois where he did not only improve on the skill sets acquired from 3 years of training at Mareuil-Sur-Ourcq but remained open to learning more basics.

At the peak of Digne’s football engagements with Crepy-en-Valois, he became practically hard to ignore as his shiny blonde hair became some sort of marker that made scouts from Lille track his impressive positioning during competitive games.

Thus, the 12-year-old football prodigy was brought to the youth system of Lille, where he rose through the ranks in the ensuing 5 years to eventually secure promotion to the club’s first team.

He went on to sign his first professional contract with the French side in July 2010.

For Digne, Lille was not more than a breeding ground as he focused on fulfilling his childhood dream of playing for Paris Saint Germain.

The development explains his quick move to “the dream club” in 2013 after spending two seasons at Lille.

While at PSG, Digne was seemingly set up to pass time on benches. He never got a chance to establish himself at the club where he was made a backup player upon arrival and got used to being an unused substitute in most of his dream side’s important games.

To cap it all, he was loaned to Roma for the 2015/2016 season after spending just two years with the Parisians.

Though Digne spent just a year at Roma, his appearances for the club surpassed what he recorded at PSG in two seasons, neither was he considered a flop at Barcelona where he moved to in 2016 and spent two seasons playing alongside football greats like Lionel Messi.

Fast forward to date, Digne plays for Everton FC after getting signed to the club in 2018. He is no doubts happy on the English side where he has recorded the most number of goals in his career at the time of writing. The rest, as they say, is history.

Digne’s rise through the ranks of Lille remains momentous for him in so many years, especially for the fact that he met his girlfriend Tiziri, during the period.

The lovebirds, who were both 16 years old at the time of their first meeting, became an inseparable pair and went on to get married in December 2014.

Tziri is among other things a fitness and fashion enthusiast who looks forward to building a career in journalism. She recently gave birth to their first child (a son) in April 2019 to usher the family into a whole new world.

Away from the hard tackles, close marking, and ball clearing for the Toffees, family is of greater importance to Digne. We walk you through his family life.

Philippe is Digne’s father. He worked in a printing house at Lizy-Sur-Ourcq near Meaux during Digne’s early life and also played for the first team of the left-back’s boyhood club Mareuil-Sur-Ocrcq.

It goes without saying that he contributed a great deal in shaping Digne’s rise in football and played pivotal roles in his development to date.

Karine is Digne’s mom. Like her husband and sons, she is big on football and once served as secretary of Digne’s boyhood club Mareuil-Sur-Ocrcq.

The loving mother of two keeps close tabs on her sons particularly Digne who recently brought home her latest grandchild.

Digne has a brother identified as Mathieu. The older brother who shares the same childhood story with Digne also had his career build-up at Lille but did not turn professional.

However, he never ceases to support Digne who is committed to making a good name for the family in top-flight football.

Digne has maternal and paternal grandparents who are yet unknown while there are no records of his uncles, aunts nephews, and nieces.

Similarly, the left-back’s cousins are yet to be identified, especially in events of his early life to date.

Yes, Digne has great looks that court attention, it is his personality that captures the heart of anyone who has an encounter with him.

Traits of Digne’s charming persona which take their origin from Cancer zodiac sign include his proclivity for ambition, an exhibition of emotional intelligence, and undying resilience.

His interests and hobbies include sightseeing, listening to music, particularly R&B and Rap. Digne also keeps up with tennis and basketball games as well as spends quality time with family and friends.

A market value of €30 million at the time of writing, coupled with nearly a decade experience of in professional football, has established Digne in the league of high salary earners with amazing net worth.

He lives a luxurious lifestyle that is constantly made evident in his spending patterns, houses as well as an exotic taste of lodging apartment when playing outside the French league.

Perhaps most captivating is his cars collection dominated by brands like Ferrari, Mercedes, and Audi.

Suspecting and knowing are not the same. Please find below lesser-known or untold facts about Lucas Digne.

He has prominent tattoos on his arms. It reads the controversial wordings (I’ll Never Walk Alone). It is on his chest – one that was once misconstrued to be his love for Liverpool.

Setting record straight on the matter, Digne explained that it was a tribute to his parents.

The left-back plays for France national team and has represented all categories from the U16 to U21 levels.

He played for France during the 2014 world cup. And was on standby for the French squad at the 2018 FIFA world cup.

Not much is known about Digne’s position on matters of faith. However, he gives an inkling of being a believer by crossing himself on the field of play.

Such practice is popular among Christians, particularly Catholics.

FACT CHECK: Thanks for reading our Lucas Digne Childhood Story plus Untold Biography Facts. At LifeBogger, we strive for accuracy and fairness.