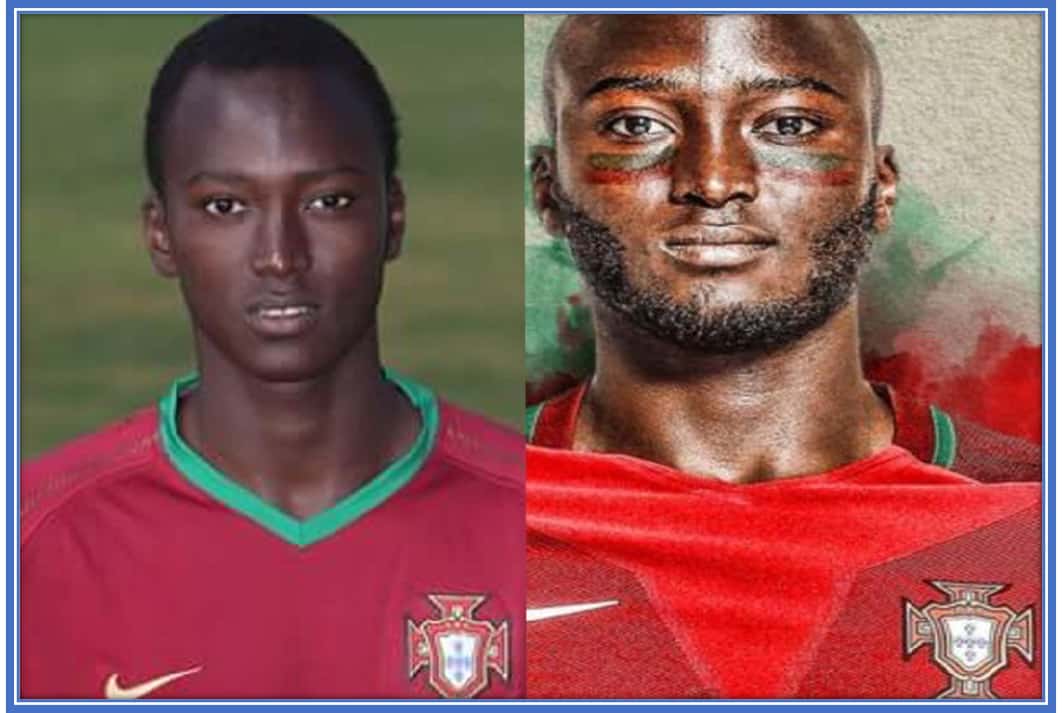 Simply put, this article portrays Danilo Pereira’s History. We present you with the defensive midfielder’s Life Story, from his early days to when he became famous.

To whet your biography appetite, here is his boyhood to adulthood gallery — a perfect summary of Danilo Pereira’s Biography.

Yes, we all know of his special physique, which makes him stand out among many players in the midfield. However, only a few people have read his Bio, which is quite interesting. Without further ado, let’s begin.

For Biography starters, his full name is Danilo Luis Helio Pereira. He came into this world on the 9th day of September 1991 to his father and mother, Quinta Djata, in Bissau, Guinea-Bissau.

The defensive midfielder is the oldest of three children born of the union between his parents. Below is a rare photo of one of his parents.

Danilo didn’t get to spend part of his childhood with his mother. Just when he clocked two years, she migrated to study nursing in Portugal.

Three years later, the young lad and the rest of his family were reunited with his mother as they also moved to Portugal.

As a little boy, the centre-back had a friend (Herlander) from Angola whose family also relocated to Portugal. Both boys loved football so much and often played street soccer with other kids.

They dreamt of days in which they would both become successful players, and their aspirations didn’t remain a passing fantasy.

Danilo grew up idolising Steven Gerrard. He admired the English legend and hoped to make it to the top like him someday.

The midfielder is a native of the West African country – Guinea-Bissau. His country was once part of the Mali Empire as well as the kingdom of Kaabu. It was colonised by Portuguese Guinea and speaks Portuguese as its official language.

Do you know?… His hometown – Bissau – is the capital city of Guinea-Bissau. Its name comes from the native word “Itchassu”, which means brave as the jaguar. According to a population report of 2015, Bissau is home to about 492,004 people.

Apparently, he hails from a home that doesn’t joke with education. No wonder Danilo’s mother flew all the way to Europe to continue her studies in the medical line.

His family is one that is concerned with instilling a good sense of morality in their children. Also, they are an ambassador of peace and lives a contented lifestyle.

As much as the talented athlete loves soccer, he wasn’t one to miss school. He and his childhood friend, Herlander, studied at Mestre Domingos Saraiva.

Their schooling days were full of many challenges that brought the boys even closer.

Sometimes they get to perform so well in their grades, and other times they fail honourably and make efforts to do better afterwards.

From the very beginning, the budding athlete was a shy but talented kid who yearned to be a professional.

At the tender age of 8, Danilo’s parents enrolled him at Arsenal 72 youth Academy, where he began his youth development.

He moved to Estoril by the time he clocked 14 and trained there from 2005 to 2008. His tactical acumen, unparalleled technicality, and high physical potential aroused the greed of Benfica.

In no distant time, the defensive midfielder saw himself joining the youth team of Benfica in 2008. There, the 19-year-old completed his development in 2010.

That same year, he joined the Italian club, Parma, on a free transfer while honouring the clarion call from his fatherland. Hence, Danilo hit the milestone of featuring for his club and country in 2010.

Seeing that he is yet to get a space in Parma’s first squad, the club sent him on loan to Aris and then to Roda.

After helping Roda escape relegation in the Eredivisie, Danilo returned to his parent club as a robust defensive midfielder.

However, he realised that his service was no longer needed at Parma. Hence, he returned to Portugal and joined FC Maritimo of the Primeira Liga. At the very least, he had more playing time with his new club.

At Maritimo, the talented athlete became invincible and helped his team finish sixth place in their league.

As a result, they narrowly missed qualifying for the UEFA Europa League and lost the 2015 final of the Taca da Liga.

But that didn’t stop the media and other prestigious clubs from noticing Danilo’s unbelievable contribution to his team. His biggest breakthrough came as he joined Porto on a 4-year contract worth €4.5 million in 2015.

Moreso, his analytical ability and defensive prowess established him as a usual choice for his National senior Team A.

Of course, he was happy to feature alongside talented players like Joao Moutinho and Bruno Fernandes.

The tackler started winning many awards not too long after he joined Porto. He won the “Dragao de Ouro” award and was Primeira Liga’s midfielder of the month in September 2017.

Upon the departure of Hector Herrera, Danilo became his club captain and led them to win the league title in 2020.

In October of that same year, he joined Paris Saint-Germain on a year loan for a reported fee of €4 million.

However, PSG had a conditional obligation to buy him at the end of the season for a contract sum of €16 million. Truth is, he is quite happy to get to play alongside world-class players like Marco Verratti and Georginio Wijnaldum.

He was one of the twenty-three players chosen by Fernando Santos to play in Euros 2016, held in France. Fortunately, Portugal was victorious and won the competition.

Subsequently, Danilo, alongside Cedric Soares, André Gomes, Renato Sanches, Rafa Silva, etc, added more international accolades to their names. This came as Portugal yet again won the UEFA nations league in 2019. The rest, as they say, is history.

Having a lady who understands him and shares his vision is a blessing to the Portuguese. Yes, Danilo is happily married to his beautiful wife, Jessica Widenby. The love birds began their relationship as boyfriend and girlfriend during his days at Parma.

In June 2019, they both decided to take their relationship to the next level and tied the knot.

Do you know?… Jessica Widenby is just 3 days older than her husband. Moreso, she is Swedish by nationality and has always supported her husband in his endeavours.

Off the field, he was a fun and humble guy. Within him was the personality of a born leader. Even in the days of his youth, many kids depended on his leadership instinct.

The centre-back was an introvert and had a very polite attitude. He loves eating and does not let any opportunity to chill with good food slide. Below is a photo of Danilo having a great time with delicious sushi.

Perhaps his humble nature is one determinant that has influenced how he lives his life.

Apparently, Danilo is not much of a fashionista like Andre Silva. Also, he enjoys living a low-key lifestyle – one that doesn’t attract the media’s attention.

As I write this Biography, there has been no information about Danilo’s car or house. Nonetheless, we are certain that his earnings in soccer can afford him a comfortable house and an exotic ride.

The parents and siblings of the tackler have been committed to helping him succeed in soccer.

Today, the Pereira family reaps the fruits of their boy’s hard work. We present you with detailed facts about every member of his household in this section.

One of the biggest mysteries surrounding his Life Story is his dad’s identity. Of course, Danilo has gained fame in the soccer world. However, he isn’t fond of speaking much about his father.

Moreso, his devoted fans and even the media are yet to find out information about his dad. We hope he gets to set everyone at ease by revealing facts about his father soon.

The centre-back’s mom is Quinta Djata. She migrated to Portugal to pursue a career in nursing. Thanks to her resilience and strong will, Quinta raised her sons to become reliable young men.

At the time of compiling this Biography, Danilo’s mother works at Hospital Amadora-Sintra.

She has been diligent in her job and used her earnings to take care of her family. Of course, the athlete is grateful for his mother’s many sacrifices in raising him.

The talented soccer icon is not the only child of his family. He’s got two younger brothers whom he loves so much.

They are the reason he never had a boring childhood. Also, they were with him at various phases of his career development.

Now that Danilo has become successful in his endeavours, he ensures to return the favour by giving his brothers a comfortable life. We are yet to uncover their names at the time of compiling this Biography.

It is no longer news that he is an introverted person who talks less about himself and his family. Hence, there has been no information about his grandfather and grandmother, as well as his uncles and aunts.

To wrap up his Life Story, here are a few truths that would help you get a complete understanding of his Biography.

Net Worth and Salary Break Down:

Danilo Pereira has seen his earning increases dramatically over the past few years. We have estimated his 2021 Net Worth to be a whopping sum of €10 Million.

As of 2021, the talented player earns an annual salary of €4.7 million at PSG. Based on our analysis, an average Portuguese will have to work for 5 years to make what he earns in a week.

We’ve tactically analysed his salary as the clock ticks. See how much he has made since you came here.

Since you started viewing Danilo Pereira‘s Bio, this is what he has earned with PSG.

Perhaps you are wondering if the midfielder believes in God. The truth of the matter is that Danilo is a Christian, and he is proud of his religious belief.

He may not always talk about his faith, but he has lived his life based on the principles of his religion.

He is just too reserved and care less about body art. Yes, Danilo has a rigid principle concerning tattoos like Cristiano Ronaldo. Hence, he has inked no tattoo on his body at the time of writing this Biography.

Looking at his Stats, Danilo has got a massive reserve of stamina and strength. His heading accuracy and short passing are exceptional too.

Also, the midfielder seems to have reached the peak of his potential. Check out his 2021 FIFA stats in the photo below.

The table below gives concise information about the Portuguese player. It also enables you to read through his Life Story as quickly as possible.

Even when racism became the order of the day, Danilo kept his head straight. He never allowed the prejudice of pessimists to influence his quest for success.

He worked so hard and even attracted some bids from Arsenal, which was later rejected.

Also, the athlete was motivated by the desire to give his family a wonderful life. Hence, he worked so hard to succeed in soccer.

Thanks to his determination to help his parents and siblings, Danilo has achieved fame and wealth.

We hope you enjoyed reading our engaging childhood Story and Biography facts of the Portuguese. Kindly reach out to us if you find anything that doesn’t seem right in this article.