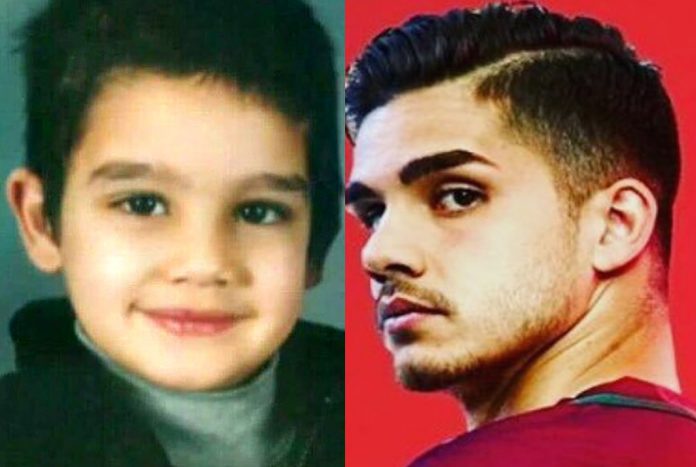 LB presents the Full Story of a Football Genius best known with the nickname “CR7’s Heir”. Our Andre Silva Childhood Story Plus Untold Biography Facts brings to you a full account of notable events from his childhood time to date.

The analysis involves his life story before fame, family background, and relationship life. More so, many other OFF-Pitch facts (little known) about him.

Yes, everyone knows about his good looks. However, only a few consider Andre Silva’s Bio which is quite interesting. Now without further ado, let’s Begin.

Starting off, his full name is André Miguel Valente da Silva. Andre was born on the 6th day of November 1995 to his parents, Mr and Mrs Álvaro Silva in Baguim do Monte, Portugal. 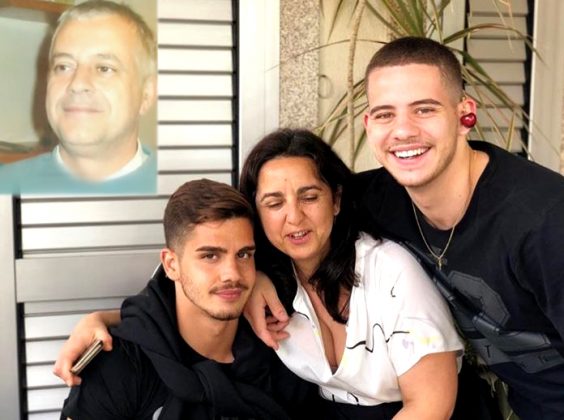 Andre rose from humble beginnings to become what he is today. Both his parents were hardworking people who made sure Silva and his younger brother, Afonso had all they need ed in life.

On a personal note, Andre has always been the caring elder brother who would always look after his little brother, Afonso. Below is a photo of the two brothers during their early years. 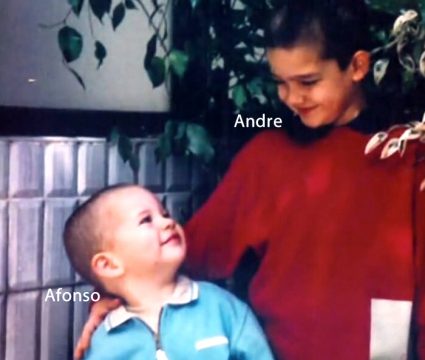 Little Afonso Silva pictured above is presently a professional hockey player who plays with rollerblades. Afonso was born on the 18th day of December 1998.

Asides from living with his parents, Andre also lived with his cousins during his early childhood days. By implication, he has a large extended household, a close-knit extended family who would be together every Sunday.

Andre Silva was very polite, introverted, and very open especially when he picks up a challenge like playing football in school.

After much persuasion, his parents decided to take their introverted six-year-old son to Salgueiros for football. This choice for football location was instigated by his mother who refused to part with her eldest son, still so young. 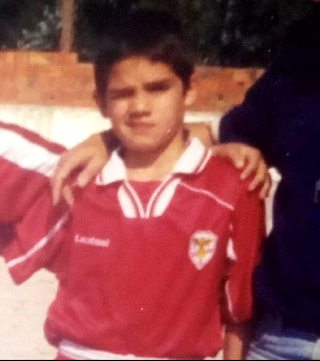 Alexandre Pereira, the then coordinator of the youths of the Salgueiros, recalled that upon meeting Andre, he had the first impression of a very educated sports boy.

He was someone who did not drop the ball until he was forced to go home to meet his parents.

The magical day was when the eight years old went to play a tournament in Viana do Castelo with his Salgueiros teammates pictured below. 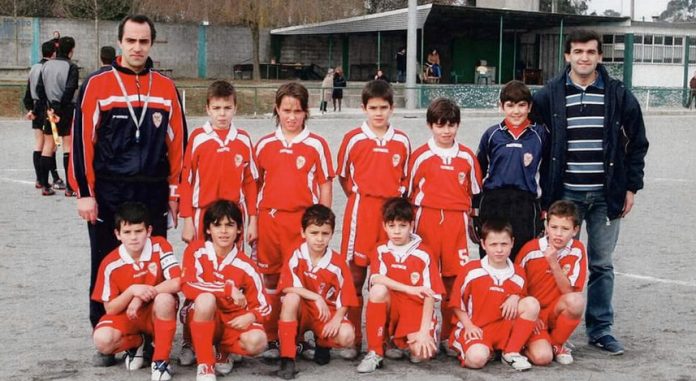 Andre Silva played as a midfielder throughout the tournament. During the knockout phase against rivals youth club Vianense, the match was still in the middle when Magical Silva scored his 15th goal.

This feat earned him the name “Little Deco“. On that match, his coach did something every other coach would do in a bid to show respect for the opposition.

Luís Machado suddenly removed Silva from the team after he scored his fifteenth goal of the match. Machado defended his actions by saying;

“I explained to him that the game was won, we were not there to humiliate anyone and it was good that Andre gives his other teammates a chance”

He is just 8 years, yet he looms larger than life. In less than two years of his entry into Salgueiros, Andre Silva a.k.a. “Mini Deco” became one of the most celebrated child footballers in Porto.

This attracted the interest of Jorge Mendes as his agency Gestifute contracted little Silva. It was a move that added fuel to the fire only instilled in the little boy. 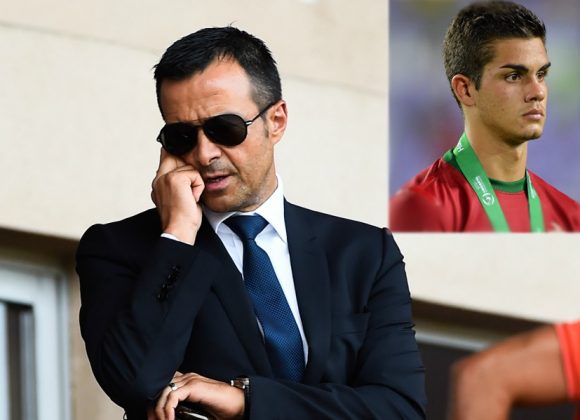 With Jorgie Mendes by his side, Silva saw a successful end to his youth career with Porto after short spells at Boavista and Padroense youth clubs.

Thanks to his youth fame, he also witnessed a flawless passage from youth football to the senior side at the age of 16.

At the age of 18, Silva became the person Portuguese football had been waiting for a long time. He became their desired No. 9 and most importantly, the heir of Cristiano Ronaldo. 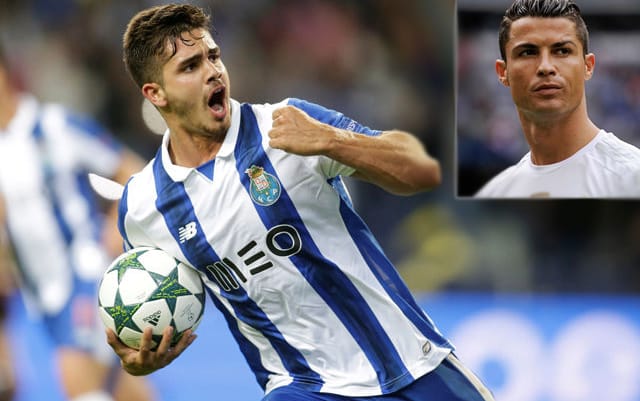 On 12 June 2017, Silva moved to A.C. Milan on a five-year contract for a fee of €38 million. He became the third Portuguese to play for AC Milan after Paulo Futre and Rui Costa. More importantly, Silva also became the most expensive signing in the Italian giant’s history.

Silva battled for form in his first season in Italy. This happened as he once admitted having trouble settling into life at Milan and in Serie A.

After investigations, it was observed that Silva’s biggest issue was him not been able to adapt to the Italian lifestyle and weather. According to reports;

It was a tricky adaptation to a new language, new people, new culture and new team.

Silva managed to score only two goals in 24 Serie A appearances. This poor form backfired as he was pushed down the pecking order. 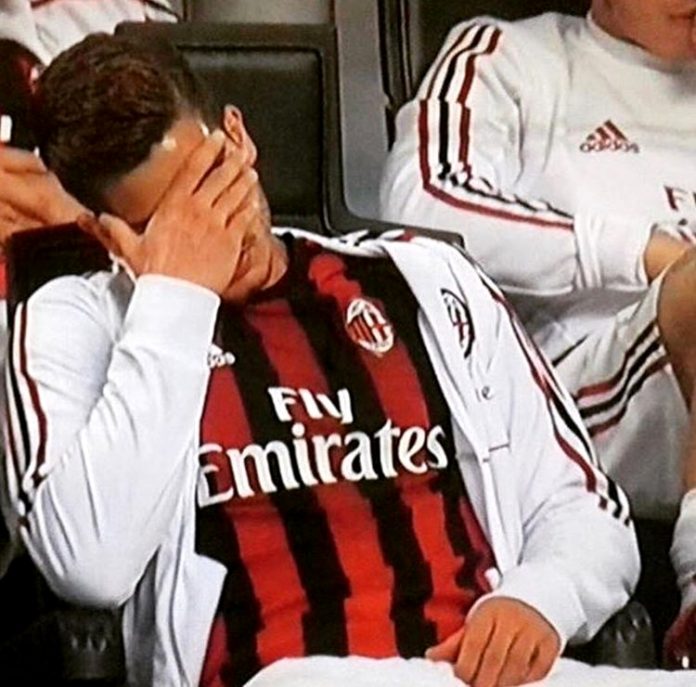 Despite a difficult season at Milan, Andre Silva focused his mind on the 2018 World Cup. In Russia, he created a record as being among the only five players (the youngest) to score at least six goals. 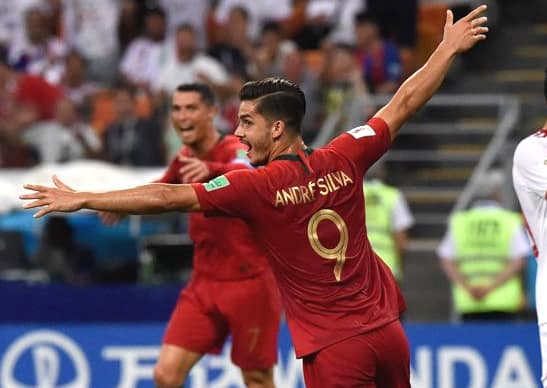 Since the 2018 World Cup, Silva became more than just an Immobile no.9 who simply puts the ball in the net. The rest, as they say, is now history. 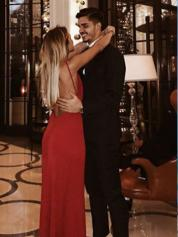 Without a doubt, Silva had scored some beautiful goals. However, the most beautiful goal scored by André Silva is the one that ignited his relationship with Sara Rodrigues, a 21-year-old Portuguese model. 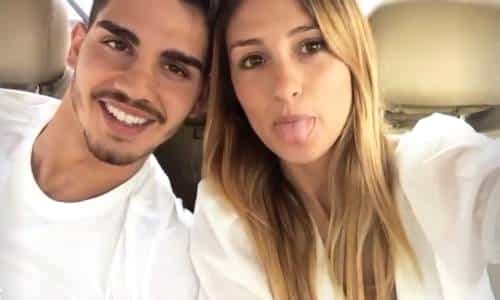 Sara is a graduate of Chemical Engineering which signifies beauty with brains. She has dedicated herself to modeling and traveling between Milan, Rome, Porto, and Lisbon. The couple is believed to be together since his time at Porto.

As at the time of writing, Sara currently amasses an Instagram following of nearly 58,000 people, who can’t get enough of her bikini snaps (see below). 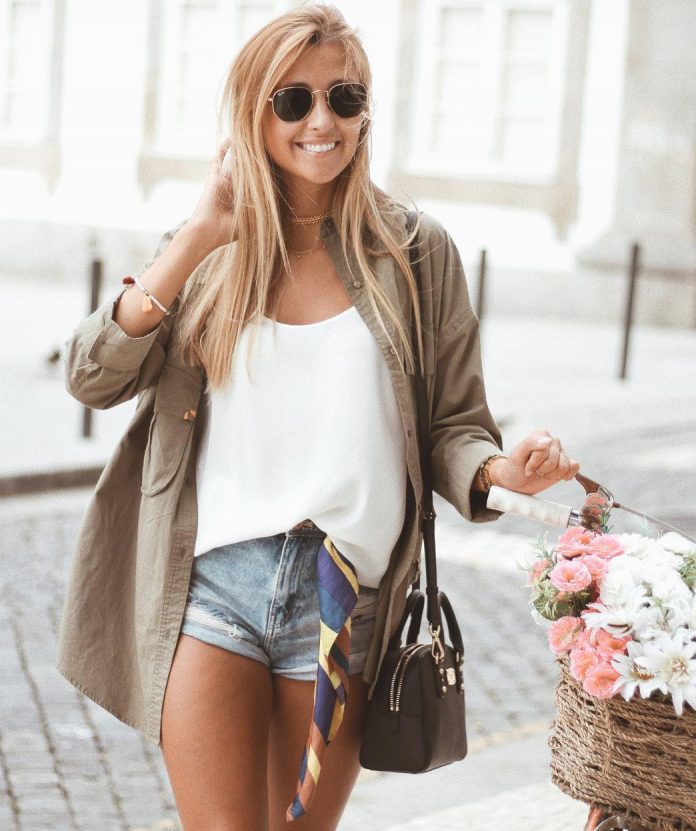 Although Silva is active on social networking sites but refuses to post a single photo of Sara, the love of his life.  It is only a matter of time before both lovers exchange the ring. 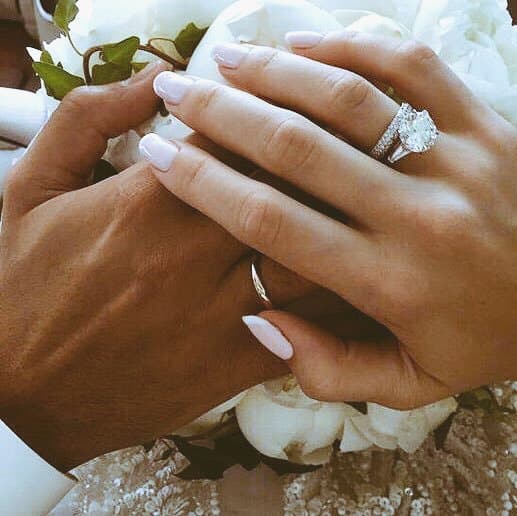 Andre Silva is rumored to have a son found in his arms below as seen in the photo below. As at the time of writing, there is no clear fact as to who the mother of his son is. 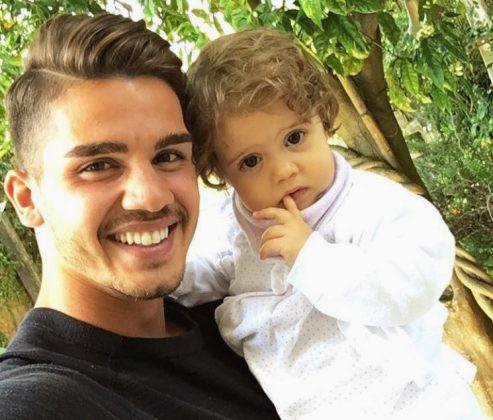 Silva is career passionate with a very assertive mindset. He is a determined and decisive person who will continue to fight until he gets the best out of himself.

You can be sure that Silva will keep your secrets, whatever they may be. During holidays, Silva loves to go hockey with his brother, Andre. 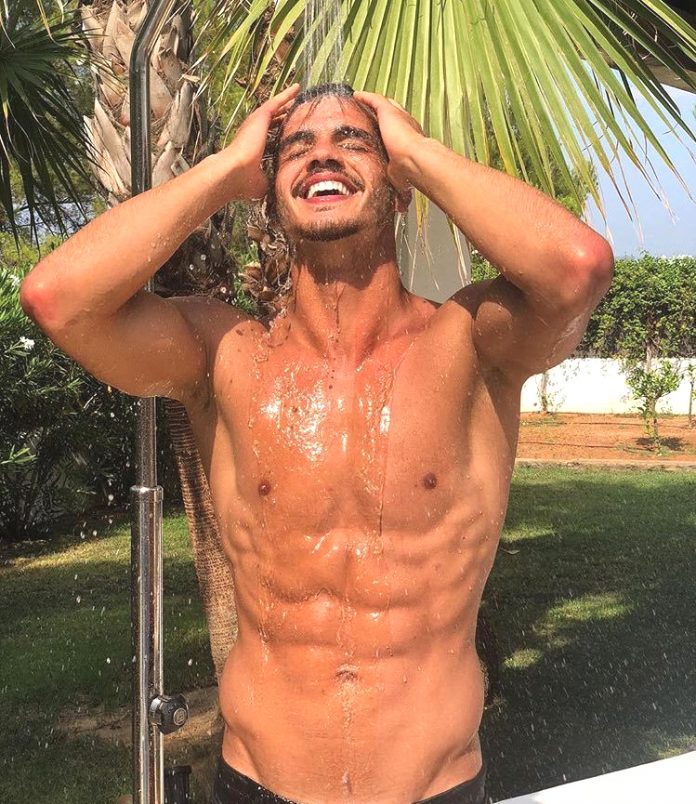 The Water Lover: Andre Silva admits he had trouble settling into life at Milan and in Serie A, particularly when it comes to missing “the beach and sea.”

Upon joining the Italian giants, he once told the club’s official Forza Milan magazine;

“It’s the first time I’ve lived away from my home, my family and the beach. I am accustomed to breathing in the sea air,” 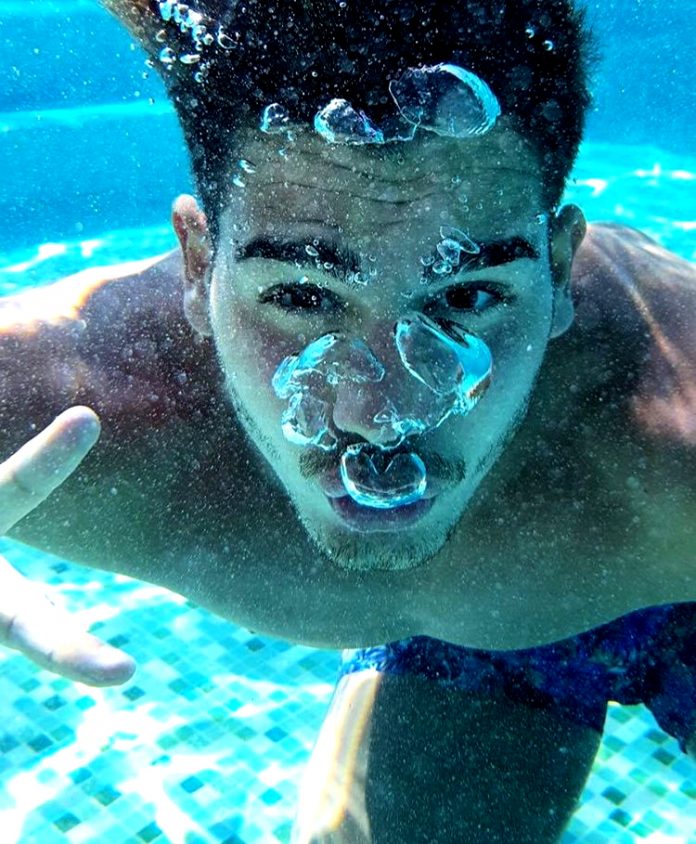 Did You Know?? Being in love with water signifies having fluidly, flowing, a wavering emotions. As water would certainly exert its powerful influence, so does Silva as he does in his career life.

Silva is an intuitive and sensitive person who can take in the feelings of others, process them, and put forth a plan or solution that will be conscientious to all. 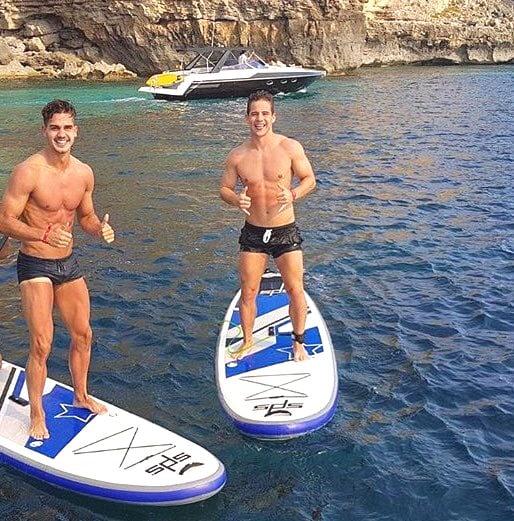 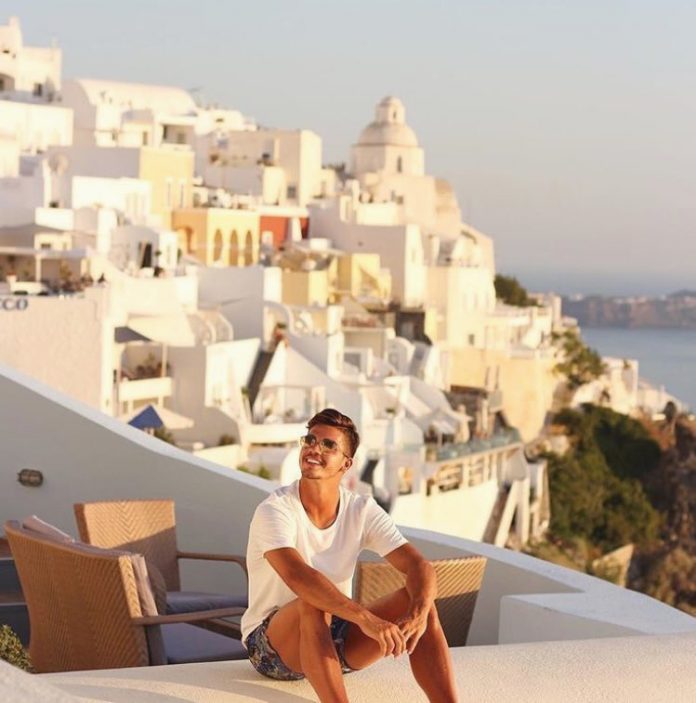 Admit it: Cristiano Ronaldo has also already begun passing the handsomeness torch to Silva. For many football fans, Andre Silva looks cuter than his mentor. 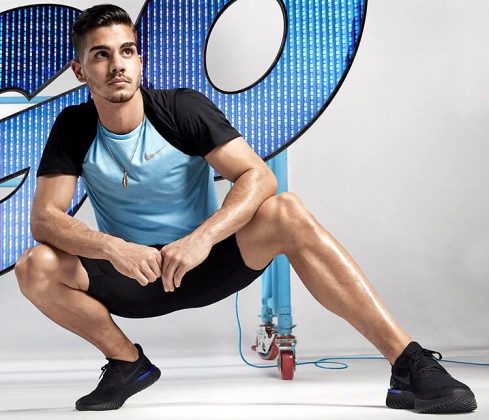 FACT CHECK: Thanks for reading our Andre Silva Childhood Story Plus Untold Biography Facts. At LifeBogger, we strive for accuracy and fairness.