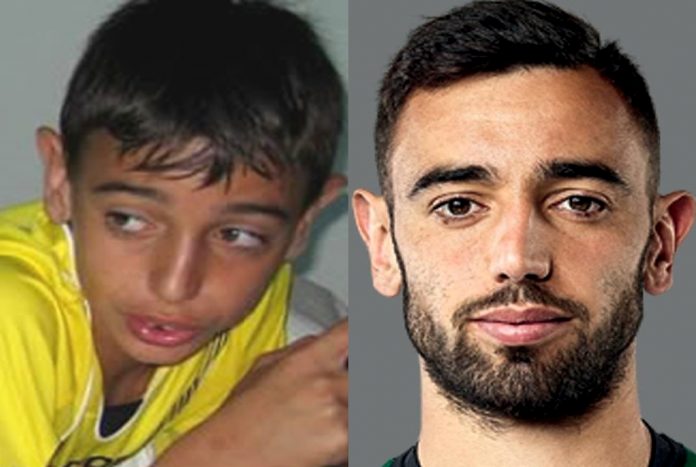 LifeBogger presents the Full Story of a Portuguese Football genius with the nickname “The Portuguese Lampard”.

Our Bruno Fernandes Childhood Story, including his Untold Biography Facts, brings you a full account of notable events from his childhood time to date.

Yes, everyone knows of his ability to create chances for teammates as well as score goals. However, not many football fans have read an in-depth version of Bruno Fernandes’ Biography, which is quite interesting. Now, without further ado, let’s begin.

For Biography enthusiasts, Bruno Miguel Borges Fernandes was born on the 8th day of September 1994 at Maia, in the Metropolitan Area of Porto, Portugal. He was born to parents whom little is known about.

The Portuguese national of white ethnicity with European roots comes from a middle-class family background and was raised in his hometown in Maia, where he grew up alongside an older brother, Ricardo.

Growing up in the municipality of Mai, Fernandes was a rare kind of kid who zeroed in on becoming a football player, a development which his older brother, Ricardo, aptly describes as “having no plan B”.

To that end, the football prodigy was not afraid of anything that might come between him and his dream, as he played football with and against anyone of any size.

For a kid who had irrevocably pledged to become a football player, there was no measure to what Fernandes could sacrifice, including academics, as the youngster dropped out of school before he could finish 11th grade.

Unlike most cases of drop-outs, Fernandes was neither numerically nor verbally weak. In fact, he was an average student who was more concerned with building a career in football at Boavista FC, after having a one-year stint at FC Infesta.

It was at Boavista FC that Fernandes had most years of his youth career. While at the club, Fernandes rose through the ranks and honed skills that are characteristics of his present style of play.

Subsequent football endeavours saw Fernandes earn a move to Novara Calcio where he was promoted to the club’s first team in Serie B after spending only a few weeks with the youth sides.

However, Fernandes’ progress with the club was not without a few challenges. The then 17-year-old, who found it hard to communicate in Italian, became homesick and nearly gave up on his quest to become a professional football player.

However, he later found his foot on Italian soil, thanks to interventions from his friends and family, particularly his girlfriend, who left school and started living with him in Italy.

Moving on, Fernandes got signed to Udinese Calcio in a co-ownership deal and made his Serie A debut on the 3rd of November 2013.

Upon spending three years with the club, Fernandes was loaned to U.C. Sampdoria where he got more first-team action for a year and became a prospect sought after by many teams.

Fernandes lent his signature to the Portuguese side, Sporting CP, in a 5-year deal and has so far established himself as a sought-after midfielder by scoring goals and maintaining an impressive form that saw him named Portuguese League’s Player of the Year in July 2018. The rest, as they say, is history.

First things first, Bruno Fernandes is a married man at the time of writing. We bring you facts about his dating history and current relationship status.

To begin with, Fernandes is not known to have had any girlfriend before he met his wife-to-be, Ana Pinho.

The couples met and began dating at a time when Ana was schooling in Portugal. Several months later, Fernandes invited her to live with and help him achieve his dreams in Italy.

2015 was the year they took their relationship to the next level by getting married on the 23rd of December.

Their marriage is blessed with a beautiful daughter Matilde (born January 31st 2017). It might not be too long before they welcome the addition of a son to their family. 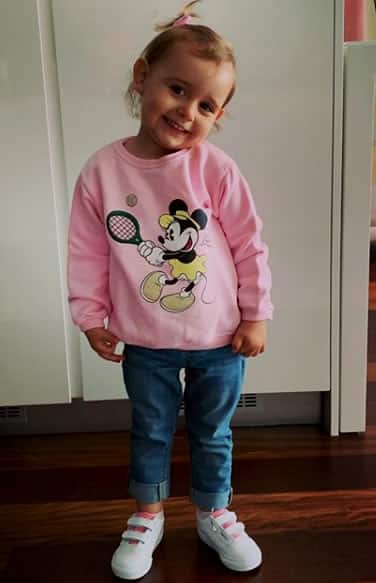 Fernandes’ dad is an ex-footballer who left the sport in order to provide a better life for his family.

Thus, Bruno wears the number 8 jersey to pay tribute to his dad, who wore the same jersey number.

The number 8 is also symbolic of Fernandes’ birthday, as he was born on the 8th day of September.

Fernandes’ mother is a football-loving mom and a fan of FC Porto. She became a passionate fan of Sporting CP following her son’s transfer to the club.

This development was one that is indicative of the age-long support that she has given Fernandes from his early life to date.

Fernandes grew up with a number of brothers and a sister whom little is known about save for his older brother, Ricardo Fernandes.

Ricardo and Fernandes grew up playing football together with the former’s friends.

Away from Fernandes’ immediate family, he has a cousin named Vitor Borges, who once played for Boavista.

Other than Vitor little is known about members of Fernandes’ extended family, including his paternal grandparents as well as maternal grandfather and grandmother.

Similarly, Fernandes’ uncles, aunts, nephews and nieces have not been identified in notable events of his childhood story to date.

What makes Bruno Fernandes tick? sit back as we bring you makings of Fernandes’ personality to help you get a complete picture of him.

To begin Fernandes persona is a blend of the Virgo zodiac traits. He is incredibly hardworking, generous and doesn’t reveal much about his personal and private life.

In addition, Fernandes is known for his intelligence and loves acquiring knowledge on any subject matter.

His hobbies and interests include eating good food, watching all kinds of television shows, movies and even football games. Asides from that, he loves spending quality time with friends and family. 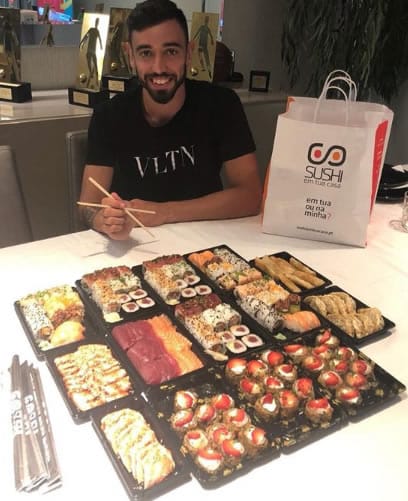 Starting off, Fernandes has an estimated net worth of $2 million and a market value of £31.50m as of the time of writing.

While the origin of his wealth primarily stems from his weekly salary in football, Fernandes enjoys and earns from his endorsement deal with different brands, including Nike.

As a result, the football genius lives a lavish lifestyle that sees him drive expensive cars and live in expensive houses.

In addition, Fernandes makes it a point of pleasure to visit scenic environments and luxurious resorts during vacations.

To wrap up our Bruno Fernandes childhood biography here are little-known facts that are rarely included in his bio.

On the other side, it reflects the letter “F” of his first name Fernandes.

Bruno Fernandes might be close to being transferred to an English side. Credit: TalkSport.

Thanks for reading our version of Bruno Fernandes’ Biography and Childhood Story. At LifeBogger, we strive for accuracy and fairness in our quest to deliver you the Biography of Portuguese Footballers. The Biography of Fabio Silva, Rafa Silva, and Nuno Mendes would interest you.

If you find something that doesn’t look right in Bruno’s Bio, please share it with us by commenting below. We’ll always value and respect your great ideas.