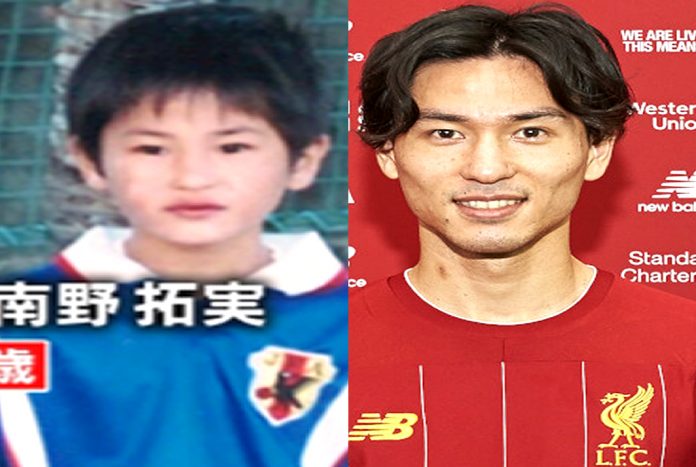 Our Biography of Takumi Minamino portray Facts about his Childhood Story, Early Life, Family, Parents, Girlfriend/Wife to be, Children, Lifestyle, Net Worth and Personal Life.

In a nutshell, we tell you the history of the Japanese professional footballer. Lifebogger begins from his early days, to when he became famous. To whet your autobiography appetite, here is a cradle to rise gallery — a perfect summary of Takumi Minamino’s Bio.

Yes, everyone knows about his versatility, a feat which has led to his rise under as a perfect Jurgen Klopp player. However, only a hand few consider our version of Takumi Minamino’s Biography which is quite interesting. Now without further ado, let’s begin.

As observed below, the Hanshin earthquake was a natural disaster that claimed the lives of 6,434 people from different family backgrounds, with damage of ten trillion yen ($100 billion), around 2.5% of Japan’s GDP at the time.

Being born just two days after a natural disaster made his parents both happy and sad together. Upon his birth which happened in a busy seismic situation, Takumi Minamino’s parents gave him his name “Takumi” which means; “Exploring and Fruiting by himself“. Throughout Takumi Minamino’s early years, his parents reminded him of the need to live up to his name. Speaking about that, he once said in his words;

“When I was small, my parents told me to never lose the meaning of my name. That continually renewed my determination to be successful in what i  do”.

Getting to know the Family: Takumi Minamino has his family origin from the Kinki ethnic group of Japan located in the Kansai Japanese region which occupies 11% of the nation’s land area.

The Japanese superstar hails from a middle-class family background. Takumi Minamino’s parents were like most citizens in the middle of the Japanese social hierarchy, with little financial education. He grew up alongside his elder brother named Kenta Minamino.

Early Life with Football: Takumi Minamino’s likeness for the ball began while he was a toddler. As a little child (aged 1 to 3), he practiced together with his dad and older brother, Kenta. The trio would back then kick the ball enthusiastically inside their family home and garden. The whole football thing got so exciting that Minamino’s dad thought about a practice that saw him placing Training Marker Cones in the family packing lots. This enabled his sons to learn how to make dribbles, BUILDING THEIR DESTINIES IN THE PROCESS.

While in his elementary third grade, Minamino (pictured below) moved on to join Zessel Kumatori FC. At the soccer school, he met and played alongside his best friend Sei Muroya.  Sei Muroya also attended the Kindergarten with Minamino. DESTINY later brought the two together as they found themselves in the Japanese national team. 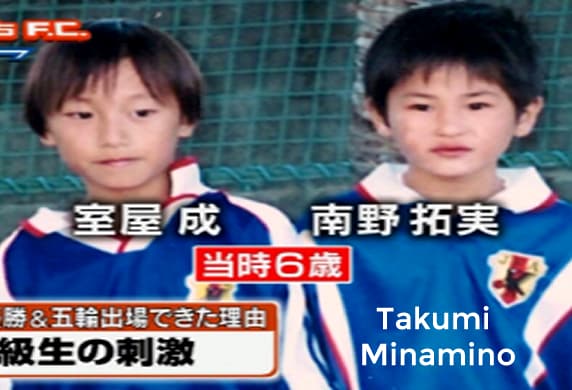 The Decision: In the year 2002 aged 7, Takumi was fortunate to watch Ronaldo Luis Nazario de Lima, Ronaldinho, Rivaldo and other Brazilian superstars in the Korea Japan 2002 World Cup. The tournament created a new chapter in his life. It brought in him a new desire, one which saw him taking a vow to become a professional footballer.

On the need to make a choice between school and football, Takumi Minamimo’s parents agreed with a condition that he would not totally compromise his education for the game. After graduating from elementary school, Minano secured admission with Kokugoku High school Junior youth. While playing football in the school, he got scouted by Cerezo Osaka football club who invited him to their U-15 trials of which he passed with flying colours. As observed below, he had a brilliant start to life with the club.

After high school, the Japanese star took football as his full-time job, abandoning going to the University. Minamino ended his youth career in 2012 after playing for the club for 6 years (between 2007 to 2012).

Winning these awards can only come when you have a mentor and legend as a playing mate. Did you know?… Minamino was honoured to playing alongside legendary Diego Forlan during his early senior years. Both players formed a cool striking partnership.

He took the BIGGEST Opportunity: Takumi Minamino’s biggest stage to shine came when he played against Shinji Kagawa’s Manchester United held in July 2013.

Did you know?… He scored the SUPER GOAL that helped his team defeat United (2-1). Takumi Minamino used game against United to announce himself to Europe, a development that saw big clubs taking notice of him. Below is a piece of video evidence of his SUPER GOAL against United.

Minamino’s success didn’t stop there. Helping defeat United was followed by him earning the MVP in the Nuti Food Cup 2014 competition. Among all European clubs who begged for his signature, it was FC Red Bull Salzburg that prevailed. The club signed Minamino on the 7th of January 2015.

Takumi Minamino began life in Europe on a positive note. During his first season (2017-18), he helped Salzburg to their best ever European campaign. Knowing his low key status with the Unpopular Austrian League, Takumi Minamino use the UEFA Europa League as his best stage to showcase his worth.

The game plan was perfect. First, he helped his team to beat Borussia Dortmund, leading to the club’s first-ever appearance in the UEFA Europa League semi-final. Then became the eye-opener The UEFA Champions League of the 2019 2020 season which saw the perfection of his Minamino’s plan.

Minamino helped Salzburg to have their best ever European campaign in the 2019/2020 season. He together with fellow goal machine Erling Braut Haland proved themselves to be the main dark horses in the European competition. Minamino had an eye-catching performance as he scoring against the Reds at Anfield in the 2019/2020 champions league campaign.

The appreciation of Jurgen Klopp, his Liverpool players, and even the Liverpool fans didn’t go unnoticed as they immediately fell under the magic spell of Minamino. The video below sums up his meteoric rise to prominence. Jurgen Klopp’s reactions to Minamino’s magical displays as shown below is indeed priceless.

To the amazement of football fans especially Japanese and Liverpool supporters, Jurgen Klopp finally won the race for his signature. As I update his Bio, the Footballer’s instinct has brought him his first Premier League goal. The rest, as they say, is history.

With his rise to fame in the 2019/2020 Champions League campaign and joining Liverpool, it is certain that most English fans must have pondered if Takumi Minamino has a girlfriend or if he is actually married.

There is no denying the fact that his good-looks wouldn’t place him in the wish list of potential girlfriends and women wife materials who would yearn for his heart. However, behind the successful footballer, there exists a glamorous girlfriend who according to most Japanese bloggers bears the name Reina. Below is a rare 2014 photo of Takumi Minamino and his girlfriend Reina as they appear all loved up. 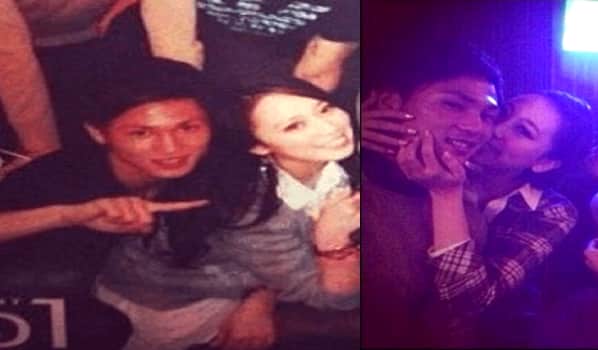 According to rumors, Takumi Minamino’s relationship with Reina began after he broke up with his ex-girlfriend who goes by the name ‘Shiori‘.

Getting to know Takumi Minamino’s personal life facts away from football activities would help you get a better picture of his unique personality.

Starting off, Minamino has a great sense of humor off the pitch. He is very social and loves to spend time with friends and family, especially those that have a similar family origin to his. In his relationship with friends, there is no display of “a king of the jungle” status and career ego. Minamimo’s healthy sense of humor makes collaboration with other people even easier. This is the reason why the Japanese is loved both at home and abroad.

In this session, we bring you extra facts about members of Takumi Minamino’s family starting from his parents.

More about Takumi Minamino’s Dad: Information about the super dad who laid the foundation for his son’s career is poorly documented by the media. However, it is confirmed that Minamono’s dad is 55 years old at the time of writing. The lucky dad is responsible for monitoring every game his son plays and still gives him advises after games. As a way of maintaining their good relationship, both father and son still go to watch soccer together.

More about Takumi Minamino’s Siblings:: Judging from intensive research made, it appears Takumi Minamino has no sister. We’ haven’t gotten any info about his uncle or aunt wither. However, he has an older brother named Kenta and two other brothers who very little is known about them.

Takumi Minamino’s brother Kanta is 3 years older than him meaning he is 27 at the time of writing. Minamino credits his brother for making him never lose interest in football. Sadly, Kenta, unlike his little brother never made himself famous with football. He quitted the game in March 2010 due to unknown reasons.

According to Express Sports, Takumi Minamino’s salary of £2.5m per year can be broken down to a whooping £48,000 per week for wages. These were his figures for Red Bull Salzburg which definitely had been increased after joining Liverpool.

Even thou making lots of money is a necessary evil, Takumi Manamino is a refreshing antidote to an expensive lifestyle. At the time of writing, he doesn’t see himself living an exotic lifestyle easily noticeable by flashy cars and mansions etc.

Minamino lives a humble lifestyle, one that makes him avoids irrational spending and holding on to practical needs that don’t cost much.

A Guinness World Record Holder: According to Japan’s Good person’s daily blog, Takumi Minamino is a Guinness record holder since junior high school days. Did you know?… He once held the Guinness record for “One minute of continuous high touch with the ball“.

He once rejected his Nickname: Some years ago before his fame, Minamino once made clear his own personal preference while addressing his ‘Japanese Neymar’ nickname. Back then, he never accepted the nickname claiming he wasn’t good enough. Minamino once said in an interview to Red Bull Salzburg website;

“I don’t want to compare myself to Neymar at all. Should I ever manage to get as good as he is, then I would gladly accept my nickname”.

Destiny brought his best friend to him: As stated earlier in this article, Takumi Minamino and Sei Muroya are childhood best friends who met while playing football in their kindergarten days. Both took different positive paths along their footballing journeys. They both became successful and fate miraculously brought them together again, this time at the Rio de Janeiro Olympics Games while representing their beloved country Japan.

Without a doubt, the world has witnessed a few of these childhood destiny meetings at national levels. A very good example we are aware of is that between Mason Mount and Declan Rice.

Takumi Minamino Religion: Like most Japanese, it is most likely that Takumi Minamino’s parents raised him to adopt the Shinto or Buddhist religious doctrines. However, the non-existence of photo proofs of his religious practice has made us suggest he could also be an Atheist.

Takumi Minamino Tattoo Fact: Tattoo culture is very popular in today’s football world as it is often used to portray one’s religion or the people they love. Minamino at the time of writing is tattoo-free. As observed below, there are no inks in his upper and lower body.

FACT CHECK: Thanks for reading our Takumi Minamino Childhood Story Plus Untold Biography Facts. At LifeBogger, we strive for accuracy and fairness. If you find something that doesn’t look right, please share it with us by commenting below. We’ll always value and respect your ideas.