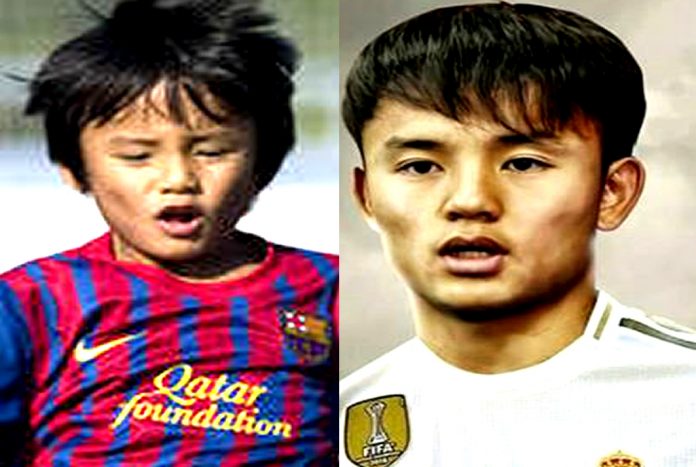 Our Takefusa Kubo Childhood Story Plus Untold Biography Facts brings you a full account of notable events from his childhood time to date.

Yes, everyone knows he is blessed with a brilliant left foot, tremendous close control, and an eye for goal, a reason why he is nicknamed ‘the Japanese Messi’.

However, only a few consider Takefusa Kubo’s Biography, which is quite interesting. Now, without further ado, let’s begin.

Takefusa Kubo was born on the 4th day of June, 4 June 2001 to his parents; his father Takefumi Kubo and his mother in the industrial city of Kawasaki, Japan.

Takefusa Kobo hailed from a middle-class family background. His family have their origin from Kawasaki, a Japanese city famous for its baseball, field athletics, soccer, Indoor facilities, cycling, and horse racing.

Reports from the public domain indicate that Takefusa grew up as the only child to his parents, having no brother(s) or sister(s).

Growing around a sports-loving dad and living in a soccer-crazy city created a natural tendency for him to fall in love with the beautiful game.

Early on, he saw himself being naturally gifted with that cruise control ability on the ball.

Despite having most families raise their kids with the view of having education & finding non-sporting jobs in Japan, Takefusa Kobo’s parents insisted their son would not compromise his soccer education for anything.

At the age of seven, Takefusa Kubo started playing football for FC Persimmon, a local academy based in his home city Kawasaki.

His performances saw him in high demand by other academies in his area, prompting a move to Tokyo Verdi in 2008 and Kawasaki Frontale in 2010. At this time, he began dreaming of European academy football.

Back then, his teachers at his academy knew Takefusa Kobo was destined for great things as they watched him hone his skills, unlike no other kid footballer.

So when he bagged the call-up to attend trials with a top Japanese club linked with FC Barcelona, their pride knew no bounds.

Takefusa’s passion for the game saw him passing the academy trials and joining the Japanese FC Barcelona’s soccer camp franchise team in Japan.

He maintained his style of play as that player who could move past opponents like they never existed.

In August 2009, Takefusa Kobo was awarded MVP for a competition in which he participated at the age of eight.

He didn’t just stop there. Barely a year later, in April 2010, he was also selected on merit as a member of FC Barcelona School team to participate in Sodexo European Rusas Cup held in Belgium.

Did you know? Takefusa Kobo was awarded another MVP in this tournament despite his team finishing third. Many saw this as a sign which signifies he would go far.

In August 2011, the academy invited him to Europe for trials which he passed trials in flying colours. Upon acceptance, they allowed him to begin Barca Alevin C (U11).

Did you know?… During his first full season (2012–13), Takefusa was top goalscorer in the junior league with whooping 74 goals in just 30 games (o yes, you got that right!).

Find below a piece of video evidence of his performance where he nimbled through multiple opponents.

After watching the video, We are sure you’ve agreed that it’s easy to see why Takefusa Kobo has been nicknamed ‘the Japanese Messi’. Place a comment after reading this article to tell us your thoughts.

During the 2014–15 season, Takefusa Kobo was promoted to Barca Infantil A (U14). At this time, his drive and determination became his most valuable assets.

Takefusa’s playing style was like the elegance of a Rolls Royce mixed with the engine of a Mustang.

Everyone saw him having that Lionel Messi attribute that makes the ball tightly attached or glued to his legs. One thing Takefusa Kobo loved was taking down players who were older and bigger than him.

In the wake of the year 2015, Barcelona came under the microscope of FIFA after breaking regulations while signing players to their youth team.

For Takefusa, the road to the first team took a painful dramatic twist when FC Barcelona academy was handed a transfer ban by FIFA for what was termed transfer irregularities.

The club was prohibited from signing Takafusa Kobo hence giving an official order for Barca to have him ejected out of the club.

At first, Kubo spent the final few months of his time in Spain not playing football which led to him facing depression.

Having had enough of this, he decided to leave the club returning to his native Japan. While at Japan, Kobo had a fresh youth start with FC Tokyo Youth team.

Takefusa Kobo even at Japan was still determined to make a high profile move back to Europe, this time, NEVER with FC Barcelona who disappointed him. While at FC Toyko, the prodigious talent got promoted to the club’s senior squad, a proud moment for his parents.

While at the Japanese league playing senior football, Takefusa began breaking records. Did you know?… He became the youngest Player & youngest goalscorer in J-League History. This feat marked his arrival on the professional stage of club football.

The Lasting Journey to Europe:

Takefusa Kobo’s achievement saw him coming on the radar of Manchester City, Bayern Munich and Paris Saint-Germain who wanted him thanks to his brilliant left foot, tremendous close control and an eye for goal.

At first, a deal was reportedly put in place for him to safely go back to FC Barçelona who at that time began begging on their knees for his signature.

Did you know?… Takefusa vehemently rejected the return to FC Barcelona in favour of a move to its rival, Real Madrid. To rub salt into the wounds, Takafusa Kobo cost Real Madrid just £1.78m to sign him from FC Tokyo.

Takefusa Kobo as at the time of writing is ready to prove to the world that he is the next beautiful promise of his Japanese football generation after the country’s legend Hidetoshi Nakata. Now the rest, as they say, is now history.

With his rise to fame and joining Real Madrid, lots of fans have asked the question; Who is Takefusa Kobo’s Girlfriend or WAG?.

As at the time of writing, the possible hidden romances of Takefusa is one that escapes the scrutiny of the public eye simply because his love life is private and possibly drama-free.

It appears Takefusa has preferred to focus on his career and has sought to avoid any spotlight on his private life. This fact makes it difficult for bloggers to know Takefusa Kobo love life and dating history.

However, due to his young age and being acquired by the biggest club in the world which is unforgiven to youngsters who can’t impress, it is possible that Takefusa might be single and might not be dating anyone.

Although we see young people of his age dating, so, we can even guess that he might have a girlfriend but prefers not to make it public.

Getting to know Takefusa personal life would help you get a complete picture of his personality away from pitch of play.

Away from the football scene, Takefusa is calculative, gentle, affectionate, inspiring, never boring and have the ability to adapt and learn quickly to changes in environment and culture.

Takefusa Kobo is always fascinated with the world itself. He is extremely curious, with a constant feeling that there is not enough time. Enough time needed for him to justify to Madrid fans how good he is.

Takefusa is very social and loves to spend time with friends and family, especially younger members. Family is very important to him and spending time builds a strong emotional bond with them.

While the media captures details of his dad, little information exists about his mother. It is assumed that Takefusa Kubo’s mum has made a conscious choice not to seek public recognition.

Deciding between practicality and pleasure is presently not a difficult choice for Takefusa.

Although he believes that making money in football is a necessary evil. Takefusa has a strong grounding on how to keep his finances in check and organized.

As at the time of writing, he does not live a glamorous lifestyle. Especially one easily noticeable by a handful of expensive cars.

The Year TakeFusa was born: The following event happened;

FACT CHECK: Thanks for reading our Takefusa Kobo Childhood Story plus Untold Biography Facts. At LifeBogger, we strive for accuracy and fairness. If you find something that doesn’t look right, please share with us by commenting below. We’ll always value and respect your ideas.