LifeBogger presents the Full Story of a Football Legend best known by the Nickname; “The Complete Package”.

Our version of Rivaldo’s Biography Facts, including his Childhood Story, brings to you a full account of notable events from his boyhood days to when he became famous.

The analysis of the 1999 FIFA World Best Player involves his life story before fame, family life and many OFF and ON-Pitch little-known facts about him.

Yes, everyone knows about his abilities, but few consider Rivaldo’s Biography, which is quite interesting. Now, without further ado, let’s Begin.

For Biography starters, Rivaldo Vítor Borba Ferreira AKA Rivaldo was born on the 19th day of April 1972 in Paulista, Pernambuco, Brazil.

He was born to his mother, Marlúcia Salomão Borba, and father, Late Romildo Ferreira.

Rivaldo was born in abject poverty and had a painful upbringing in the Brazilian Favela slum. This is a low-income area in Brazil characterized by stark poverty among its inhabitants.

Rivaldo’s physical appearance still marks the poverty he experienced in his childhood. This is pictured below as a sign of it.

Back then, malnourishment-caused bow-leggedness in him which still remained when as he turned adult.

Rivaldo was known to have also lost several teeth, which got delayed as a result of chronic malnutrition in his childhood time. Like many before him, Rivaldo found in football a game he loved and a hope for his salvation. However, the hardship of his childhood almost ruined his dreams.

Rivaldo never gave up. He maintained the determination to succeed as a major footballer, despite the doubts of coaches who have feared that his legs were too bow-legged and body frail to withstand the rigours of football.

Despite hearing these words, he still succeeded to become one of football’s top 100 greats.

The soccer legend was previously married to his first wife, Rose Ferreira, for ten years which spanned from 1993 to 2003. His marriage was filled with controversies as he was severally accused of being a cheat. 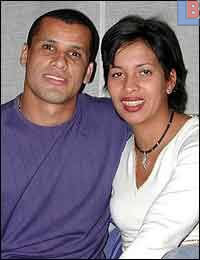 It was reported that Rose Ferreira walked out of their marriage after a cheating scandal that plagued Rivaldo.

The former World Best was dating two girlfriends at that time who came into his life after he got so much fame as in football.

This caused a marriage separation and divorce. Rose became the mother of two of his children (son Rivaldinho and daughter Thamirys) They are pictured all grown up below; 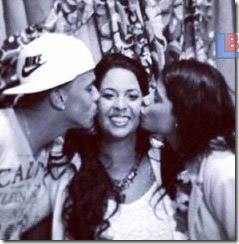 At the time of divorce, when both kids were very young, Rose took them back to Brazil from Milan where her ex-husband played.

This made Rivaldo leave the Milan environment with one of his girlfriends. He finally settled in Greece to play for Olympiacos.

Unfortunately, Rivaldo’s ex-wife is dead. The reason for death is currently unknown. Rivaldo revealed this news in an Instagram post on 14th January 2015.

After their divorce, Rivaldo went to play for Greece, taking one of his two girlfriends. This time, it was the one he loved the most. The one that loved shaving his hair. The chosen woman became the beautiful Eliza Kaminski Ferreira.

She took very good care of him as seen in the photo aside. This made Rivaldo marry her. He also gave her a big stake in the Brazilian club he owned.

Immediately after their marriage, it was announced that Eliza got appointed by her husband as the vice-president of his football club, Mogi Mirim.

Note: Rivaldo owned and also played for this club even at the old age of 43.

Still, on the appointment, Rivaldo made Eliza replace Wilson Bonetti, who was a prosecutor for 20 years and his lawyer that have fought all his legal battles including that of his ex-wife.

More so, according to online records, Eliza was also appointed as a stakeholder of another football club named, R10 Soccer School, LLC still owned by her husband. 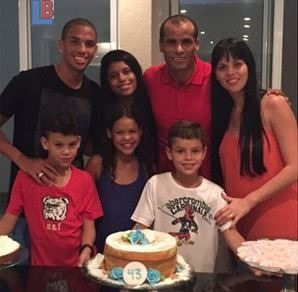 Did you know?… Rivaldo made history as the only father ever to play together with his son (from his late ex-wife) and both surprisingly scored in the same game and in his club. Indeed, for the first time in the history of football, three generations of the Rivaldo family were attached to the game against XV de Piracicaba as the match took place in the Estadio Romildo Ferreira, a stadium named after Rivaldo’s father.

The Rivaldo family has indeed etched their names in the soccer history books and of course, the Guinness book of records.

Note: The Brazilian legend was 43 (pictured above) at that time he came off the bench for Mogi Mirim in a Sao Paulo State league match to join his 20-year-old son on the pitch. In 1999, Rivaldo was at the peak of his career and also won the Ballon d’Or the same year.

The Brazilian and Barca Legend suggested to his then coach, Van Gaal that he should play behind the striker and move from his usual left-wing position.

This did not go down well as Van Gaal questioned his audacity to teach him his job. This resulted in Rivaldo being benched for several games by Van Gaal.

Note: Rivaldo was the world’s best footballer at that time.

The pair who were once friends later became enemies. Van Gaal was once accused of physically confronting Rivaldo during a training session in the picture below.

This made Rivaldo request a transfer to AC Milan.

The Spanish press constantly disapproved of the Dutchman’s decision to bench Rivaldo. When Van Gaal left Spain for the first time, the media including Rivaldo celebrated his departure.

Rivaldo won the World Cup in 2002 with Luiz Felipe Scolari’s men. His winning was dogged by controversy when he got Turkey’s Hakan Unsal sent off after pretending to be hit in the face by the ball when it had been thrown at his thigh.

Tragically Rivaldo’s father Romildo Ferreira was killed in a road accident in 1989.

Romildo had always encouraged his son to pursue his footballing dream and his death was a massive personal blow to Rivaldo who was planning to begin his professional career at that time.

Rivaldo, however, began his career and fought hard to overcome both personal loss and his doubters who always labelled him ‘weak and malnourished.’

He became a professional footballer the same year his dad died.

Little is known of Rivaldo’s mum who is known as Marlúcia Salomão Borba. Reports reveal she has been a housekeeper all her life.

Just like Didier Drogba, Rivaldo never played any youth football. He was also a late starter in his career. In 1994, he switched local allegiances and moved to Palmeiras, helping the club successfully defend its league championship that same year.

Before the 1996 Olympics, Parma announced that they had signed Rivaldo and his teammate Amaral from Palmeiras.

After the Olympics, there was a dispute, and rather than Italy, Rivaldo moved to Spain as he joined Deportivo La Coruña in La Liga.

He later switched to FC Barcelona in 1997 in a record transfer deal securing Deportivo a 4 billion pesetas (around $26 million) transfer fee.

In his first season at Barcelona, Rivaldo won The Double of La Liga championship and Copa del Rey. In 1999, he won another La Liga title with Barcelona.

Rivaldo was named FIFA World Player of the Year and won the Ballon d’Or that same year.

After Barcelona’s unsuccessful Champion League campaign, Rivaldo was linked with a move away from Camp Nou to Milan in the year 2002. His marital issues was also a reason why he left Milan.

Rivaldo decided to return to Brazil in early 2004, by appointment of coach Vanderlei Luxemburgo who convinced him to discard all European proposals.

However, his passage through the team was very short (11 games and 2 goals).

On 22 July 2004, Rivaldo returned again to Europe, joining Olympiacos. He scored 43 goals in 81 games for Olympiacos.

Rivaldo was released by Olympiacos after a dispute with the chairman of the club, who claimed he was too old to continue with the club.

He left and went on to play for a host of smaller clubs before owning his own clubs. The rest, as they say, is now history.

Rivaldo Biography – What he is remembered for: We remember Rivaldo for his extraordinary (and expensive) left foot.

For being among the best in the long line of Brazilian magicians.

We remember Rivaldo for his combination of speed, lethally precise shooting and creative dribbling.

For being able to solve a bad game in one minute.

We remember Rivaldo for being a problem player. A very hard person on salary negotiations.

For being a dead-ball specialist, Rivaldo was renowned for his bending free kicks, and penalty taking.

We remember Rivaldo for his bicycle kicks. I bet you remember this photo very well. 🙂 For being among the ‘FIFA 100’. This was a list of the greatest living footballers compiled by Brazilian legend Pele.

Finally, Rivaldo is remembered for winning the Ballon D’Or as well as the FIFA World Player of the Year Award in 1999.

We strive for accuracy and fairness while delivering the Biography of Classic Footballers. If you see something that doesn’t look right in this article, please place your comment or contact us!