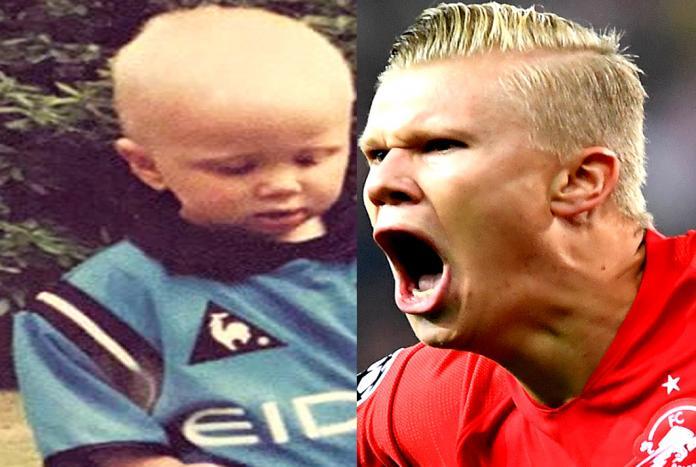 LB presents the Full Story of a Football genius with the nickname “The Manchild”. Our Erling Braut Haaland Childhood Story plus Untold Biography Facts bring to you a full account of notable events from his childhood time to date.

Yes, everyone knows about his unique goal celebration poses. However only a few consider Erling Braut Haaland’s Biography which is quite interesting. Now without further ado, let’s begin.

Erling Braut Haaland was born on the 21st day of July 2000 at the city of Leeds in England. He was the second of three children born to his mother, Gry Marita and to his father, Alf-Inge Harland.

The British and Norwegian national of white ethnicity with little known roots was mostly raised at the city of Bryne in Rogaland, Norway where he grew up alongside his elder brother, Astor Haaland and sister, Gabrielle Haaland.

Growing up at Bryne in Norway, young Haaland was a fun-loving and energetic kid who religiously played football with his friends. In addition, the young football enthusiast had interests in varied physical activities including golf, athletics and handball.

By the time Haaland was aged 6 in 2006, he made the decision to focus on football and was enrolled at local team Bryne Fotballklubb where he conceived the popular vision of becoming the world’s best football player.

But unlike most “world best wannabes” Haaland was absolutely willing to do whatever was required – including working out at a gym – to ensure he made distinguished realities out of his dreams.

Thanks to Haaland’s early competitive instincts, he recorded swift progress through the ranks of Bryne Fotballklubb and made his debut for the club’s senior team as a 15-year-old in May 2016.

It wasn’t long before the football prodigy’s stellar performances impressed talent scouts from Molde Footballklubb who brought him to the top flight Norwich club in 2017. Seemingly synced with Haaland’s interests, Molde helped maintain the lad’s progress tempo by making him play and train with the club’s A team.

However, Haaland was not destined to stay long at the club, neither did he flirt with the juicy idea of entertaining offers from Juventus and Bayer Leverkusen which came bearing potentially disastrous deals.

The way Haaland figured it, more playtime translates to the non-monetary value that was attached to him. Thus, he ignored offers from the super big clubs and signed for FC Red Bull Salzburg which – to all intents and purpose, – had a well-suited environment for his turning point to fame.

Upon arriving Salzburg in January 2019, there was no limit to what Haaland could achieve for both club and country. To start with the striker’s international heroics, he helped Norway’s U20’s team achieve their biggest win by scoring 9 times in their 12-0 victory over Honduras in May 2019. Two Months later, Haaland launched his hat-tricks sprees for Salzburg beginning with a 7-1 win against SC-ESV in the Austrian cup.

He went on to record two more hat-tricks in Austrian Bundesliga games against Wolfsberger AC and TSV Hartberg which ended 5-2 and 7-2 respectively. Haaland’s hat-trick spree gained worldwide recognition in September 2019 when he scored thrice in his UEFA champions league debut for Genk.

The feat – which contributed to Salzburg’s 6-2 victory over Genk – saw Haaland become the third youngest person to score a hat-trick in a UEFA champions league match. The rest, as they say, is history.

Do you know that Haaland is probably single at the time of writing? The closest which the striker got to giving insights into his love life was when he described a man-of-the-match gift ball as his lover and companion for the night.

It goes without saying that Haaland – who has no daughter(s) or sons (s) out of wedlock – is focused on perfecting his thrilling act of scoring goals before he gets a real girlfriend or makes his love life public.

Family has always taken a centre stage in the life and rise of Erling Braut Haaland. We bring you facts about members of his family.

About Erling Braut Haaland’s father: Alf-Inge Harland is the dad of the amazing striker. He was a professional footballer who played for Leeds during Haaland’s early life and went on to ply his trade at Nottingham Forest and Manchester City before retiring. Alf-Inge’s contributions to Haaland’s development in football cannot be overstated. He helped train the striker from the age of 6 to when he clocked 15 and continues to guide him on making key decisions for his future in the Sport.

About Erling Braut Haaland’s mother: Haaland’s mom has been identified as Gry Marita. She is the most private member of the family whose name doesn’t pop out in notable events of the striker’s early life till date. Notwithstanding, she helped raised Haaland and his siblings in a healthy manner and secretly prays for their success by the day.

About Erling Braut Haaland’s siblings: Haaland has just two siblings. They include his older brother Astor Haaland and youngers sister Gabrielle Haaland. Although little is known about both siblings, they are not into sports like Haaland.

About Erling Braut Haaland’s relatives: Moving on to Haaland’s extended family life, there are no records of his maternal and paternal grandparents while little is known about his uncles, aunts and nieces and cousins at the time of writing.

Speak of Erling Braut Haaland personality, he blends the ambitious, resilient and emotionally intelligent traits of Cancer zodiac traits with an astonishing down to earth persona.

The playmaker who hardly reveal details, pertaining to his personal and private life makes the most out of his fair share of 24 hours by engaging a number of activities that pass for his interests and hobbies. They include listening to music, watching movies as well as spending time with friends and family.

Thus, Haarland neither spends big at the time of writing nor live the luxurious lifestyle of accomplished players who have exotic cars and expensive houses. However, there’s no doubt that becoming a big earner would improve on his ability to flaunt wealth given that he is one who has been always receptive to trends.

Before we end our Erling Braut Haaland childhood story, here are lesser-known or untold facts tailored to help you know more about him.

Tattoos: Tattoos are the least of Haaland’s worries at the time of writing. He is rather focused on improving his physique through regular exercise. Indeed he does fancy muscular build and would love to look macho.

Reason behind nicknames: His funny nickname “The Manchild” was given to him in recognition of his superb height and confident manner which he plays impressive football despite being young.

Religion: Haaland’s religion is yet unknown at the time of writing as he hasn’t given pointing indicators to his faith either through interviews or on social media platforms. However, his older brother Astor was once spotted taking photos in a mosque, a development which implies Haaland could be a Muslim.

Smoking and drinking: Haaland is not given to smoking whether cigarettes or recreational inhalants, neither has he been seen drinking at the time of writing. Indeed, he can’t too be careful about maintaining good health.

FACT CHECK: Thanks for reading our Erling Braut Haaland Childhood Story plus Untold Biography Facts. At LifeBogger, we strive for accuracy and fairness. If you find something that doesn’t look right, please share with us by commenting below. We’ll always value and respect your ideas.