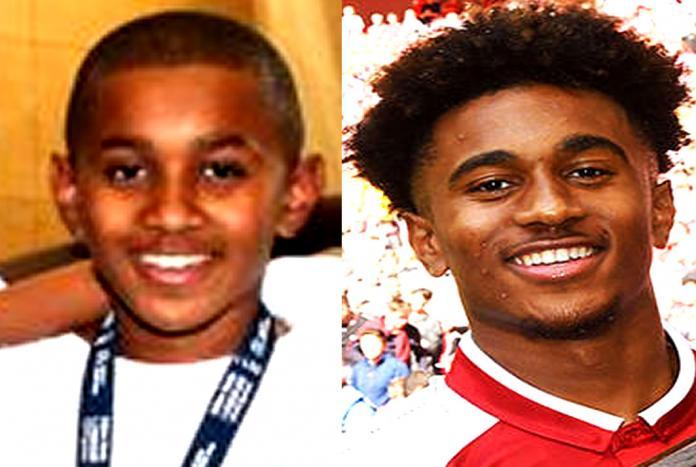 Our Biography of Reiss Nelson tells you Facts about his Childhood Story, Early Life, Parents, Family, Girlfriend/wife to be, Lifestyle, Net Worth and Personal Life.

In a nutshell, we present the history of a Football Genius best known as “Reiss”. We begins from his early days, to when he became famous in soccer.

To give you a taste of the engaging nature of Reiss Nelson’s Bio, here is a pictorial summary of his life.

Yes, everyone knows he is one of those exciting youngsters to have come out from Arsenal’s academy. However, only a few consider Reiss Nelson’s biography, which is quite interesting. Now without further ado, let’s begin.

Starting off, his full names are Reiss Luke Nelson. Reiss Nelson was born on the 10th day of December 1999 to his parents- a Zimbabwean father and an English mother in the Central London area of Elephant and Castle, England.

Reiss Nelson wasn’t raised from a wealthy family background. Also, he wasn’t that kind of kid whose parents were able to afford him the newest collections of toys except for a football.

The youngster grew up alongside his parents and elder brother in Aylesbury Estate. The sprawling Estate pictured below is a world away (completely different) from the booming financial districts which dominate London’s skyline.

In order to avoid the pitfalls of gangs and knife crime, Reiss parents decided to send their son to the London Nautical School near Waterloo.

Early on, there was never much doubt that Nelson was heading in the right direction. He was an intelligent boy who could multi-task with both academics and playing football after school hours.

As far as after school activities were concerned, Reiss wasn’t complete without having his best friend play football with him.

That best friend was no other person than Jadon Sancho– Oh Yes, you heard that!. Sancho whose parents lived at the Guinness Trust Buildings near Kennington Park has been Reiss best friend since their childhood days.

Did you know?… It was on these concrete football courts that Reiss and his close friend Sancho honed their skills as boys. This development saw them getting invited to the London Southwark kids Competition.

According to SkySports. On a chilly autumn evening in south London, both boys (Sancho and Reiss Nelson) played in the competition, to the amazement of fans. Holmes-Lewis, a football coach and mentor once confessed about what he saw;

“When I got to the pitch, I saw this kid ping a 30-yard then cross-field pass to another boy (Jadon Sancho) who then volleyed it straight back to him.

In reaction, I quickly grabbed my two coaches, Cedric [Kobongo] and Ahmet [Akdaj], and said, ‘Did you see that telepathic understanding? That was crazy!!”

Both Reiss Nelson and Jadon Sancho ended up helping their team win the competition, a feat that delighted Holmes-Lewis.

Being successful with local football earned him a call at Moonshot, a local youth academy in his area. While there, he got scouted by Tottenham.

Reiss was at Tottenham for a month before an irresistible call from Arsenal came. His best friend Sancho also got a call from Watford.

The passion both Reiss and Sancho had for football saw them in the year 2007, passing trials and getting inducted into the academy setup of Arsenal and Watford respectively. Beginning his life at the academy wasn’t easy for Reiss.

Back then, he would wake up early to get the train to Catford alongside his older brother. He did that three times a week.

No distance of place or lapse of time could lessen the friendship between Reiss and Sancho. It only took 38 minutes by train and 52 minutes by car for both boys to see each other.

At the age of 14, around March 2015, Jadon Sancho moved to Manchester City. Reiss Nelson continued to make progress with Arsenal as he moved up the ranks very quickly.

Having raced up through the academy ranks, Reiss was awarded his first professional contract by Arsene Wenger on his 17th birthday.

In a bid to get gaming time, Reiss made a critical decision about his career. Jadon Sancho who earlier left for Borussia Dortmund in Germany advised his best friend Reiss to join him in the German Bundesliga.

The English footballer decided to follow his best friends footsteps by going on loan to play with 1899 Hoffenheim, a German club in the German first division.

Reiss Nelson was once celebrated as the top-scoring Englishman through Europe with 6 goals in 7 games, scoring every 54 minutes on average. As observed below, not even Raheem Sterling nor even Harry Kane could beat that.

Nelson’s impact at Hoffenheim earned him a promotion to England’s U21s. It also prompted Unai Emery to place an early recall for the youngster.

Those traits he possessed– the self-belief, work-rate and the determination – which were apparent at Hoffenheim have now served him well with Arsenal.

Reiss Nelson who became the 844th player to represent the Arsenal first team has without a doubt proven to fans he is the next beautiful promise of the club’s English generation. The rest, as they say, is now history.

With his rise to fame, it is possible that some Arsenal fans must have pondered on his relationship status this asking the question; ‘Who is Reiss Nelson’s Girlfriend?‘.

Yes!, there is no denying the fact that his handsome looks coupled with his style of play wouldn’t make him attractive to female fans.

As at the time of writing, he is still single and seemingly focused on his career. Judging from his current lifestyle of the pitch, it appears Reiss is ready to mingle.

It is possible that he might have a girlfriend but refuses to make the relationship with her public, at least for now.

Getting to know Reiss Nelson personal life would help you get a better picture of his person. Starting off, he is a cool guy who loves to display humbleness amidst the fame of modern-day football.

Reiss Nelson is someone who is able to transform his thoughts into concrete actions and will do anything humanly possible to achieve his goals.

Reiss Nelson, although born in England still appreciates his Zimbabwean roots. From what it seems, his father, mother and elder brother have all made the conscious choices of not seeking public recognition.

Very little is known about his Zimbabwean dad, not even his name. However, according to the Arsenal website, Reiss gives once gave his dad some credits for keeping him grounded.

Reflecting on his childhood days, one of Reiss’ best memories is that which concerns his mum.

It’s the moment she would work really hard to buy him Thierry Henry’s jerseys which he wore every day to school, parties and playing on the pitch. Below is a photo of both mother and son having a passionate hug.

According to Arsenal’s website, his older brother is credited for giving up his social life in order to help his younger brother achieve his dream.

His older brother who still remain anonymous (name- unknown) sacrificed so much to get Reiss where he is today.

Whenever Reiss go to parties on a Friday night, his older brother would make sure he was getting enough rest before the weekend’s early starts.

His elder brother would also take him to and from the train for academy lectures, late and early kick-offs.

The soccer star is a fun-loving guy who enjoys making, spending his monies and living his life to the fullest. He sometimes prefers riding jet skis on the waves of the sea rather than having his car on the roads. This sums up his unique lifestyle.

His Best Friends: Asides from Jadon Sancho, Reiss has two of his best friends who are Eddie and Joe. All boys journeyed through the ranks of Arsenal academy becoming successful in their trades.

Religion: Reiss Nelson’s middle name “Luke” suggest he is a Christian by religion and probably inclined with the catholic faith. ‘Luke‘ was the author of the Acts of the Apostles and is the name of the third Gospel in the New Testament.

FACT CHECK: Thanks for reading our Reiss Nelson Childhood Story plus Untold Biography Facts. At LifeBogger, we strive for accuracy and fairness. If you find something that doesn’t look right, please share it with us by commenting below. We’ll always value and respect your ideas.