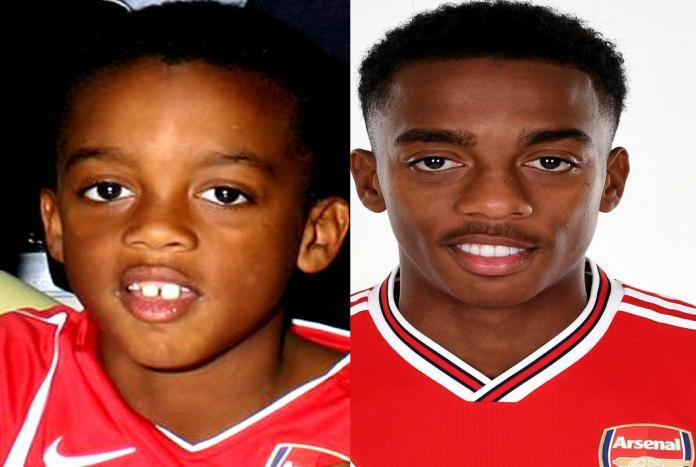 Our Biography of Joe Willock tells you Facts about his Childhood Story, Early Life, Parents, Family, Girlfriend/wife to be, Lifestyle, Net Worth and Personal Life.

In a nutshell, we give you a history of the Football Genius who is best known with the nickname “Joe“.

Lifebogger begins from his early days, to when he became famous in soccer. To give you a taste of the engaging nature of Joe Willock’s Bio, here is a pictorial summary of his life.

Yes, everyone knows he is one of those exciting youngsters with great prospects. However, only a few consider Joe Willock’s biography which is quite interesting. Now without further ado, let’s begin.

Joseph George Willock was born on the 20th day of August 1999 in the London Borough of Waltham Forest, United Kingdom.

Willock was born as the third and youngest child to his parents- a lovely mother and a handsome look-alike father who goes by the name Charles.

According to TheSun UK, Joe Willock’s after his birth was observed by doctors to have a leg length discrepancy. This means that one of his legs was shorter than the other.

Poor Joe throughout the early years of his life had to overcome both physical and mental troubles caused by this deficiency. This affected his speed to date and is the reason why he isn’t the best of sprinters.

Although he was born in England, but Joe Willock’s family are of Afro-Caribbean descent. They have their family roots from Montserratian, a British Overseas Territory and Island in the Caribbean.

As observed below, Montserratian is an island greatly disturbed by volcanic eruptions during the mid-1990s.

Between 1995 and 2000, Volcanic eruptions forced two-thirds of the island’s population to flee, primarily to the United Kingdom.

Little is known whether Joe Willock’s parents were among those that fled to the United Kingdom before Joe their son was born in 1999.

Early Life: Joe Willock grew up in Waltham Forest alongside his two brothers named Matty and Chris. Back then, his family home, located in the North East of London wasn’t too far from Arsenal’s former stadium Highbury.

This proximity factor led to the formation of a football-crazy household. The passion for the game made all three boys (Matty, Chris, and Joe) making up their minds on the need to become professional footballers when they grow up.

Joe Willock came from a below-average family background. Both his mum and dad weren’t rich and they often struggled to keep their family going. Charles and his wife once gave up their jobs to see their kids get successful.

The Influential Father: Charles Willock, the football-crazy dad and the driving force of his family trade decided to embark on the journey of turning his three sons into footballers.

Charles taught Joe and his brothers never backed down from any challenges, taking them to different football parks for training and participating in competitions.

He influenced the destinies of his sons and did everything possible for them to pass trials with top football academies.

The Lucky dad saw his vision for his kids working out as he wanted. Matty, his first son was first called up for trials with Arsenal academy, Chris and Joe Willock followed next.

The joy of the entire family had no bounds after seeing all three boys passing trials in flying colours and getting inducted into Arsenal’s academy.

Joe Willock passion for football saw him signing his first contract with Arsenal at the age of 4. For his serious-looking dad Charles, it was all about ensuring at least one of his sons makes it to the first team.

All three brothers- Matty, Chris and Joe all made the grade in the Gunners. They dreamt of becoming the first trio of brothers to play in the Premier League together.

Their dad Charles gave up his job not just to accompany his sons to the academy, but helped them manage their burgeoning football careers. As Joe Willock once put it;

“Growing up, my dad was the only person I ever cared about commenting on my matches. After the games, he tells me whether I’ve played good or bad. I don’t really listen to anyone else except my dad”.

All three brothers progressed through the age groups until the unexpected happened to one and later, two of the Willock boys.

Not all things went well for the Willock boys during their formative years with Arsenal. Joe’s brother Matty was released at the age of 15 due to unsatisfactory performance.

Chris, on the other hand, decided to leave in 2017, headed to Portugal to continue his career. Joe Willock was the only person left behind. Speaking about the experience, he once said;

“It was necessary for me and my brothers to split up and go in different directions. I saw that coming. I knew the time was going to come, one day where we weren’t all going to be together. It didn’t make it any easier for me when Chris went to Portugal.”

For Joe, It was really difficult for him to take when his immediate elder brother Chris left for Benfica. Both brothers who were the closest had always been together since they were born.

“We had always shared the same bedroom. This explains our closeness.  When Chris left, it felt like a piece of me had left our family household” said Joe Willock who struggled with his football during those moments.

His first sporting success came just before he ended his youth career. This was a time he helped his U17 teammates in winning The Future Cup.

In 2017, Joe Willock got called up in the Arsenal senior team. That year he acquired his first medal (The 2017 FA Community Shield) without actually playing in the competition.

The Defining Moment: Joe Willock’s standout moment in an Arsenal shirt came in May of 2019 when he replaced an underperforming Mesut Ozil in the Europa League final.

The appreciation of Arsenal fans didn’t go unnoticed as they were keen to see him become a first-team regular.

But rather than crumble, the midfielder grew from strength to strength. Joe Willock’s next standout moment came during the 2019 International Champions Cup.

This time, he got a brilliant performance against Bayern midfielders. Willock used this match to send a statement to fans that he could compete with the very best.

Joe Willock at the start of the 2019/2010 season continued to endure a meteoric rise with Arsenal. He saw himself becoming one of the hottest midfield properties in the club, a feat which earned him a long-term contract with the club.

A once upon a time, a little boy who joined the Arsenal aged four, later on, left alone to fly the Willock flag without his brothers, is now living his dreams. The rest, as they say, is now history.

With his rise to fame, it is possible that lots of fans have pondered on the question; Who is Joe Willock’s Girlfriend?. There is no denying the fact that his cute looks wouldn’t make him a darling vine to ladies.

At the time of writing, it appears Joe Willock has preferred to focus on his career leaving no clue on having a girlfriend or wife. However, there exists a rumor which suggests he once had a girlfriend.

The Allegation: As reported by TheSun, Joe Willock was once accused of following in the footsteps of former Arsenal bad-boy Ashley Cole — by scoring with the ace’s ex-girlfriend. Joe’s actions saw fans seeing him as developing a bad-boy image off the pitch.

According to TheSun, It was alleged that Joe Willock invited her to London, bought Eurostar tickets for her and took her to an exclusive nightclub where they both downed drinks worth £2,500.

Afterwards, both Joe and his girlfriend returned to a rented apartment in Kensington where they spent the night together and there, he was pictured smoking hi*py cr*ck.

Getting to know Joe Willock’s personality would help you get a more complete picture of him.

Even with simple looks, Joe is someone who puts so much energy in his quest to achieve almost anything he wants to and in any area of life he commits to.

Also on a personal note, Joe Willock appears to be a changed person, one who appears to follow the path to righteousness thanks to his religious beliefs.

The photo below sums up his Religion believes and the fact that he comes from a Christian home.

Without a doubt, the Willock family is seen as among very few successful football families with the most humble of beginnings. Here, we bring you some extra information about all family members.

Joe Willock Father: We all know about Charles efforts in making sure his sons become professionals, thus seeing him as a manager to his sons.

However, according to Tribal Football, Charles Willock is also a football commentator with a subscription to Wyscout, a football platform that provides him digital info and analysis to more than 1,000 clubs.

This platform allows him to track his sons’ games along with other footballing business areas. “He looks at all our games and every individual clip over and over again,” said Joe Willock

Joe Willock’s Mother: Little is known about Joe’s mum as it is assumed she lives a very quiet life.

This doesn’t stop her last son Joe from acknowledging her publicly with a sweet message on his Instagram which goes in his words;

Mama, this was for all the time I saw you work that late shift, and the time you used to NOT eat so I could eat. The times you used to sing to me to fall asleep in your arms after which you came back from work. I love you Mama. Happy Birthday!!

Joe Willock Brothers: Did you know?… Willock’s two brothers- Matty and Chris didn’t just get thrown off from Arsenal without joining better clubs.

When Matty was released at 15, he got lucky passing trials with Manchester United before later leaving for Gillingham. Chris, on the other hand, took his trade with Benfica after swapping London for Lisbon.

Deciding between practicality and pleasure is not a difficult choice for Joe Willock as he knows how to manage his finances in check.

Thanks to a good grounding from his parents Joe does not live a glamorous lifestyle easily noticeable by a handful of expensive cars.

THE THREE BROTHERS ONCE LIVED THEIR DREAMS: Did you know?… All Three brothers once played together in a Premier League Match.

Despite the range in ages, the three did play in one match in The Premier League 2.

Matty pictured above played in the Red Devils shirt and the youngest (Joe Willock) came off the bench to join his brother Chris in a Premier League 2 game which happened around the month of May 2017.

The Wizard of Oz: Some fans call him the Wizard of Oz simply because he together with Dani Ceballos are among those midfielders who are determined to displace Mesut Ozil from his position as a first-team player.

Ozil on several occasions had watched over his shoulder because of competition for his place.

FACT CHECK: Thanks for reading our Joe Willock Childhood Story plus Untold Biography Facts. At LifeBogger, we strive for accuracy and fairness. If you find something that doesn’t look right, please share it with us by commenting below. We’ll always value and respect your ideas.