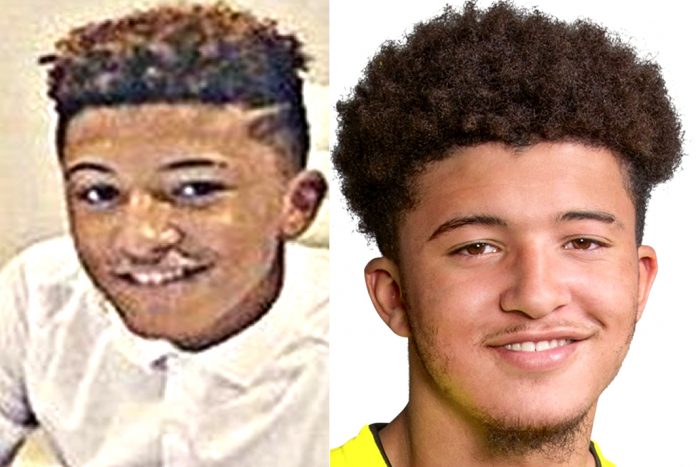 LifeBogger presents the Full Story of an English Football Genius, best known by the nickname “The Rocket“.

Our Jadon Sancho Childhood Story plus Untold Biography Facts bring you a full account of notable events from his childhood time to date.

Yes, everyone knows about his rapid rise in the Bundesliga. However, only a few consider Jadon Sancho’s Biography, which is quite interesting. Now without further ado, let’s Begin.

For Biography starters, Jadon Malik Sancho was born on the 25th day of March 2000 to his parents, Mr and Mrs Sean Sancho, in Camberwell, South London, United Kingdom. Judging from his looks, you’ll know he is from a mixed-race background.

Actually, Jadon Sancho’s parents are from Trinidad and Tobago. Both made a decision to move to England to have their son.

His Dad and Mum raised him in Kennington district, South London. Growing up with his sisters, he attended Harefield Academy located in Northwood (home area of Crystal Palace Football club) London.

While in school, Jadon’s passion for soccer saw him enrol in the roster of his local school team, where he got the opportunity to play competitive soccer during sports period.

The Street Life – After School Hours:

Away from school, Jadon Sancho didn’t rest. He was one among other endangered species of footballers who learned, developed and honed their skills playing football on the streets and in back alleys (Bundesliga Report).

It was his participation in football that steered him away from the poor choices he would have made as a child. Speaking about such, Jadon Sancho once said…

“After school, I just wanted to play football on the streets.

All around me, there were people who did bad things, but I never wanted to deal with them.”

Said Sancho. As he once admitted, it would have been easy for him to slip into less savoury surroundings.

Both friends lived nearby his London home and would all go out to play soccer.

While playing football together with other friends as opponents, a certain London coach by the name Sayce Holmes-Lewis stormed the area.

He took an interest in the kids. Speaking about what he saw, Holmes-Lewis confessed…

I thought these boys are mad. They were just making their opponent look stupid with their nutmegs and telepathic connection in their skills.

Holmes-Lewis didn’t only hype the boys but decided to use his football connections to get them a career opportunity.

Jadon Sancho joined Watford at the age of seven, thanks to the help he and his friends got from Holmes-Lewis.

Due to the issues with commuting 21.6 miles from Kennington to Watford Football Club Training ground, Sancho had to seek accommodation which was provided by Watford. 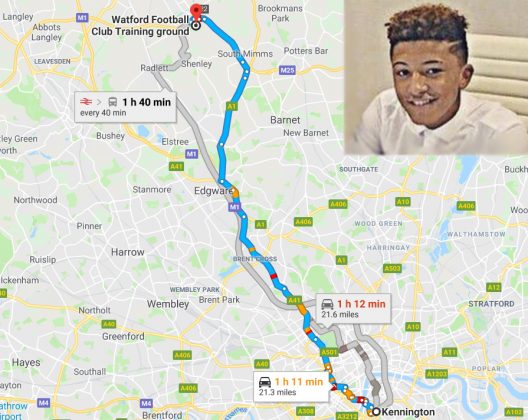 In other to continue his education, he began attending Watford’s partner school Harefield Academy as a boarding student.

Holmes-Lewis, the man who helped Jadon and his friends, had a position as a community coach for London’s Southwark Council.

He trained Sancho and his friends in his team of South London’s most talented kids. Holmes-Lewis’ aim was to have them take part in a London youth football event.

Luckily, he guided Jadon Sancho and his friends to win the under-11s competition at the prestigious event.

Below is Sancho, with his friends having their winning medal in their next. He is positioned far-right and close to Holmes-Lewis.

Sancho, at the age of 11, began turning down the chances to join Chelsea and Arsenal just because he preferred Watford’s setup that allowed him to train more regularly and go to school.

This was a time he began to prove to his academy how good he was. Sancho, pictured below, did that in a humble way. 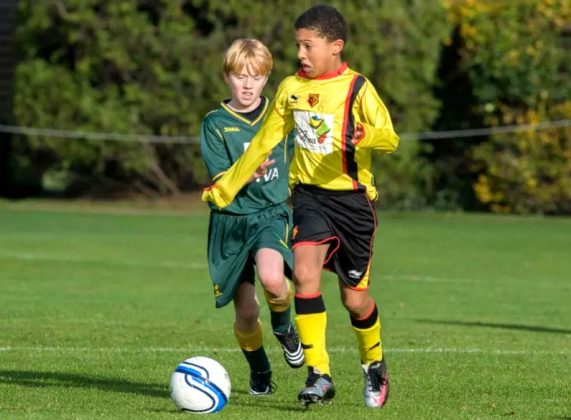 As he was approaching his mid-teen years, Sancho began the habit of flicking through YouTube videos of Ronaldinho and Neymar. He did more of that, rather than focusing on his schoolwork at Watford.

“Each time I walk past his screen, you’ll see a page which shows clips of Ronaldinho or Neymar doing skills,” says Louis Lancaster, Watford’s then under-15s coach.

Even those who knew Sancho back then would often call him “a ball entertainer” who had similar qualities to the players he idolized.

His ability to manipulate the ball like a magician attracted scouts and led to him being continuously scouted by premier league clubs.

In the end, Jadon Sancho, after consulting his family, decided to pen a deal with Man City in 2015. 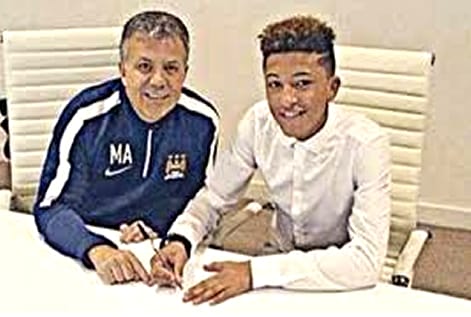 At the age of 14, Jadon Sancho moved to Manchester City, where he continued to impress in their academy winning youth honours and awards to his name. 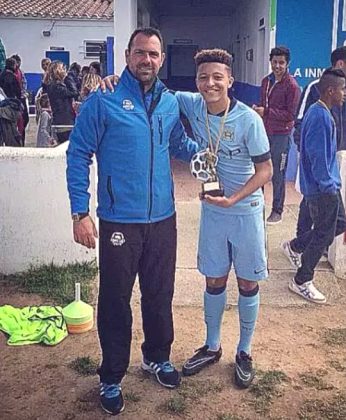 He was one among a few of the city’s academy players who got the assurances of being fast-tracked into the club’s senior setup by Khaldoon Al Mubarak (City’s chairman). This promise was fulfilled and was finally made.

The Big Decision- The US Tour:

It was just hours before City was to depart for a tour in the USA in the summer of 2017.

While everyone was prepared to board the plane to the United States, Jadon made up his mind to become an exception hence he won’t be following the team on the tour. 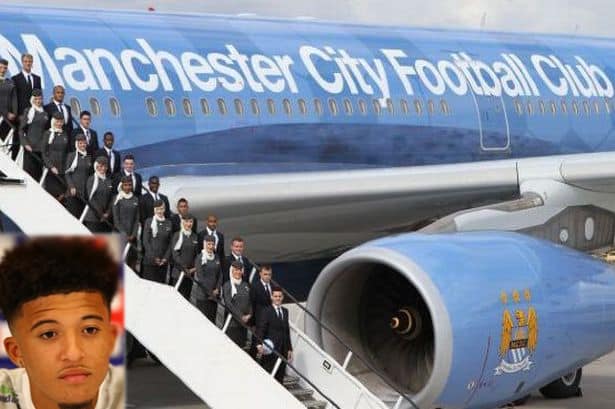 Sancho insisted he needed a new challenge and that he was tired of not getting enough playing time.

This left Pep Guardiola stunned as he had already prepared a new deal for him. Sancho displayed seriousness in his decision as he went back to continue training with the club’s youth team, which he once belonged to.

“In the last two or three weeks, Sancho didn’t appear in the training sessions. He was supposed to come, but he didn’t,” said Guardiola.

“We tried a lot. We met and begged his father, mother and his manager but if the player says ‘no, no, no, no, no’, what can we do?”

Leaving his mum and his sisters behind was so hard for Sancho, who travelled with his dad Sean to finalize his German contract.

“I miss them a lot, but I wanted to do what’s best for me. I felt like moving to Germany was the best thing for my career” said Jadon Sancho as he once narrated his Story.

Sancho signed for Bundesliga club Borussia Dortmund on 31 August 2017 under a contract agreement that he would be included in the first-team squad.

This contract agreement was honoured by the German club, who saw him as a replacement for Ousmane Dembele. 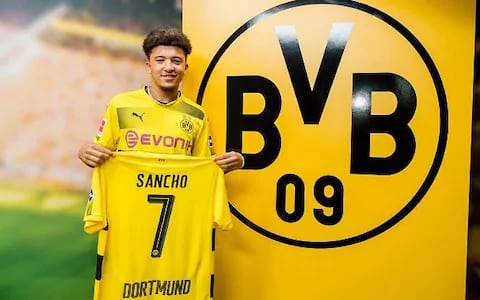 Living in Germany wasn’t easy for Sancho as he initially struggled to learn the German language.

Proving a Point to City:

In the summer of 2018, Sancho finally proved his point to his old club. This time, he is going to the United States with his BVB team to play against his old club, Man City. 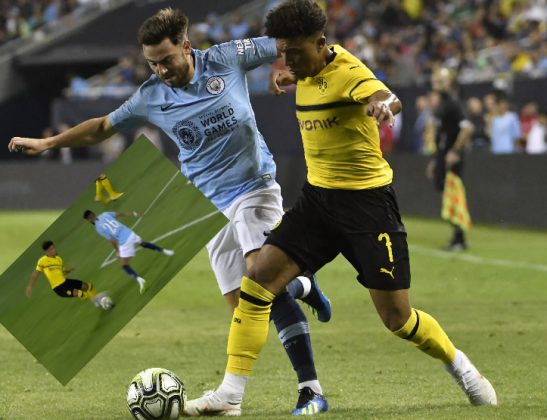 “I had a point to prove and I think I did well,” he said after his BVB side defeated City’s 1-0 win in Chicago.

Moving on to the 2018/2019 season, it took no time before Jadon Sancho became the most electrifying young player, one who was labelled “an assist king” in the Bundesliga. 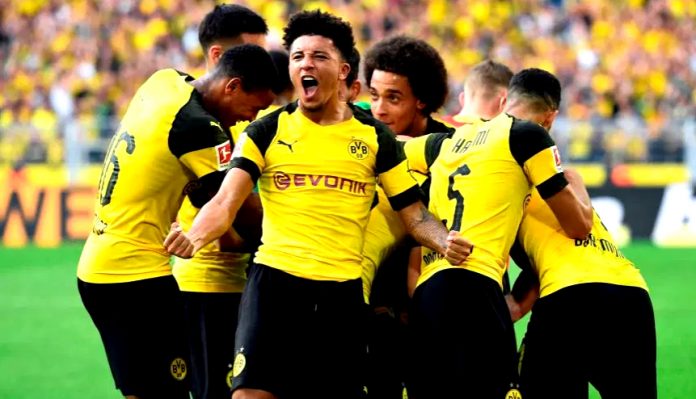 Sancho was a dynamic and standout player who tore up the Bundesliga. He became Europe’s most exciting prospect after a series of displays in the video below.

With these performances, Sancho’s name was forced into the England squad by Gareth Southgate. The rest, as they say, is history.

Who is Jadon Sancho Dating? 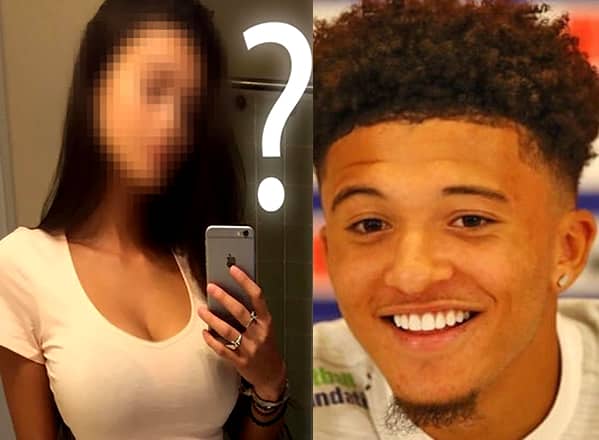 The romances of Jadon Sancho escape the scrutiny of the public eye simply because his love life is very private and possibly drama-free. Sancho, at the time of writing keeps a low dating profile.

Getting to know Jadon Sancho’s personal life would help you get a complete picture of him. Starting off, he is someone who has a determined, driven, competitive character.

Right from his city days, Sancho has proven to the world that he surely loves challenges. His presence among his peers marks the beginning of something energetic and turbulent. 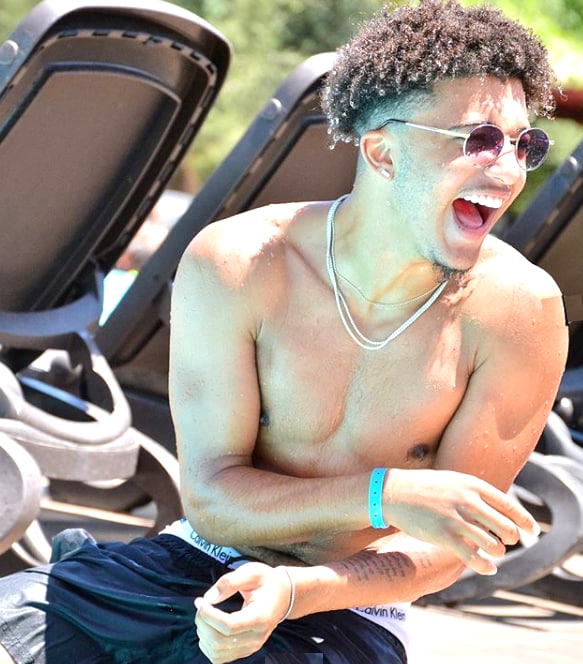 Asides from football, Sancho also loves to sing to rap music. This talent was first spotted when he and Aubameyang once danced and rapped to the parody music ‘Mans Not Hot‘ in a car. Watch the video below;

Having supportive parents is essential, and Sancho’s father whose name is Sean, is widely described as a good father who has done his best to keep his son focused.

Sean is always dedicated to Jadon’s career success, even to the detriment of his job.

The fact that Jadon Sancho had stayed on track is a credit to his lovely parents, sisters, and relatives who have stood by him. 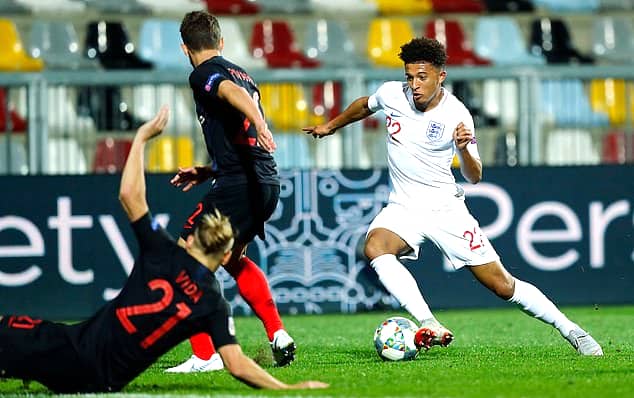 English fans sang praises of Jadon Sancho as he won the record of becoming the first player born in this millennium to play for England.

This happened in his debut against Croatia in October 2018. Below is a photo of the England star on his debut as he beats Croatia defender Josip Pivaraic before firing in a cross.

Deemed to Important for Dortmund:

After protracted negotiations, Dortmund allowed Sancho to play in the group phase in India during the 2017 U17 World Cup.

The then 17-year-old scored three times as his side advanced to the knockout stage of the competition.

Sancho didn’t witness the knockout stage of the tournament due to him being called by Dortmund who needed the services of their star man. This shows how important and loyal he is to the club that made him famous.

FACT CHECK: Thanks for reading our Jadon Sancho Childhood Story plus Untold Biography Facts. At LifeBogger, we strive for accuracy and fairness.