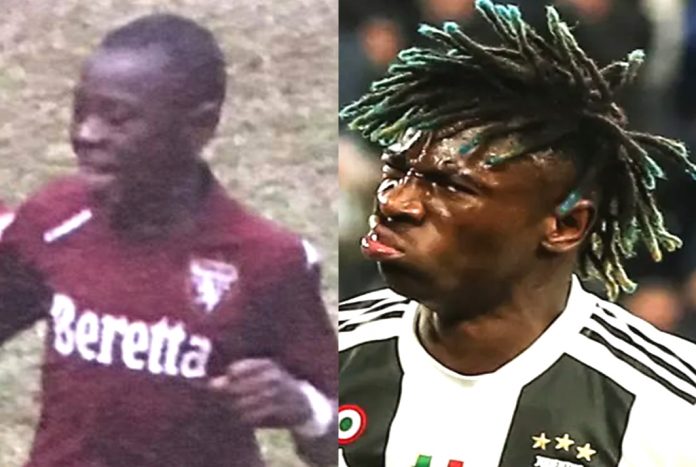 LifeBogger presents the Full Story of a Football Genius known by the name; “Kean”.

Our version of Moise Kean’s Biography Fact, including his Childhood Story, brings you a full account of notable events from his boyhood days to the moment he achieved fame.

Yes, everyone knows he is regarded as one of Italian football’s most promising prospects.

However, not many fans have read a detailed version of Moise Kean’s Biography, which is quite interesting. Now without further ado, let’s begin.

For Biography starters, his full name is Moise Bioty Kean. Moise Kean as he is popularly known as was born on the 28th day of February 2000 to his mother, Isabelle Dehe and father Biorou Jean Kean in Vercelli, Italy.

Moise Kean’s nationality is Italian. However, when you look at his parents, you could see traces of his African origin. Upon further research, we found that both of Moise Kean’s parents are Ivoirians.

As Joe.co.UK puts it, Moise Kean’s birth was deemed a miracle. According to his mother,

“The doctors told me I would not have other children, I cried and prayed upon hearing that.

This was because Giovanni [Moise’s older brother] was lonely and asked me for a little brother.

Then one night, I dreamed of my unborn child Moise and behold after four months, I was pregnant again.”

Upon his birth, Isabelle named her son Moise, a name synonymous with the biblical “Moses”. This was an attestation of the family’s Catholic-Christian religious background.

Moise Kean, who was born in the new millennium, grew up in a lower-middle-class family alongside his brother Giovanni who is seven years older.

Both of his parents were migrants who left Ivory Coast for Italy to better their lives.

Moise Kean, during his early years, witnessed a dwindling relationship between his parents.

Things began to fall apart, and it got so sour that Moise’s father boldly walked out on his family. Poor Moise Kean and his mother had to survive by themselves, having hardly any money.

Any child who has lived through a parental break-up will know only too well the deep emotional pain and the damaging psychological consequences it can have.

Moise Kean is one among many footballers (namely Dominic Solanke, Memphis Depay etc) who had experienced seeing their parents break up in their early years.

The effects of his parent’s separation clearly had an impact on his life and the developments he endures to this day.

Both Moise and his brother Giovanni were raised by their mother who worked as a maid after her husband’s escape.

She raised her sons to be very religious. Both Moise and Giovanni were kids who always respected the rules at home.

Kean, at an early age, got interested in football and aspired to be a professional. He supported Inter as a kid all because of the former Nigerian striker Obafemi Martins.

Moise Kean was so in love with the Nigerian that he would constantly pester his mum to have his Inter-Milan shirt.

Moise’s resilience and love for soccer paid its full dividend when he got spotted by Renato Biasi, a former Italian footballer.

Renato observed his skillset and offered to help him receive the most affordable soccer education.

Moise Kean’s passion for soccer saw him passing trials and enrolling at his town’s local club, Asti Calcio Football Club, which is the leading Italian association football club in the Italian city of Asti.

While at Asti, Renato Biasi kept pressing buttons to assist Moise Kean to a much bigger club.

An opportunity came for trials with Torino, and Moise Kean passed and got himself inducted into the club at the age of 7. He played in Torino until the age of 10.

After getting promoted through Torino age groups, Moise felt ambitious on the need to progress further in his young career.

In 2010, instead of renewing his contract with Torino, Moise Kean decided to leave the club based on a decision by his helper. He got signed by Torino’s cross-city rivals Juventus.

Again, it was Renato Biasi who arranged this transfer due to his love for Juventus and because he was a Bianconeri fan.

This is the most important day in his life that finally came to pass. The day Moise placed a call to his mum to announce his professional career call-up. According to Isabelle Dehe;

“We had little monies. Then one day Moise called me on my way to work at 5.30 am and said…

‘Mom, I have got a surprise!…’ I told him ‘No, don’t tell me you didn’t sign a professional career with Juve’.

He replied ‘I did and starting today you will quit your job and live with me in Turin.” 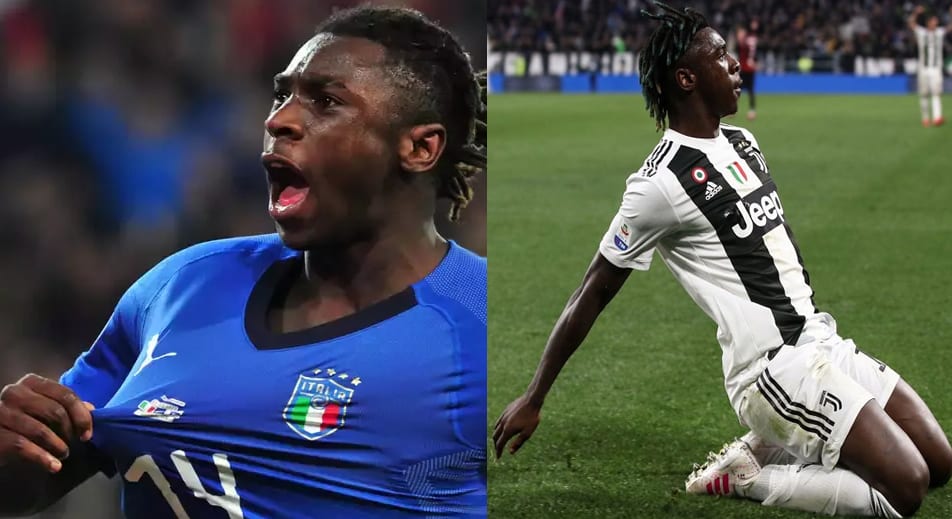 Moise Kean became the first player born in the 2000s to do the following;

While at Everton, Moise Kean got the honour of being among the club’s teenage goal-scorers. Notable names in this list include the likes of Ademola Lookman, Wayne Rooney, Gerard Deulofeu, Ross Barkley, Tom Davies, Jarrad Branthwaite, etc.

Who is Moise Kean’s Girlfriend?

With his rise to fame, the question on everyone’s lips is; Who is Moise Kean’s Girlfriend? or Wife / WAG?.

The romance of Moise Kean is one that escapes the scrutiny of the public eye simply because his love life is private and possibly drama-free.

According to an online report, Moise Kean met his girlfriend in a Milan Club and it was immediate love at first sight.

Another romantic meeting between the two love birds took place in a well-known restaurant in Milan where Kean, in the company of his inseparable big brother Giovanni and Nif spent some pleasant hours getting to know themselves better.

It took no time before he posted it on his Instagram account, which sparked gossip among fans.

Did you know?… Moise Kean’s beautiful girlfriend Nif is known to have a passion for martial arts and boxing, and she was once a champion of Muay Thai (a combat sport of Thailand that uses stand-up striking along with various clinching techniques.

Getting to know Moise Kean’s personal life would help you get a complete picture of him. Starting off, he is very friendly, and selfless and often finds themselves in the company of very different people.

Moise Kean is someone who believes all human colours are the same. His life is filled with empathy and expressed emotional capacity.

To Moise Kean, having colour differences isn’t something that divides us, but the inability to recognize, accept and celebrate those differences.

Moise Kean is also a sports testimony in the Italian Municipality of Asti. He is part of projects supported by the city’s Department of Sport. One of such project is aimed at promoting the inclusion of little boys in soccer.

At the time of writing, Moise Kean has accepted his dad into his life. Both parents have reaped the benefits of having a rich soccer son.

Moise’s devotion to making sure his parents are comfortable and content is similar to his commitment to soccer.

However, this commitment has recently brought some challenges due to his dad’s persistent request for tractors.

Moise Kean has once distanced himself from comments made by his father that Juventus still owe him two tractors.

“Tractors? I don’t know what you’re talking about…” said Moise Kean via his Instagram. Kean’s father Biorou once told Tuttosport;

“I am very happy for him, even if I have a problem with the club Juventus. While they negotiated with my son, the club also promised me some tractors for my agricultural business in the Ivory Coast.

I promised Juve that I’d keep him in Italy, but wanted two tractors in return. The club said it wouldn’t be a problem, but now I haven’t received them yet. They won’t give me tickets or even take my calls.”

According to an online source, Juventus risk losing Moise Kean on a free if the club does not deliver on the fleet of tractors they are said to owe his father.

He has accused Juventus of not giving him tickets to watch matches since after his tractor allegation.

Presently as at the time of writing, Moise Kean’s dad still holds the status of a migrant while his famous son holds an Italian passport which he acquired at the age of 18.

Moise’s mother as at the time of writing still appears separated from her husband.

Despite remaining grateful to Juventus for helping their son, Isabelle is someone who possesses a soft spot for English football and wishes her son would one day play for a big club in England.

Moise brother, Giovanni is also a footballer who spent most of his career time playing in Serie D before going professional with Serie C.

As at the time of writing, he was recently released from his Rieti contract by mutual consent on 29 January 2019.

Giovanni is credited for sacrificing his soccer career to move in with his little brother during his road to fame years. Both brothers pictured below went through hard times and finally got over it.

The reaction of Giovanni Kean (Moise’s brother) when his 16-year old little brother made his debut for Juventus is so emotional and priceless. Watch the video below;

As of the time of writing, Moise Kean has a market value of £15.00m (Transfer Market Report).

He isn’t the type of footballer who lives the Lavish Lifestyle all alone by himself. He is easily noticeable by a handful of friends and pretty impressing cars. 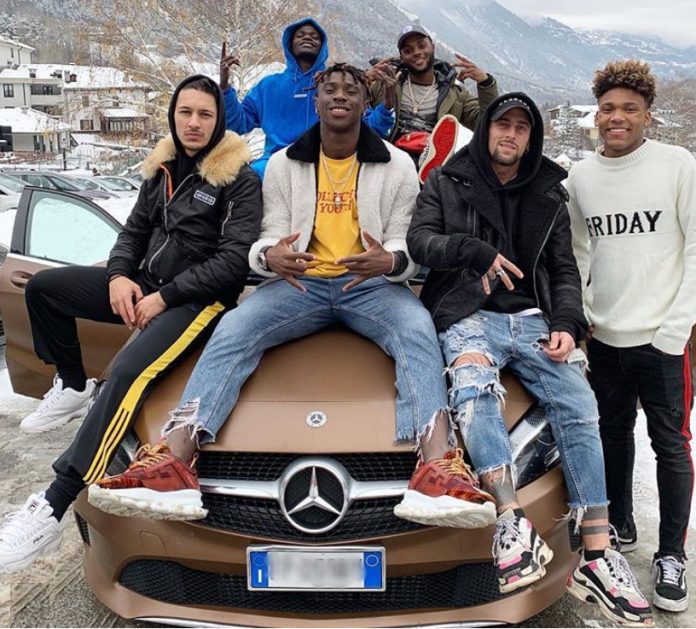 From all indications, it seems he is smart about managing his career despite living big.

Giovanni Kean once made a statement about his brother Moise saying; “Balotelli is his idol, but I assure you that on the pitch, they are different: Moise sacrifices.” This happened when Moise was spotted depicting Mario Balotelli’s “Why always me” shirt gesture. 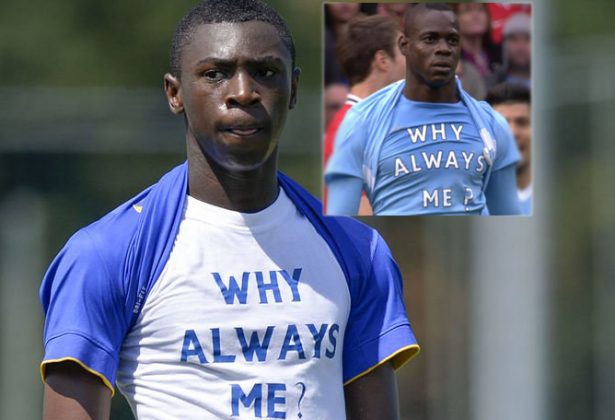 Despite Giovanni’s assertion, Moise Kean’s family believes the comparison of their famous son with Balotelli does not in any way hold up.

A Victim of Racism:

Most football fans first heard of Moise Kean due to the racial abuse he faced as a 19-year-old. He was once in the news after being a victim of racist abuse by Cagliari fans.

It was a situation that prompted questionable responses from his teammate Leonardo Bonucci who said the blame is 50-50. 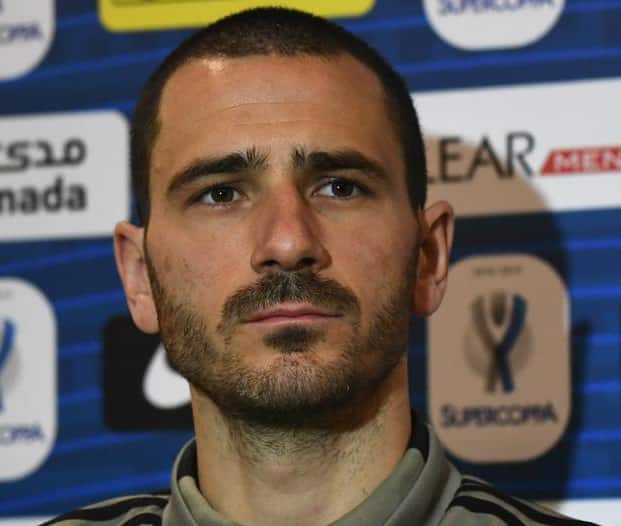 Raheem Sterling says Bonucci’s racist comments were laughable, while Mario Balotelli said to Leonardo Bonucci “lucky I wasn’t there“. Watch the video story of the incident below. Credit to Oh My Goal.

Please find below, our YouTube video summary for this profile. Kindly Visit our Youtube Channel for More Videos.

FACT CHECK: Thanks for reading our Moise Kean Childhood Story plus Untold Biography Facts. At LifeBogger, we strive for accuracy and fairness.