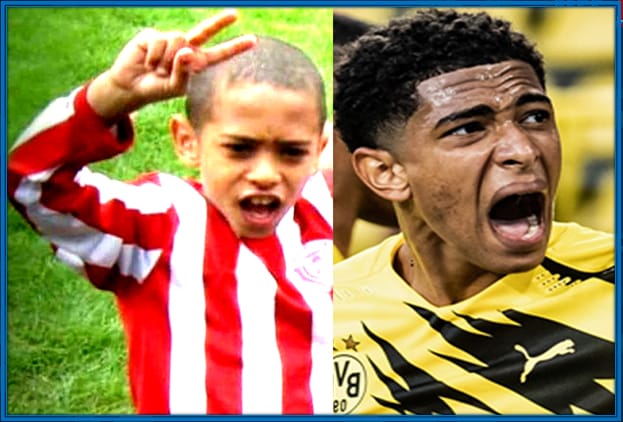 Our Biography of Jude Bellingham tells you Facts about his Childhood Story, Early Life, Parents, Family, Girlfriend/Wife to be, Net Worth, Lifestyle, and Personal Life.

In a nutshell, we present you with a complete Life Story of the English footballer, from his early days, to when he became famous. To whet your appetite, see the summary of Jude Bellingham’s Bio in photos. It does tell a story right?…

Without a doubt, the way Dortmund integrate young players is nearly incomparable. Again, you and I know Jude is that super kid from England who followed the footsteps of Jadon Sancho — making a name for himself in Germany.

Despite the accolade, we realize that not many have read his complete Life Story. It is filled with tales that are both fun and touching. Without further ado, let’s begin with the story of his early years.

For Biography Starters, he bears the nickname ‘Jude Ball‘. Jude Victor William Bellingham was born on the 29th day of June 2003 to his mother, Denise Bellingham and father, Mark Bellingham (a police officer) in the market town of Stourbridge, England.

The West Midlands native is the eldest of two children born of the union between his parents. In the photo below, I bet you can see the facial and skin tone reflection of Jude Bellingham’s mother in him. Without questions, Denise does possess the dominant gene in the family.

The English player spent his early years in the central part of England alongside his younger brother Jobe Bellingham. Back then, Jude was seen by many as a promising boy — an obedient kid who (early on) became aware of what he wanted in life.

As a boy, Mark his dad told him a story of his days as a non-league football player where he scored more than 700 goals. Also, how he failed to make it in the big leagues. In a bid to correct the latter, little Jude vowed to commit his entire life to football. This saw the start of his grassroots foundation days which we’ll explain in the latter part of his Bio. 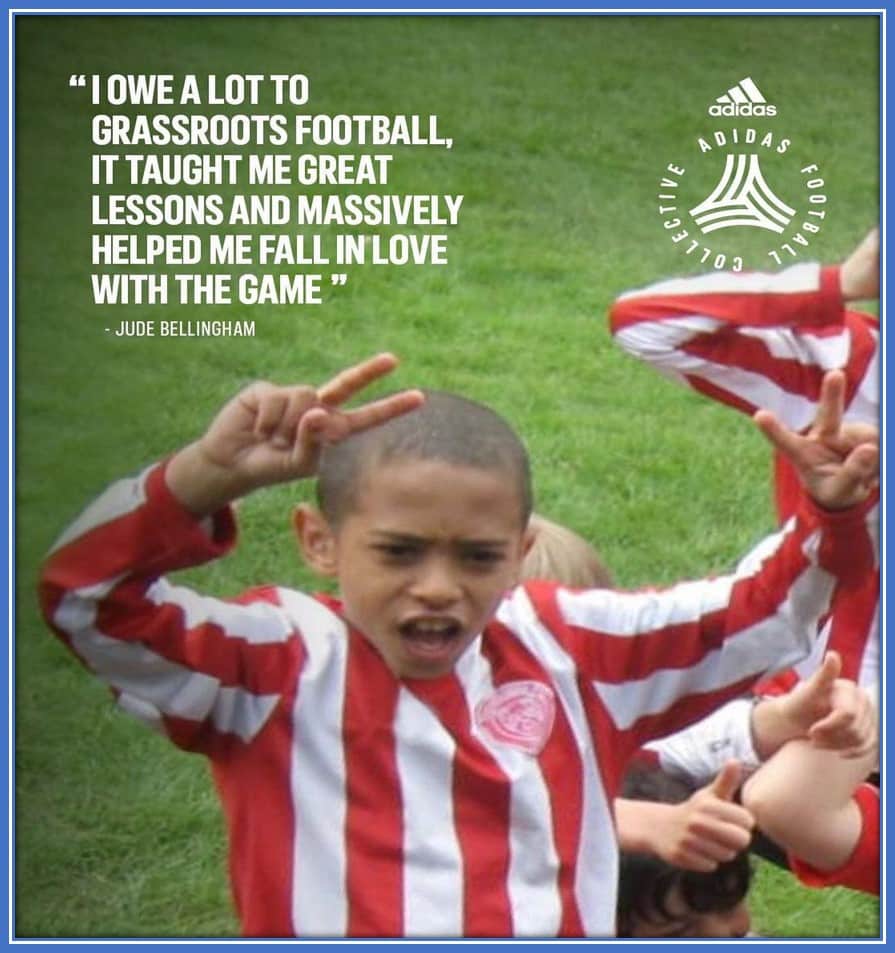 So far as we can tell, he comes from a household that is financially balanced. Jude Bellingham’s father (Mark) — who works as a police sergeant at West Midlands— earns twice as much as a full-time English employee.

Jude Bellingham’s mum (Denise), on the other hand, is also a working-class citizen of England. Hence, it is obvious that he grew up in a comfortable middle-class family background, one with no financial worries.

Judging by his birthplace, the young midfielder hails from the western region of England — very close to Wales. Again you must have noticed… a glance at his physical appearance does make you guess his maternal roots which go beyond the borders of Europe.

The truth is, Jude Bellingham’s family Origin comprises English and African roots. Research shows that the young lad owes his African Ethnicity through his mother’s ancestry. 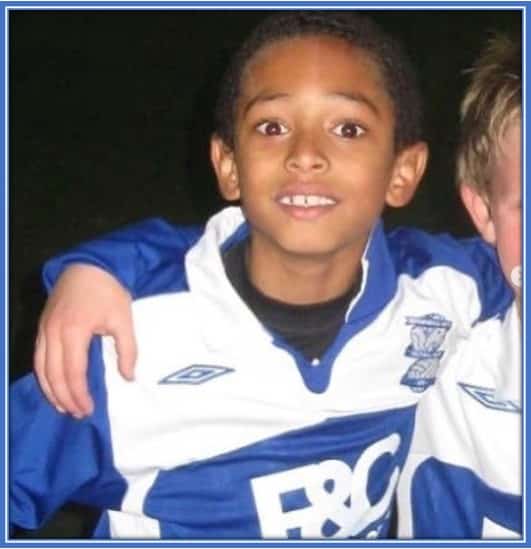 The football tales of Jude began when he was six. This was a time he began supporting Blues — a nickname for Birmingham City FC. Back then, Bellingham took a liking to the club which resembles his name. He had high hopes of joining the club’s academy thanks to his inherited passion and in the name of living the dreams of his family.

As mandatory, his parents ensured he did go to school. While studying at Priory School in Edgbaston, Bellingham’s dad had him join the under-8 team of Birmingham City. From his facial looks, you could tell how he feels. This was a feeling of passing academy trials — one of his greatest childhood moments. 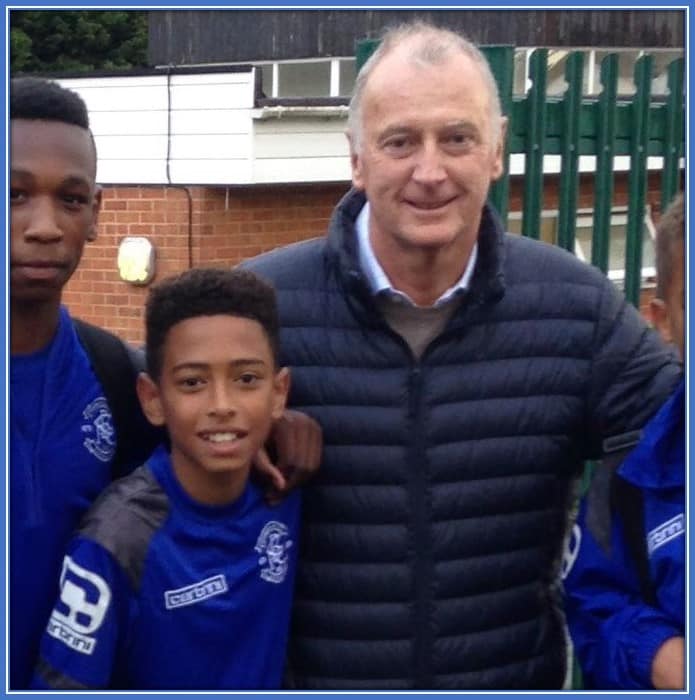 At the Blues, he displayed an unrivalled football prowess more than his peers. With the meteoric improvement, there was no end to what Jude couldn’t do. His capabilities won his coach trust and earned him the privilege of getting quick promotions to Birmingham’s U-18 and U-23 team at age 14 and 15, respectively.

Soon, the young English player became as fortunate as Demarai Gray and took up a two-year scholarship with Birmingham City in July 2019. The moment every youngster dreams of finally came. Jude Bellingham’s parents and family members were proud to have their very own signing a senior contract at 16 years and 38 days. 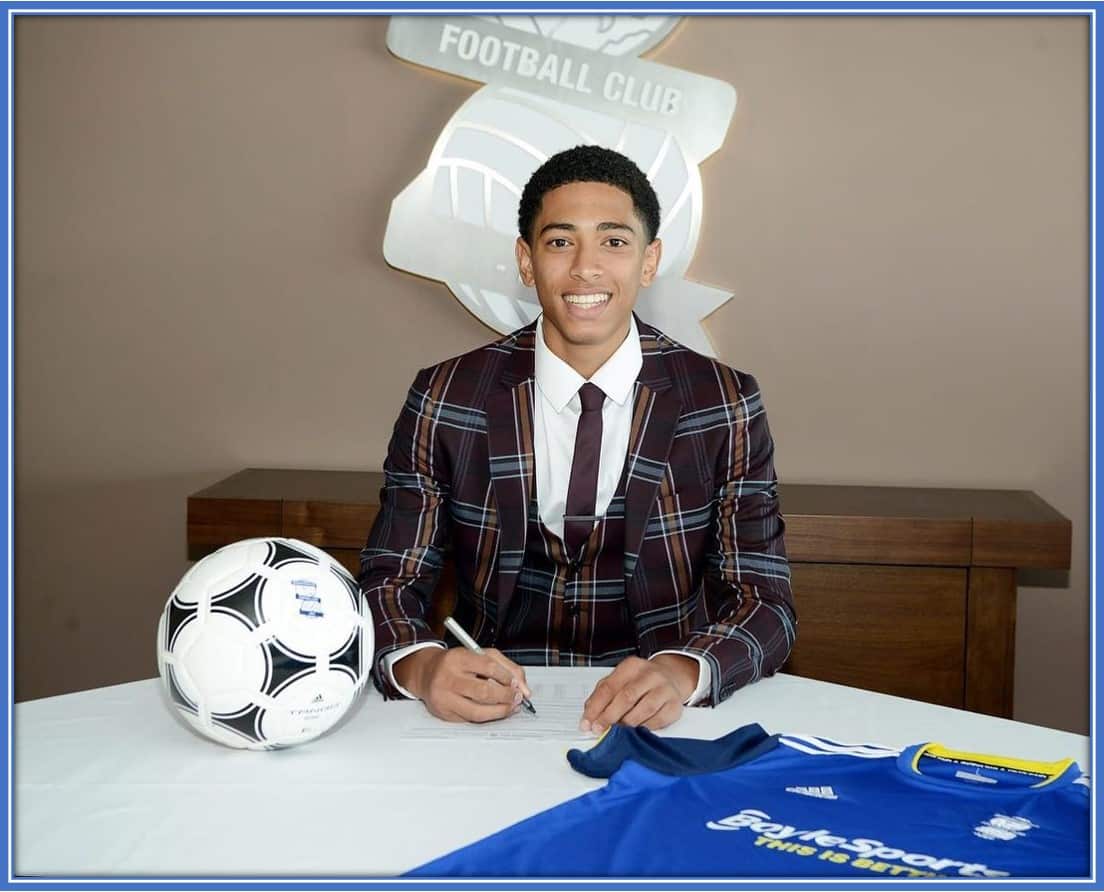 Moving on to a new chapter of life, the youngster began breaking records. First, Jude became Birmingham’s youngest ever goalscorer at the age of 16 years and 63 days. At this point in his life, many prestigious teams — especially Man United — came begging for his signature. 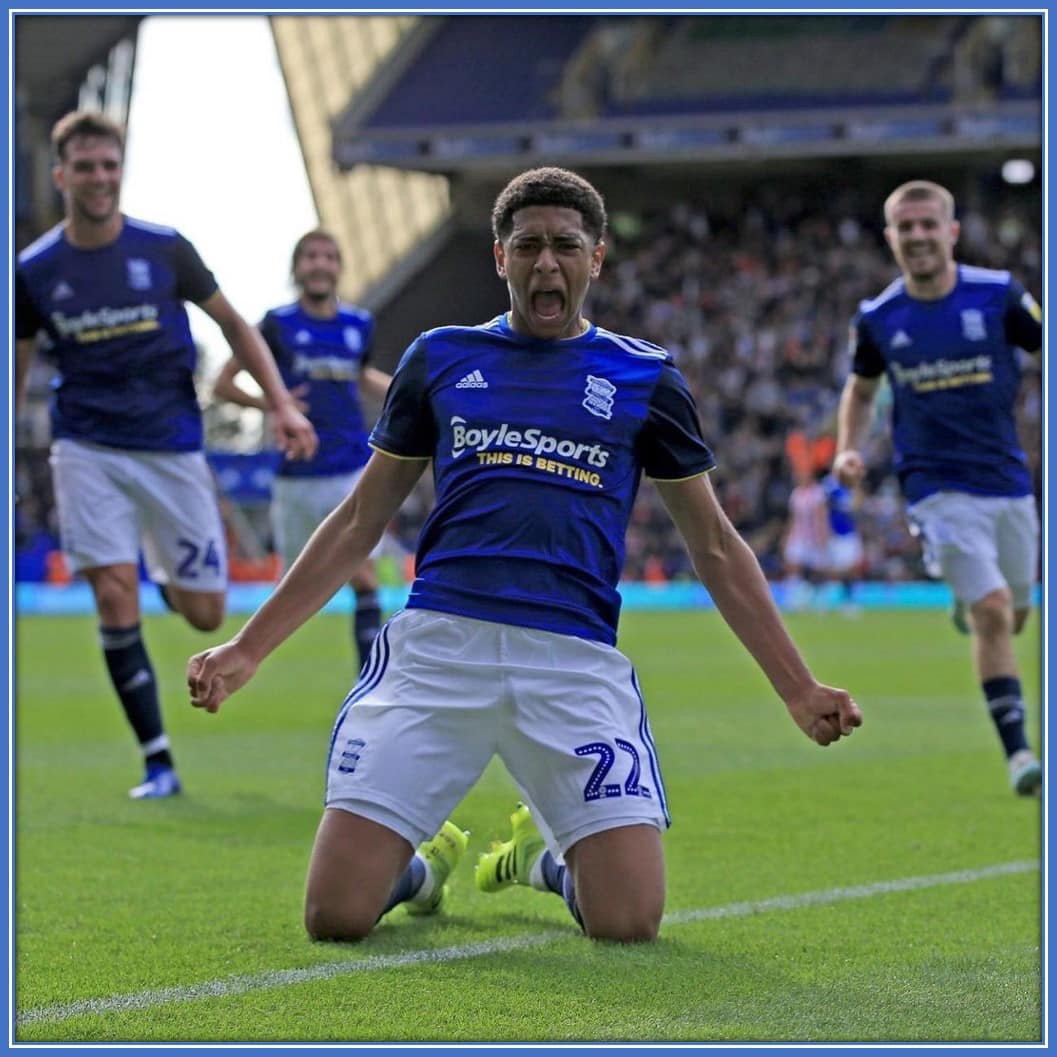 To get things right, Jude Bellingham’s parents deliberated greatly – if United was right for their son. After much review, they rejected the Red Devil’s transfer deal of £20 million. For clarity sake, Bellingham later revealed why he snubbed Manchester United.

Following in the footsteps of some English Football Players who have made it abroad, he began honouring contract offers outside England. Among all clubs, Dortmund edged out in signing Highly Rated English Teen. 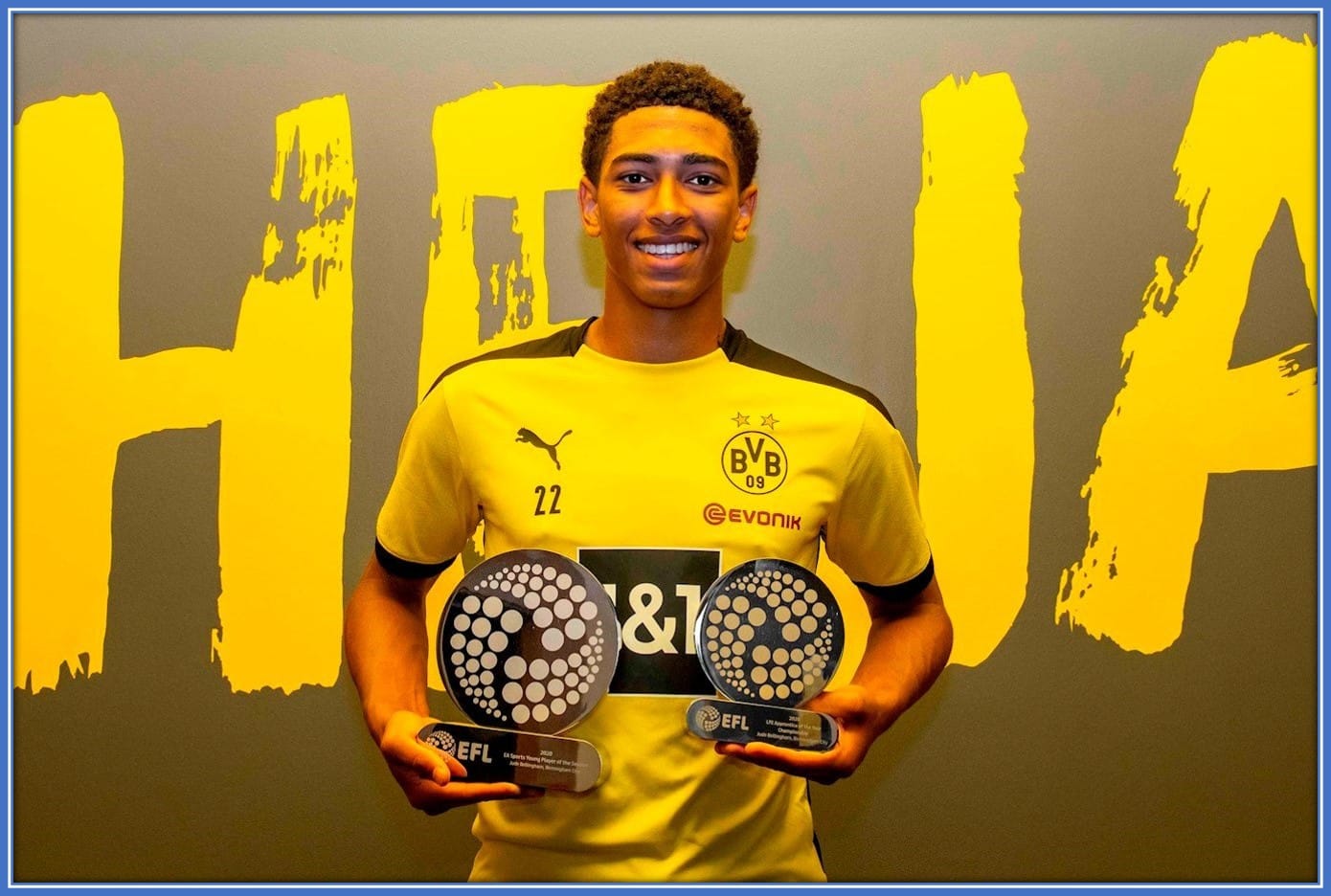 Responding to the clarion call of destiny, Bellingham joined Erling Haaland at Dortmund for a reported fee of £25 million. With the transfer, he became the most expensive 17-year-old in the history of Football.

Interestingly with Dortmund, he showed no sign of backing down and kept on rising and rising. Did you aware?… Jude Bellingham did become Borussia Dortmund’s youngest scorer with a debut goal. This feat saw him becoming one of the hottest teenage property in Europe. 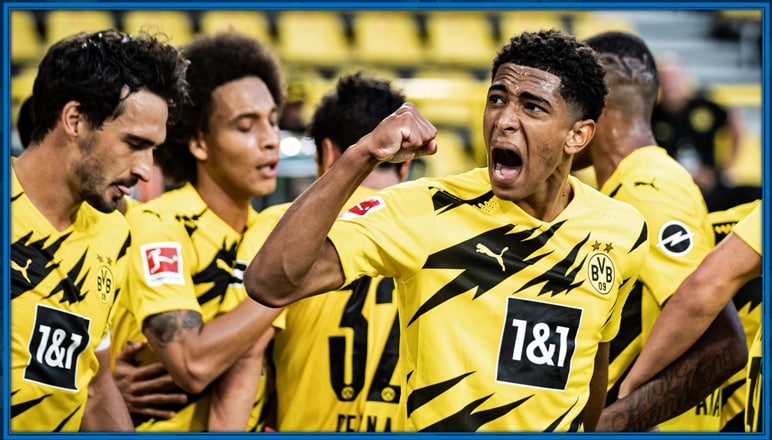 Not to forget, he broke a record held by Phil Foden as the youngest English player to start a Champions League match. Having seen his accomplishments at a very young age, Gareth Southgate wasted no time in inviting the youngster for his senior debut for England. The rest, as we say of his Video Highlight, is now history.

Who is Jude Bellingham Girlfriend / Wife to be?

Being relatively young and focused on his career success explains why he has given less attention to his love-life. No doubts, there are potential girlfriends and wife materials who are attracted to his darkly handsome looks. 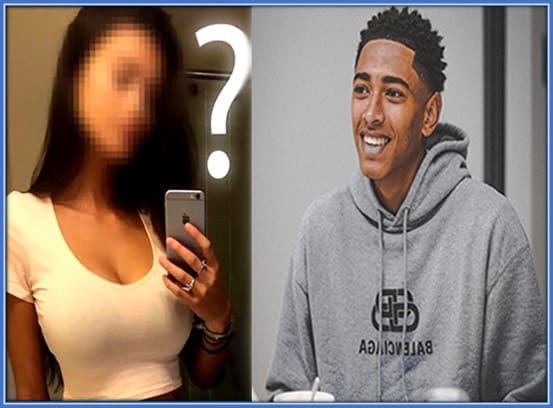 After much research, we’ve come to the conclusion that Jude Bellingham’s parents (at the time of writing) have not permitted him to have a girlfriend. More of this in his family life section.

Away from his job as a footballer, understanding his personality off the pitch would help you know him better. First and foremost, Jude is a cool, gentle and more of an introvert in nature. Secondly, he hardly eats out and dislikes cooking. Jude depends on his mum for all kitchen duties. 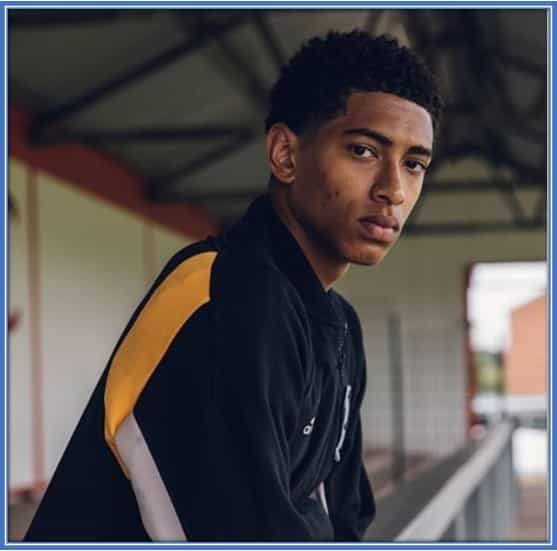 Behaving like an introvert does not restrict him from showcasing a great sense of humour especially to friends and family members. As a matter of fact, Bellingham occasionally makes his teammates laugh despite comedy not being his job. Ironically, he is a funny singer, as you can see in the video below.

Lifestyle and Net worth:

Until his move to Dortmund, Jude Bellingham’s parents ensured their son lives in the house with his immediate family. However, after joining the German side, he did acquire his own house and an exotic car.

While analysing his income, we found out that Bellingham earns a weekly Salary of around €57,000 with Dortmund. Did you know?… his earning at Birmingham City was peanut — a mere £145. Thankfully, BVB’s contract has positively affected his salary and has dramatically increased his net worth which is now between 2 to 3 million pounds (2020 stats). 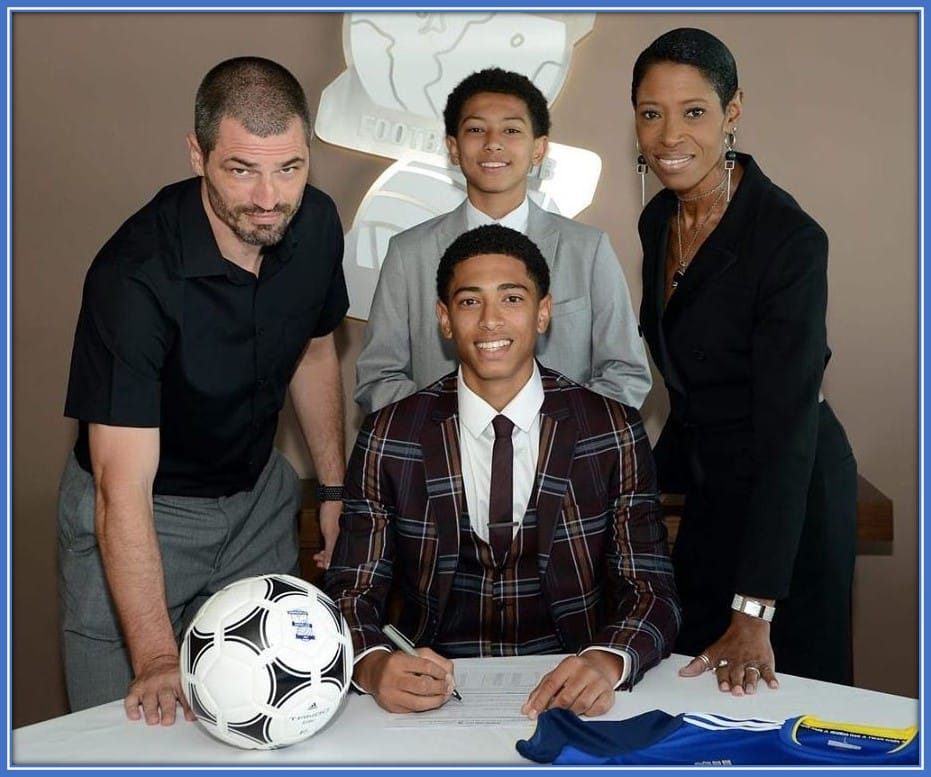 For the youngster, the road to stardom would never be smooth without the help of his close-knit household. In this section, we present you more truths about Jude Bellingham’s family starting with his Dad.

Have you ever wondered where he got his touch of football? Well, here is the truth; Bellingham’s talent was clearly inherited from his dad, Mark Bellingham. Before joining the Police force and even after getting into the job, Mark played football to keep his family doing even up to his forties. 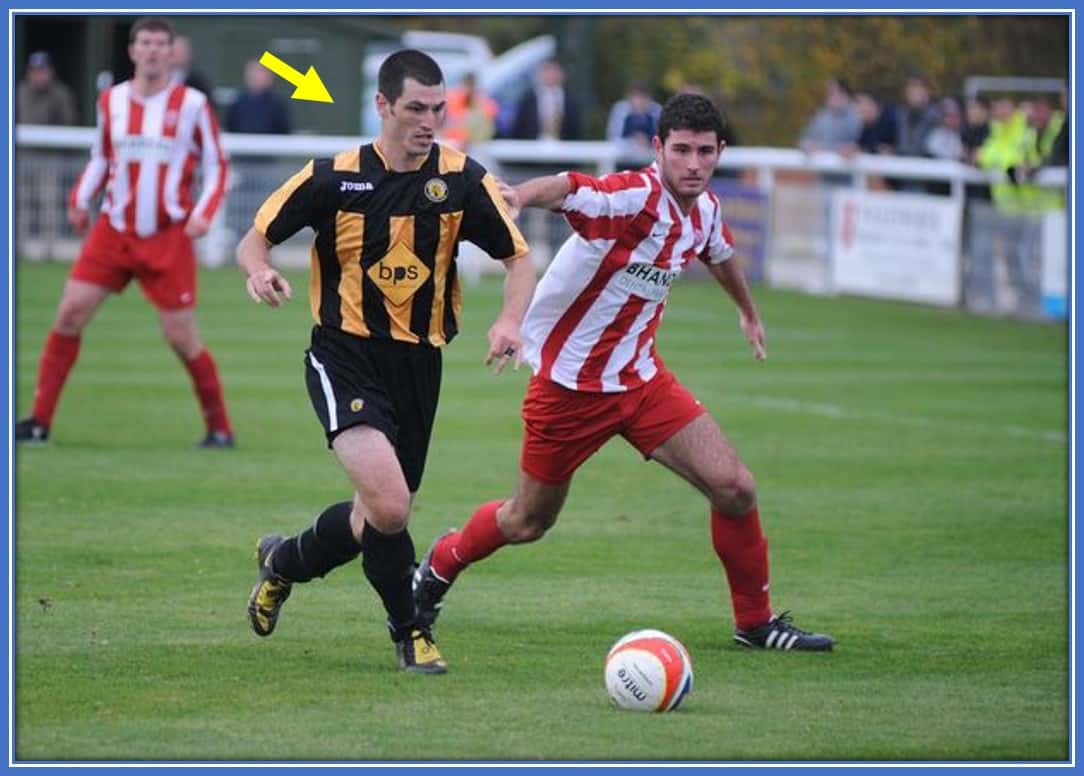 Back then, Mark’s unique goal-scoring ability did send many non-league defenders trembling at the sight of his presence. Throughout his non-league career, Bellingham’s father scored over 700 goals. Sadly, he never made it away from Non-League as Jamie Vardy did.

Because Jude is still a novice in the kitchen, Denice his mum agreed to leave England to share an apartment with her son in Dortmund. While Mark ensures his son gets a better deal, she does the homecare by ensuring Jude lacks nothing at home.

Those days, Denice did take good care of Jude and Jobe when her husband gets busy with law enforcement in the Midlands. Behold the look-alike mother and son. 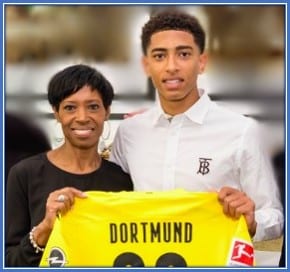 The England footballer shares a very close bond with his younger brother, Jobe. The two siblings grew up under the guardian of their parents and both joined Birmingham City FC’s academy. Bellingham’s brother still plays football and looks up to his big bro as a role model. 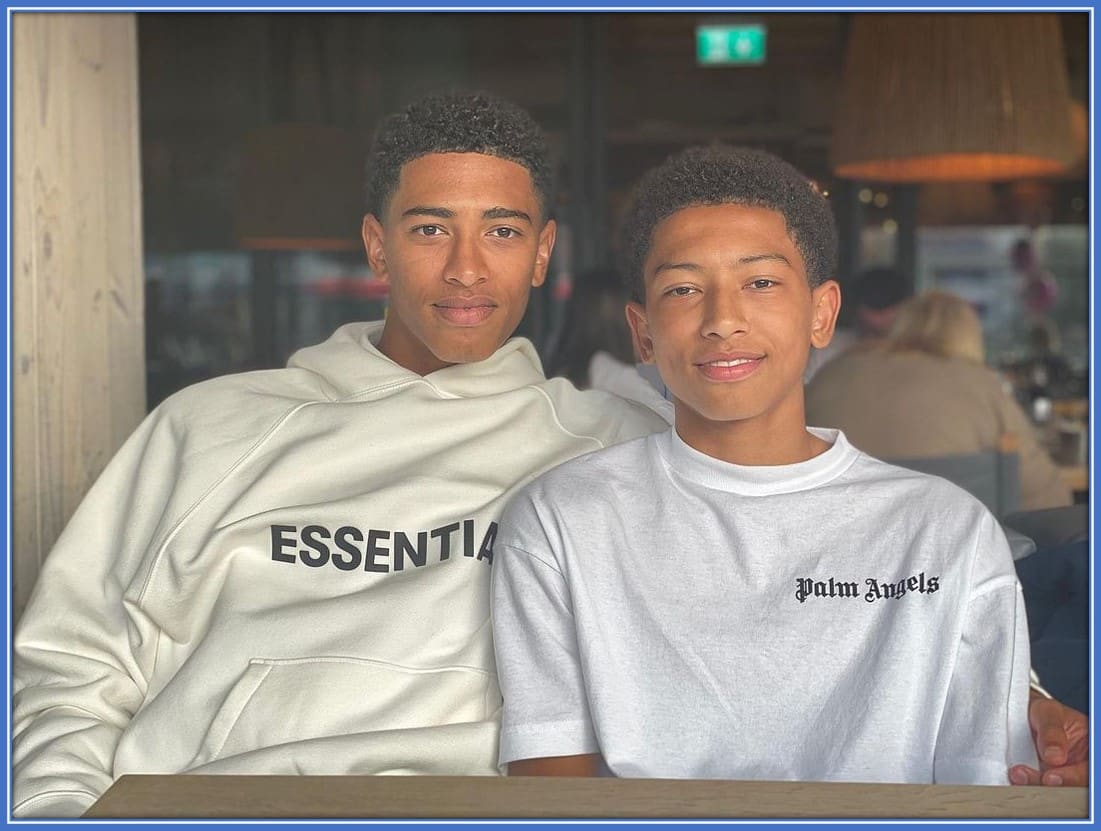 Perhaps, if the young winger had a sister, she too may have joined her siblings in their football expedition. Notwithstanding, we hope young Jobe’s career exceeds that of his Dad (Mark).

To speak of his British-Black ethnicity particularly his grandparents is akin to sailing uncharted waters. At this time, there’s been no information about his uncle, aunt, grannies etc.

To wrap up our Life Story on the Englishman, here are a few realities that would help you grasp the fully understand his Biography.

When he joined Birmingham City for his senior career, Jude was given the squad jersey number 22. Because he was that good, the club decided to retire his jersey number in the name of honouring him. That didn’t go down well with fans who got Birmingham FC roasted for retiring their jersey number 22 for a boy who just played 44 matches. 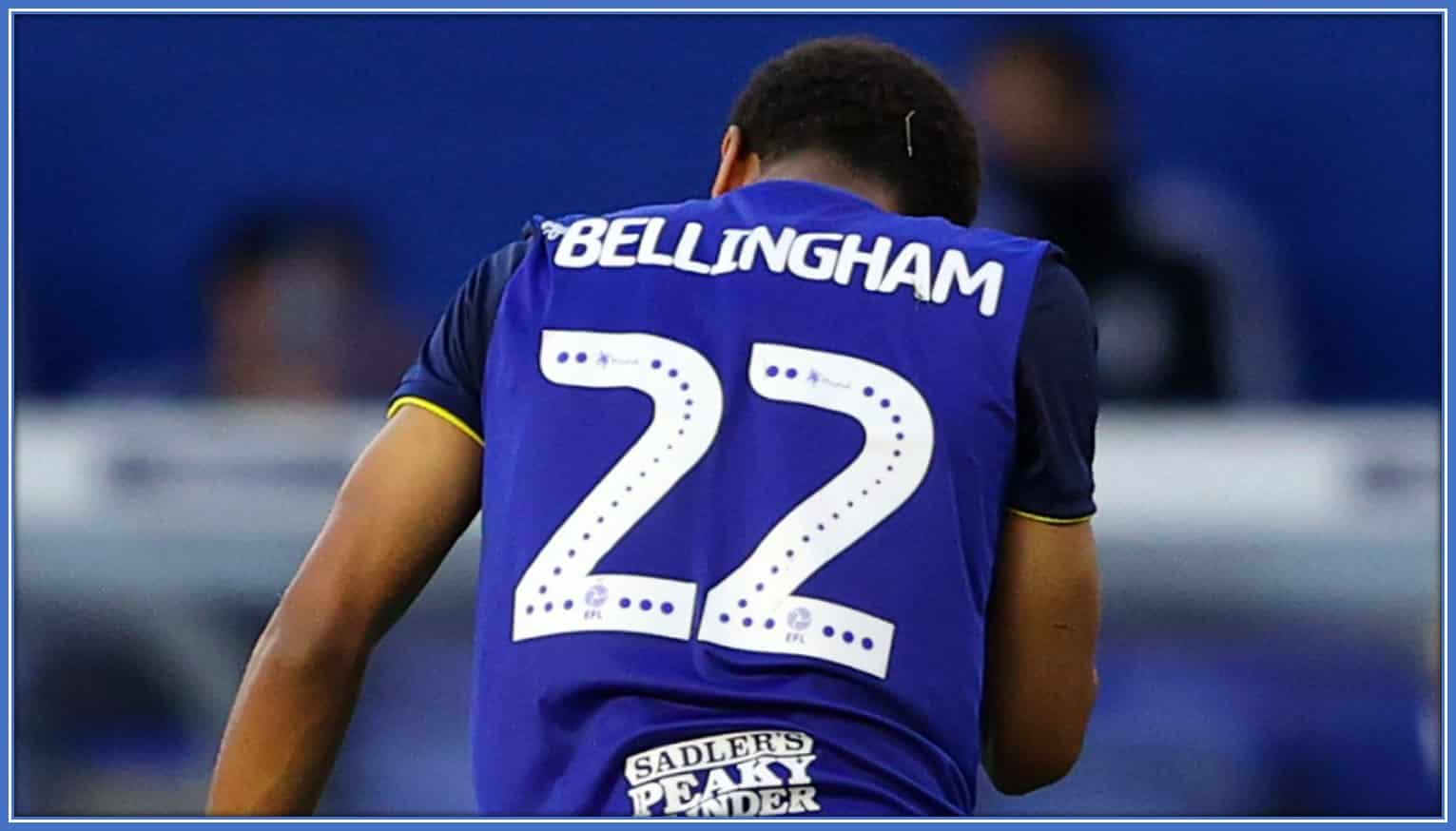 It is quite unbelievable how his wages took a leap from a few hundred pounds to about €58,000 per week. Research shows the average Englishman would have to work for one and a half year to make what Bellingham earns in a week.

We’ve strategically put up an analysis of his Bellingham’s earnings as the clock ticks. See for yourself how much he has made since you came here.

Since you started viewing Jude Bellingham’s Bio, this is what he has earned.

Did you know?… the north London club was the first club to have scouted the teenage prodigy. Arsenal came the closest to signing Jude Bellingham but missed out due to transition in their management.

Despite his young age, Bellingham has shown traits that have ranked him higher amongst his peers. From his profile, we could see that the promising player has got more potentials up his sleeves. Sadly, his current rating suffers — just 4 points below Sean Longstaff. 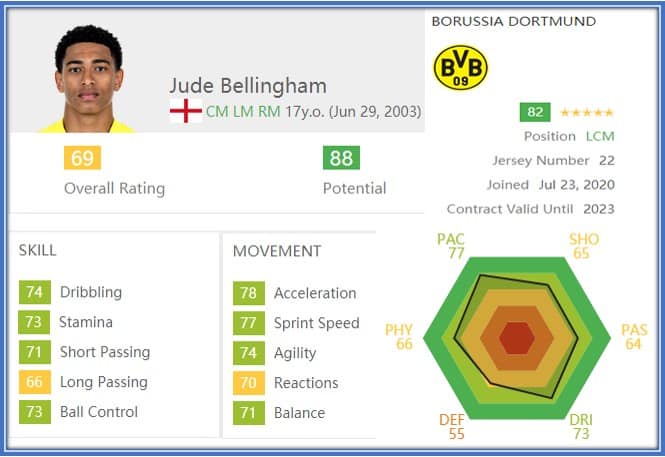 In conclusion, we can not deny the fact that Jude Bellingham knew what he wanted since childhood. Like Nick Pope, he has paid his dues playing from the lower leagues and then to the top tier.

Additionally, knowing that Borussia Dortmund was the best place for him wouldn’t have been possible if not for family values. Jude Bellingham’s parents (Mark and Denice) has been there at every crucial moment of his life. Thanks to them, he was able to make a profitable decision that has changed his life.

Thank you for reading the Biography of Jude Bellingham. Kindly contact us if you find anything wrong with this article. Otherwise, tell us your thoughts about the midfielder’s story in the comment section. Now to get a full grasp of Jude Bellingham’s Bio, use our Wiki table.