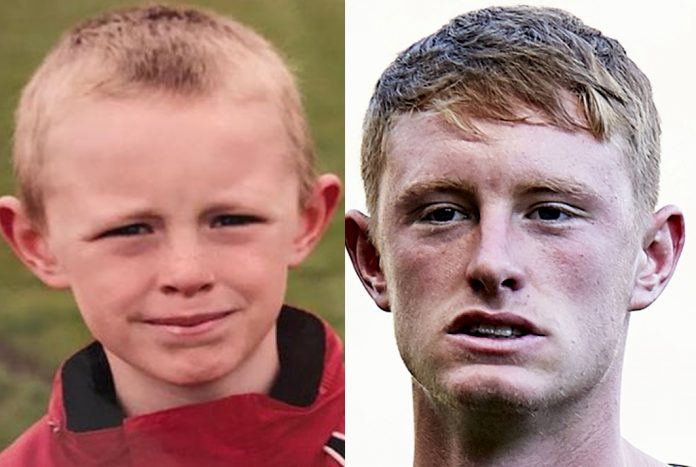 LB presents the Full Story of a Football Genius with the nickname “The New Michael Carrick“. Our Sean Longstaff Childhood Story Plus Untold Biography Facts brings you a full account of notable events from his childhood time to date.

Yes, everyone knows about his rise to prominence in Newcastle, a feat which has made Manchester United beg for his signature. However, only a few consider Sean Longstaff’s biography which is quite interesting. Now without further ado, let’s begin.

Starting off, his full names are; Sean David Longstaff. Sean Longstaff as he often called, was born on the 30th of October, 1997 to his father, David Longstaff and mother, Michelle Longstaff in the city of Newcastle upon Tyne, United Kingdom.

Sean grew up alongside his little brother Matthew in a sporting family home. Growing up, Sean observed his parents to be heavily involved in sports. Speaking of Sports, It wasn’t just for their love for Newcastle United BUT ice hockey, cricket and netball.

Due to his father’s commitment to both national and club duty, Sean Longstaff family’s stay in England was short-lived. At some point in his early life, Sweden became his second country. Sean’s father David played for one of the top sides in Stockholm, Sweden.

Sean Longstaff’s developed a dogged approach to sporting education early on as a child. This he took to the modern-day. Today’s doggedness is linked part down to his childhood experience where he spent most of his time playing hockey on the Swedish ice rink.

At this point (pictured above) in his early life, there was no sight of Sean Longstaff wanting to become a footballer. All he wanted was to follow in his dad’s footsteps in becoming a professional ice hockey star.

Despite Ice hockey and Netball being the major trade, the entire members of the Longstaff family still retained their love for Newcastle United, one which was very hard to let go. In fact, both his mum, dad, brother, sister, uncle and aunt were all lifelong and die-hard fans of The Magpies. At some point, Sean Longstaff’s dad took his family back to England.

Upon returning fully to England from Sweden, Sean Longstaff began receiving cricket education from Tynemouth Cricket Club. Early on, he helped his teammates in winning his first trophy.

While playing cricket, Sean Longstaff also attended John Spence Community High School. At the school, he fell in love with football and saw himself abandoning cricket. Back then, his teachers at the high School knew Sean Longstaff was destined for great things as they watched him hone his skills on their football fields. So when Longstaff bagged the call-up to attend trials in Newcastle United’s academy, their pride knew no bounds.

The humble, highly driven and confident Sean Longstaff at the age of 9 saw himself passing trails and getting enrolled into Newcastle academy where he was given the stage to showcase his talent. Early on with the club, Sean was probably of the same quality and stature just as everybody else at the under-9 level.

However, it took no time before he began building his character, turning into a prodigy in the process. At this time, Sean Longstaff became streets ahead of his mates in terms of manners and resilience, and technical ability. This feat saw him making serene progress across different age groups and projecting himself into senior football.

After ending his youth career with Newcastle, Sean Longstaff felt the time was right for him to make a bold decision. He decided to leave England on loan to Kilmarnock Football Club, commonly known as Killie. This is a Scottish football team based in the town of Kilmarnock, East Ayrshire.

At the club, Sean Longstaff spent a lot of time working on his defensive discipline and passing techniques which later became his biggest strength.

Being a very hardworking and an exceptionally considerate pupil paid off as Sean Longstaff got called upon for another loan spell with Blackpool. While playing for the seaside club, Longstaff began to show how powerful he was in his ability to get forward. Below is a piece of video evidence.

🚀 @seanlongstaff97's seventh goal of the season on Saturday was another one for his scrapbook. pic.twitter.com/K7EM48J6HU

Seeing these improvements began to tempt Newcastle about thinking on a possible return of their very own son from his loan spell.

After hearing enough good news of their loanee shining in Blackpool, Newcastle United decided to recall their very own Sean from loan. This happened at a time Rafa Benitez was having a midfield crisis- injuries to Jonjo Shelvey and Mo Diame,

Sean Longstaff was given the opportunity and he immediately impressed. This meteoric rise to fame saw him becoming the most exciting talent to have come out of the club’s academy in recent years after Michael Carrick.

Sean Longstaff’s ability to make games look simple became known by fans. He unleashed a playing style which combines the elegance of a Rolls Royce with the engine of a Mustang, making Newcastle fans sing praises of him.

The biggest turning point of Sean Longstaff success came in the 2018/2019 season came when he won the penalty that gave Newcastle a 2–1 win over Manchester City in January 2019. Since that day, his name has been in the transfer radar of top clubs, among whom is Manchester United. The rest, as they say, is now history.

The love life of English footballers is something that seems to fascinate many fans. Without a doubt, Sean Longstaff’s rise to fame has left fans wondering if the footballer’s success is tied to his girlfriend or wife (that is if he has one, as at the time of writing).

Oh yes! he might not be as handsome as David Beckham, but with that cute smile in his closets, there is no denying the fact that Sean Longstaff won’t be a darling vine to ladies.

As at the time of writing, a possibly hidden romances exist for him and his supposed girlfriend or wife to be. It is one which escapes the scrutiny of the public eye simply because his love life is private and possibly drama-free.

As at the time of writing, Sean Longstaff has preferred to focus on his career and has sought to avoid any spotlight on his private life. This fact makes it difficult for us to have facts about his love life and dating history.

Getting to know Sean Longstaff’s personal life away from the pitch of play would help you get a complete picture of him.

Starting off, he is a quiet, shy and happy guy. In reality, Sean Longstaff is someone who is able to withstand all sort of pressure without a mood swing. He can turn his hand to just anything you threw at him, whether its cricket, badminton, table tennis or football. All this is tied to his good-guy approach to life, his genetic makeup and sporting family roots.
Sean Longstaff is someone who gets fascinated by his balance, symmetry and he is a good conventional listener.

Sean Longstaff earns a healthy amount of salary from his professional career as a footballer. This, however, does NOT transcend into a glamorous lifestyle an example which is seen below.

As at the time of writing, Sean Longstaff is not allowed to live a lavish lifestyle eg spending like crazy, showcasing fleet of exotic cars, girls and the buzz. He doesn’t have much trouble managing his football monies and saving some for the rainy day.

Sean’s success boils down to his upbringing at both his family home and his education at John Spence Community High School in North Shields. Now let’s give you some info on about his family.

About Sean Longstaff’s Father: David Longstaff was born on the 26th of August 1974. Judging from his date of birth, David had Sean when he was around 23.

David Longstaff starting his career with his hometown club, Whitley Bay Warriors before moving to the Sheffield Steelers in 1995, a club he enjoyed several victories and success in a variety of league and play-off games.

As at the time of writing, David Longstaff is still active as player-coach for the Whitley Warriors.

About Sean Longstaff’s Brother: As at the time of writing, Sean Longstaff’s younger brother is part of the under-23s team at Newcastle. The fact that both boys have become successful in the club clearly means they both have skills, thanks to the values that have been instilled in them from an early age.

Did you Know?... As at the time of writing, some fans think that comparing Sean Longstaff with Declan Rice is like comparing the stats of Frank Lampard to Paul Scholes.

Back then, while Paul Scholes held more experience but Lampard had the stats. In this case, despite being a year younger, Rice is clearly the more experienced player but Longstaff does hold his own when it comes to football stats.

FACT CHECK: Thanks for reading our Sean Longstaff Childhood Story plus Untold Biography Facts. At LifeBogger, we strive for accuracy and fairness. If you find something that doesn’t look right, please share with us by commenting below. We’ll always value and respect your ideas.