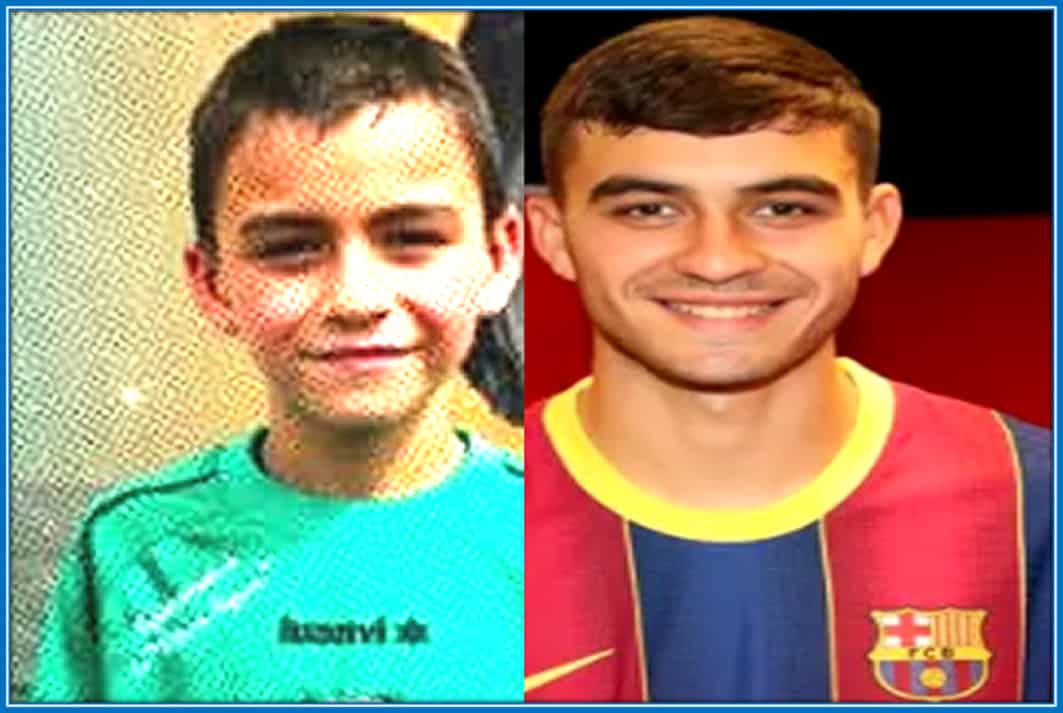 Our Biography of Pedri Gonzalez tells you Facts about his Childhood Story, Early Life, Family, Parents, Girlfriend/Wife to be, Lifestyle, Personal Life and Net Worth.

In clear terms, we present you his journey, from the early days, to when he became famous. To whet your autobiography appetite, here is his boyhood to fame gallery — a perfect summary of Pedri’s Bio.

Yes, you and I know Pedri is the chosen one, a player who does nothing than listening and learning from his Spiritual leader; Lionel Messi. Despite this accolade, we realize only a few fans have digested his life history. We’ve prepared it for you and without further ado, let’s begin.

For Biography starters, ‘Pedri’ is just a nickname, and his full names are Pedro Gonzalez Lopez. The footballer was born on the 25th day of November 2002 to Spanish parents in the small town of Tegueste, on the Island of Tenerife, Spain.

Pedri is one of two children born of the union between his father and mother who appear to be in their 50s. Judging by their faces, you’ll agree with me that the youngster looks exactly like his mum… right?

The Barcelona starlet spent his early years in the town of Tegueste alongside his brother, whom he enjoyed a great sibling relationship with. Back then, Pedri Gonzalez’s parents would honour the demands of their sons having similar Barca jerseys. Hence, the brothers grew up having an unfathomable interest in FC Barcelona.

The Tegueste native was born into a household that has a lifestyle centered on the love for FC Barcelona. Now here is an evidence of his family’s love for soccer. Did you know that Pedri’s grandfather is the founder of FC Barcelona’s supporter club in their hometown of Tegueste?

Being raised in a middle-class family background did not deny him the experience of rich sporting culture. Pedri’s household was so into football that the plates they use in eating daily meals had the inscription of FC Barca’s barge. This shows their deep connection with the Catalan club. 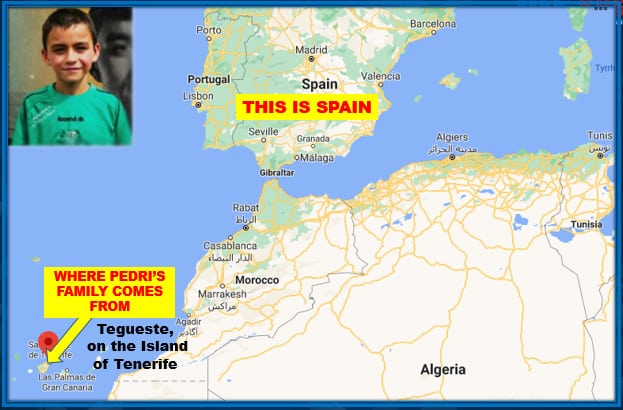 Interestingly, the Spaniard is not from Spain’s mainland but one of its’ Canary Islands, very close to Morocco and West Africa. Pedri Gonzalez’s family hails from the town — Tegueste which is a port city, on the island of Tenerife.

Judging from the geographic location of his roots, one or both of Pedro’s parents might have their origin traced to Africa, precisely Mauritania, Morocco or Algeria. More interestingly, the island of Tenerife is a hot-spot for Football scouts who have over the years fetched youngsters to Europe. A perfect example is Pedro Rodriguez. 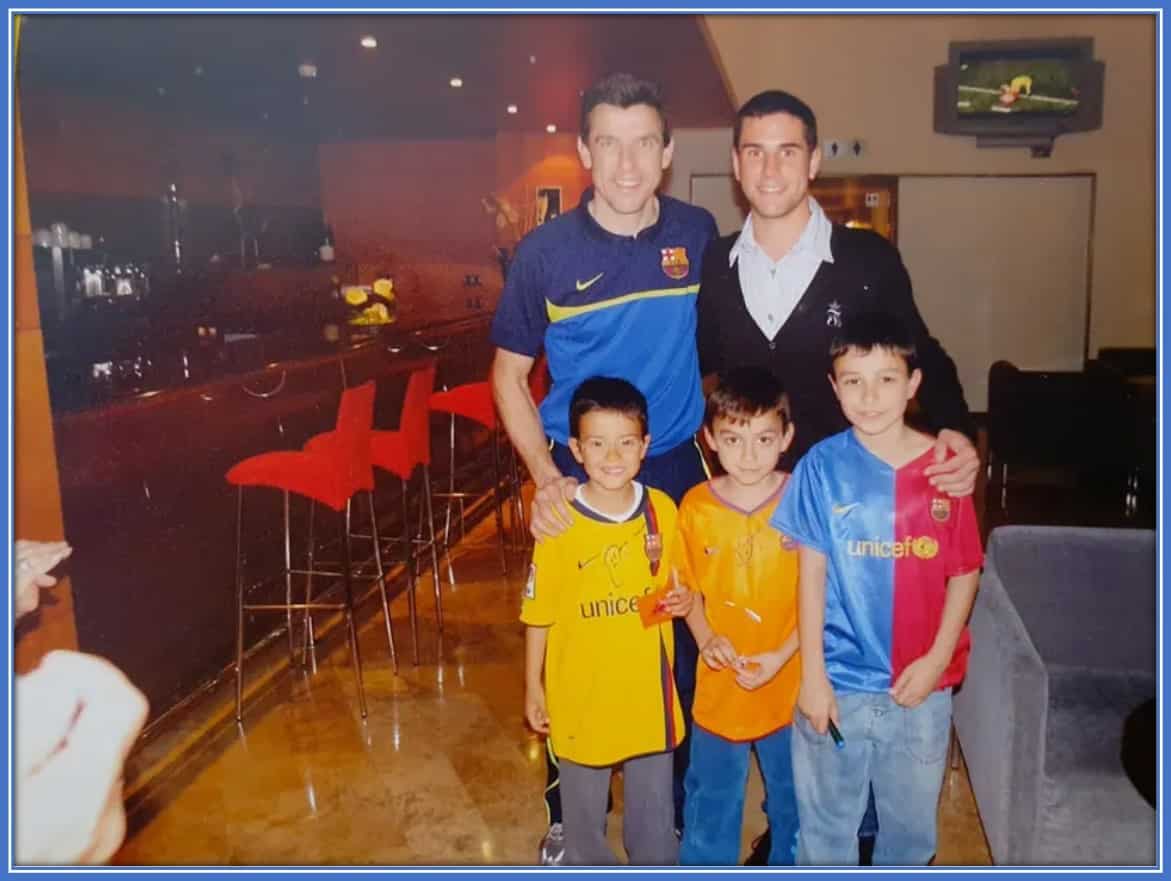 As he grew pass a toddler, the Tenerife native saw himself consuming so much sporting mentality. Back then, while bonding with his Dad on footballing talks, he got introduced to the videos of Michael Laudrup. Although as a child, Pedri admired Andres Iniesta.

“MY FIRST PREFERENCE IS ANDRÉS INIESTA. I LOVE HIS FOOTBALL AND HOW SMART HE IS ON THE PITCH. INIESTA MAKES FOOTBALL NOT JUST A GAME, BUT AN ART.”

Like every other kid, Pedri often hits the streets of Tegueste to play football with high hopes of becoming pro. By the time he clocked nine, the youngster had already surpassed his peers in both tactics and playing style. At that time, Pedri’s family could tell he was just a few miles from gaining entry into an academy. Thankfully, he did after a successful trial with Tegueste.

While working hard in the local leagues, Pedri became frustrated at not getting opportunities to move to bigger academies. In fact, everything seemed to be falling apart, and his fear of not becoming a professional became worse.

At that moment, nothing could console the young lad as he was left at the mercy of luck. His father could only hope for a destiny helper while his mother sought for the best strategy to help him overcome such unfortunate circumstance.

Above all, it was his endurance and patience that kept him loyal to football. By the time he clocked thirteen, a successful trial saw him joining Juventud Laguna’s youth team — a bigger academy in his homeland.

While there, he honed his skills and there were scouts who still kept monitoring his progress. Thanks to his astonishing improvement, he joined UD Las Palmas’s youth team, an academy in the autonomous community of Canary Islands.

After a few months of playing in Palmas’s youth setup, the first team manager, Pepe Mel, saw the need to have him in his first team which he joined in July 2019.

On the first month of his debut, the attacking midfielder broke the record of becoming Las Palmas’ youngest goalscorer at 16 years, 9 months and 23 days of age. With more scouts coming his way, Pedri Gonzalez’s parents began preparing their minds for their son’s departure to Spain’s mainland.

After a struggle over who gets his signature, Barcelona snatched him with a five-year contract worth €5 million and a release clause of €402 million. Judging from his performance, fans have asked… could Pedri be the saviour Barcelona has been looking for?

Well, judge for yourself after watching his video highlights. The rest, as we always say, will be history.

Who is Pedri Gonzalez Girlfriend/Wife to be?

With his rise to fame, it will be certain that some female fans would want to get close to his heart. In other words, there is likely to be an impressive lineup for potential girlfriend or those who tag themselves wife material.

Just like Ansu Fati, Pedri does receive advice from his parents on the need to pay more attention to his career endeavours rather than getting a WAG. 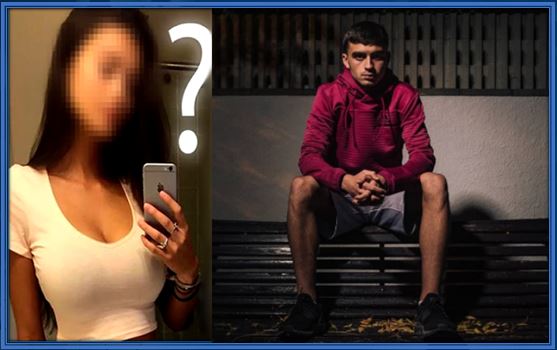 As I write his Biography, we only Pedro for his gameplay rather than a flaunter of girlfriend(s). If he must establish himself like Xavi Hernandez, the Spaniard must follow the advice of his managers.

Once footballers reach a certain level of success, you expect them to change. With so much money and attention, it can be easy for them to fall into the traps of arrogance and obnoxiousness. First and foremost, Pedri is one of those footballers who lives a refreshingly humble life.

Also on his personality, he is not much of a superb cook as compared to his brother, who prepares the dishes for the family. Aside from food, Pedri has got a great interest in playing games. Feed your eyes with his personal life by watching the video clip below.

Although, he is not as boisterous as Sergio Ramos. However, he’s got a trait of blending with other football folks. As I write, his closest friend at Barca is Francisco Trincao.

Young Pedri who just turned 18, at the time of putting up this Bio, does not even have a driver’s license. This is because he hasn’t clocked the legal age of obtaining it. However, the Tegueste native, in a bid to transport, leaves the Camp Nou in a taxi. 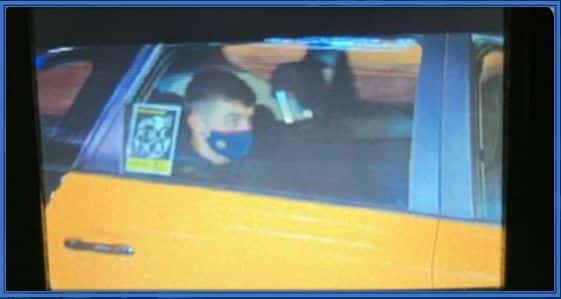 Once upon a time, the football commuinty got a clear evidence of his humble lifestyle. After he helped Barcelona to a win, a viral video appeared which revealed his humility. Before the match, Pedri arrived Camp Nou with his clothes in a nylon bag after being dropped by a taxi. 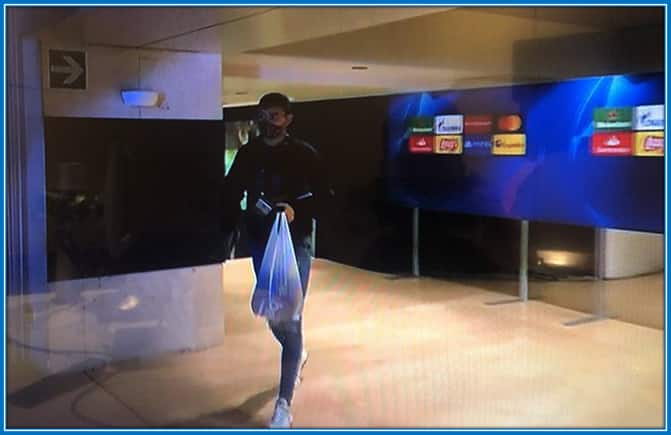 Despite his low-key Lifestyle, the talented boy has amassed a mouth-watering sum of money from his contract with Barca. While putting up his Life story, Pedri’s salary of approximately €800,000 has placed his Net worth to be roughly €1.1 million.

Throughout his difficulties, there have always been some persons who stood firmly by his side, not for gain but for sheer love. Family presence alone makes his existence a complete episode of happiness. In this section, we shall unveil complete information about them starting with his dad. 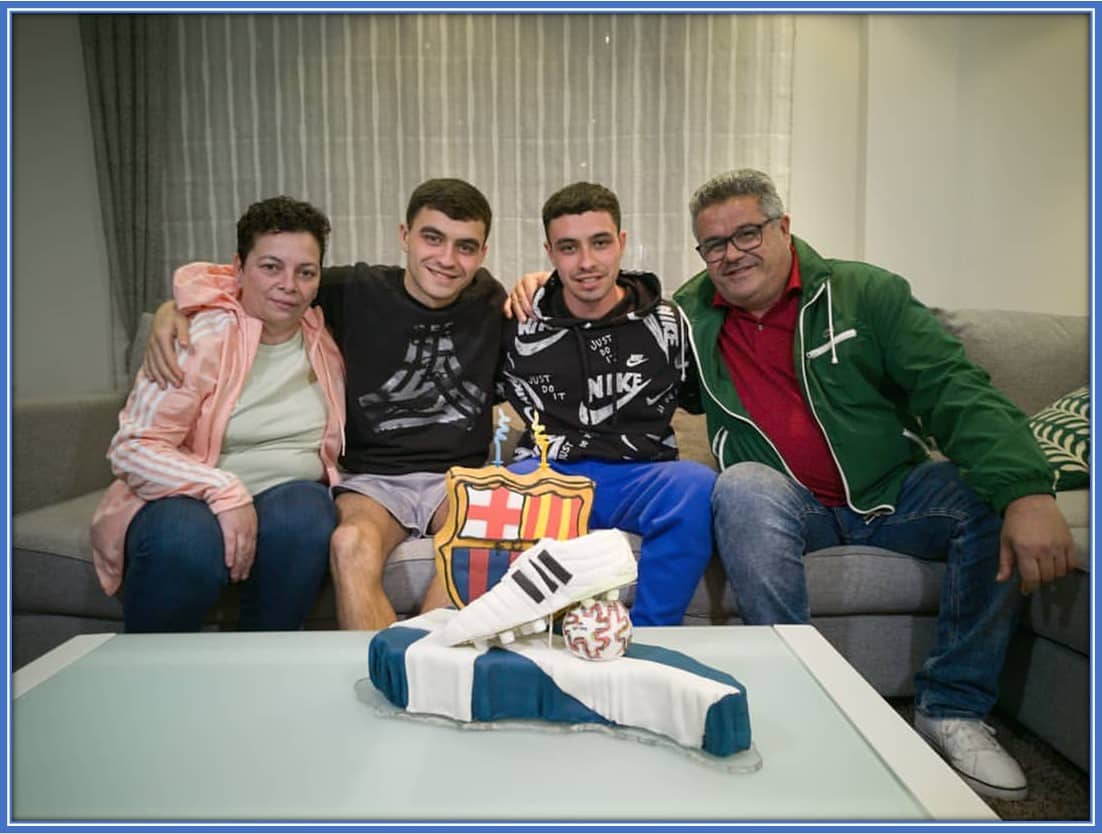 Have you ever wondered who the man behind his unwavering guts to never give up is? Then, we are glad to apprise you that Pedri’s dad is responsible for his consistent determination to excel amidst the challenges of life’s hurdles. Thanks to his father, the young lad picked up interest in Barcelona right from his childhood days. 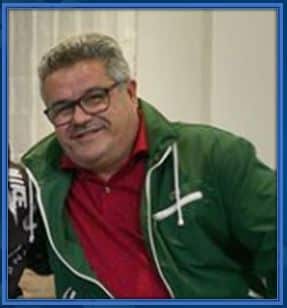 Interestingly, Pedri’s mom is also a football lover who supports Barcelona like the rest of their family. The profound interest in soccer has enlightened her about the best way of supporting Pedri in his football career. In times of struggles, the look-alike mum would often step in to advise her child. 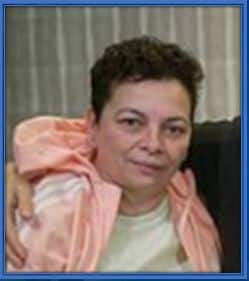 To clarify things, he has no sister, but only a brother. Having no female sibling does not mean Pedri has to do the dishes. As a matter of fact, his brother does the sister role by doing most of the cooking. 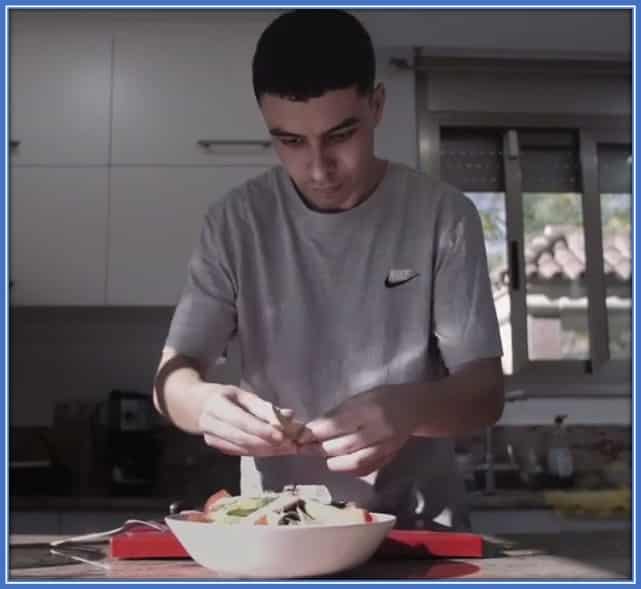 A thorough look into his Family tree shows that his ancestry having a long history with football. Asides his parents, Pedri Gonzalez grandfather also supports FC Barcelona — a feat which saw him create Penya Barcelonista de Tenerife-Tegueste (a Barca supporters’ club). Perhaps his Bio may have been less traditional if his uncles, aunts and cousins did not support Barcelona.

To round up the Life story of the Spaniard, here are a few realities that would help you get a full understanding of his memoir.

Most media personalities are of the opinion that Pedri is the last great legacy left by the past directive of Barcelona. Even though Ronald Koeman has led Barca through a poor administrative regime, he also helped the club obtain Pedri who shows a promising intellect in football.

Amidst the snowfall of early 2018, Pedri had trials with Real Madrid which ended with the cold shoulder. Unfortunately, his one week trials brought disappointment as Los Blancos deemed him as “not up to their level.”

After vast improvement the following year, Madrid came begging for his signature alongside Barca. Of course, he turned down the offer and joined the Catalans. Ironically, Pedri thanked Madrid for not signing him because he got to join the club of his dream.

Fact #3: Salary Break Down and Earnings per Seconds:

We’ve strategically put up an analysis of Pedri Gonzalez’s salary as the clock ticks. Find out for yourself how much the Spaniard has earned since you came here.

Since you started viewing Pedri Gonzalez’s Bio, this is what he has earned.

Even though many people believe his attributes seems close to Frankie de Jong, Pedri still has a long way to go. Nevertheless his potential ratings of 88 beat that of Pablo Fornals and several in-form footballers in Spain. 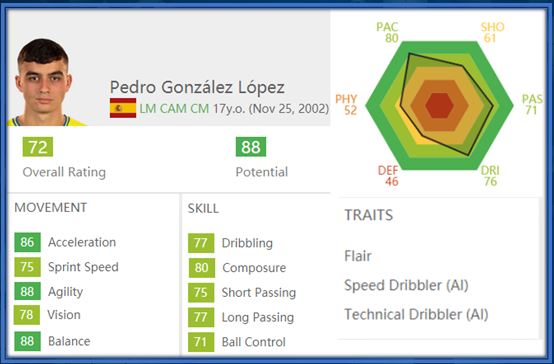 Upon his birth, Pedri Gonzalez’s parents made him bear the name ‘Pedro’ which is a Galician name for Peter. This implies Pedri was born and raised in a Christian family. We are yet to find out his level of practice for the Christianity religion.

In the course of reading his Bio, we realize something – that Pedri is a dreamer who has worked hard to make his dreams valid. Thankfully, he still enjoys the supports of parents and family members who stood with him through thick and thin.

Pedri will forever cherish those moments he spent with his father in the taxi when going for training. Of course, the delicious meals of his mother and brother will leave a lasting impression on him as well.

Finaly, Lifebogger says thank you! — for taking your time on digesting the Biography of Pedri Gonzalez. We strive towards satisfying your curiosity with interesting childhood stories of footballers.

Kindly let us know if you observe something that doesn’t look right in the article. Otherwise, share your thoughts on Pedri’s Life story in the comment section. To get a quick summary of his memoir, use our wiki table.