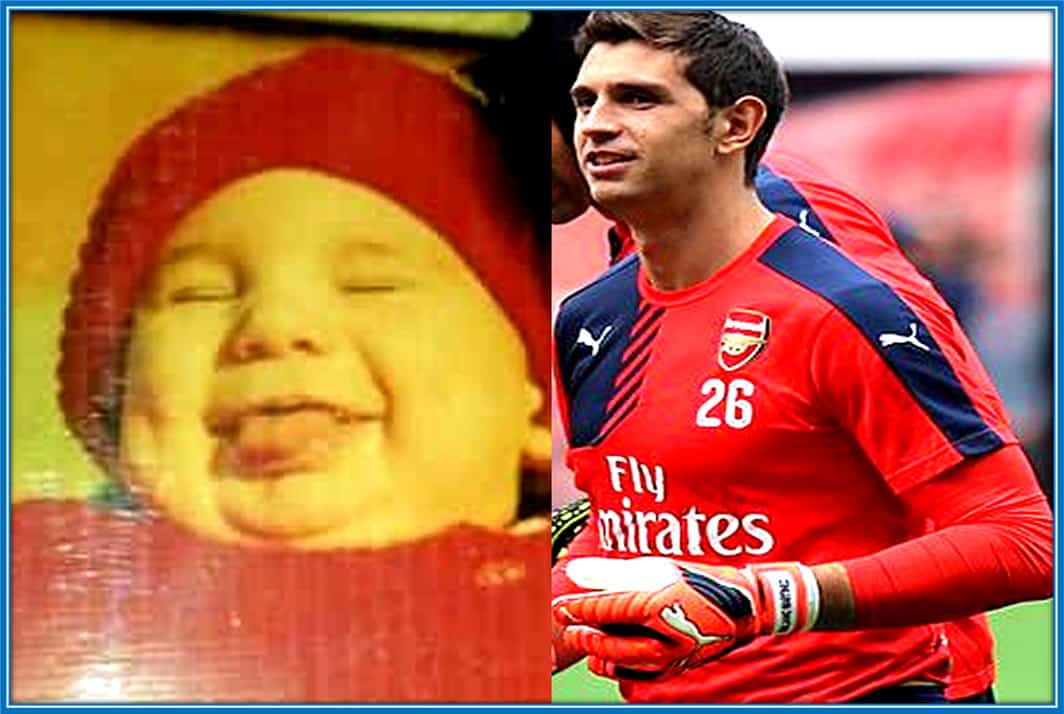 Here, we will break down the life story life of the goalkeeper beginning from his early years to when he became very rich and popular.

Yes, everyone is aware of his impressive ball control and calm personable demeanour. However, not many have read Emiliano Martinez’s biography, which is quite interesting. Without further ado, let’s begin.

For biography starters, the shot-stopper’s nickname is “Martininho”. Damián Emiliano Martínez Romero was born on the 2nd day of September 1992 to his mother, Susana and to his father, Alberto, in the city of Mar del Plata, Buenos Aires Province of Argentina.

In case you haven’t met her, here is one of Emiliano Martinez’s parents – no other than his beautiful mum alongside himself when he was a baby.

The shot-stopper is a bonafide citizen of Argentina. Results of research carried out to determine Martinez’s family origins indicate that he is of predominantly white ethnicity.

The ethnic group dominates the eastern Region of Argentina.

Martininho, as he is nicknamed, grew up in his birth city in Mar del Plata alongside a brother Alejandro?

The goalkeeper does not have a good memory of his childhood owing to the fact that he grew up in lack. Simply put, Emiliano Martinez’s parents were poor.

But you can catch him smiling whenever he talks about how he began playing football at a young age.

The goalie comes from a poor family. As such, his family did suffer a great deal in financial terms. He has seen his father cry late at night over the inability to pay bills.

That wasn’t a good sight for the young goalkeeper to behold and memories of that night are hard to forget.

Needless to say, the youngster bore the financial hopes of his family when he began a purposeful career buildup at CA Independiente.

It was at the club that he dared to dream of a future for himself in football with all the goodies that come with it.

By the time the football prodigy was 16 years of age, his career was already heading in the right direction. In fact, he had begun playing for Argentina Under 17s and was noticed by a scout from Arsenal.

Martinez was flown to the London club for trials, and he did well to impress. The Gunners did not waste time signing him up for £1.1 million, and Club Atletico Independiente was happy to part with the talented youngster for that amount.

The then youngster had a hard time settling down at his new club. In fact, he was a frightened teenager who knew not a single word in English. With family very far away from him, he had to go through a challenging first year at the club.

Martinez wasn’t even allowed to play any professional games until he turned 18, no thanks to not having a European passport. As a result, he was forced to play only friendlies instead.

When Martinez finally got a taste of Senior English football, it was with Oxford United, where he was sent on loan in 2012. He made his debut for Arsenal that same year in a League cup with Coventry City.

Thereafter, Martinez’s career was nothing much to write home about. He spent years on loan at various clubs across England. They include Sheffield Wednesday, Rotherham United, Wolverhampton Wanderers, Getafe and Reading.

“Martininho” never gained promotion to the starting lineup, and he had to bear the cross of being a backup goalie.

It wasn’t until first-choice keeper Bernd Leno picked a serious injury in June 2020 that Martinez finally got a proper chance. Not one to miss the chance of a lifetime, Martinez put up stellar performances for the rest of the season.

At the peak of his impressive spell, he made crucial saves that helped Arsenal win their 14th FA Cup title.

Martinez has now proven himself worthy of being a reliable starter for the Gunners and has the right to demand all the playtime he can get.

He could even go on to contest his place when the first-choice keeper recovers. Whichever way things work out for him, the rest, as they say (including his COPA America victory), will always be history.

Who is Emiliano Martinez Wife?

Moving on to the goalkeeper’s love life, not many know that he is in a marital relationship with Mandinha Martinez.

Not much is known about when the lovebirds met and began dating, but we do know that they became husband and wife in 2016.

Who are Emiliano Martinez Children?

It is an indisputable fact that Family comes before and after football for goalies. The case is not any different from our profile of interest.

We bring you facts about Emiliano Martinez’s parents, siblings and relatives.

Susana and Alberto are the goalie’s mom and dad, respectively. They are both Argentines and have stood by each other sides in lack and in abundance.

Above all, Emiliano Martinez’s parents are supportive of his career and will do anything to sacrifice for his success.

Martinez once recalls that his mom went hungry just to ensure that he and his brother had something to eat for that day.

It is therefore not surprising that the goalkeeper plays with his family at heart and doesn’t hesitate to share news of his victories with them.

The goalie grew up with a little-known brother Alejandro. He rarely speaks of the sibling who we trust to be one of his biggest fans. A look at Alejandro’s Instagram page reveals that he has interests in cars and racing.

Away from the goalie’s immediate family, details of his ancestry are unknown, particularly as it relates to his maternal and paternal grandparents.

In addition, not much is known about Martinez’s uncles, aunts, cousins, nephews and nieces.

Who is “Martininho” outside the world of football? What is the nature of his off-pitch character?

Does he have a life outside standing in between sticks and pulling impressive saves? To begin with Martinez persona, he is a calm, fun-loving individual who is emotionally intelligent and open to revealing facts about his personal and private life.

What’s more? he has an optimistic bearing towards life and knows how well to bid his time like most individuals born under the Virgo Zodiac Sign.

Asides from spending a good time with family and friends Martinez loves watching movies, travelling, Keeping up with racing games, playing table tennis among other interests and hobbies.

Moving on to how the goalie makes and spends his money. The goalie also has a steady stream of income flowing in from endorsements.

As such, it is not surprising to see him flaunt an expensive Corvette and Mercedez parked in the garage of his London apartment.

Did you know that he has a net worth of 1.5 Million euros as of June 2020? It is an open secret that he made the bulk of that wealth from the salaries and wages he received for playing football.

To wrap up our goalie’s bio, here are little-known or untold truths about the Argentine Goalkeeper.

Comparing his earnings to the common man:

An average person in Argentina will need to work for at least 10 years and 5 months to make 100,175,184 Argentine Peso. This is equivalent to Emiliano’s annual salary at Arsenal (2020 stats).

Martinez is big on pets, particularly dogs. He seemingly trains with his dog at their green garden and takes Instagram-worthy photos with the pet. One of those photos spots the dog wearing gloves.

Martinez has a poor overall FIFA rating of 75 points out of a potential 78. It is understood that the goalie did suffer a lack of playtime like fellow brother and countryman- Sergio Romero.

With his recent breakthrough and prospects for consistency, fans have no worries that his ratings will improve in no time.

Did you know that the Goalie shares his birth year -1992 with a number of non-sporting celebrities? they include Selena Gomez, Cardi B, Miley Cyrus and Demi Lovato.

In that year, the summer Olympics was held in Barcelona, Spain, while Winter Olympic Games were held in Albertville, France.

Emiliano Martinez is yet to associate himself with a particular religion. As such, it can’t be conclusively stated whether he is a believer or not.

But the odds are greatly in favour of the fact that Emiliano Martinez’s parents had probably raised him a Christian.

Thanks for taking out time to read this engaging article about the life journey of the Argentine Goalkeeper. We believe Emiliano Martinez’s childhood story has made you believe that patience and persistence conquer all.

At Lifebogger, we pride ourselves on delivering biographies with fairness and accuracy.

If you did come across anything offish in this article on Emiliano, please contact us or leave a comment below.