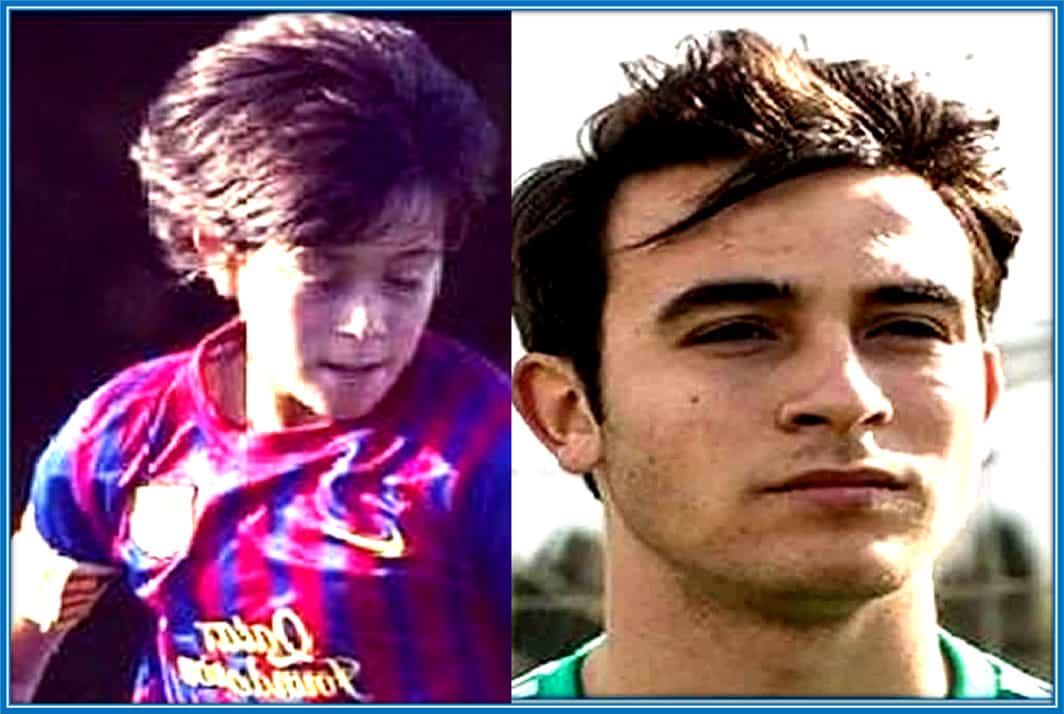 To meet your expectation, our team has taken time to explain significant events in the life of Eric Garcia, beginning from his formative years to when he became very popular.

Yes, you and I know have watched him on TV and know about his accurate passes and defensive capabilities.

However, you’ve probably not gone dip into reading Eric Garcia’s Biography, which is quite noteworthy. Now, without further ado, let’s begin with his early years and family.

For starters in his Biography reading, the footballer is nicknamed “Erico”. Eric García Martret was born on the 9th day of January 2001 to his parents, Mr and Mrs Garcia, in the Catalonia region of Barcelona, Spain.

First and foremost, the centre-back is a bonafide citizen of Spain. In addition, the results of research carried out to determine Garcia’s family origins reveal that he is of Catalan ethnicity.

The ethnic group dominates Eastern Spain and the map below tells where Eric Garcia’s father and probably his mother came from.

Did you know that the centre-back grew up in Catalonia alongside a younger sister Alicia? Growing up in the region, young Garcia was passionate about football from a very young age thanks to his dad and mum.

The Youngster acquired his intense passion for football from his well to do parents. Eric Garcia’s parents were the rich type who invested in the sport while he was a child.

In fact, the entirety of Garcia’s family were fans of Barcelona, like most Catalan households.

Unlike most kids of his age, young “Erico” as he is nicknamed took his passion for football beyond watching matches on TV or at football fields.

He was given to constant practice such that Barcelona were happy to admit him into their Academy when he was only aged 7.

While at Barca’s academy, the youngster was a wonder kid who played in older age groups. What’s more, Garcia captained every youth team he played in.

He did also exhibit tactical maturity that didn’t give away the fact that he was much younger.

When the football prodigy left Barcelona academy to join Manchester City in 2017, there was an uproar from fans and beat journalists about his departure.

In fact, many considered the move as proof of mismanagement that has beset the famous club in recent years.

Barca officials and supporters were more unhappy that the move was facilitated by Garcia’s mentor, Carles Puyol, who doubles as his agent.

Puyol considered his actions as a betrayal of the club that sees him as a legend. As a result, he gave up the agency business and took a less divisive role as La Liga and UEFA ambassador.

Upon arriving at Man City, the centre-back began making the first-team appearance for the club during their 2018 summer pre-season.

He went on to make his first premier league appearance months later, in September 2019, during an 8–0 win over Watford.

Fast forward to the time of writing this Bio, Garcia has successfully impressed in all of his cameos in the premier league campaign.

In fact, he has impressively established himself as Man City’s first-choice centre-back alongside Aymeric Laporte.

Interestingly, Barcelona is desperately seeking how to bring him back to Spain. Whichever direction first-team football tilts for him in the future, the rest, as they say, will be history.

Who is Eric Garcia’s Girlfriend?

Ever since Lionel Messi made his breakthrough in first-team football at a very young age, minds have been conditioned to something. A believe that behind every wonder kid is a long time supportive girlfriend.

The case might not be any different for Garcia, who just recently found his feet in first-team football.

However, he is yet to reveal the girlfriend whom he goes home to after each game.

This leaves many in doubt as to whether he has a girlfriend or not given that his social media handles are devoid of any intimate moments.

Nonetheless, we do know that the centre back is not married, neither does he have sons or daughters out of wedlock.

Family is where life did start for “Erico” as well as where love never ends for him. We bring you facts about Eric Garcia’s dad and mum.
Also, facts about his family members- siblings and relatives will be made available in this section.

There is little to no information about the centre-back’s parents. This is owing to the fact that it hasn’t been long since he made a breakthrough with Manchester City.
However, we do have a rare picture of his mother with him at the Barcelona academy in 2013.

Like we did mention earlier, the centre-back has a younger sister. Her name is Alicia. Not much is known about her save for the fact that she is sprouting into a very beautiful woman.
A close study of the photo below will convince you that Eric Garcia’s parents have a beautiful daughter and a handsome son as children.

Away from the right back’s parents, not much is known about his family roots especially as it relates to his maternal and paternal grandparents.
Similarly, they aren’t any records of Garcia’s uncles, aunts and cousins while his nephew and nieces are yet unknown.

Did you know that he was born under Capricorn Zodiac Sign and has a number of likeable personal traits?
Many that have interacted with him note that he is extremely polite, although not shy, and comes across as much older than he actually is.

Who is Eric Garcia outside Football?

Let us move to the centre back to life outside football. Eric Garcia is confident, analytical, practical and open to revealing facts about his personal and private life.
Whenever Garcia is not training, he can be found watching movies, travelling, playing video games and spending a good time with his family and friends.

Eric Garcia Lifestyle – Inquiry into his Net worth:

Regarding how the centre back makes and spend his money, he has an estimated net worth of $0.5 million at the time of writing this biography.
Streams of Garcia wealth originate from the wages and salaries he receives from playing top-flight football.
The Centre back also racks up significant income from endorsements. As such there are no questions regarding how he can afford to acquire luxury assets like exotic cars and expensive houses in the future as he has already positioned himself for great financial exploits in the Premier league

To wrap up our centre-back bio, here are little-known or untold facts about him.

Eric Garcia is big on pets, particularly dogs. He loves and respects them like they were his teammates and he would never hesitate to share photos of himself with them on Instagram.

Garcia is yet to give pointers to his religion. Notwithstanding, the odds are in favour of him being a Christian thanking to his first name, Eric. His sister bears the name Alicia, which has Christian roots too.

This is what Eric Garcia

Garcia has almost two years of experience playing top-flight football, a development which explains why he and others like Ansu Fati has a low FIFA rating of 69.
It is a known fact that time heals and improves. The case would not be any different for the centre back as he has the potential to exceed 85 and even become FIFA’s best footballer.

Did you know that Garcia’s birth year 2001 is significant for a number of technological and entertaining events? It was the year that Wikipedia, a Wiki free-content encyclopedia went online while Apple Computer released the iPod.
On the entertainment scene, it was in 2001 that movies like Shrek and planet of the apeshit cinemas.

Thanks for taking out time to read this engaging article about the defender’s life journey. Eric Garcia’s childhood story has made us believe that talent plus hard work guarantees success.

At Lifebogger we pride ourselves on delivering the life histories of footballers like that of the Spaniard, which we’ve done with fairness and accuracy.

However, if you did come across anything offish our Eric Garcia’s memoir, please contact us or leave a comment below.