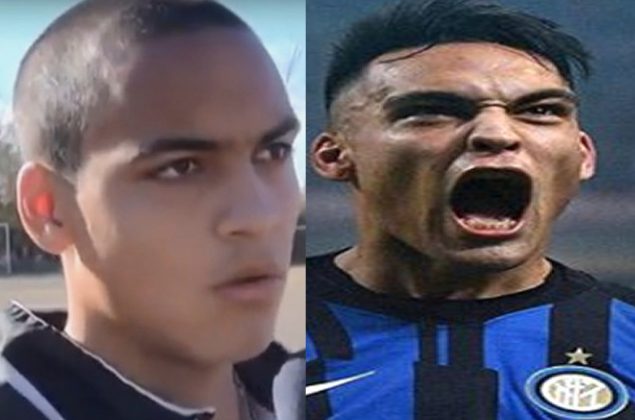 LifeBogger presents the Full Story of a Football Genius with the nickname “The Bull“.

Our Lautaro Martinez Childhood Story plus Untold Biography Facts brings you a complete account of notable events from his childhood time to the moment he became famous.

Yes, everyone knows him as that Argentine jewel and prolific striker in the 2019 COPA America tournament.

However, not many soccer fans have read our in-depth version of Lautaro Martinez’s Biography, which is quite interesting. Now, without further ado, let’s begin.

For Biography starters, his full names are Lautaro Javier Martínez. Lautaro Martinez, as he is often called, was born on the 22nd day of July 1997 to his mother, Karina Vanesa Gutiérrez, and father, Mario Martínez, in the Argentine city of Bahía Blanca.

The fast-rising superstar with a Latin American family background and origin was born as the second son and child of his lovely parents, who upon research are pictured below.

Again, from our findings, it seems Lautaro Martinez doesn’t have a sister. He actually grew up with his elder brother named Alan and his kid brother named Jano, who is pictured just behind their dad below.

Although he grew up in a city characterized mostly by the rich, Lautaro Martinez, however, had a poor upbringing in a family that had nothing to boast about except for old memories of his dad’s career success as a footballer.

For many years, it was hard for Lautaro’s dad to deal with retirement from football. All he wanted was to continue living his dreams through his son.

Early on, Lautaro Martinez was exposed to sports education by his father, who helped him to define his life ambition, which is becoming a professional footballer.

Continually being inclined towards the sport, coupled with the determination to succeed, gave Lautaro the boldness to begin attending football trials with Liniers, a local club in the city.

Taking lots of lessons from his dad paid dividends as lucky Lautaro passed his trials and got accepted into the club.

In his early years with the club as a kid, Lautaro had to go by train and bus to and fro from his family home to the academy training grounds. He would come back late in the evening and would travel again first thing in the morning.

Lautaro Martinez followed in his father’s guide and that saw him successfully scaling through the youth ranks of Liniers academy.

His ambition grew alongside his progress, and this ignited the quest to attend trials with bigger academies.

Martinez faced disappointment during his teenage years. At 15, he was scouted by the Boca Juniors club who invited him for trials.

Did you know?… The club rejected him stressing that he was not up to par to play for them.

“They told me that I had no power or speed and that I could come back if I had worked on it. I was half resigned and angry.”

Lautaro Martinez never gave up. One year later, his impressive form at the youth level caught the attention of Racing Club interim coach Fabio Radaelli, who signed him in January 2014.

While in the academy, Lautaro managed to score 26 goals in 26 matches, a feat that gave him his senior career call up.

Thanks to his performance, the jewel of Racing as he was nicknamed got called upon to represent his country and play in the Alcudia.

Did you know?… Lautaro stood out as the top scorer and the best player in the tournament.

The talented forward enjoyed a quick rise into his early senior career years for his club and also represented his country.

Lautaro endured a meteoric rise thanks to his attacking and goal-scoring prowess, a feat which made Argentine media see him as “the cross between Sergio Aguero and Gonzalo Higuain”.

It didn’t stop there. Other great clubs like Real Madrid, Valencia, Atletico Madrid, and Inter Milan began to beg on their knees for his signature.

The Argentine finally landed on his feet in Europe with inter Milan winning the bid to have him. While at the club, Lautaro got helped by the company of his fellow countryman and compatriot Mauro Icardi.

At Inter, Lautaro began breaking records despite being used as a substitute.

The height of his accolade came in the 2019 COPA America tournament where he had a formidable partnership with Lionel Messi.

Lautaro’s performance at the competition made fans label him the future of Argentine football.

Without a doubt, the world might be on the verge of seeing another youngster blossoming into a world-class talent right in front of our very eyes.

Lautaro Martinez is indeed one of the endless production line of amazing attacking players coming out of Argentina. The rest, as they say, is history.

Loverboy Lautaro Martínez dated Sol Pérez until their controversy started, which led to their split in 2017. Despite looking like the best of lovers in the photo below, both lovers argued a lot while dating.

Signs of their breakup began when Sol Perez did not want to leave Argentine for Italy after her boyfriend was called to play for Inter Milan.

“We had different goals, I wanted to stay in Argentine, to work,” confessed Sol whom the media refer to as ‘the climate girl‘.

And she continued, “Obviously, it would be a lot easier for me to go out and live in Italy, the truth is that I preferred to stay here, working 24 hours. Bluntly, Lautaro left me. I was not truly in love with him as we fought a lot, a lot.“

It didn’t take long before Lautaro Martínez found love again. Behind the superstar, there exists a glamorous girlfriend and model who goes by the name Agustina Gandolfo. She agreed to travel with him to Europe.

Both lovers, Lautaro and his girlfriend Agustina, started out as best friends, and quickly, their relationship transformed into “True love” is revealed from romantic uploads on their social media pages.

Judging from the way both lovers are fueling their love, it is only a matter of time before Agustina Gandolfo becomes a wife to her darling boyfriend.

There is a saying that there is no loyalty left in the modern football game. Surely, this doesn’t take into consideration that shared between Lautaro and his lovely dog who is pictured below.

Getting to know Lautaro Martinez’s personal life away from the football pitch would help you get a complete picture of him. Starting off, he is someone with a heart of gold, a kind-hearted person.

Despite having lots of career distractions, Lautaro, right from his career days with Racing always creates time to visit and provide comfort to the sick.

In this section, we’ll tell you more about his household. Let’s start with the head of his family.

He is often called Mario Martínez. Although, he was referred to with the nickname “Pelusa” during his playing days.

As a footballer, Mario Martinez was active in the year 1972 up till five years later when he played in the Argentine National B.

Mario Martinez once admitted that his dream was to see his son Lautaro coached by Pep Guardiola. “Let’s be clear, though, this is only a wish of mine as a father,” he once said in defence of his son.

Karina Vanesa Gutiérrez is his mum. She is the kind of mother who gets very emotional about her son’s success.

Lautaro once said this about his mother;

“After a certain game in which I led my team to victory, I called my mom. When she answered, I heard her crying: I knew she was happy for me because she knows how much I had to sweat for the chance I had”.

As stated earlier, Lautaro Martinez has two siblings- named Alan and Jano. Very little is known about Alan Martinez. However, Jano, his little brother (pictured below) is known to have found success of his own.

After going through his social media and numerous blogs which write about the ‘Things you might not know about Lautaro Martinez‘, we’ve observed that he is not the type of footballer who lives a glamorous lifestyle.

That lifestyle is filled with a handful of pretty expensive cars, beautiful WAGs, and showcasing luxurious homes.

Judging from this photo, you could agree with us that Lautaro Martinez lives a simple lifestyle. He is very good at managing his wealth, not spending like crazy.

That year “1997” when Lautaro was born, the following happened.

(1) Princess Diana has killed in Paris France in a car crash while being followed by paparazzi. (2) The drama-disaster movie (Titanic) was released. (3) What the world now knows as Wi-Fi was introduced.

Lautaro patronizes the Mandinga Tattoo shop located in Buenos Aires, Argentina. His tattoos provide him a better way to counteract homesickness as the drawings reflect his origin and history.

The vast majority of the inhabitants of his city (Bahía Blanca) are Roman Catholics although there are Protestant churches and a synagogue. Judging from this fact, it is likely that Lautaro Martinez is a Christian with a catholic faith.

FACT CHECK: Thanks for reading our Lautaro Martinez Childhood Story plus Untold Biography Facts. At LifeBogger, we strive for accuracy and fairness. If you find something that doesn’t look right, please share it with us by commenting below. We’ll always value and respect your ideas.