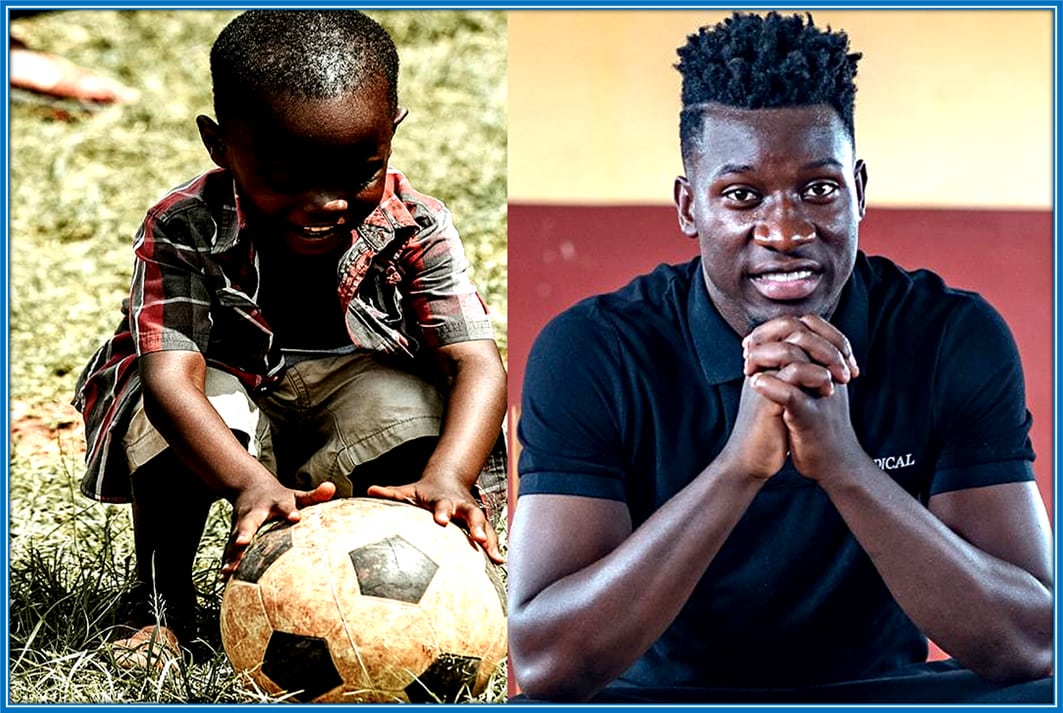 We give you a full analysis of the personal life of a Cameroonian Goalkeeping Legend, beginning from his formative years to when he became very popular.

Yes, you and I know he is one of the best shot-stoppers in Europe. However, not many have read the biography of Andre Onana, which is quite educational. Now, without further ado, let’s begin with facts of his early days and household.

For biography starters, the shot-stopper is nicknamed “Onans”. André Onana was born on the 2nd day of April 1996 at the village of Nkol Ngok located in the centre region of Cameroon.

The Cameroonian footballer was born to his mother, who is known as Adele Onana and to his father, named Francois Onana.

The shot-stopper is a bonafide citizen of West Africa. Results of research carried out to determine Andre Onana’s family origins indicate that he is of Yaounde Fang ethnicity.

This ethnic group dominates the central region of Cameroon.

Did you know that the future Goalie grew up in his birth village in Nkol Ngok alongside four brothers? We can authoritatively identify two of Andre Onana’s brothers as Wariner and Emmanuel.

Judging from his social media pics, we’ve realized that the Goalkeeper has good memories of growing up in a village whose inhabitants are happy and peaceful.

Peace and happiness do not necessarily imply wealth because Andre, like Rigobert Song (his senior countryman), hails from a poor family.

They had no electricity in the house while the then youngster and his siblings took their bath in a nearby river.

Notwithstanding, Andre Onana’s parents (see below) were hardworking individuals who just couldn’t make it to the middle-class.

As hardworking parents, Adele and Francois wanted the young goalie to focus on academics.

However, he was much interested in playing football, particularly goalkeeping, a playing position that he got adopted to from a very young age.

By the Onana was 11 years old, he was playing on a sand field when a scout from the Samuel Eto’o Academy discovered him. Thus began his career buildup in professional football.

It was at Samuel Eto’o’s Academy that the goalkeeping prodigy learnt the basics of his role for three years.

While Onana was at it, he was widely known as the best goalkeeper in Cameroon for his age group. With such recognition came interested from Barcelona, which sought to see him develop in their La Masia.

When the youngster arrived at La Masia, he was only 13 years old and was not accompanied by any family member.

It was not easy to leave everything behind at that age. Neither did learning a language come easy to him.

Notwithstanding, he was happy to play football on European soil and gave the sport his best. Little wonder his rise through the club ranks was without hitches, culminating in his move to Dutch club Ajax in 2015.

Did you know that “Onans” made his debut for the reserve team of Ajax just days after arriving at the club? He put pen on paper for improved contracts in the ensuing years. Not to forget, he achieved a meteoric rise under the command of Erik ten Hag.

Like his senior Samuel Eto’o, Onana has once been spotted at the Ballon D’Or ceremony (in 2019) as one of the nominees for the best goalkeeper award.

Although Allison Becker beat Onana to win the much-coveted prize, it might not be long before we see the latter competing with others for the prize.

It is no longer news that he is courting interest from Chelsea, and playing in the Premier League will sure make him a competitive contender for the prize.

At the time of updating Onana’s Bio, his Cameroonian side had just qualified for the 2022 FIFA World Cup. All thanks to a Karl Toko Ekambi super late strike against Algeria. The rest, as we say, is now history.

Moving on to the goalkeeper’s relationship life, not many know that the goalie is dating Melanie Kamayou.

There isn’t much known about when the lovebirds met and began dating. However, we sure know that Melanie is a mom and entrepreneur.

She has been romantically involved with Onana for a few years. What’s more? the duo has a son together called André jr (born in 2019).

Onana loves the kid dearly and describes him as “a special child to who he is proud to be a father to.”

Family arguably comes before and after football for goalies, and our profile of interest is not an exception. We bring you facts about Andre Onana’s parents, siblings and relatives.

Adele and Francois are Onana’s mom and dad, respectively. They are hardworking parents whose support were relied on by Onana in the course of his career development.

Although both parents had a preference for the goalie’s academic progression, they had to support his football career when Barcelona came calling.

Did you know that Andre Onana’s parents have been to Amsterdam to watch him play? that is an indication of how much they love and are proud of him.

The goalie grew up with about four little-known brothers, who include Wariner and Emmanuel. One of the four brothers reportedly died when he was only aged 32.

There is no record of the third brother, and neither is the goalie known to have a sister.

Away from the goalie’s immediate family, details of his ancestry are unknown, particularly as it relates to his maternal and paternal grandparents.

In addition, not much is known about Onana’s uncles, aunts, nephews, and nieces. But we do know he has a cousin that goes by the name Fabrice Ondoa.

Like Onana, Fabrice was at the Barcelona youth system. He is currently the goalkeeper for the Belgian club KV Oostende and the Cameroon national team.

“Onans” has a rich life outside the dimensions of football courts, and there is a lot that can be said of his rare calm personality away from the pitch of play.

Many attest to the fact that he is assertive, energetic, independent and open to revealing facts about his personal and private life.

Asides from spending a good time with family and friends Onana loves watching movies, travelling, playing video games, among other interests and hobbies.

Let’s move on to how the goalie makes and spends his money. Did you know that he has a net worth of 5 Million euros (WTFoot Report) at the time of writing this bio?

Onana made the bulk of that wealth from the lucrative wages and salaries that come with playing top-flight football.

He does also have a steady stream of income flowing from endorsements. As such, it is not surprising to spot an expensive Mercedes Benz parked in the garage of his house in Amsterdam, as seen in the photo below.

To wrap up our goalie’s bio, here are little-known or untold facts about him.

Onana has a good overall FIFA rating of 85 points out of a potential 89. With such a rating, he ranks 2 points higher than Kepa and 4 points than Jordan Pickford. Isn’t Onana young and blazing?

Did you know that Onana’s birth year is synonymous for a number of tech and entertaining events? it was the year which DVDs Launched in Japan while the first version of the Java programming language was released. It was also in 1996 that classic movies like Independence Day and A Time to Kill hit cinemas.

Andre Onana is yet to associate himself with a particular religion. As such, it can’t be conclusively stated whether the African is a believer or not. But the odds are greatly in favour of him being a Christian.

On the above stats, the average Cameroonian would need to work for at least eleven years and ten months to earn around 65,743,410 West African CFA franc, which is the amount Onana takes home in a month with Ajax.

As revealed by The Guardian Football, André Onana made an error that led to a shocking nine-month ban. It relates to a doping suspension and that almost took his career to the edge of collapse.

Thanks for taking out time to read this engaging article about the Cameronian’s life journey. Without a doubt, Andre Onana’s childhood story was breathtaking and we hope it has inspired you to pursue your passion, whatever may be the price.

At Lifebogger, we pride ourselves on delivering African footballers’ biographies with fairness and accuracy. If you did come across anything offish, please contact us or leave a comment below.

I’m proud and inspired by my little brother, qish you the best in 2022 world Cup.