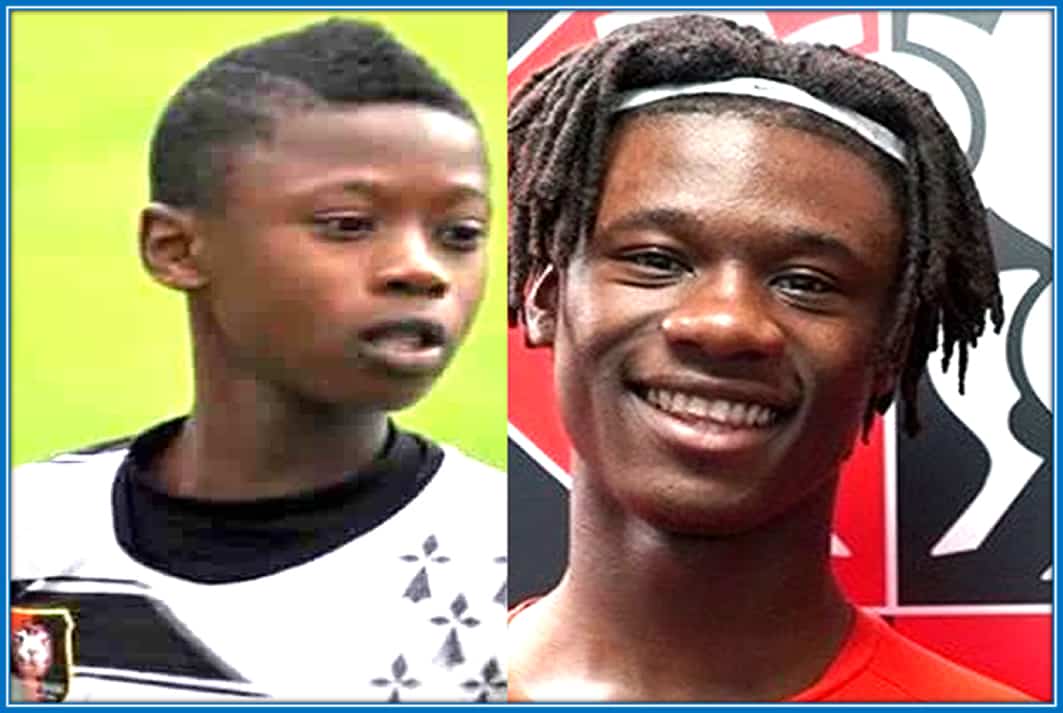 Our Biography of Eduardo Camavinga tells you Facts about his Childhood Story, Early Life, Parents, Family, Girlfriend/wife to be, Lifestyle and Personal Life.

In a nutshell, our article portrays his life story from the earliest of days to when he became famous.

To give you a taste of the engaging nature of our writeup, here is his boyhood to adult gallery – a clear summary of Eduardo Camavinga’s Bio.

As TheGuardian reports, he was one of the most exciting teenagers in world football when he busted into the scene.

Despite the accolade, we realize only a few people have read the concise version of Eduardo Camavinga’s life history. It is inspiring and without further ado, let’s begin.

For Biography beginners, he bears the nickname “Tacklevinga.”

Eduardo Camavinga was born on the 10th day of November 2002 to his mother, Sofia and father, Celestino in Miconge, a commune of Angola, located in the province of Cabinda.

The French footballer is one among five children born to his family. Judging by looks, you’ll agree with me that one of Eduardo Camavinga’s parents (his mum) shares a dominant facial resemblance with him.

The hard-tackling defender’s parents are Congolese nationals who migrated from Angola to France when he was only two years.

Interestingly, he is a citizen of France, Angola and Congo because his ancestral roots are traced to these countries. Just like Christopher Nkunku, Congolese blood flows through Camavinga’s veins.

Upon arriving in France, Eduardo Camavinga’s parents first made their home at Lille before moving to the commune of Fougeres, which is just 40 kilometres away from Rennes.

It was at Fougeres that Camavinga grew up alongside his siblings — two brothers (Sebastio, Celio) and two sisters.

Growing up in the commune, little Eduardo was initially not into football. Back then, he preferred practising Judo until his mom made him focus on soccer because he broke many things while practising the combat sport.

We must admit here that the midfielder harrowingly didn’t suffer lack during his childhood. Eduardo Camavinga’s family was somewhere between lower and middle-class citizens.

In fact, they were the type who waited for a boost to comfortability and prayed against a tragic slip to lack.

By the time little Tacklevinga was 7, his mom signed him up to a local club, Drapeau de Fougères, where he took his first steps in professional football. It is easy to spot him here, wouldn’t you agree?

Little Tacklevinga has fun ruining memories of his first-day training with the club. According to him:

“UPON SIGNING ME TO THE CLUB, I NEVER RECKON THE NEED TO MEET THE COACH. INSTEAD, I DASHED INTO THE FIELD AND TOOK POSSESSION OF A BALL WHICH KIDS ‘OF MY AGE WERE PLAYING.”

“EFFORTS MADE BY THE KIDS TO RETRIEVE THE BALL PROVED ABORTIVE AS I DRIBBLED PAST THEM AND BALLOONED THE BALL OVER THE FENCE. I RUINED THEIR GAME ON MY FIRST DAY OF TRAINING WITH THEM.”

While at Fougères, Eduardo spent four years building the dynamics of defence that are now characteristic of his gameplay.

His ability on the ball and unique style of tackling technique court admiration from teammates and opposition alike.

At the age of 11, Eduardo Camavinga’s parents approved his trials with Rennais academy, which he passed with flying colours. It was an earned move that did set him up for greatness.

Did you know?… Camavinga played in the same club where Blaise Matuidi and Ousmane Dembele had their youth development before rising to fame. The truth is, his journey was not to be any different.

Just at the time his mum, dad, brothers and sisters were beginning to enjoy his career ride, the fortunate happened.

Did you know?… Camavinga’s career with the club had barely begun when his family’s house got burnt in 2013.

The development was an enormous setback for his immigrant parents, that were trying their best to make ends meet.

During this unfortunate time, Camavinga’s dad took him from school to inspect what remained of the burnt house, he told the 11-year-old that:

“You are now the hope of the family, it is you who will raise it up.”

Living up to his family’s expectations, Camavinga recorded an impressive rise through the ranks of Stade Rennais. In fact, the press had their eyes on him when he was only 16.

When ESPN asked a former Rennes player, Hatem Ben Arfa, to comment on teenager’s talent, he waxed lyrically, noting that:

“There is nothing impossible for him. He is good on air, can tackle, and defend, assist and score. He is elegant, intelligent and has a powerful left foot.”

In December 2018, the technical dribbler signed his first professional contract with Les Rennais. In summarizing his earliest success story, we have here; six youth records broken by Eduardo Camavinga by 90Min.

At 16 years, 4 months and 27 days, he became the youngest player to play for Rennes’ first team.

The little left-hander became the youngest player to cross the 50-game mark with a Ligue 1 team since Basile Boli – at the age of 17 years and 341 days.

He became the youngest player to play for France for more than half a century. In doing so, he beat the record set by Kylian Mbappe, who made his France debut at 18 years and three months. He is also the youngest scorer of the post-war France team.

In August 2019, he was voted the youngest player of the month in Ligue 1. At 16, the Stade Rennais midfielder became the youngest winner in the history of this individual distinction.

At 17 years, 1 month and five days, he scored the first goal of his career and thus became the youngest goalscorer in the history of Stade Rennais.

Finally, the little left-hander did beat the Guinness World Records as the youngest player in history to deliver an assist in a Ligue 1 match.

At the time of writing the Biography of Eduardo Camavinga, his career is still in the beginning phase, and there was no limit to what he can achieve at Roazhon Park.

Whichever way things pan out for him, the rest, as they say (including his highlight below), will be history.

Who is Eduardo Camavinga’s Girlfriend?

Our boy keeps making fans proud by having his eyes set only on soccer. Fortunately for him, followers of the French league don’t mind whether young talents have girlfriends.

Notwithstanding, having a girlfriend would make Camavinga appealing to English fans, especially if he wants to play in the Premier League.

We advise you to check this space whenever you suspect the soccer star enters a relationship.

Talents come, talents go, and football grounds remain the same. However, this doesn’t apply to family. Alienating Eduardo Camavinga from his household would see him flop emotionally.

Why are they important to him? Relax, we bring you facts about Eduardo Camavinga’s parents. Also, we will make facts about his siblings and relatives.

Celestino is the name of Tacklevinga’s dad. He used to work at a pig slaughterhouse in Saint-Brice-en-Coglès for much of the player’s childhood.

Sometimes he never slept home because of the hectic nature of his Job. That’s how hardworking Celestino was.

Notwithstanding, he made time for his family and had faith in Camavinga’s potential to become the soccer star he is today.

Sofia is a homemaker and an impressive one at that. The media credit the supermom for steering Camavinga’s focus from Judo to soccer.

The football world wouldn’t have beheld his stellar performances if he had become a judo master. Today, both of Eduardo Camavinga’s parents reap the fruits of their labour. 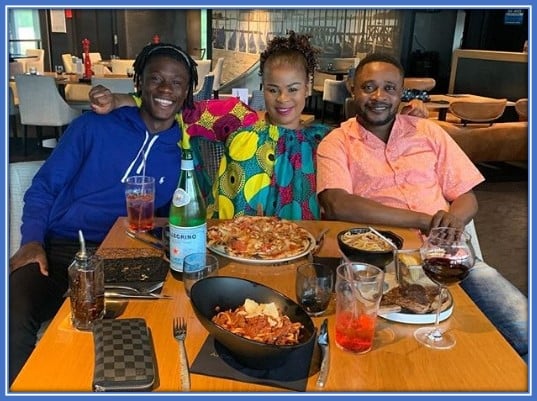 The midfield maestro has four siblings, but only two are nominally identifiable. They include his older brother Sebastio and younger brother Celio.

Like Camavinga, Sebastio had interests in Judo but switched to football. He plays amateur soccer alongside Camavinga’s dad. Meanwhile, Eduardo’s other siblings, precisely his younger and older sisters, are yet unknown.

Have you met a member of the player’s family that is not his parents and siblings (immediate family)? Neither have we. Not to worry.

It might not take long before he reveals who his maternal and paternal grandparents were. Neither would record of his uncles, aunts, siblings, and cousins evade the cyberspace forever. We also trust his nieces and nephews to identify with him soon.

We hold some truths to be self-evident regarding Eduardo Camavinga’s personality. They include his humility, focus and maturity.

He is someone who knows when to smile and when to conceal the whites that make up his impressive set of dentition.

Also, Camavinga listens to music a lot and has a thing for playing video games with his brothers.

We were not making things up when humility made it to our list of Camavinga’s personal traits. Here’s why. He has a net worth of 500,000 Euros as of November 2020 but still lives in his parents’ house.

However, We are yet to see him flash cars and houses. It may not be unconnected to the fact that he lives with his parents, who want to see him focus on improving his game. Can we safely conclude that he is conservatively rich? Yes, we can.

To wrap up this impressive bio on Tacklevinga’s childhood story and biography, here are facts about him.

Emir of Qatar Under his Spell:

The talent of Eduardo Camavinga has not escaped the owner of PSG. According to Footmercato via Leparisien, Camavinga prowess has caught the eyes of the Emir of Qatar.

Tamim bin Hamad Al Thani seems to be under his spell and has vowed to make PSG prepare for a major offensive in the 2021 summer transfer.

Salary and Earnings Per Seconds:

Since you started viewing Eduardo Camavinga‘s Bio, this is what he has earned.

The defensive midfielder is reportedly religious, but it beats our imagination as to how he doesn’t flaunt that aspect of his life on social media. Notwithstanding our bets are on him being Christian.

Eduardo Camavinga’s potential of 89 points beats that of N’Golo Kanté who has 88 to his name. He is more of a complete midfielder and one of the highest-rated youngsters in the football simulation video game.

Becoming France’s youngest goal scorer in over a century surely makes him a perfect rising star of French football. To some fans, he is a player deemed even better than Paul Pogba.

Our Biography of Eduardo Camavinga teaches us that the “right” pressure has the power to create a diamond. This became evident right from his response after his parents’ house got razed by fire.

Eduardo Camavinga’s family members (notably his Dad) made him understand he was the hope of his household. Thankfully, the youngster lived up to the expectation.

It behoves us now to commend Sofia and Celestino for giving him a proper upbringing that now reflects in his capabilities.

At Lifebogger, we take pride in delivering childhood stories with accuracy and fairness. Asides from Camavinga, we’ve got other related soccer stories for you. The childhood story of Corentin Tolisso, Djibril Sidibe, and Tanguy Ndombele might interest you.

If you see anything that doesn’t look right, do well to contact us. Otherwise, leave a comment on your perception of the Rennes prodigy. For a summary of Eduardo Camavinga’s Bio, use our Wiki table.