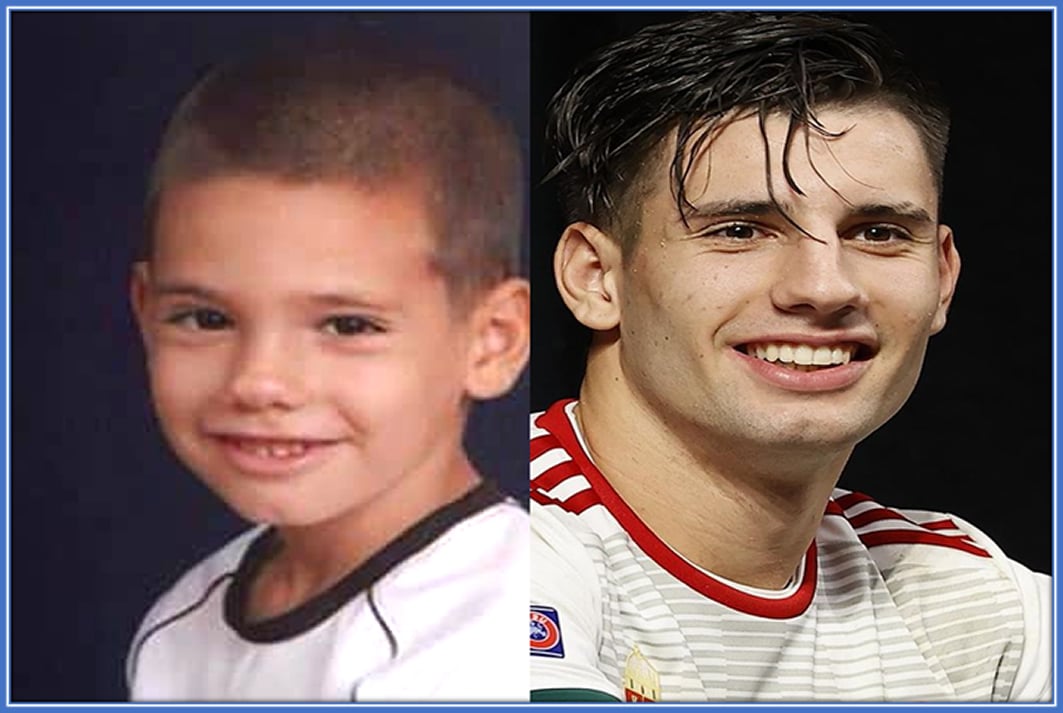 Our Dominik Szoboszlai Biography tells you Facts about his Childhood Story, Early Life, Family, Parents, Girlfriend/Wife to be, Lifestyle, Personal Life, and Net Worth.

In simple terms, we present you with the midfielder’s life journey, from his early days, to when he became famous.

To whet your autobiography appetite, here is his childhood to adult gallery — a perfect summary of Dominik Szoboszlai Bio.

Yes, many analysts in the year 2021 have predicted that he could become the world’s best midfielder in the future to come. Hence, he has reportedly caught the eye of Arsenal’s former coach, Emery.

Despite the great things he is doing for both club and country (like helping Hungary defeat England in the 2022 Nations League), we notice a knowledge gap. We found that not many fans have read an in-depth version of Dominik Szoboszlai’s Biography. So, without further ado, let’s begin.

For Biography starters, he bears the Nickname the “small one”. Dominik Szoboszlai was born on the 25th day of October 2000 to his mother, Zsanet Nemeth and father, Zsolt Szoboszlai, at Szekesfehervar, Hungary.

He came to this world as the eldest of two children born of the union between his parents. Now, let’s introduce you to Zsanet Nemeth and Zsolt Szoboszlai, the proud Mum and Dad of this great footballer.

Apparently, the young Hungarian was a cheerful kid who ate and drank football during his childhood days. Back then, he cared little about playing with the latest toys as far as his father provided him with a ball.

Of course, nothing could change his disposition to surpass his dad someday in the game of soccer. No doubt, Szoboszlai is on his way to fulfilling the dreams of his childhood.

As earlier stated, the technical dribbler hails from Szekesfehervar, which is the ninth-largest city in Hungary. His hometown dates as far back as the 5th century BC. Hence, it is one of the oldest cities in Hungary.

Szoboszlai’s place of Origin is not least amongst the strategic places with castles and fortresses in Hungary. In fact, it is home to the infamous Bory Castle.

What’s more?… Bory Castle is more of a work of art, built around a beautiful inner garden by architect Jeno Bory in the early 1900s.

Interestingly, the youngling grew up in a family that had little worries about money.

Apparently, his father was a professional athlete who supported his household with his earnings from sports.

No doubt, Zsolt had a good financial education. Hence, he knew just how to manage the needs of his family, even after his retirement.

The journey of the set-piece specialist started at a very tender age. When he clocked 6, his parents, who knew the importance of soccer, enrolled him at Videoton — a football academy — in 2006. Of course, Szoboszlai paid attention to the activities of his sports institute.

However, his father had to give him an additional lesson as his personal coach.
Barely a year after his days at Videoton youth setup, Szoboszlai’s parents felt the need to oversee his youth development.

“My father was the major factor in my development. The hours he has spent training and advising me are impossible to forget.

As a culture, he would continue drilling me whenever the team’s training sessions finished. Honestly, I’ve always done more than everyone else in my academy.”

With hard work and passion, the dribbler thrived among many other upcoming talents. His eight years of training under the tutelage of his father at Fonix Gold gave him the privilege of exploring other professional clubs.

During those years, the playmaker did a loan spell with Ujpest in 2011.

Interestingly, Szoboszlai learned a lot of things about soccer before joining MTK Budapest in 2015.

After putting up an exceptional performance at MKT, the FC Liefering came seeking his service. Hence, he embarked on a 400km journey to Austria, where he joined Liefering’s youth team in 2016.

Joining Salzburg’s second team (Liefering) did not guarantee the playmaker an automatic success. Back then, he was miles away from getting consistent playing time.

However, he kept his head straight and soon rose amongst the ranks of Liefering. Sadly, a torn ligament kept him out of action for some weeks. Hence, his injury delayed his move to the top-tier competitions.

As destiny would have it, the 17-years-old midfielder joined Salzburg under the management of Marco Rose in 2018.

There, he formed a formidable attacking trident with Haaland and Takumi Minamino. In no distant time, he was ranked amongst the 30 best young players in 2020.

There were times when the set-piece taker felt like he wasn’t making the kind of impact his managers expected from him.

As sportskeeda.com explains, it was at the Austrian club that Szoboszlai realized he needed to wake up from his slumber and play soccer professionally.

The playmaker did not only make waves in his club. He also performed extraordinarily for his country.

During one of Hungary’s matches against Croatia in 2019, Szoboszlai faced off world-class icons like Luka Modric and Ivan Rakitic.

He showed maturity beyond his age and did not look out of place as he helped his country secure a 2-1 victory.

As I write this Bio, Szoboszlai has helped Salzburg cling to three Austrian Bundesliga titles. This feat made top clubs like AC Milan, PSG, Real Madrid, and Leipzig come seeking his signature.

After he had consulted with his father, the small one sealed a four-and-a-half-year contract worth €20 million with RB Leipzig in January 2021. The rest, as they say, is history.

The free-kick perfectionist has been involved in about two relationships that we know of. First, he dated Kata (III) in 2019.

Sadly, their love story was not built on a solid foundation. Hence, it crumbled about three months after it started.

Disappointed with his first unsuccessful relationship fling, Szoboszlai did not date anyone until the end of 2020.

Thankfully, he met a beautiful blond who bears the name Fanni Gecsek and fell in love with her.

As I write this Bio, the midfielder’s girlfriend usually accompanies him on several international trips.

There she supports him from the sideline. From the look of things, Fanni may end up becoming his future wife and mother to his unborn children.

What makes one of ESPN’s breakout players for 2021 thick? First of all, he is someone who is chatty, sociable, and draws energy from crowds.

Apparently, he tends to be cheerful and assertive in social interactions. You might want to agree that he has greatly inherited the traits of the Scorpio zodiac sign.

Football is not the only thing that Szoboszlai is good at. Away from his career schedules, the set-piece taker often spends time snowboarding with his friends. Some of his hobbies include cooking and playing video games.

Dominik Szoboszlai Lifestyle and Net Worth:

Research shows he earned an approximate annual salary of €3 Million at Salzburg. What we find odd is the fact that he does not fancy living a luxurious lifestyle. Also, his social media reveals that Szoboszlai did not have to buy a ride for himself.

Apparently, Salzburg gifted him a branded exotic car, which he uses for most of his movements. Last, on his finance, we have estimated Dominik Szoboszlai’s Net Worth to be a whopping sum of €4.5 million (2021 Stats).

Since his rise to fame, the set-piece taker has strategized on how to find a happy balance between his work and family.

Of course, his career triumph is only palatable because he could celebrate it with his household. Hence, we present you with concise information about Dominik’s broods.

The midfielder’s dad is Zsolt Szoboszlai. He was a professional soccer player whose passion never died even after he left the game.

When his playing days ended, Zsolt channeled his expertise into coaching young talents at Videoton academy. There, he taught his son a lot of principles concerning football.

After Videoton dismissed Szoboszlai’s Father from their institute, he and two others created a youth academy which they named Foenix-Gold FC.

Hence, he oversaw his son’s youth development at his new sports center. No doubt, Zsolt Szoboszlai is the greatest motivation that has influenced the dribbler.

Amongst his parents, Zsanet Nemeth (his mom) has been passive since he became a prominent player. Certainly, her love and care are one of the driving forces that may have helped him endure all the hard training he underwent.

Perhaps she is a shy mother who prefers to support her influential son from the shadows.

At the time of compiling this Bio, Dominik has only one sister that we know about. He has even shown fans how much he is attached to his cute little sibling on his Instagram page. Their age difference is quite enormous.

Since his rise to stardom, there has been no information about his grandfather and grandmother.

Moreso, his extended family has not stepped out to felicitate on his success. However, we are certain that his uncles, aunts, and relatives are proud of his career achievements.

To wrap up the playmaker’s Biography, here are a few facts about him that would help you get a complete knowledge of his Life Story.

The table below gives a salary breakdown of his earnings at RB Salzburg. Of course, his financial proceedings will definitely increase following his move to Leipzig in 2021.

Research shows that an average Hungarian citizen will have to work for three years to earn what Dominik receives in a month.

We’ve strategically put up an analysis of his salary as the clock ticks. Find out for yourself how much Szoboszlai has earned since you came here.

Since you started viewing Dominik Szoboszlai‘s Bio, this is what he has earned.

Over the past few years, Dominik has learned a lot of lessons from his father. So important were the lessons that he had imprinted them on the pages of his mind, while he inked some as a permanent reminder tattoo on his left arm.

Yes! he’s inked some inscriptions that would often remind him of his struggles on his way to stardom. The tattoo reads, “Talent is given by God. But without sacrifice and determination, it’s worth nothing”.

Over the past few years, Dominik has shown lots of promising soccer qualities. No wonder goal.com included him amongst the best youngsters in the FIFA 20 video game.

It is only a matter of consistency before he exceeds the benchmark of his potential. Yes, his ball control and stamina are quite unfathomable.

Our Biography of Dominik Szoboszlai has shown that life’s journey is often made easy when parents are actively involved. It was the playmaker’s father that stared up his passion for football while his mother encouraged him in difficult circumstances.

No doubt, Szoboszlai will often be grateful to his family, who entrusted him with making them proud through sports. Certainly, they are the reason he didn’t have to give up on the reality of his dreams.

Thank you for reading our Szoboszlai Life Story. Kindly contact us if you find any irregularities in this Biography. Also, take a look at the summary of the dribbler’s memoir in the table below.