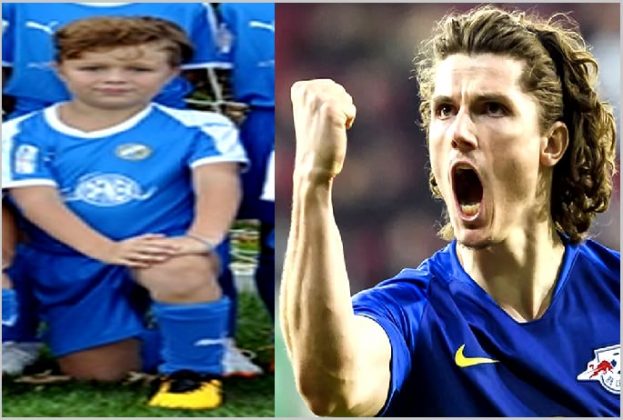 In the nutshell, this is a Life Story of the Austrian professional footballer. We begin from his boyhood days, to when he became famous.

To whet your autobiography appetite, here is his childhood to adult gallery — a perfect summary of Marcel Sabitzer ‘s Bio.

Yes, everyone knows he is a goalscoring midfielder with a great killer instinct.

However, not many fans have read a concise version of Marcel Sabitzer’s Biography, which is quite interesting. Now, without further ado, let’s begin.

For Biography starters, Starting off, his nickname is “Big Sabi“. Marcel Sabitzer was born on the 17th day of March 1994 in the city of Graz in Styria, Austria.

He is one among no fewer than two children born to his father, Herfried Sabitzer and mother.

There are no conflicting or controversial questions regarding Marcel’s Austrian nationality, especially as records prove he grew up in his birth city – Graz in Styria, Austria, alongside his little-known sister.

Growing up in Graz, it was almost impossible for Marcel not to play football. To start with, his birth city had a number of football development centres that favoured little children who are keen to become footballers.

More so, one of Marcel Sabitzer’s parents (his dad) had professional football engagements in the same city between 1995-1998.

Football is said to run in Marcel Sabitzer’s family bloodline thanks to his sporting dad, Herfried Sabitzer. Pictured below is Herfried, who was playing for the Austrian club LASK Linz at the time of his son’s birth.

Through football, he was able to support his family. Herfried early on spent quality time in helping his wife raise newly born Marcel, as well as gradually introduce him to football before he could learn to walk.

By the time a fast-growing Marcel was aged 5, he was no longer a stranger to the kinematics, dynamics, space and time dimensions of football, all thanks to the mentoring that he got from his dad.

Marcel’s dad also saw to his stint at boyhood club Admira Villach, where he did play competitive football between 2000–2001 before joining Grazer AK for a 7-year-long career buildup.

Upon leaving Grazer AK, Marcel had a one-year stint with Austria Wien (2008-2009) before his career began in earnest at Admira Wacker Mödling in the year 2009.

It was at Admira Wacker Mödling that Marcel rose through the academy footballing ranks, finally projecting himself with the club’s first team.

He made appearances for the club during the 2010–11 Austrian Bundesliga and even got into the competition’s score records for netting two goals.

However, Marcel was still far from achieving fame and had not even reached the turning point of his career.

The turning point of Marcel’s career came in 2014 when he signed a four-year contract with German side RB Leipzig after having a one-year stint with Rapid Wien.

The midfielder was immediately sent on a one year loan to Red Bull Salzburg. At the club, Marcel had a hard time integrating with teammates, and this saw him returning back to his parent club RB Leipzig.

What made him Angry with his Teammates:

In his early days with Red Bull Salzburg, Marcel was known to be a nagging Austrian who would not hesitate to wave angrily at any of his teammates who gave him a bad pass.

He even got into a brawl with one of his teammates during training, a development that made then-coach Ralf Rangnick terminate his training for that day.

While some criticized him, others knew he was someday going to be a great leader on the pitch.

Fortunately, Marcel was soon able to balance ambition with the right attitude and became an extremely valuable asset to RB Leipzig, which held him in high esteem for his ability to score goals and take amazing set pieces like David Beckham of the good old days.

It was even more impossible to ignore the midfielder in March 2020 after he found the back of the net twice to help RB Leipzig record a 3–0 win over Tottenham Hotspur in the Champions League last 16.

The victory also saw RB Leipzig progress to the quarter-finals of the competition for the first time in the club’s history. The rest, as they say, is history.

With his rise to fame and making a name for himself in Europe, it is certain that most fans would have asked who Marcel Sabitzer’s girlfriend might be or if he is actually married, which implies he already has a wife.

Moving on to Marcel’s love life, he has been in a pretty long-term relationship with his girlfriend Katja Kuhne.

The lovebirds (Marcel and Katja) met before 2016 and have been inseparable ever since their first meeting, with many regarding their relationship as one of the best in German football.

Before their first meeting, Marcel Sabitzer’s girlfriend (Katja Kuhne) was an actress and reality TV star who won the RTL show “Der Bachelor” in 2014.

At the time of writing, both are currently engaged and Katja Kuhne is soon to be labelled as Marcel Sabitzer’s wife.

Truth is, Marcel Sabitzer’s girlfriend has sealed her love for the football star as she has made him a parent to their daughter Mary-Lou who was born in 2019.

Behind every successful midfielder is a supportive family and Marcel makes no exception. In this section, we’ll bring you more facts about Marcel Sabitzer’s family members starting with his parents.

Marcel’s dad is ex-professional footballer Herfried Sabitzer. Asides from being a close and supportive father, the ex-striker is a mentor who is instrumental to the lethal strikes that Marcel executes for RB Leipzig’s best interests.

Herfried Sabitzer was born on the 19th day of October 1969 in the city of Judenburg in Austria. It was in this city he began playing football for boyhood club – SC St. Georgen/Judenburg.

Herfried’s career began in earnest at Alpine Donawitz in 1990. He then went on to play top-flight football for Austrian clubs in the next 13 years until his retirement in 2003.

Great mums have, over the years, produced great sons, and Marcel Sabitzer’s mum isn’t an exception. She is a good wife to her husband as well as an amazing supporting mom to her children.

Marcel credits his mother for being the custodian of his personal trophies, which are in a cupboard at the family’s home in Austria. According to him, She cleans and watches over all his trophies in the cupboard.

Although Marcel has once made mention of a little-known sister who assists his mother in guarding his trophies. Although the midfielder is yet to say anything about having a brother.

Similarly, not much is known about Marcel Sabitzer’s family roots and ancestry, particularly as it relates to his maternal and paternal grandparents.

In the same light, there are no records of Marcels uncles, aunts, nephews and nieces.

However, Marcel Sabitzer has a cousin whose name is Thomas Sabitzer who – at the time of writing – plays professional football for LASK as a defender.

Pictured below is Marcel Sabitzer, who looks very much like him. Without a doubt, football runs in the Sabitzer family.

Getting to know his personal life would help you get a better picture of his personality.

Moving on to Marcel Sabitzer’s life away from football, he has a rich persona that reflects the passionate, emotionally driven, confident and creative qualities of individuals whose zodiac sign is Pisces.

The midfielder, who rarely reveals facts about his private and personal life, has interests and hobbies that include spending time with nature, listening to music and hanging out with his friends and family members.

First, regarding Marcel Sabitzer’s lifestyle, it is pertinent to note that he has a net worth of over 10 Million euros (at the time of writing).

Contributing streams to his fast-growing wealth take origin from the salaries and wages he receives for playing football.

In addition, an analysis of Marcel’s spending habits reveals that he is big on keeping money in circulation- signs of a cool lifestyle.

Those who know Marcel outside of football would say it isn’t hard to catch the midfielder living a luxurious lifestyle.

Although Marcel is a mid-range earner and does have a thing for amazing houses and exotic cars. He loves vacations and is no stranger to spending quality time with his little best friend (his dog).

To wrap up Marcel Sabitzer’s childhood story and biography, here are little-known or untold facts about him.

It is evident that Marcel Sabitzer has nobody arts at the time of writing. He is rather in love with flaunting a spotless skin on his moderately impressive height of 5 feet and 10 inches.

In April 2018, the Attacking Midfielder signed a contract with Red Bull Leipzig, one that saw him netting a whopping salary of 4.5 Million euros (4.1 Million Pounds) per year.

Crunching that into smaller numbers, we have Marcel Sabitzer’s salary earnings per year, month, day, hour, minute and seconds (as at the time of writing).

Since you started viewing Marcel Sabitzer‘s Bio, this is what he has earned.

Did you know?… The average man in Austria needs to work for at least 8.1 years to earn €375,000, which is the amount Marcel Sabitzer earns in a month.

Marcel does not smoke and he is not given to irresponsible drinking because he is always conscious of the need to stay healthy and sharp at all times.

Marcel has an impressive overall FIFA rating of 83 as at March 2020! interestingly, the ratings are set to go nowhere but up until he attains his potential rating of 85.

What is Marcel Sabitzer’s Religion?:

His surname, “Sabitzer“, isn’t a Christian name, so we’ve ruled out the possibility of Marcel Sabitzer’s parents raising him a Christian.

The truth is, the midfielder is not big on religion at the time of writing. As such, his bearing on matters of faith cannot be conclusively known.

However, the odds are in favour of him being a non-believer.

Last, on our Marcel Sabitzer’s Biography Facts, we provide you with his wiki knowledge base. The table below will assist you in finding information about him in a concise and easy way.

FACT CHECK: Thanks for reading our Marcel Sabitzer Childhood Story Plus Untold Biography Facts. At LifeBogger, we strive for accuracy and fairness.