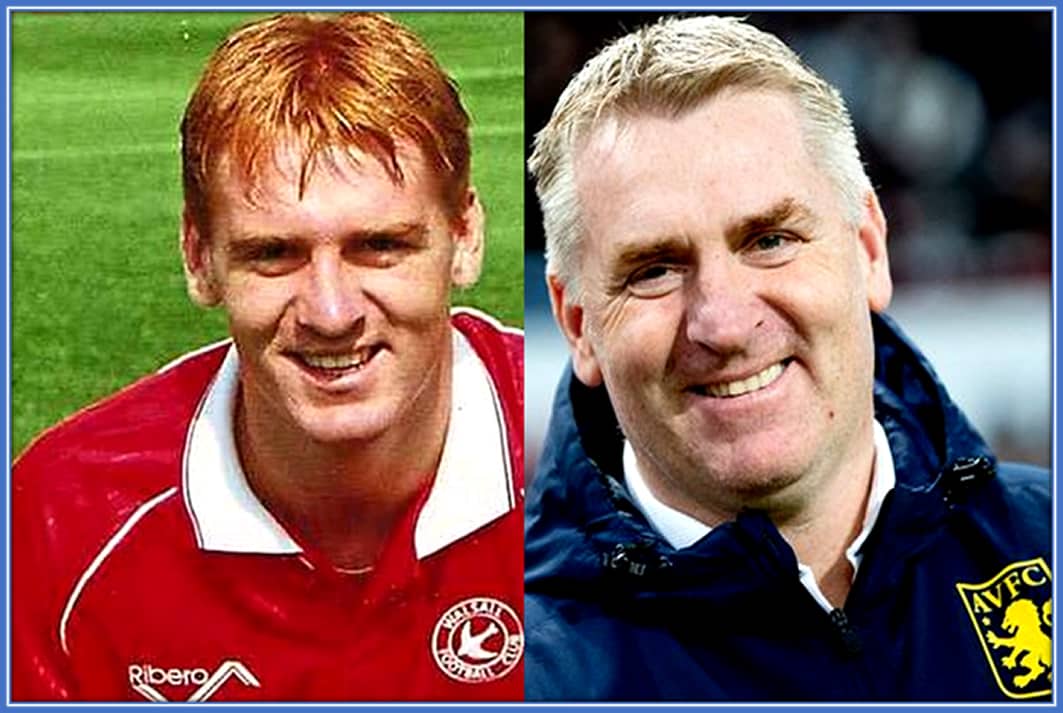 In simple terms, we present you the manager’s life journey, from his early days, to when he became famous. To whet your autobiography appetite, here is his childhood to adult gallery — a perfect summary of Dean Smith’s Bio.

Yes, everyone knows that his managerial expertise alongside John Terry has helped Aston Villa dominate the early stage of the 2020-21 EPL. However, only a few fans know about his Biography, which is quite interesting. Without much ado, let’s begin.

For Biography Starters, he bears the nickname “Ginger Mourinho”. Dean Smith was born on the 19th day of March 1971 to his mother, Hilary Smith and father, Ron Smith at West Bromwich, England. He is the youngest of two children born of the union between his parents pictured below.

Being raised by a soccer minded father gave the future Villa boss the luxury of watching many matches. Moreso, his childhood had no glimpse of boredom as he often plays football with his elder brother, Dave.

“I think one thing that helped me is my brother being two-and-a-half years older than me. Hence, I was always playing against him and older kids all the time.

We had a school behind us. So it was always a case of climbing over the fence and having our game there.”

Interestingly, Smith’s dad worked as a steward in the Trinity Road Stand – a feat which established him as a die-hard fan of Aston Villa. Usually, the Smith brothers often accompanied their father to the stadium where they clean seats for a free pass into the Holte End.

Apparently, his household was not the type that had the best financial education. However, Dean’s parents were able to utilise their income and helped their family fared comfortably as middle-class citizens. Thankfully, his mother was a great homemaker. Hence, she managed all the resources provided by the stipends earned by his father at Villa Park.

His hometown (West Bromich) which was formerly a village is rich in coal and ironstone. Its proximity to railway branches and canals made it easier for the town to develop during the era of the Industrial Revolution. Hence, West Bromwich’s economy became popular for its manufacturing and engineering flair in the 20th century. 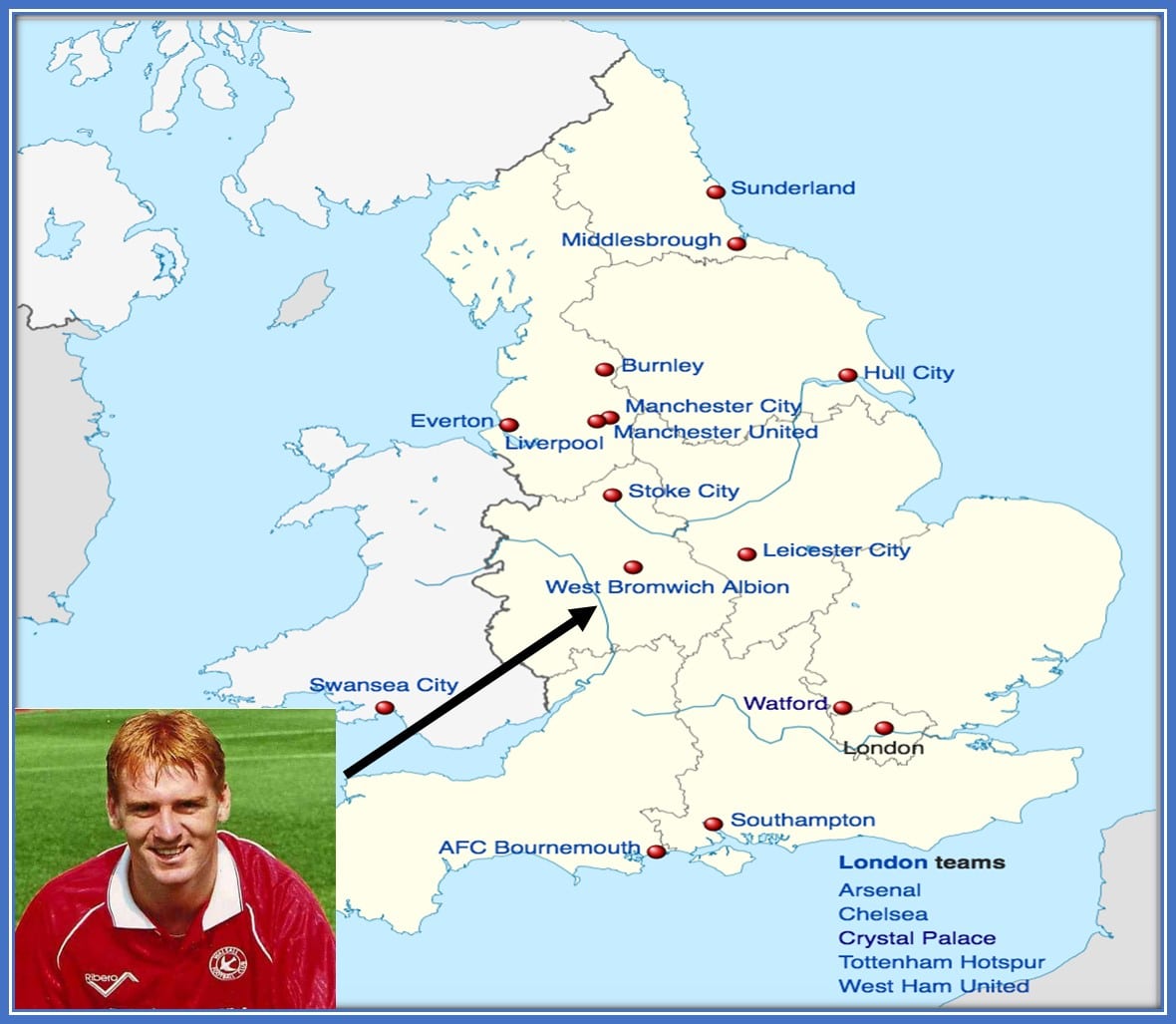 Sadly, Dean Smith’s place of origin, which is in the West Midlands, United Kingdom, experienced a series of recession. One of those unfortunate economic problems which happened in the 1970s plagued his childhood with hunger.

Interestingly, his career journey started like Gareth Southgate, who first played League soccer before taking up managerial roles. Early on, Smith, who dreamed of featuring for his favourite club (Aston Villa) started out his expedition in the fourth division.

Back then, his father knew that it was almost impossible for his sports-driven boy to enrol in a top league team at 18. Hence, he had Smith join Walsall as a central defender in 1989.

Making about 142 appearances for Walsall was enough to captivate the attention of scouts who needed his expertise. Sadly, Smith was sold to the third division team, Hereford United, in 1994. However, his contract fee was a record-breaking sum of £80,000 in his parent’s club history. 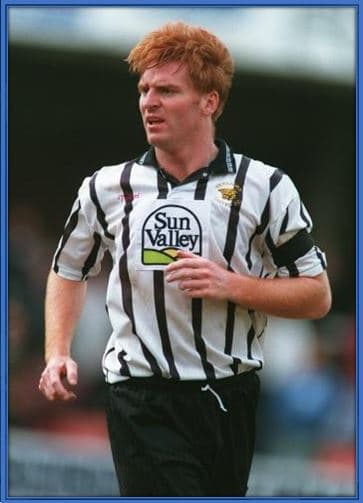 Despite all his efforts to attract potential scouts from the upper echelons, Smith ended up joining Leyton Orient in 1997. His days in the third division saw a brief glimmer of hope as he moved to Sheffield Wednesday (in the First Division) in 2003.

Scoring only one goal in 62 appearances and joining Port Vale the following year made Smith realise he was not destined for a bigger breakthrough as a player. Hence, he ended his playing career in January 2005 and promised his parents that he will make sure to succeed as a coach.

First and foremost, he started out as the youth team manager of his old club, Leyton Orient. After proving his formidable ability to bring out the best in players, Smith was promoted to be the assistant manager of Leyton’s senior squad in 2005.

Following the advice of his father, Smith enrolled in a coaching class alongside Brendan Rodgers. Hence, he obtained his UEFA Pro Licence in 2008. With his additional expertise in administration, he left Leyton in search for a greener pasture.

Do you know?… It took Smith only seventeen days to assume the position of Walsall permanent manager after becoming its caretaker coach in July 2009. Interestingly, he solidified the club by letting go of some players and signing young footballers through loan.

With his strategy of playing defensively, fans nicknamed him the Ginger Mourinho. Like Marcelo Bielsa, Smith didn’t condole laziness of his players on the pitch. His formation rescued Walsall from the relegation zone and earned many players’ professional contracts to top clubs.

In no distant time, the football administrator saw himself fulfilling his words to his parents as many teams sought after his services. He soon secured a contract with Brentford (in 2015) and entertained many fans with his passing-style strategy in the Championship. 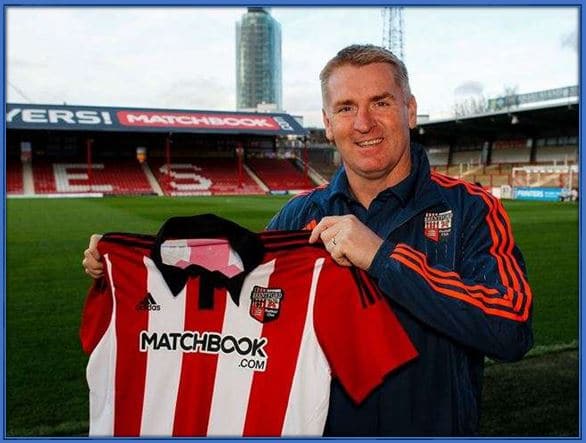 The biggest breakthrough of his career came when he was appointed the coach of Aston Villa in 2018. Barely a year after his arrival, Smith led the Villans into winning a promotion from the Championship to the EPL. 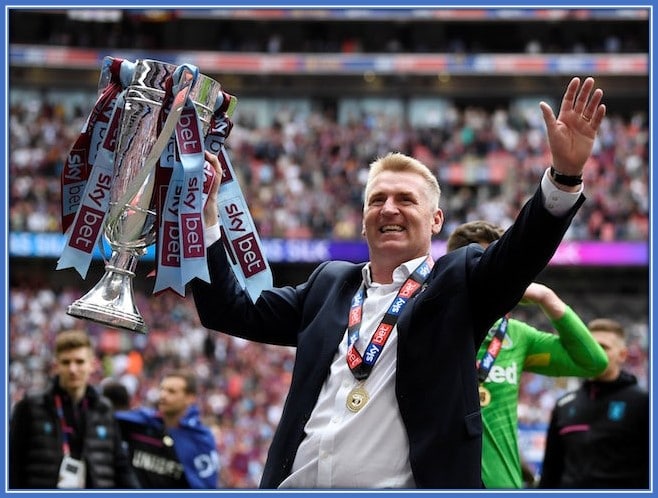 According to talksport.com, the English coach claimed to have persuaded Jack Grealish to sign a 5-year contract with the Lions after drinking a few shots. Thanks to his analytical capabilities, Dean Smith has won so many accolades to his name. The rest, as they say, is history.

One of the major reasons he is able to bear all the pressure and tension of his job is his wife, Nicola. While he enjoys his role on the pitch, his better half stays back at home to get notified of the goal margin by her daughter.

Apparently, Smith’s wife is too nervous to watch her husband’s club perform live on the soccer field. Aside from helping him cool off after his job is done for the day, Nicola is the mother to his two children (a son and daughter).

“I was told I won’t sleep much when I went into management. But I sleep very well. Sadly, I sleep better than my wife, who seems to be the one shouldering the brunt of the pressure.

Moreso, I don’t think she has watched any of our last 6 games as of July 2020. My daughter always informs her what’s going on with an alert on the phone. Truth is, my family is part of the reason why I do this and enjoy it so much.”

What makes the boyhood fan turned manager of Aston Villa thick?… For starters, he’s got a blend of the Pisces zodiac trait. On the pitch, Smith becomes furious whenever his team performs badly and jubilates when they play excellently. As of February 2020, he was accused of a furious tunnel bust-up with John Terry after Southampton loss. However, he outrightly denied the claim.

Away from the football field, Smith is practically down to earth. Both his players and family members have attested to the fact that he is organized, humble, and committed to solving problems without giving up.

Dean Smith Net Worth and Lifestyle:

No doubts, his annual salary of £1.5 million (2021 Stats) has proven that even coaches can amass enormous wealth like top-players. Also considering his years of experience, Dean’s worth has improved over the years. At the time of putting up this Bio, Dean Smith has an estimated Net Worth of £8.5 million.

Despite his enormous earnings, Ginger Mourinho has taken after the footsteps of Hansi-Dieter Flick. As a matter of fact, he lives a conservative lifestyle and pays less attention to luxurious houses as well as exotic cars.

Whenever the journey of his managerial endeavours gets tough, he always turns to his family for comfort. They are the reason why he has an easy-going career. Hence, we bring you fact about Smith’s parents, brother and relatives in this section.

The manager’s dad, Ron Smith, was a Steward (for 25 years) and die-hard supporter of The Claret and Blue. Report has it that Smith first got the motivation to delve into league soccer because of his father’s love for the game.

Sadly, Mr Ron fell terribly ill and was diagnosed with dementia in 2014. While his family kept him in a care home, the 79-year-old Englishman contracted coronavirus. After four weeks of battling with the virus, Smith’s father gave up the ghost.

Another undeniable backbone of Dean is his mother, Hilary Smith. She knew nothing about football until she met his father in 1964. Because Hilary was committed to supporting her soccer minded family, she eventually became a fan of the team they all cheered for.

Do you know?… Smith’s mother loves dogs. On several occasions, she often shoulders the responsibility of taking care of her son’s dog whenever the rest of the family travels for an away game.

His childhood days were cheerful because his brother had his best interest at heart. Smith and Dave are the only children of their parents. They’ve gone through thick and thin since they were little boys to date. Hence, the siblings have a mutual understanding of their personality and avoid hurting each other.

At the time of compiling this Life Story, we are yet to get information about his paternal and maternal grandparents. Similarly, Dean’s uncles and aunts as well as nieces and nephews are still unknown.

To wrap up the administrator’s Biography, here are a few facts about him that would help you get a complete knowledge of his Life Story.

Before he even dreamt of delving into the coaching career, Smith had already lifted the European Cup. As if fate was beckoning onto him, the 11-year-old son of Ron Smith who was babysitting one of Villa’s Rotterdam heroes got the privilege to lift the trophy.

Research shows that an average British citizen will have to work for two-and-a-half years to earn what Smith receives in a month.

Since you started viewing Dean Smith’s Bio, this is what he has earned with Aston Villa.

Our Ginger Mourinho is amongst the so many fans who believe that the Lions are not just a Football Team but is also a religion. Interestingly, he often urges his supporters to keep their faith in the club steadfast and hope for more glorious days to come.

Despite his exceptionality in organising Aston Villa’s squad, 90min.com has ranked Smith as the 18th EPL manager ahead of Ole Gunnar Solskjaer. We suspect that his rating will soar higher as he struggles to take his team above the tenth position on the 2020-21 league table.

Certainly, Dean Smith Life Story has shown that not giving up is the first step to attaining success. Also, the fact that he was driven by the intention to make his father and mother proud was enough motivation to get him on his feet.

Thankfully, Smith quickly realised that he needed to change his trajectory to succeed beyond the imagination of his family. Of course, his decision changed his career entirely.

We commend Smith’s parents and brother (Dave) for supporting his decision to delve into coaching. Without their aid, he would have fallen into an oblivious state or even worst, he would likely feel unfulfilled.

Dear esteem readers, we appreciate you for your time on this Biography. Kindly share with us your thoughts about Smith’s Childhood Story in the comment section. Also, behold a summary of Dean Smith’s Bio in the table below.