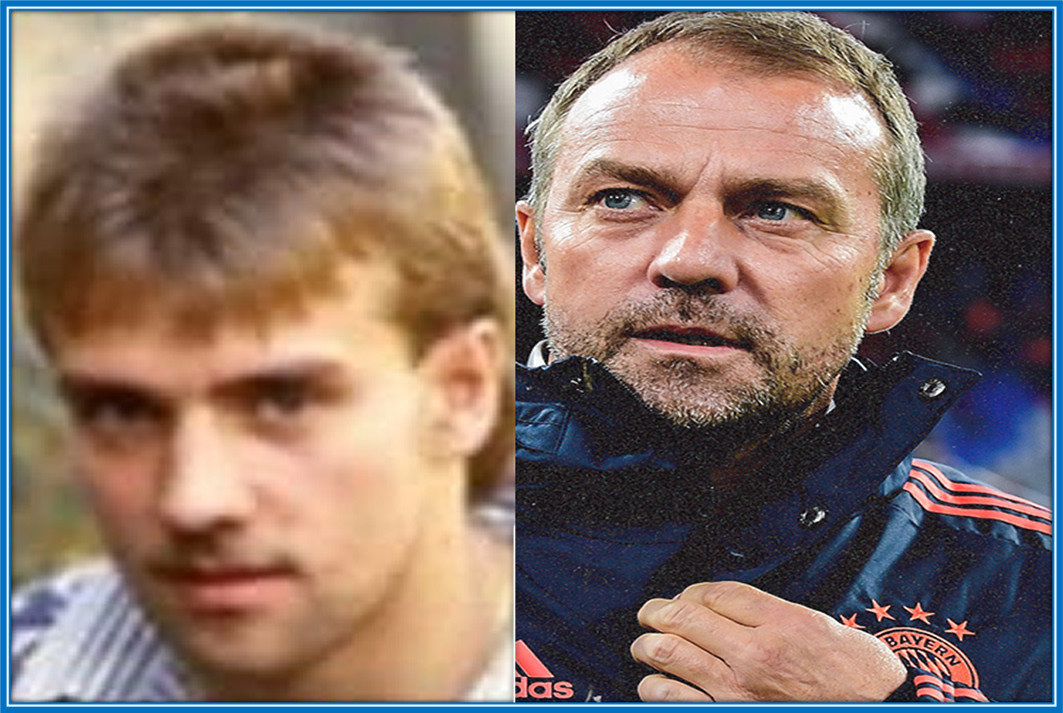 In simple terms, this is a story of the Managers’ life journey, from his boyhood days, to when he became famous.

To whet your autobiography appetite, check out his Early Life and Great Rise — a perfect introduction to Hansi-Dieter Flick’s Biography.

Yes, everyone knows he is a record-breaking, treble-winning coach.

However, not many have read Hansi Flick’s Biography, which is revealing. Without further ado, let’s start with his early life and family background.

For Biography starters, he is often referred to as the Treble-Winning Coach. Hans-Dieter Flick was born on the 24th day of February 1965 to his mother, Traudel Flick and father, Hans Flick in the small town of Heidelberg, southwestern Germany.

The German manager grew up at Mückenloch, which is a neighbourhood in Neckargemünd town, Germany.

The neighbourhood is famous for breeding musicians and footballers. Speaking to German family blog; “Make Children Strong,” the manager once said;

“I come from a hometown where you either become a member of a soccer team or of a music club.

The limited options made it easy for me to decide on joining a football team.”

There are many positive words that can describe the German’s childhood except “lack”. Hans-Dieter Flick’s parents were middle-class citizens and raised their son at a decent area in Neckargemünd.

They were in support of his choice to play soccer and ensured he had smooth beginnings in it.

It is general knowledge that the manager is a Bonafide German national.

Results of research carried out to determine Flick’s ethnicity present the likelihood that he is of Pfaelzisch ethnicity. The ethnic group can be found in his birth town, Heidelberg.

Speaking of his smooth starts, the then youngster was only five years old when he began playing for local side BSC Mückenloch.

At the peak of his career with SV Sandhausen, Flick was spotted and brought to the club by Bayern Munich when he was 20.

The five seasons he spent with them saw him win four Bundesliga titles and the 1986 DFB cup.

When the then midfielder suffered a career-threatening injury at his next club, FC Köln, he knew the time had come for him to retire.

At 28, he stopped playing professional soccer but spent some time appearing for the amateur team Victoria Bammental.

It wasn’t long before flick delved into coaching and began managing Bammental. The German spent several seasons with them as a manager before he was appointed as head coach of Hoffenheim in 2000.

He helped them achieve promotion to the third division and set them on the right path for his successor, Ralf Rangnick, to ensure their advancement to Bundesliga 2 in 2007.

At the peak of his managerial career, Flick had a stint coaching Red Bull Salzburg before he became the assistant coach of Germany in 2006.

He worked with his boss Joachim low, to lead the German national team to the peak of global football.

Their initial successes include a second-place finish in the UEFA Euro 2008 as well as clinch third position in the 2010 FIFA world cup.

Germany won the next world cup under their management, a development that made it easy for Flick to land his next job as sporting director at the German Football Association.

He dis also work as director of sport at Hoffenheim before returning to Bayern Munich as their assistant manager in 2019.

When head coach Niko Kovac left the Reds on mutual consent in November 2019, Flick became interim manager and led the Reds from the fourth position to become winners of the Bundesliga title for the eighth consecutive time.

It wasn’t long before he led the team to win the DFB Pokal in July and the battling out PSG’s Thomas Tuchel to win the 2019/2020 Champions League title in August 2020. The rest, as they say, is history.

About Hans-Dieter Flick’s Wife and Children:

The German has been happily married for over 30 years. Hansi Flick’s wife is no other person but Silke. They met as teenagers and went on to officially become couples at a wedding held in Bammental.

Asides from being one of his support pillars, Hansi Flick’s wife is the mother to his two daughters, Kathrin and Hannah.

Both children have grown matured. In fact, Hannah (the younger daughter) is already a mother to no fewer than two children.

Family can be everything we want them to be. The love and support they give are extraordinary. We bring you facts about Hans-Dieter Flick’s parents, siblings and relatives.

The manager’s dad goes by the name Hans. He is a very supportive dad who has shown much interest in his son’s managerial duties.

He practically feels the same way Flick would feel in defeat or victory. Flick’s mother also his best interest at heart and works with her husband to give their son the very best of parental care.

Such love and support was proven in its best form when Hansi Flick’s parents worked with residents of Bammental (where the manager lived at the time) to give their son a warm reception after his 2014 world cup win.

We are yet to find records of the manager siblings. As a result, there is a likelihood that the manager is his parents’ only child until he gives any insight that suggests the existence of a brother or sister to him.

We are yet to get information pertaining to the manager’s family roots particularly as it relates to his maternal and paternal grandparents.

Similarly flicks’ uncles, aunts and cousins are yet unknown, while his nephew and nieces are yet to be identified.

The manager we know is not all about soccer. He creates quality time for friends and family and has an enviable relationship with players and other members of the coaching staff outside the football bubble.

The obvious traits that define Flick’s personality are his humility as well his dislike for arguments and gossip. He loves travelling, learning new things, watching movies among other interests and hobbies.

Let’s talk about the coach’s net worth in 2020 and what he does to make his money. Flick has an estimated net worth of $1 million. The sources of his wealth are salaries and wages he gets paid as manager.

He also has the assurances of a lucrative winning business. Thus, Flick is financially secured in all respects.

Flashy cars and expensive houses are not on his concern list. He is rather looking at staying relevant in the lucrative business of coaching.

Behold facts about the coach specifically aimed at helping you get a complete picture of him.

Young flick was once a bank apprentice. He took up training for the job as a backup that he could fall back to if he doesn’t succeed in soccer.

He was very much dedicated to his training that he turned down an offer to play for VFB Stuttgart, who proceeded to win the 1983/84 Bundesliga title.

Contrary to what you believe, Hansi is not part of the coach’s name. It is rather a nickname because he doesn’t like being referred to as Hans-Dieter. Thus, most people know him by his nick Hansi.

Flick used to own a sport shop in Bammental where he conferred the honor of the youngest honorary citizen in 2015.

Younger residents of the town grew up to be accustomed to the shop. However, the coach closed it down because he and his family had more important things to attend to.

Thanks for reading the chronicle of Flick- the Bayern Munich’s record-breaking, treble-winning coach. Hans-Dieter Flick’s Biography inspires us to prepare for opportunities and maximize them when they arrive.

The German Manager actually did that by using his 2014 FIFA World Cup experience and loyal personality to win the 2019/2020 Champions League.

At Lifebogger, accuracy and fairness are our guiding principle in delivering memoirs about your favourite managers.

Did you see anything that doesn’t look right in the life story of Hans-Dieter Flick? Let us know about it in the comment section, OR tell us what you think of him.