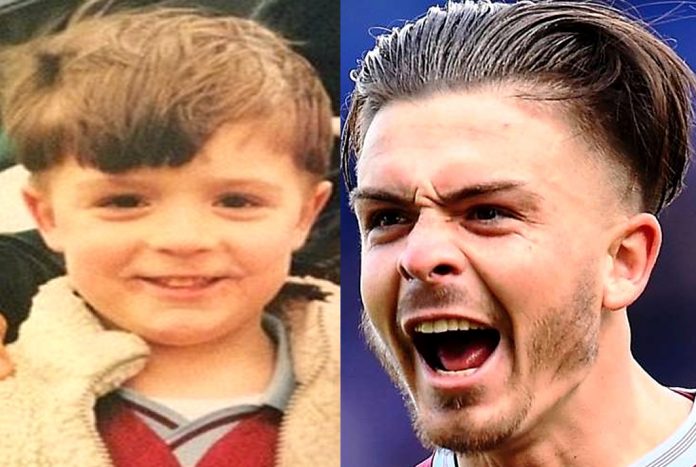 LifeBogger presents the Full Story of a Football Genius who is best known as “Jack“.

Our Jack Grealish Childhood Story Plus Untold Biography Facts brings you a full account of notable events from his childhood time to date.

Yes, everyone knows about his ability to run and ghost past defenders. However, only a few consider Jack Grealish’s Biography, which is quite interesting. Now, without further ado, let’s begin.

For Biography starters, Jack Peter Grealish was born on the 10th day of September 1995 to his mother Karen Grealish and father Kevin Grealish in the city of Birmingham, United Kingdom.

Below is a lovely photo of Jack Grealish’s parents who look in their late 40s.

The English footballer with English and Irish family roots was born as the first child of three children to his parents, Karen and Kevin. Also to note, Jack Grealish’s Dad and Mum are devout Catholics.

As a child, Jack was often seen as this happy kid who enjoyed every single first-born advantage.

Although born in Birmingham in a middle-class family, Jack was raised alongside his kid brother, Kevan Grealish and sisters- Kiera and Holly.

He grew up in Solihull, a large town in England and home to the manufacturing plant of the famous four-wheel-drive car Land Rover.

Jack’s early life growing up in Central England was marked by a family tragedy. Grealish witnessed the death of his baby brother, who goes by the name Keelan Daniel Grealish.

He died when little Jack was just only four years old. Little Keelan Daniel pictured below died a COT death at the age of nine months in April 2000.

As Google puts it, this kind of death properly known as sudden infant death syndrome (SIDS) is the term used to describe the sudden death of a baby in its sleep where no cause or reason can be found.

Living in Solihull saw Jack Grealish’s family in addition to kids from Catholic families having their kids attend Our Lady of Compassion Roman Catholic Primary School.

Grealish found success in sports while in school, a feat that prompted his decision to follow football. Speaking of football, every member of Jack Grealish’s family were Aston Villa fans.

Jack had his favorite Aston Villa player to be Paul Charles Merson, a former footballer who found success as an attacking midfielder and playmaker for Aston Villa.

Paul later became an English football television pundit with SkySports. Below is a photo of Jack in an Aston Villa shirt with his cousin alongside his football idol Paul.

Back then, both boys formed the habit of waiting outside the Villa’s training ground to take photos with Paul Merson, their idol who made 101 Premier League appearances for Villa from 1998 to 2002.

Away from visiting Villa park training, young Jack took to football practice in a bid to follow the footsteps of Paul Merson.

Playing local football with friends saw him not just perfectly horning his skills, overstepping his mark, but doing things out of the blue with his soccer balls.

Those were the sort of things similar to that of an attacking midfielder.

The joy experienced by Jack Grealish’s family had no bounds when they saw their very own passing trials with flying colors and getting himself enrolled in the Villa academy roaster.

Giving football an early start was what Jack Grealish’s parents wanted for their son.

While playing for Aston Villa academy, Jack continued his education as advised by his parents, who didn’t want him to stick only with soccer.

Jack won his first trophy at the age of 7. Did you know?… His trophy medal was donated to his school in honor of his late brother Keelan.

Donating the trophy made the school honor his little brother as they created “The Keelan Daniel Grealish Memorial Cup” which is now used to tag their house competitions.

After graduating from Our Lady of Compassion Roman Catholic Primary School in Solihull, Jack continued his secondary school education even as an academy player with St Peter’s Roman Catholic Secondary School.

He agreed with his parents that secondary education would be his final, a decision which he believed would help him concentrate on his career.

The 2012–2013  season was a turning point for Jack Grealish’s career as he helped his team in winning the NextGen Series. Find below the moment they celebrated the trophy.

The tournament was held by 24 different countries across Europe from the 15th of August 2012 to the 1st of April 2013.

This victory saw the English and Ireland-born talent getting a senior career call-up and another call-up to represent his national team of Ireland.

Still on the national scene after making his switch from Ireland to the England U21 squad, Jack in 2016, helped his team in winning the prestigious Toulon Tournament.

Grealish after the tournament continued to shine as a winger and attacking midfielder for Villa. He has been praised for his ability to run and as some would call it, ghost passing his opponents.

As a consequence of his nimble movement, he got rewarded as he became a first-team player and later, a captain. As a leader, Jack led his team in amassing a club-record 10 league win in a row.

Again, he also guided his in-form Villa side to a place in the play-offs where victories over rivals gained them promotion to the Premier League after an absence of three years. The rest, as they say, is now history.

Behind the Aston Villa Legend, there exists a stunning model girlfriend in the person of Sasha Attwood.

Jack Grealish met his girlfriend while in secondary school. They were both teenagers who schooled together at St Peter’s Roman Catholic Secondary School in Solihull.

They have been together ever since (as at the time of writing), a symbol of their drama-free relationship.

Sasha Attwood is a model from Birmingham. She began her profession after being scouted by an agent at the age of 13 while she was out shopping with her mum in their hometown.

Attwood is currently signed to MOT Models, one of London’s and Europe’s leading fashion model agencies.

What makes Jack Grealish tick?. Sit back and relax as we help you get a complete picture of his personality off the pitch.

Starting off, when it comes to football stars, the topic “handsome footballers” is often among fan’s favorite discourse.

Many fans see Jack Grealish as a Beckham wannabe thanks to his handsomeness which is summed up in the photo below.

Letting asides his handsomeness, lots of his fans have asked the question;… Why does Grealish wear child-sized shin pads with his football socks rolled down whilst playing?

The answer is simple!!. Grealish’s leggy looks are a result of a superstitious belief which for him has worked out.

It helps him to maintain his ability to control the ball effectively. Grealish also loves to chop off the edges of his boot which go along with his short socks or having a long one rolled down.

This sort of belief has seen referees warning him against pulling his socks down and the act of wearing children’s shinguards.

Starting off, Jack Grealish’s Family are all lifelong Aston Villa fans. His immediate family members number in 6 and they are all English born with Irish extended family and relatives.

One of Jack’s brothers, Kevan Grealish, is absent in the family photo below.

Jack Grealish is among top footballers who have their fathers as agents. Kevin plays a crucial part in his son’s footballing life.

From negotiating better terms in his contract to managing his off-field life, he does it all. Jack’s mum, Karen Grealish, is not very vocal, unlike her husband.

She prefers to concentrate on her low-key motherly duties. Both of Jack Grealish’s parents are presently reaping the benefits of instilling a tough mentality into their son.

Meet Kevan Grealish, who is known by fans to be Jack’s younger and only surviving brother. Kevan just like his parents and sister is also a die-hard Villa fan.

Kevan has made headlines in the past in his role in defending his big brother from negative comments made by the media to him.

According to 101GreatGoals, he once took to the media to rubbish the story made by journalist James Nursey of Mirror Football, who claimed that Grealish was “heartbroken” and “let down” after a failed Tottenham move.

Jack has two lovely kid sisters who bear the names Holly and Kiera. The eldest of the two sisters, Kiera celebrated her 14th birthday on the 14th day of October 2015.

This by implication means she would be turning into an adult by the year 2019.

Jack’s grandparents are the reasons for his Irish heritage. His paternal grandmother hails from Sneem, a village in the Republic of Ireland.

Jack Grealish also has Irish roots through his maternal grandfather who hails from Dublin.

Irish blood also flows from his father’s side as his paternal grandfather is also from Ireland precisely Gort, a town in south County Galway West of Ireland.

Judging by this, you could easily trace his doggedness to be linked with his Irish heritage.

It’s in Jack’s nature to save money and always put something on the side. He sees buying exotic cars and Mansions as irrational spending and as a bad habit or a matter of being spoiled.

As at the time of writing, Jack chooses to hold on to practical solutions that don’t cost much. This is a definition of Jack Grealish’s lifestyle.

Around April 2015, TheSun allegedly published images showing Jack Grealish to be inhaling what is known to be a nitrous oxide, laughing gas, or ‘hippy crack’ for recreational purposes.

TheSun made clear that the incident took place about 6 months ago, and the act wasn’t a product of Jack’s recent performance for his club.

This act saw him getting warned by Tim Sherwood, his former manager.

HIS ASSULTER WAS SENT TO JAIL:

On the 10th day of March 2019, Grealish was assaulted by a notorious pitch invader who invaded the pitch to attack him during the Villa derby match away to Birmingham City.

Later in the second half, Grealish made a statement by scoring to give Aston Villa a 1–0 victory.

The 27-year-old attacker was arrested and charged to court, where he pleaded guilty to the offences of pitch encroachment and assault. He was sentenced to jail for 14 weeks.

LifeBogger appreciates you for taking this time to go through Jack Grealish’s Biography. We care about accuracy and fairness in our quest to deliver our fans the History of England-Born Footballers. Jack Grealish’s Bio is a product of LifeBogger’s British or United Kingdom Football Stories.

Please reach out to us (via comment) if you notice anything that doesn’t look right in our article on Jack Grealish’s History. Don’t forget to stay tuned for more English Football players’ Histories. The Childhood Life of Ben Godfrey, Jaidon Anthony and Michail Antonio would interest you.