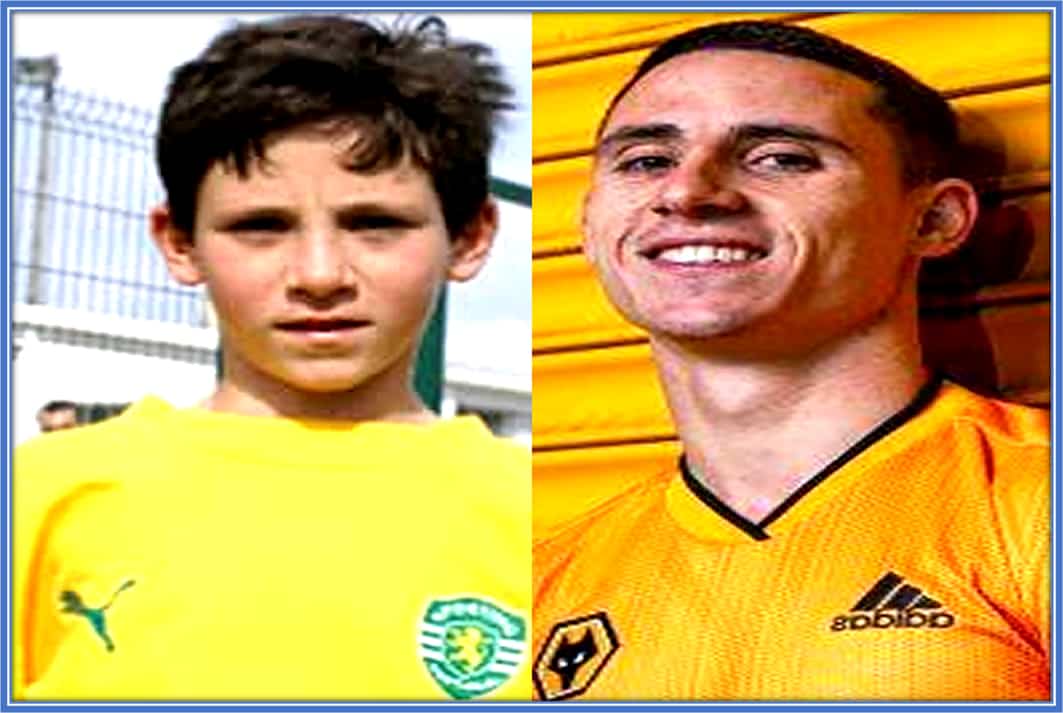 The Biography of Daniel Podence tells you Facts about his Childhood Story, Early Life, Parents, Family Facts, Girlfriend/Wife to be, Net Worth, Lifestyle (Cars), and Personal Life.

In summary, we present you with a complete Life Story of a Portuguese Footballer, from his early days to when he became famous.

To whet your autobiography appetite on the engaging nature of Daniel Podence’s Biography, Lifebogger has deemed it fit to serve you his Early Life and Rise Gallery.

Yes, Daniel Podence is a diminutive playmaker – one of the best Speed Dribblers among Portuguese Football Players (2020).

His ability to create goal-scoring opportunities has got fans talking about him.

However, football lovers know little about his Bio, which we shall unveil in a jiffy. Without further ado, let’s begin with the story of his youth.

The Portuguese Footballer was born on the 21st day of October 1995 to his father, Quintino Podence and mother, Maria do Ceu Castelo in Oeiras, a Municipality in Portugal.

As a little boy, Danny was quite fragile and sensitive. Early on, he became emersed in the fantasies of playing professional football and his ambitions never became a passing fantasy.

Back then in his hometown of Oeiras, young Danny would rally around the streets with his peers, who took turns to test their skills in soccer.

In an ardent desire to make sure his son has a promising future, his dad (Quintino Podence) did seek a way to help his child put his football potential into good use.

Apparently, he was raised in a household that could afford all their basic needs. Thanks to the flourishing economic condition of his birthplace (Oeiras), Daniel Podence’s family had lived as a middle-class family.

Our research shows that a poor Portuguese family can take 125 years (five generations) for its descendants to reach an average wage.

But that is not the case for Daniel Podence, whose parents did measure up to the average standard.

As it is customary in Portugal, the prolific speedster does have two surnames that reflect his paternal and maternal roots.

To begin with, he owes his paternal last name (Podence) to his great-great granddad, who was named after the village of Podence in Macedo de Cavaleiros.

On the other hand, his surname (Castello) originates from his mother’s bloodline.

Do you know?… Podence birthplace (Oeiras) is one of the most developed municipalities in Portugal and Europe.

Being known to have the lowest rate of unemployment in Lisbon, Oeiras is home to those who love to visit its beautiful coastlines.

As earlier stated, the Portuguese winger had always shown great potential for football as a kid.

Just at the tender age of six, the future Wolves Man had already slated a dedicated timetable for football training. Seeing the future at this time saw the quest to set himself up with a youth club.

By the time he was 8, Daniel Podence’s parents had enrolled him at Belenenses Academy, which is one of the oldest Portuguese sports clubs.

Steadily and with sufficient stress that could make him feel the desire to give up, he kept on.

Early Career Life — When he stood his ground against his Family:

In 2005, an opportunity came for the young speedster to join Sporting CP. Sadly, his entire family didn’t like the idea since they prefer he waits for a chance to play at Benfica.

You can guess, Podence household were huge supporters of Benfica.

Back then, he was only 10 but had to stand his ground against the preference of his family. To cut the long story short, Podence persuaded his father and mother to allow him to take his chance.

After much debate, the entire family supported and he joined Sporting CP — the club Christiano Ronaldo began his career life.

To avoid failure in his career path, Podence spent the next nine years of his life honing his skills at the Sporting football academy.

Thankfully, he made a remarkable improvement which earned him the privilege of debuting for Sporting CP reserved team in February 2013. 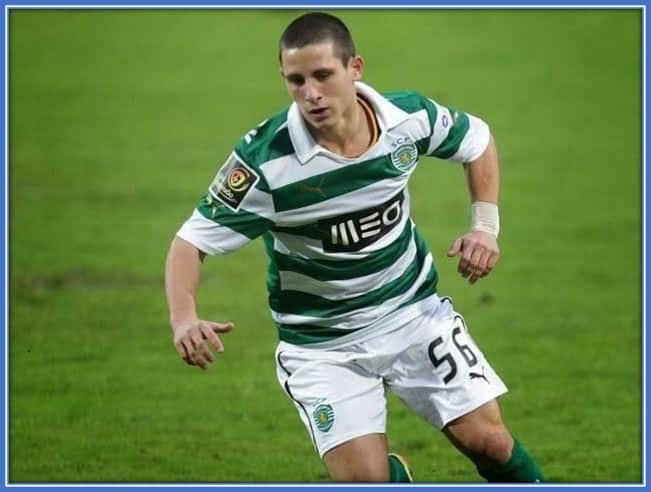 In no distant time, the young Portuguese player joined his club’s first team and started to impress his fans.

After playing with Sporting CP for about two seasons, Podence was sent on a season-long loan at Moreirense in September 2016. Interesting, the god of football made him help the club win the 2016–17 Taca da Liga. 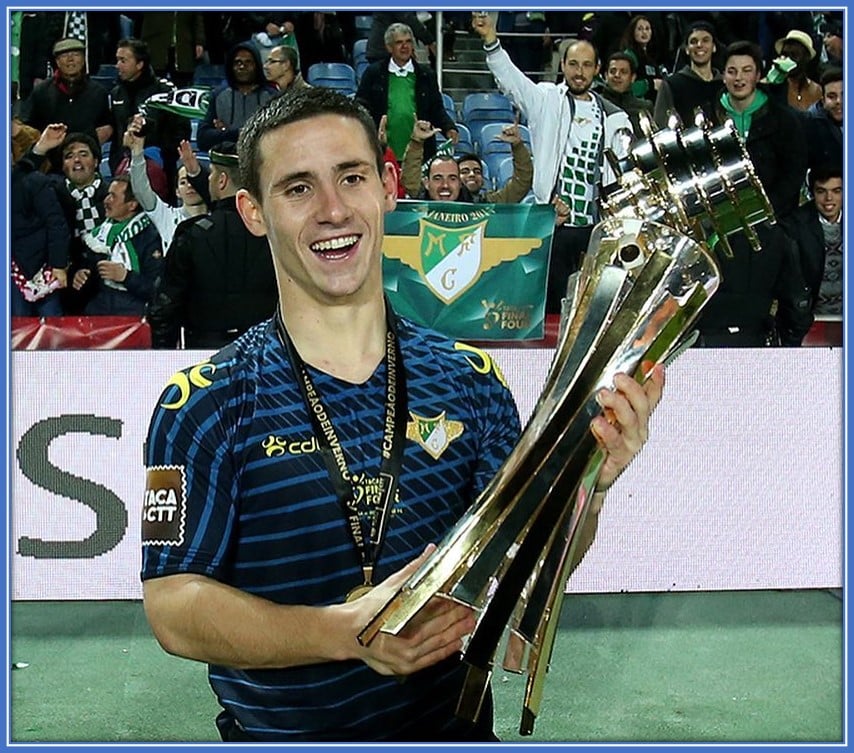 Seeing how well the prolific winger had been performing in the Primeira Liga, Sporting manager (Jorge Jesus) recalled him to the team.

Upon his return, Podence and his fellow teammates faced a life-threatening phenomenon as some of their supporters made a violent attack on them in 2018. 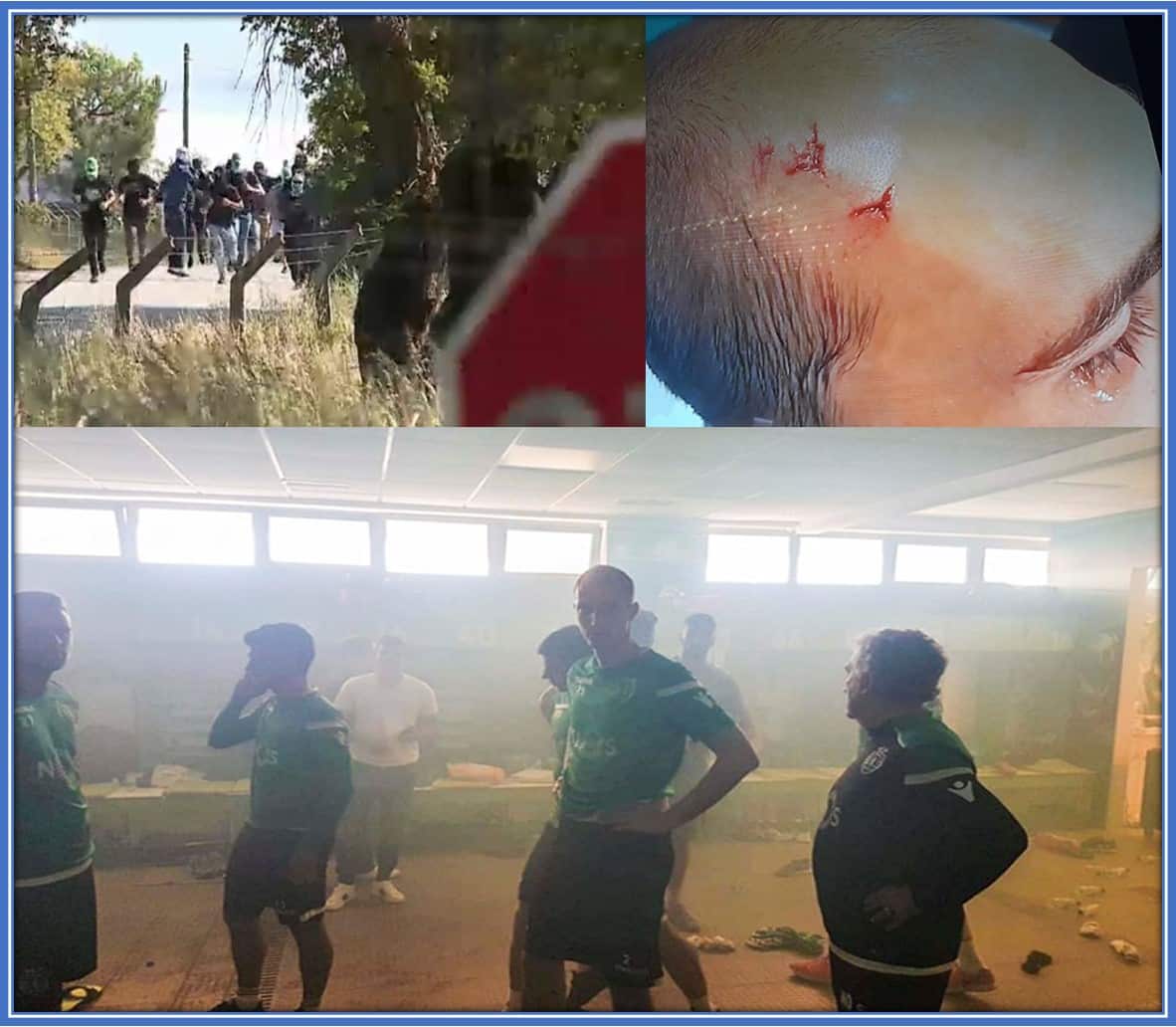 The Decision to Move on:

Barely a month after the assault, Podence concluded that his club was no longer safe for him. Hence, he ended his contract with Sporting CP and sought his parents’ advice for the next course of action.

“For me, football is a way of life. Also, it is a set-up for my emotional balance. With the recent happenings, I have failed to find the euphony I need to play.

Despite everything that Sporting has taught me, they didn’t teach me to deal with an environment of violence and threats, where I fear for my safety and that of my family.”

However, his new club had to take some legal action with Sporting CP before agreeing to sign him for €7 million.

The first of his Podence success story begins like this. First, he made his family proud as he debuted for Portugal by replacing Joao Felix at the 75th minute in a 3-0 victory against Sweden in 2020. This was followed by the big shocker, a move to the premier league.

In January 2020, Wolverhampton Wanderers signed Daniel Podence for a four-and-a-half-year contract with the sum of £16.9 million.

Interestingly, Sky Sports named him ‘Player of the Match’ in his first Premier League appearance. It’s now time to move on to his love life and the rest, as we say on his career story, is now history. 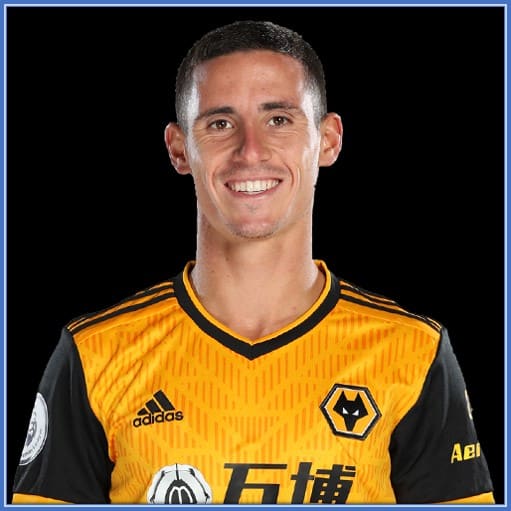 Following in the footstep of his brother, Ruben Neves, the prolific winger started dating early.

Both Danny and his girlfriend, Kayra Biskowski began their relationship at a very young age — since 2010. Despite being unmarried, both lovers over the years have done things like couples.

At the time of writing Daniel Podence Biography, he has engaged his long-time girlfriend, Kayra. It is only a matter of time before he finally walks her down the aisle and takes a life-changing oath of spending the rest of his life with her.

Interestingly, his relationship with his wife to be, gave rise to the birth of his cute daughter. Most of the time, Podence addresses his child as Fatty when he posts her pictures on social media.

Undoubtedly, the speedster is known for his down-to-earth nature. Maybe you can say he has an introverted personality.

Here is proof — Podence does restrict himself from enjoying some quiet moments off the pitch.

Sometimes, he listens to music as he seats in an isolated place, and there, our very own Podence ponders about the meaning of life. 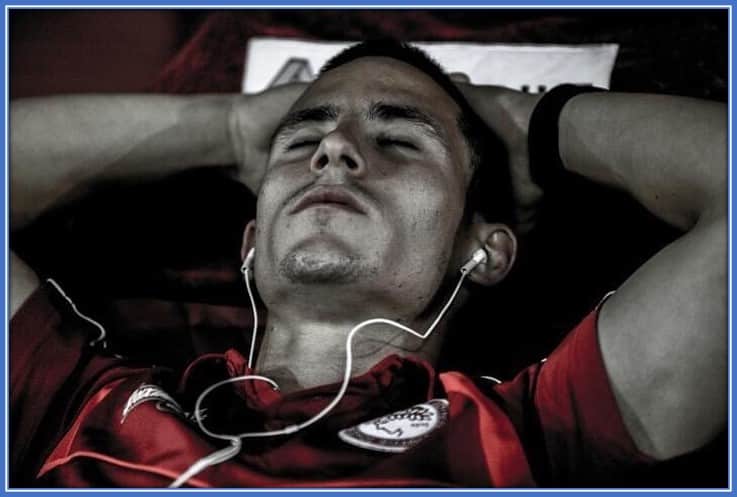 As was previously stated, he grew up in Oeiras where people constantly visit the beach.

That being the case, he does develop the habit of visiting the coastlines. Like Andre Silva, Podence is a water lover who does spend some of his spare time in pools and beaches. 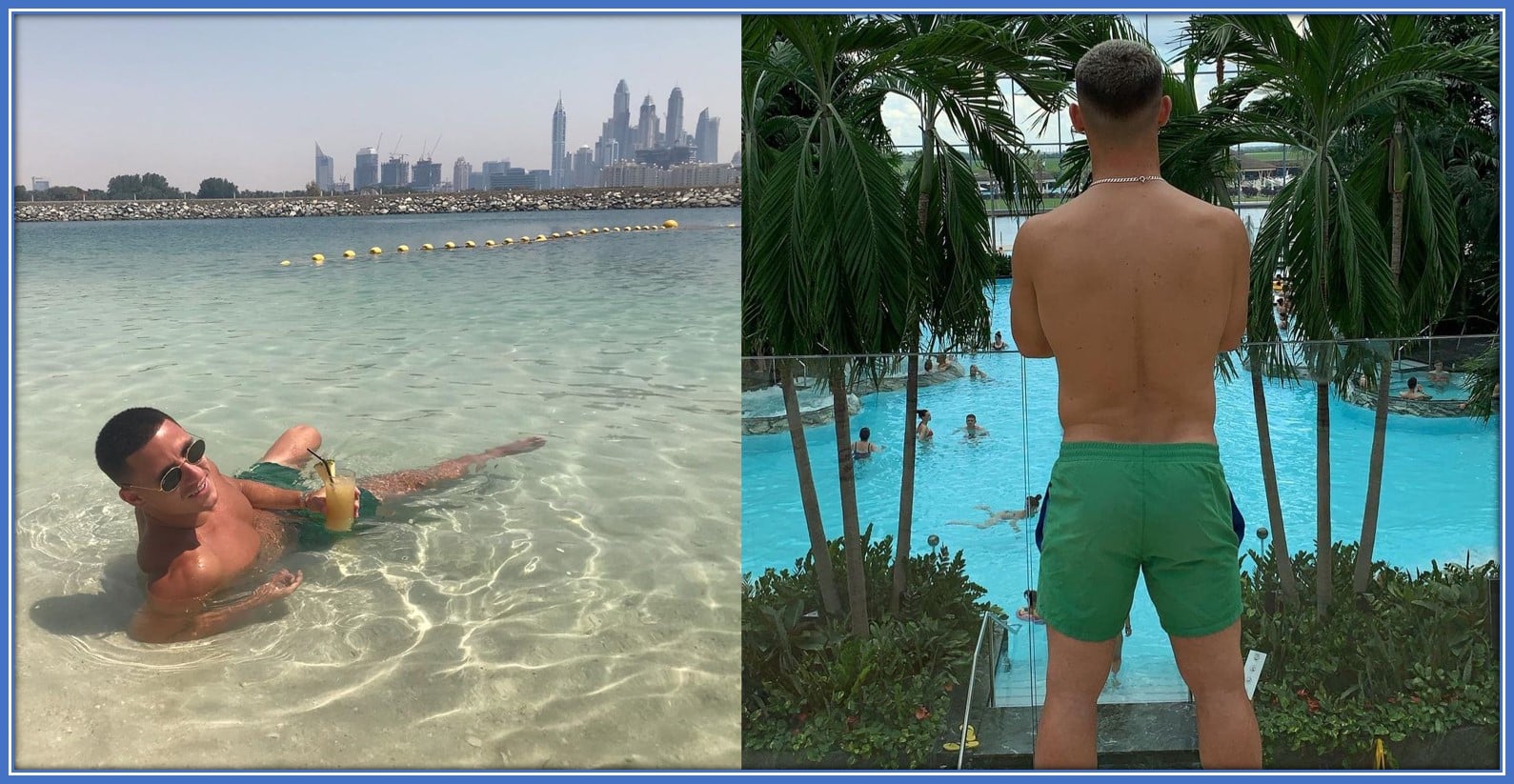 No doubt, his transfer to Wolverhampton has increased his Net Worth to an estimated sum of £2.6 Million (2020 stats).

Also, his contract deal at the time of writing this Life Story has placed his annual salary at a whopping sum of £1.3 Million.

Thanks to his high financial proceedings, Podence has the right to live big. Like Diogo Jota, he is a fellow dog lover who lives a less luxurious lifestyle. Podence’s Mini Cooper below says tells a lot about his person.

The ultimate feeling of togetherness has been a driving force that has engineered his passion for success.

Truth be told, Podence is more concerned with keeping his household united. Be it friends, parents or relatives, he considers all as his FAMILY. Now let’s tell you about his household starting with his Dad.

Throughout his Life Story, the prolific winger has received lots of support from his dad.

Funny enough, Mr Quintino Podence had no choice than seeing himself cheering for his son at Sporting CP. This goes against the family’s old standards as they are all die-hard fans of their rival club — Benfica.

One thing we know is the fact that Danny is closer to his mom than any member of his family. Here is proof.

On several occasions, Daniel Podence has posted the picture of his pretty mother on social media. No doubt, she is always watching him from the sidelines. 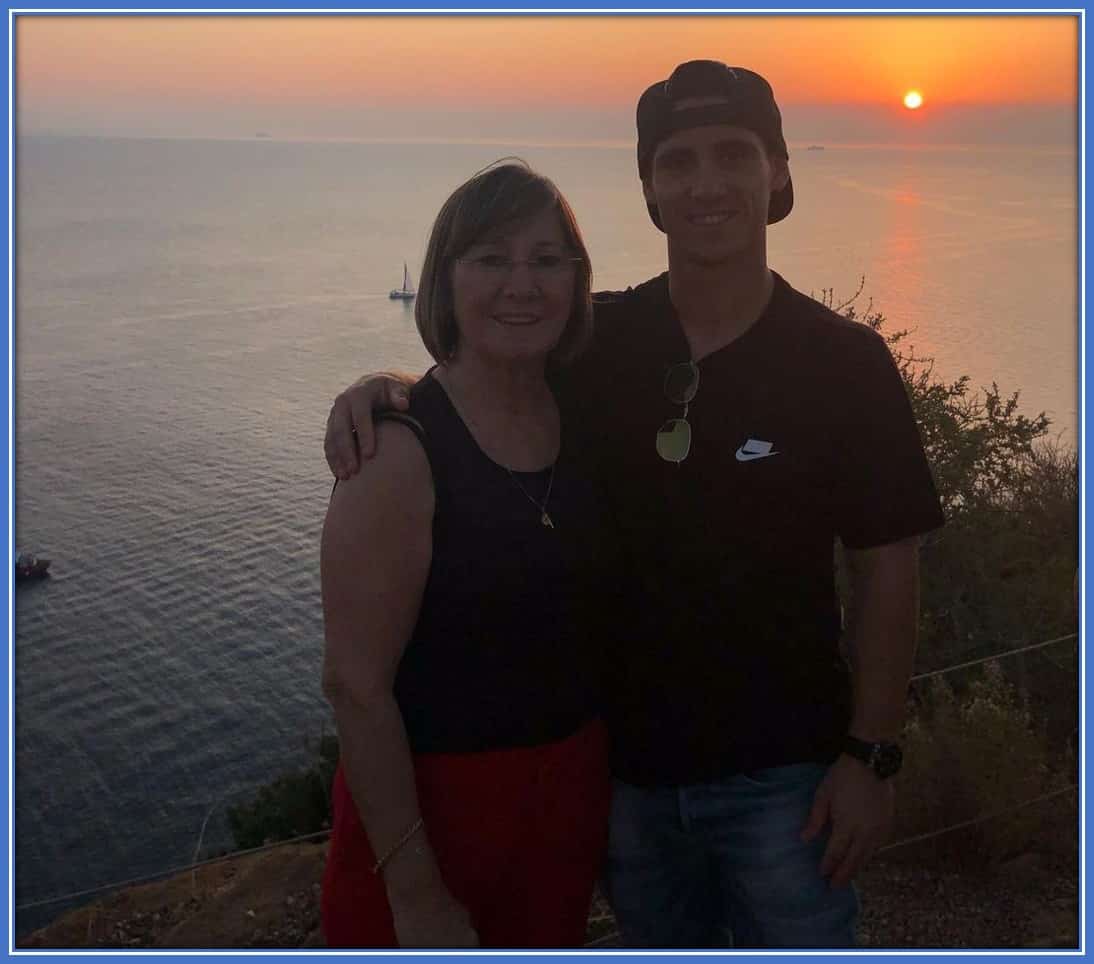 Since his rise to fame, the talented player hardly talks about having a brother or a sister. However, found a clue about them.

Danny does consistently posted some pictures of a particular set of children who are likely to be his nephew and nieces. Hence, he is likely to have some elder siblings — sister(s).

Despite being a Benfica fan, his grandfather, Alcino Podence, has explained that he is proud of Podence’s performance at their rival club — Sporting CP.

Truth be told, Podence’s entire uncles and aunts are constantly singing his praise even before he joined Nuno Espirito Santo’s Wolverhampton wanders.

To help you get a complete grasp of his bio, here are some intriguing truths that would help you understand him better.

Salary Breakdown and Earnings Per Seconds:

Following his move to Wolverhampton Wanderers, Podence has been earning millions yearly. The table below gives a comprehensive breakdown of his salary.

We’ve strategically put up an analysis of his 2020 earnings as the clock ticks. See for yourself how much he has earned since you came here.

Since you started viewing Daniel Podence’s Bio, this is what he has earned.

Aside from playing football and visiting Waterbodies, the Portuguese have got quite an interest in lawn tennis.

Similar to Francisco Trincao, he loves to save each special memory showcasing to fans his tennis playing skills via his Instagram page. 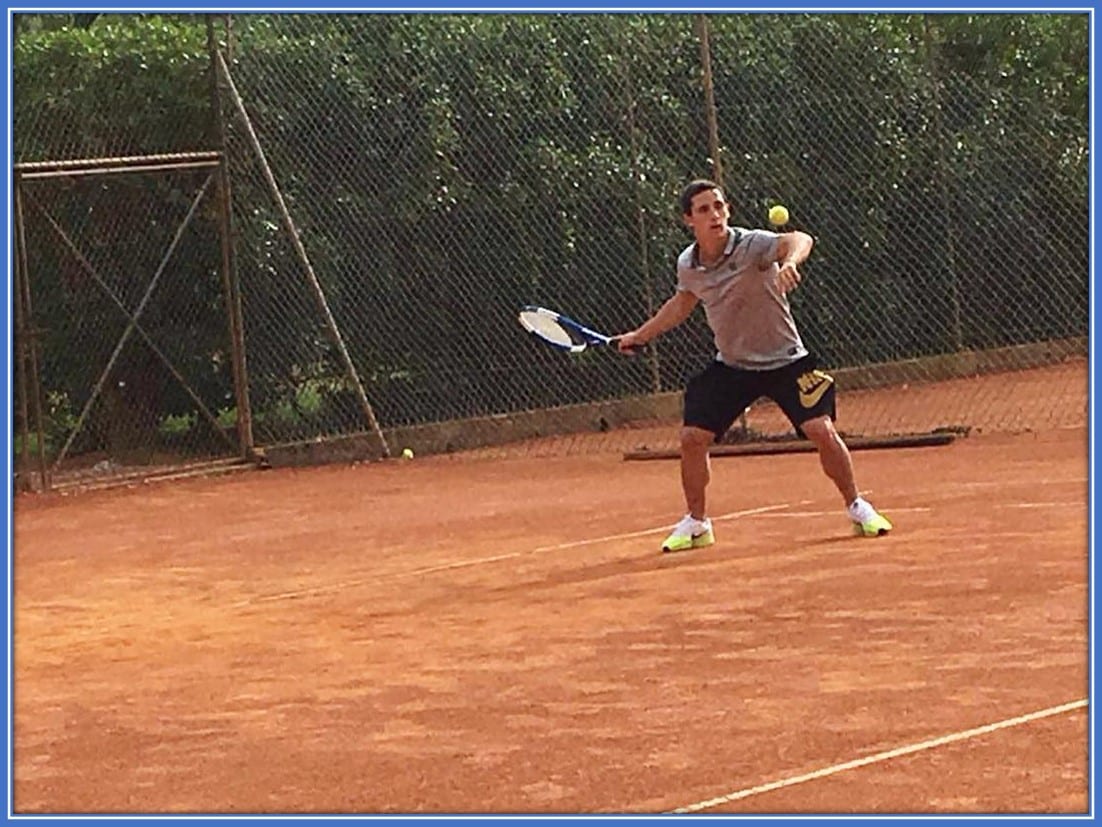 The 2020 analysis of his football profile has explained why he ranks amongst Squawka’s Fastest Premier League Players.

As a matter of fact, FIFA lovers will attest that Podence has got an unbelievably high pace which earns him the nickname “The Speedster”. He has also got a good number of football qualities, as shown in his SOFIFA stats. 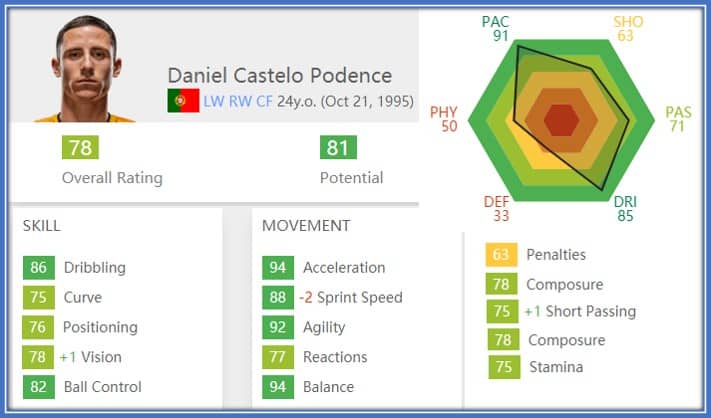 The journey through Daniel Podence’s Biography does tell us about the fact that he is someone who has known what he wanted in life since his childhood days.

With this in mind, nothing has stopped his shine. Without a doubt, Wolves manager Nuno Espirito Santo’s demands for attacking signings is justified with the coming of Daniel Podence.

In all honesty, we cannot fail to acknowledge the excellent parenting examples that his father, mother and grandparents have shown.

DONT FORGET, even when their joy lies in cheering Benfica, his family threw all that away by supporting Sporting CP. They did that — all in the name of giving their son the maximum support he needed.

On our final note, thank you for reading Daniel Podence Bio. Kindly contact us if you find anything that doesn’t seem right. Otherwise, share with us your thoughts on the Duminitive Winger.