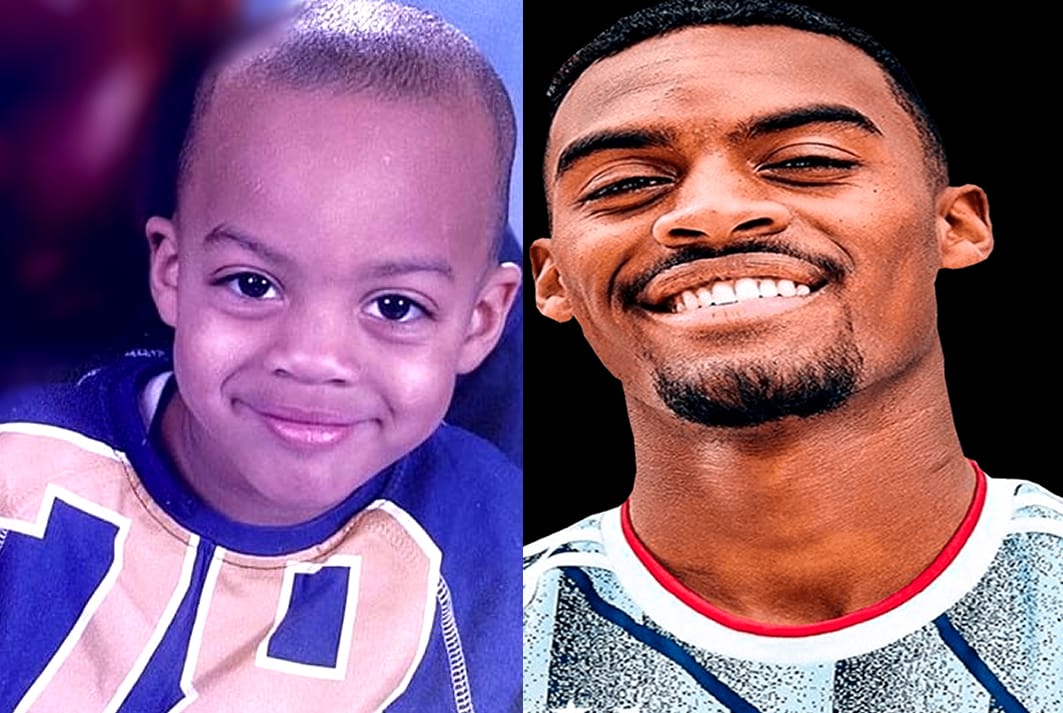 Our Biography of Ryan Gravenberch tells you Facts about his Childhood Story, Early Life, Parents, Family, Girlfriend/wife to be, Lifestyle (Cars), Net Worth and Personal Life.

In the nutshell, we present you the concise Life Story of the Dutch footballer — from his early days to when he became famous.

To give you a taste of the engaging nature of Ryan Gravenberch’s bio, here is a pictorial summary of his early days to adulthood. No doubt, it does tell a story.

In case you didn’t know, Ryan Gravenberch is dubbed the ‘Paul Pogba-like’ Ajax wonderkid. Everyone knows he is an impressive midfielder who is known for his flair, outside foot shot and technical dribbling skills.

However, we notice that only a few fans have read a concise version of his life story. We’ve prepared it just for you and without further ado, let’s begin.

For Biography Starters, he bears the nickname ‘Ryany’. Ryan Jiro Gravenberch was born on the 16th day of May 2002 to his mother, Aretha and father, Ryan Gravenberch (Sr) in the city of Amsterdam, the Netherlands.

He is the youngest among two brothers born of the union between his parents.

The Dutch midfielder spent his early years alongside his older brother, Danzell Gravenberch at his birth city in Amsterdam.

Growing up in the capital city (which is home to the Johan Cruijff Arena), football was Ryan’s childhood and heritage sport.

Perhaps you never knew. The Amsterdam native comes from a household who eats and drinks football.

In fact, both of Ryan Gravenberch’s parents used to be soccer players, while his older brother Denzel was also into football as a childhood sport.

From the onset, it was football or nothing for the middle-class Gravenberch family. Hence, both Danzell and Ryan were glad to accept their destinies in the name of living their mummy and daddy’s dreams.

In the course of seeing him play, you must have asked… who is this guy!. Yes!… We all know he is Dutch.

But judging from his skin colour, you and I know Ryan Gravenberch’s family have their roots NOT from Holland, but somewhere else.

First thing first, he isn’t African. Ryan Gravenberch’s parents have their origin from Suriname, a small country on the northeastern coast of South America.

Despite his roots, the city of Amsterdam (as seen below) would forever remain his real home.

The midfielder was only 8 years old when he began playing with Zeeburgia. It was at Zeeburgia that Ryan got his first taste in competitive football and dared to set his sights on building a career in the sport.

It wasn’t long before the Dutch Football Player followed his older brother — Danzell’s lead — into Ajax academy and began his career still as an 8-year-old.

Right from the onset, Ryan (just like Sven Botman) had a clear picture of what he wanted to achieve at the academy. He did set out to achieve them.

The truth is, the young Technical Dribbler had one of the most speedy rises through the club ranks. 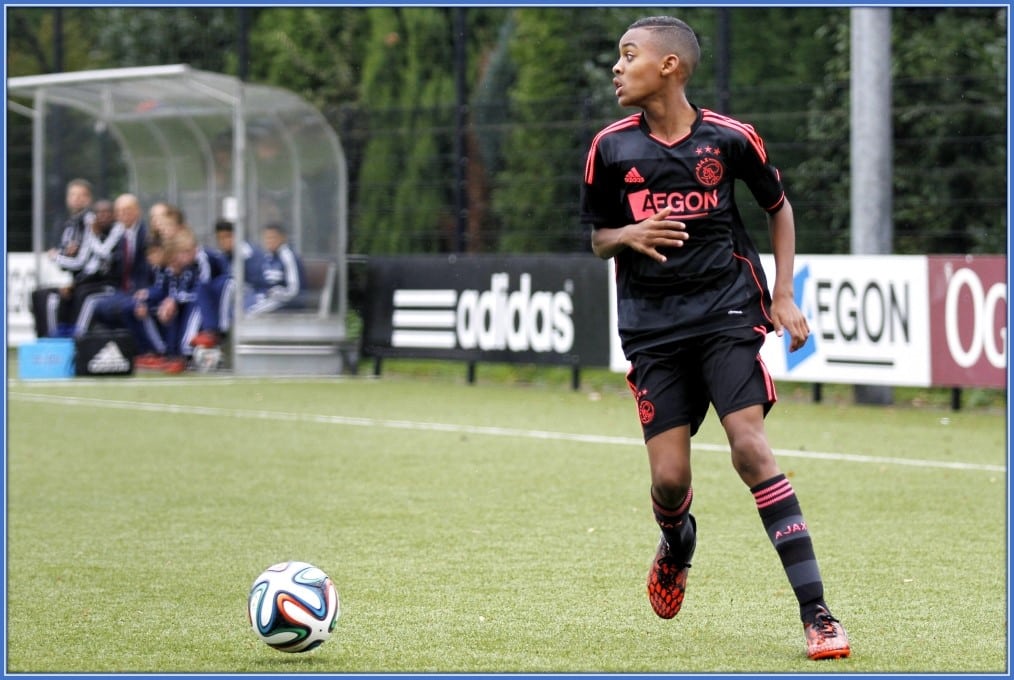 Eight years into his rise at Ajax (precisely 2018), Ryany became one of the best players at De Toekomst.

Interestingly, he was the first youngster to receive “Abdelhak Nouri Trofee” award which recognizes the strongest talent in Ajax academy.

Interestingly, the day of the award also saw the gods of football blessing him further.

Did you know?… that same day, the joy of Ryan Gravenberch’s parents and family members knew no bounds as their very beloved sealed his first professional contract with Ajax. Here is a glimpse of the award and contract signing. 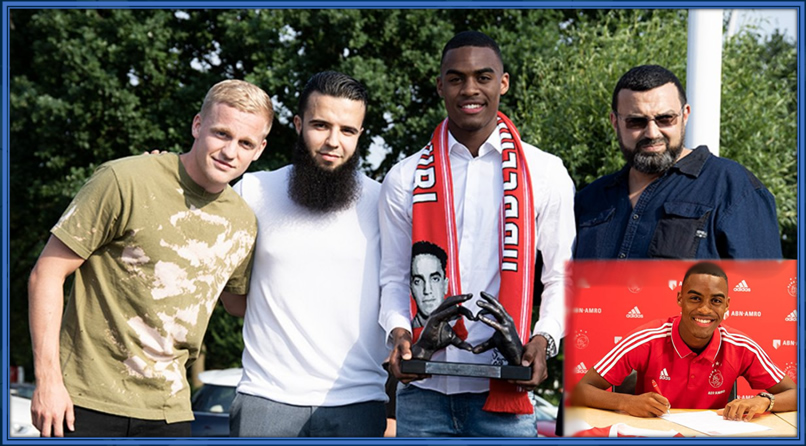 His European football rise is as comparable to both Pedri and Pablo Gavi. The fast-rising midfielder dubbed the new “Paul Pogba” eventually made his senior debut, breaking records after records that were age-related.

For example, he became the youngest debutant in Eredivisie history at 16 years and 130 days. More so, he made it to history books as the youngest goalscorer in the club’s illustrious history.

Fast forward to the time of writing this article on Ryan Gravenberch’s childhood story and biography, the youngster looks forward to having the same impact which former academy talents Frenkie de Jong and Matthijs de Ligt had. 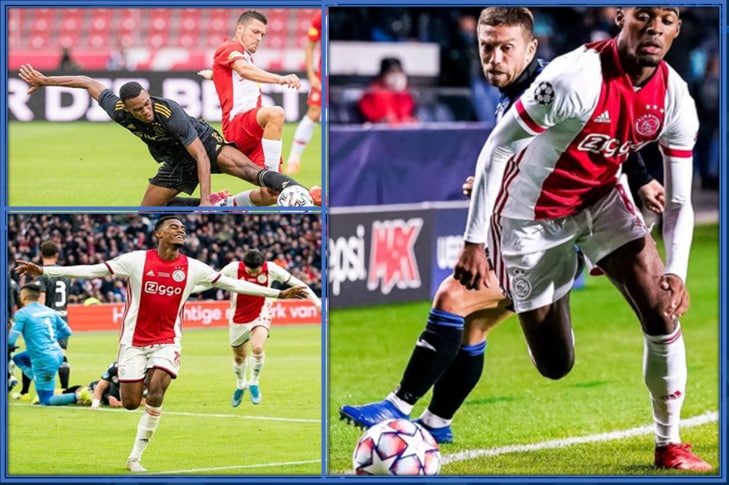 Without a doubt, the world is just about to see another Paul Pogba blossoming his way into a world-class talent — right in front of our very eyes. We have here, a 2020 video on why top clubs beg for Ryan’s signature.


No doubt, everything about him seems Pogba, thou his name is Gravenberch and he is the jewel of Ajax. The rest, as we say, is now history.

Who is Ryan Gravenberch Dating?

As of November 2020, you may not see photos of our boy with a lady. But we know he used to have a girlfriend called Cindy.

Ryan Gravenberch’s father made the disclosure in an interview from 2018 when the youngster was just 16.

Although there has been no update about Cindy, we believe the midfielder is playing his relationship cards close to his heart. It will be a matter of time before complete information about Ryan’s girlfriend surfaces. Stay tuned!

When it comes to sporting greatness, some players just want to keep it in their household. Ryany is big on family and takes them everywhere with him. Here, we’ll bring you facts about members of his brood including his siblings (brothers) and relatives.

Did you know?… it is his mum Aretha who hails from Amsterdam while the player’s dad grew up in Rotterdam. Behold Ryan Gravenberch with his parents as they celebrate his contract signing. 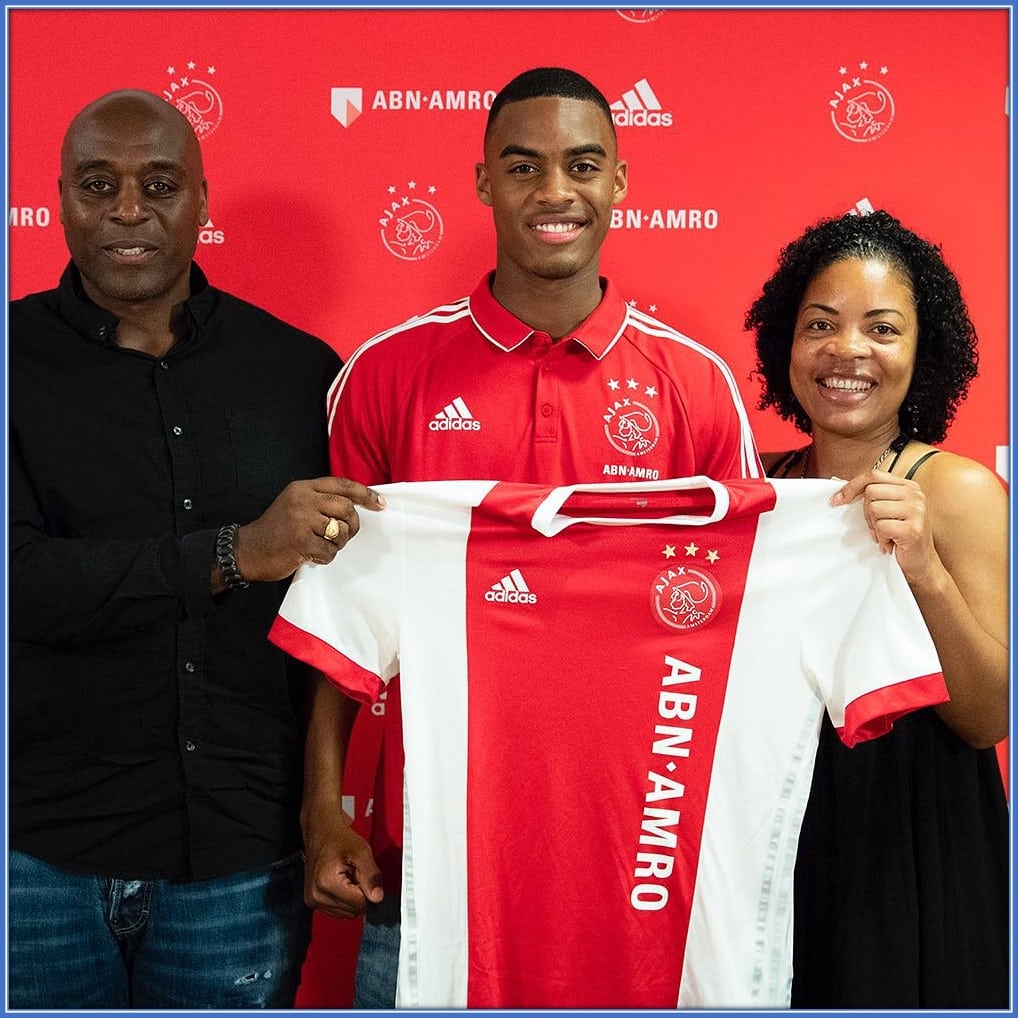 In addition, Ryan Gravenberch Sr has an excellent work history with FA department of one of the business units of ING, in Amsterdam Southeast. He was also on the board of football club Zuidoost United as of 2015.

The midfielder has two siblings who are also connected with football. Ryan’s older brother Danzell Gravenberch is also a professional footballer, albeit with a less illustrious career.

Like Ryan, Danzell is a product of Ajax academy. He currently plies his trade in football with Sparta Rotterdam as a striker.

There is another of Ryan Gravenberch’s brother who is little known and reportedly into football too. From the photo below, it appears he is the youngest of the Gravenberch family. Lastly, there is little information as regards the existence of a sister.

The Internet was generous to give us titbit of information about the midfielder’s immediate household.

However, it has no record of Ryan’s extended family life, particularly as it relates to his paternal and maternal grandparents. Similarly, the soccer genius is yet to reveal his uncles, aunts, cousins, nephews and nieces.

There is a consensus among sportswriters whenever they write about the content of Ryan’s character off-pitch.

They agree that he is calm and almost imperturbable, even in the most stormy of situations. Also, he is a good listener, not big on talking. In addition, the soccer player doesn’t fancy being in the spotlight.

When Ryan is less busy, you can catch him appreciating the lyrical content of Dutch hop scene or binge-watching Netflix.

Added to the list of his interests and hobbies are spending quality time with family and friends, biking and swimming pool relaxing.

Regarding how the midfielder makes and spends his money, he is subsisting pretty well on wages and salaries he gets from playing top-flight football.

Being a young and exciting prospect, he has more than a decade of sponsorship and endorsements to enjoy. His net worth, which is less than a million dollars is set to soar in 2021.

Everything gets better with time, and football is not an exception. For this reason, it wouldn’t be surprising if Ryan suddenly starts commuting to training in an exotic car like Bugatti. Can you figure out Ryan Gravenberch’s car brand? but it looks expensive, right? 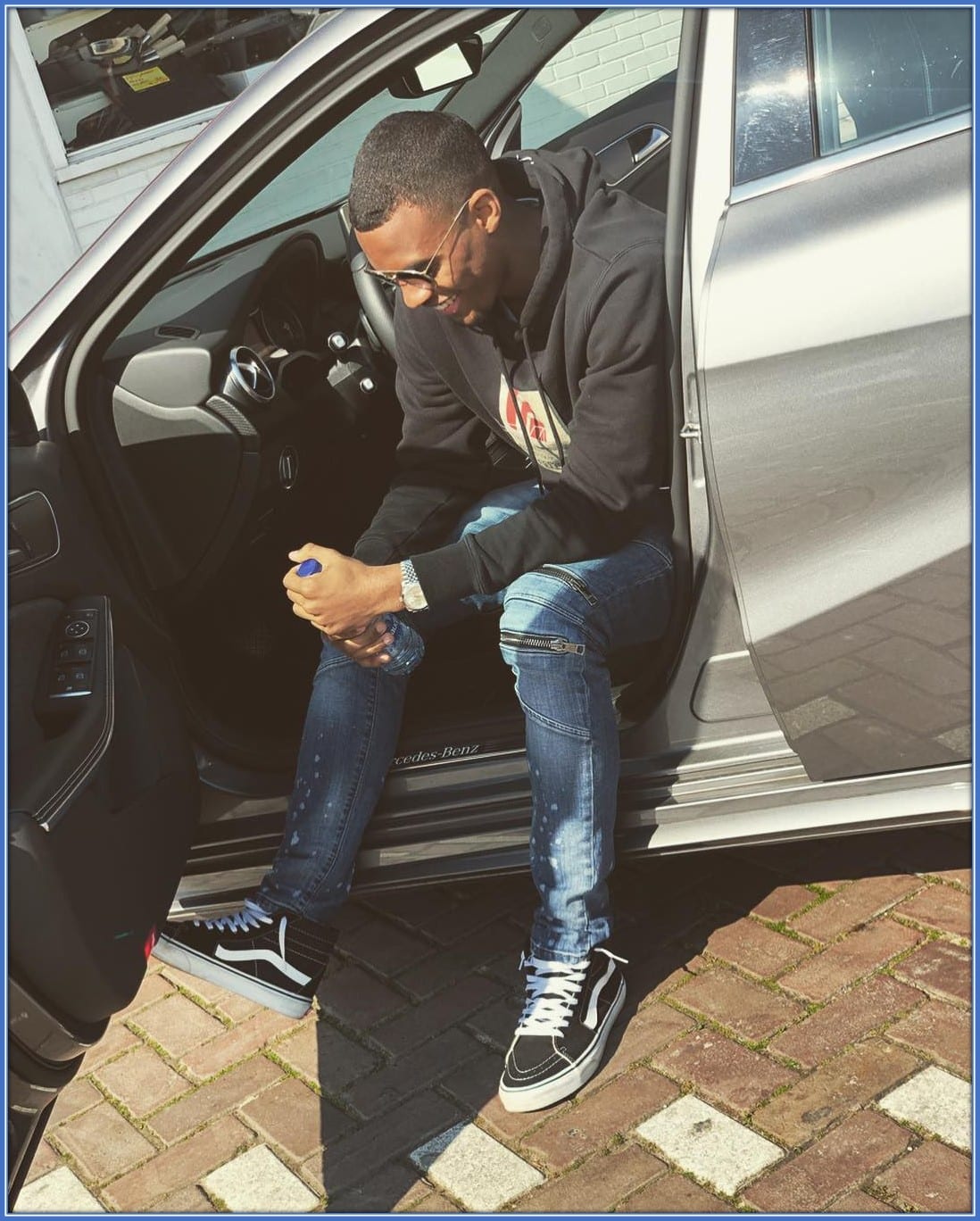 Lastly, fans will express no shock if he buys an expensive house. We have seen and heard of the insane money in football and wonder if there is anything else that might shock us about the sport.

To wrap up this write-up on the midfielder’s childhood and biography, here are little-known or untold truths about him.

We’ve strategically put up an analysis of his earnings as the clock ticks. See for yourself how much he has earned since you came here.

Since you started viewing Ryan Gravenberch’s Bio, this is what he has earned.

The midfielder has an uncool rating of 73 points with a potential of 88. The figures show that Ryan needs to put in a more defensive work-rate if he wants to get to the (88 point) heights of N’Golo Kante.

We are confident that he will deliver, especially as he is still a teenager. Do not forget, Ryan’s name is on Squawka’s reserve list of FIFA 20 wonderkids to sign on Career Mode.

Footballers are big on keeping mum about their disposition to matters of faith. However, it is easy to figure out if they are believers.

With Ryan, we are confident that he is a believer. However, we can’t tell which of the many religions he accords devotion.

Fact #4 – Why is Ryan Called The Contortionist?

It is for reasons relating to his style of play. The midfielder can slip and turn everywhere, thanks to his long legs and pretty handy nature. To tell the truth, he is going to be a great player.

Thanks for reading this informative piece on Ryan Gravenberch’s biography. We hope it has inspired you to believe that no one is too young to achieve greatness. Just like Ryan became the best thing in Ajax academy at just 16 years of age.

It behoves us to commend the midfielder’s parents and family members for their support to his career in words and deeds. Today, they are proud of seeing their breadwinner further uplifting their family lineage of sporting greatness.

At lifebogger, we take pride in delivering childhood stories and biography facts with accuracy and fairness. If you see anything that doesn’t look right, do well to contact us or leave a message below. To get a quick glance of Ryan Gravenberch’s bio, kindly use our table summary.