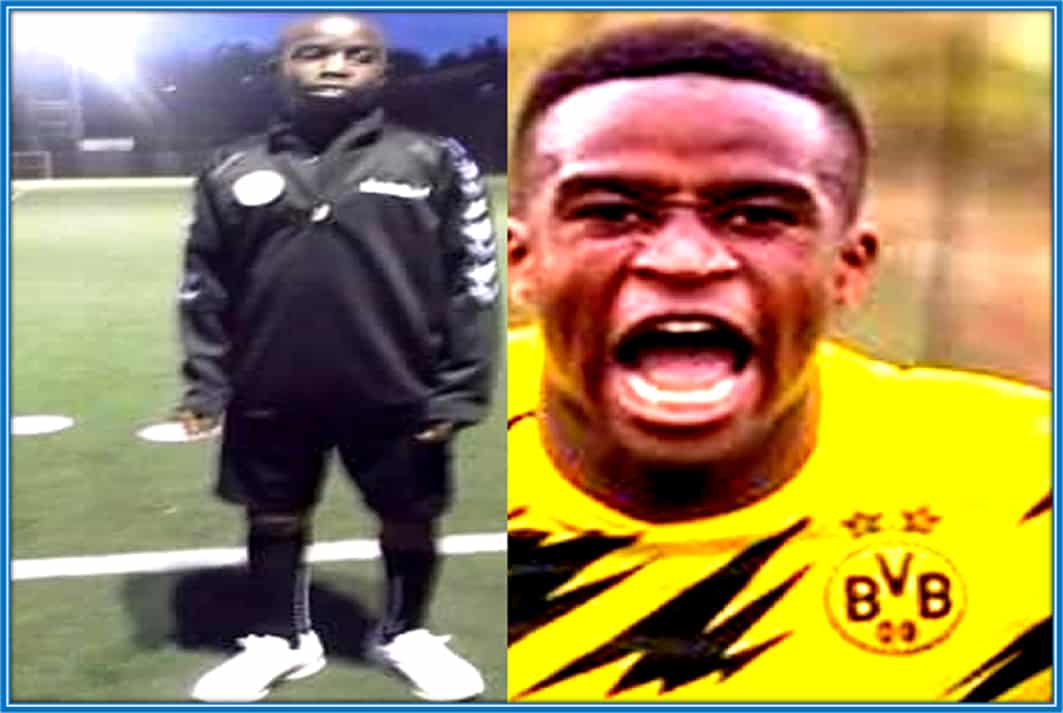 In a nutshell, we give you a presentation of his Life Story from his early days, to when he became famous.

To whet your autobiography appetite, here is his early days to rise gallery — a perfect introduction to our version of Youssoufa Moukoko’s Bio.

As an ardent soccer lover, you probably began hearing his name when the Borussia Dortmund wonderkid shattered goal-scoring records at BVB’s U17 and U19 levels.

Maybe at that time, you began comparing him to C Ronaldo. Despite the accolade, just a few fans know his life history, which is quite engaging. Without further ado, let’s begin.

For Biography beginners, he bears the nickname Koko. Youssoufa Moukoko was born on the 20th day of November 2004 to his mother, Marie Moukoko, and his father, Joseph Moukoko at Yaoundé, the capital of Cameroon.

The African-born German footballer is one among four children of his nuclear family — born of the union between his parents.

Youssoufa Moukoko’s Dad and Mum — Joseph and Marie are NOT from France, but pure natives of the West African metropolis (Yaoundé) which is nicknamed – the city with the seven hills.

The goal-scoring machine spent the first ten years of his life growing up and loving soccer at his birthplace in Yaoundé.

Back in the days, his grandparents, mother and older brother, (Borel) all watched him sprout into a young soccer genius.

While Youssoufa Moukoko’s family members gazed at his prowess, they treasured their hopes of a great future for him in the sport.

We must state here that the household’s breadwinner and father of the house – Joseph has been living in Germany as a citizen since the 1900s. Thank goodness he wasn’t a deadbeat Dad.

Back then, Moukoko’s dad would often send Euros to his mum for family upkeep, a development that helped Moukoko have a middle-class upbringing like most kids in Yaounde.

Although Koko was born in a Central African country, the wonderkid is a German national. Did you know?… his dad, Joseph, registered his birth at the German embassy in Cameroon immediately after he was born.

Notwithstanding, he has Africa written all over his physiognomy and physique because he is 100% from the motherland.

Youssoufa Moukoko’s parents are both natives of Cameroon, and his family root is deep-rooted in the country’s Yaounde fang ethnicity.

By the time the soccer prodigy was 11, his parents had agreed to have him flown over to Germany, where he began playing for FC St. Pauli.

Thus began Moukoko’s journey in career football. Behold a rare photo of the football genius when he arrived at FC St. Pauli.

Landing there, the youngster moved into top gear. He immediately became a standout player for the club’s Under-15 side — scoring 21 goals in 12 games as an 11-year-old!

Observing this unbelievable trend, his Dad, Joseph, pressed a move to Borussia Dortmund, and this feat saw the continuation of his goal-scoring prowess.

The then young kid had barely turned 12 when he began destroying defences and banging goals for fun With BVB’s U-15 team.

As a result, he gained promotion to the club’s U-17s even before he even became a teenager!

His excellent run of goal-scoring form seemed to improve with each promotion, a development which made many people doubt whether he was really 12 years old.

Responding to issues surrounding the teenager’s age, his father, Joseph, issued a statement stressing that:

“My son’s age is right. Immediately after he was born, I registered him at the German consulate in Yaounde. We have a German birth certificate.”

When the Yaounde native moved from the U17s to U19s at the start of the 2019-2020 season, little was he aware he was at the brink of becoming famous.

At that level, he already had the unanimous support of coaches in the yellow and black outfit.

Even the reticent manager Lucien Favre that was famed for agonising the press with unclear statements, became positively eloquent when asked to comment on Moukoko. He, at that time, was a footballer who fans viewed as the hottest among Borussia Dortmund’s next batch of youngsters.

Upon dominating the Under 19 Bundesliga and UEFA Youth League with goals, Koko began training with BVB’s first team in January 2020.

Months later, in November, he made his debut for Dortmund as an 85th-minute substitute for Erling Braut Haaland against Hertha BSC.

With the debut, Moukoko became the youngest player in Bundesliga’s league history. No doubt, his journey in top-flight soccer has just begun, and there are loads of positive headlines lining up for him.

While lifebogger.com would like to urge caution in comparing any player to Lionel Messi, we believe Moukoko is an exception.

Like Andre Onana, he amazingly lives up to his own expectations and doesn’t let praise get to his head or criticism affect him.

Whichever way things tilt for him, the rest, as they say, including his video highlight below, will be history.

Who is Youssoufa Moukoko Girlfriend?

What looks like a piece of friendly advice but is pretty bad? It is telling a teenager who just turned 16 to get a girlfriend.

Who does that right? You, yes you! It is too early to inquire whether Moukoko has a WAG or girlfriend. He is just a kid, for football’s sake. Do you want him to fade into obscurity even before his career starts?

Let’s assume the 16-year-old has a girlfriend. Would you inquire if he has sons or daughters?

Can we all give the lad some breathing space? Thank you, and please check this space for updates when he turns 18.

It is easy for comic lovers to believe the striker was not born of a woman. In fact, some think he arrived on earth from an alien planet like Superman and had an adoptive family.

But we are better informed here. This section brings you more facts about Youssoufa Moukoko’s parents. More so about his siblings and relatives.

We believe you are now familiar with Marie and Joseph. Not biblically but biographically they are Youssoufa Moukoko’s Parents.

As far as we can tell, Marie was 28 years old when she gave birth to the forward. She watched the youngster grow up loving soccer before agreeing with her husband to relocate him to Hamburg.

On the other hand, Youssoufa Moukoko’s Dad, Joseph, is a former footballer. He has lived long in Germany to be eligible for contesting the position of Chancellor in the country.

When Moukoko age was a subject of debate, he wittingly remarked that the teenager is an underachiever, stressing that he did better than him at the same age.

The Cameroonian-born footballer reportedly has four siblings, but we know just one. He is Moukoko’s older brother, Borel. The sibling is also into football and has been playing for the German club Schwarz-Weiß Essen since 2019.

Away from the Cameroonian’s immediate family life, there aren’t records of his ancestry. Like our esteemed readers, we are curious to find out whether Koko’s maternal and paternal grandparents were soccer geniuses.

Do his uncles and aunts love the sport? Then he must have a cousin making waves somewhere, right? Maybe yes or no. There are too many curiosities we want to satisfy, even though we are not in a hurry to identify his nephews and nieces yet.

Who is he that strikes people as down-to-earth and purposeful, with no-nonsense in his head? Yes, you guessed right, Moukoko!

He is a free-spirited individual who does everything with love, including posing for photos.

Although BVB has tried much to shield him from much media attention, his strength of character and emotional intelligence has spoken well of him than a hundred interviews would.

The youngster enjoys riding in speed boats and swimming. Added to the list of his hobbies is spending quality time with families and friends. Isn’t he an amazing young talent?

Clocking 16 didn’t only make Koko eligible to make his league debut. The new age removed several restrictions on his lifestyle.

Thus, he can now get a driver’s license for small cars and motorbikes — including driving around the city until midnight. He can also cast his vote in local elections and open an account at the bank.

Why is a bank account important? He has a net worth of 500 Thousand Euros and needs to keep tabs of his fast-rising financial fortune.

Moukoko has his contract with Nike to thank for his huge financial fortunes because it makes up for deficiencies arising from the 250 Thousand Euro which BVB pays him as of November 2020.

There are 99% chances that Moukoko doesn’t have landed properties in his names. Neither does he have cars and houses yet.

Obviously, he must have heeded to the advice given to him by fellow French-speaking Pierre-Emerick Aubameyang, whom he met back then at Dortmund.

To wrap up this engaging piece of Koko’s biography, here are little-known or Untold facts about him.

Are you aware?… Where his family comes from (Cameroon), the average citizen would need to work for 29 years and 8 months to make Moukoko’s (November 2020) yearly wages at Dortmund.

Since you started viewing Youssoufa Moukoko‘s Bio, this is what he has earned.

Often, opposing fans get frustrated with the way he scores lots of goals against them. In an Under-19 youth match against Schalke, fans threw racist chants all in the name of demoralising the youngster.

Thankfully, Moukoko responded by scoring a hat-trick which silenced them, and Schalke did apologize after the match.

It beats our imagination how someone whose parents bear Christian names practices Islam. Perhaps there is no cause for a surprise since his first name Youssoufa is a variant of Yusuf, right?

FIFA is yet to rate Youssoufa Moukoko officially. What he has is a customised rating of 72 points and guess what?… his potential rating of 92 is two points above Samuel Etoo’s highest FIFA rating.

We hope FIFA keeps the potential and boosts the overall, which many deem fitting for the precocious lad.

Thanks for reading this piece on Youssoufa Moukoko’s biography and childhood story. We hope it has inspired you to believe that greatness is not age-specific, just like Moukoko’s run of form has proven.

The truth is, people like legendary Rigobert Song would be glad to him play for the Indomitable Lions — and live his national dreams from where he left off.

Furthermore, it behoves us to now to commend Youssoufa Moukoko’s parents for not just defending him against age critics and urging him to perform better.

Defending his age is normal, but responding to racism with hat-trick shows he is a no-nonsense footballer.

At Lifebogger, we take pride in delivering childhood stories and biography facts with accuracy and fairness.

If you notice anything that doesn’t look right, do well to contact us. Otherwise, tell us what you think of him in the comment section. Our Wiki Table will help you get a summary of Youssoufa Moukoko’s Bio.