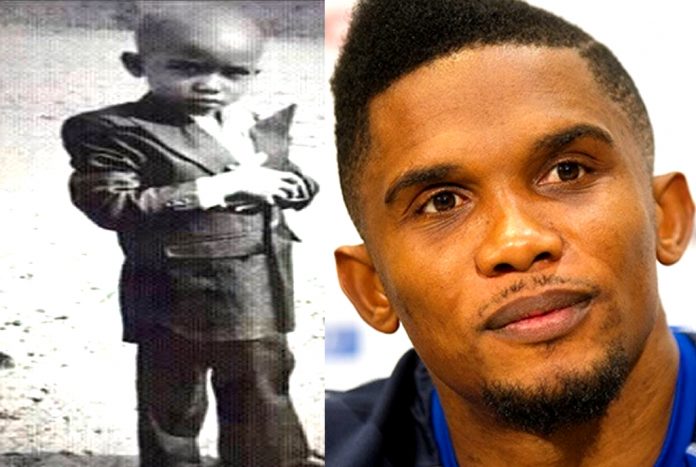 LifeBogger presents the Full Story of a Football Legend best known by the nickname “Sammy“. Our Samuel Eto’o Childhood Story Plus Untold Biography Facts brings you a full account of notable events from his childhood time to date.

Yes, everyone knows of his goalscoring form, but only a few consider our Samuel Eto’o Bio, which is quite interesting. Now without further ado, let’s Begin.

For Biography starters, Samuel Eto’o Fils was born on the 10th day of March 1981 in Douala, Cameroon. He was born to his mother, Christine Eto’o (a fishmonger), and to his father, David Eto’o (an accountant). Below are the lovely parents of Samuel Eto’o.

Growing up as a kid, Eto’o, who was a lover of football, had ambitions of becoming one of Africa’s best. An ambition that saw him begin his youth club career at the Kadji Sports Academy in Douala in, Cameroon.

Eto’o committed the first four years of his life to nurture his quest of getting the continental and international recognition he craved for.

By 1996, Eto’o moved to France to try out for a French soccer club. Sadly, he was rejected. Consequently, he had to live as an illegal immigrant due to a lack of proper documentation and identification. 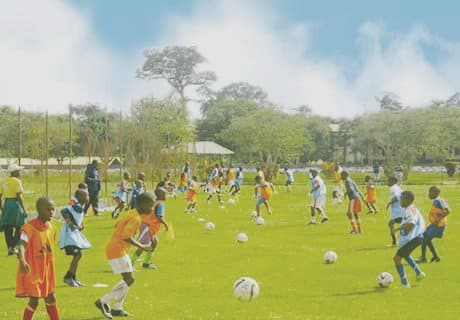 Despite his travails, Eto’o still stuck to his dreams and aspirations even when the future seemed bleak for his football.

It was during one of those practices that Eto’o got spotted by scouts from Real Madrid when he was having fun playing football in France city of Le Havre in the year 1997.

Although Eto’o started off by playing for Team B of Real Madrid in 1997, his stay at the youth team was short-lived as it suffered relegation to the third tier of Spanish football.

Consequently, Real Madrid loaned Samuel Eto’o to a number of clubs, including Leganes, Espanyol and Mallorca, who discovered great prospects in the African Immigrant.

It wasn’t long before Mallorca bought Eto’o on a permanent deal in the year 2000 for a club-record fee of £4.4 Million. 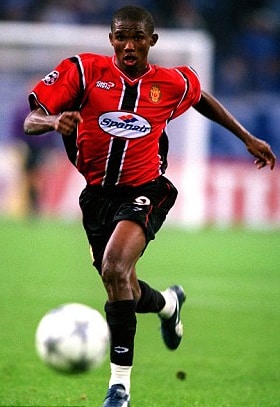 After the purchase, Eto’o began an adventurous and exciting career. Just after scoring 11 goals, he earned himself encomiums from pundits and media alike.

Samuel Eto’o exploits at Mallorca caught the attention of Spanish giants Barcelona in the year 2003.

In the same year, Eto’o signed up for Barcelona, a move which marked the beginning of a big rise for Eto’o, who was gradually becoming a face for Africa in the international sports scene. 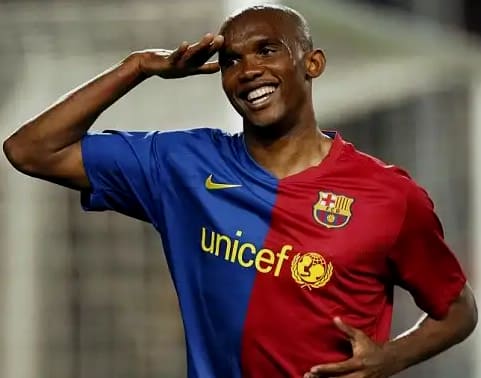 In the same year of his move, Eto’o was not only awarded African Player of the year for the year but immensely contributed to the ushering of Barcelona into a golden era.

More importantly, he became a source of motivation for Cameroonian strikers. For example, the likes of Karl Toko Ekambi, Vincent Aboubakar and Eric Maxim Choupo-Moting – men who pushed the national team to AFCON glory following his retirement. 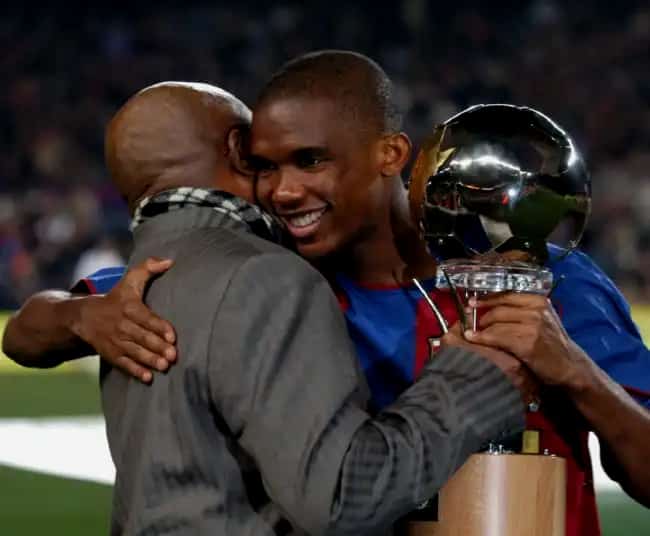 The common saying that behind every successful man is a woman is not farfetched in narrating the story of Samuel Eto’o as he has a heartthrob in the person of Georgette Tra Lou, pictured below.

She not only supports his career and movement but enjoys sharing in his adventurous lifestyle.

Samuel Eto’o and Georgette Tra Lou have been childhood sweethearts, and best of friends up until their friendship culminated into Marriage.

Georgette and Samuel Eto’o got married traditionally in 2004 and after a decade had a grand white wedding in Milan.

Georgette is the mother of four out of Samuel’s five children, namely; Maelle, Etienne, Sienna and Lynn.

Samuel Eto’o ‘s last child Annie (pictured below with her mother), was born by Eto’o lover, Barranca, an Italian hairdresser. 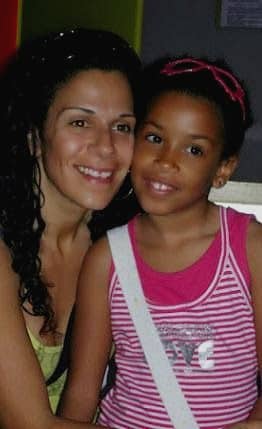 It would be recalled that sometime in 2014, Jose Mourinho was poised with the problem of ascertaining Eto’s real age. 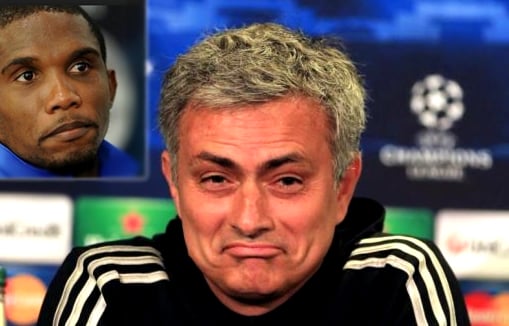 It became a problem after Jose Mourinho bared out his mind during a press briefing as he commented thus:

While speculations rages and opinions differ, there is no denying the fact that Eto’s real age is best known to himself.

He replied to Jose Mourinho by making a mockery of the speculations. He first acted as an old man taking snuff before his goal celebration which portrayed him as an old man.

Samuel Eto’o owns a number of business ventures both within and outside Africa. Unlike many of his colleagues who often amass wealth and invest abroad, Samuel has done a great deal in investing in Africa.

Samuel Eto’o owns an international fashion line which produces shirts, caps and sneakers targeted at both the local and international markets with millions swimming in investments and profits. 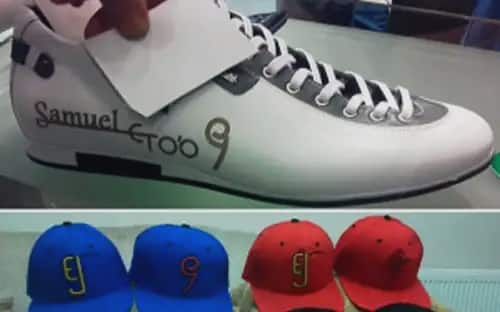 Aside from the fashion brand, Eto’o has a commercial interest in the communications Industry of Africa, owning one of the few successful communications companies in Cameroon, which is named Eto’o Telecoms.

In 2017, Eto’o opened a Chinese restaurant in the suburbs of Chicago, a restaurant that depicted his love and interest in food as well as his business sense. 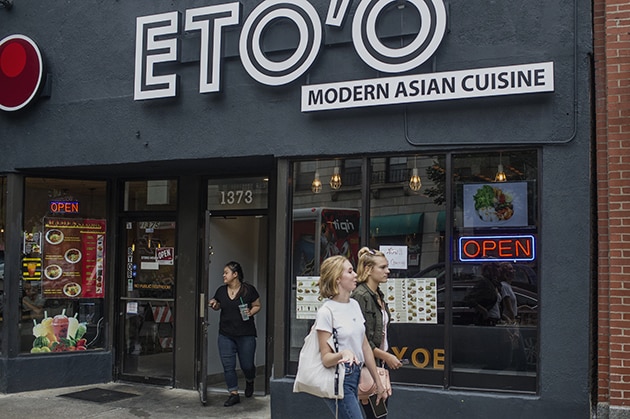 Samuel Eto’o background is key to his growth. Watching his family sink from reliance on his Accountant father to being fed by little proceeds made from sales of fish (by his mother) has helped the football legend grow empathy for the unprivileged and underprivileged in his community, country, and continent.

His goal is to promote love for the sport while imbibing the spirit of sportsmanship in kids and Youths alike.

In addition, Eto’o has produced nine graphics novels/comic books based on his life and football story. The bulk of his audience being children and teenagers whom he intends to motivate by building up their dreams in football and the likes.

It is no longer news that successful African players are often faced with racial discrimination in their countries of play.

Samuel Eto’o is not an exception to the social anomaly. This is because he has battled racial discrimination almost all throughout his football career. Starting from Spain down to Russia to mention a few.

In 2006, Samuel Eto’o was racially discriminated against during a match against Real Zaragoza in Spain.

He has been numerously hailed a monkey. This is a racist remark. It is no different to the treatment meted on his Nigerian counterpart, Osaze Odemwingie in Russia.

Having had enough, Eto’o, in an interview with CNN, complained tirelessly about racial discrimination. Especially the one he faced in most countries he has played for by remarking that.

“People insist on racism in Russia but the phenomenon is global. I do not say that I’ve never heard of racist insults here: it would be wrong.”

Samuel Eto’o is a traveller, an astute adventurer. Thanks to his football career which saw him play in Spain, England, Russia, Qatar, Turkey, Italy, to mention a few. In total, Samuel Eto’o played football at eleven clubs in six countries!.

Granting an interview to Courier Russia in 2012, Eto’o revealed what he admires about two specific cities he loves most.

“I am a lover of New York and Moscow made me think because it never sleeps. At two o’clock in the morning, there will always be a place open to eat or drink. Moscow offers this possibility twenty-four hours on twenty-four. This city is changing all the time. The last time I went on vacation and they were raising a building where I lived.

A month and a half later, everything was almost finished. Like New York, people never stop. I like this mentality there.”

A major personality trait which Eto’o possess is his cheerfulness and sometimes playful demeanour, which he exhibits during press conferences.

The African most decorated player of all time also exhibits a good display of strong character both on the pitch and off the pitch. 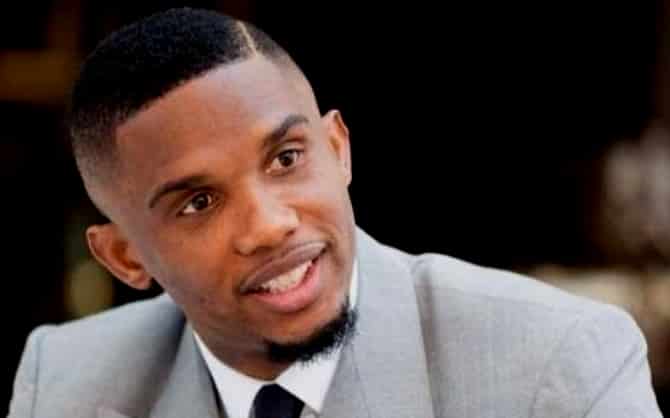 To cap it all, he has an extreme love for his family and goes to lengths to keep them close.

Thanks for reading our Samuel Eto’o Childhood Story, plus untold biography facts. At LifeBogger, we strive for accuracy and fairness.

Hi! I have been trying to find which ethnic group in Cameroon he and his wife are from? Any leads?

Fantastic stories I had been looking for for a long time. We all gain when we learn the diversity of cultural and geographical backgrounds of the the people who entertain us.