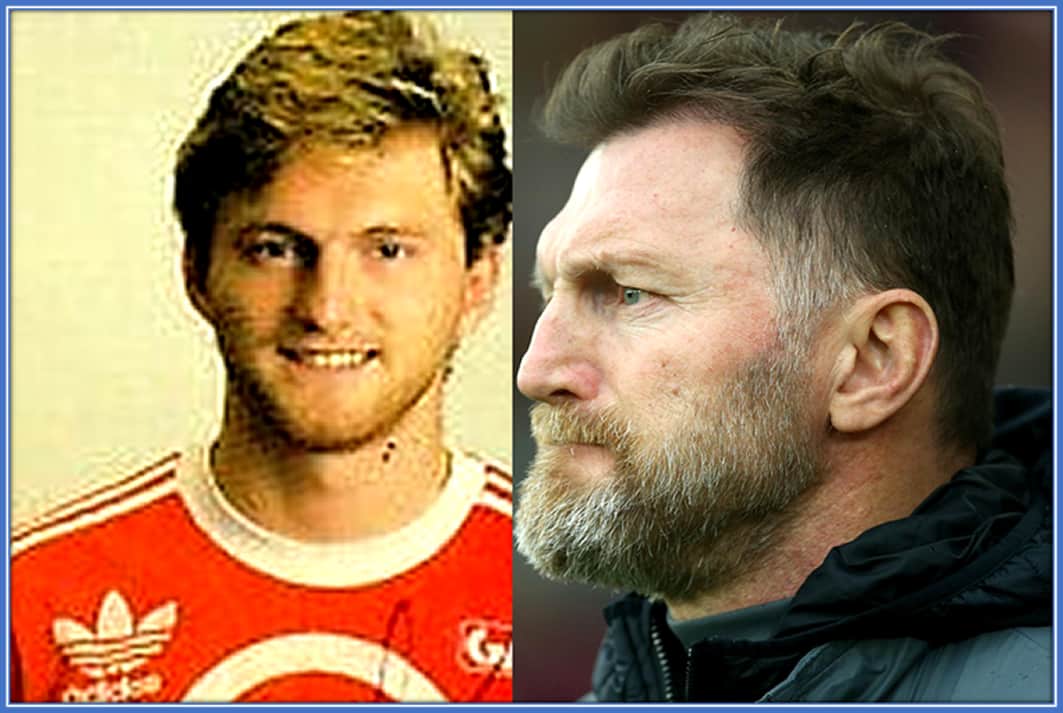 In a nutshell, this article gives you the Full History of Ralph Hasenhuttl. We begin with the football manager’s childhood years right to the moment he became famous in his managerial career.

To give you a taste of the engaging nature of the bio, here is a pictorial summary of his life and career progression.

Yes, everyone knows of his victory against Liverpool that made Klopp angry with his 11. However, not many have read his biography, which is quite engaging. Without further ado, let’s begin.

For his Biography beginners, he doesn’t like the nickname “Klopp of the alps.” Ralph Hasenhuttl was born on the 9th day of August 1967 at the city of Graz in Austria.

He was born to his mother, Ingrid, and to his father, Gilbert.

The son of Ingrid and Gilbert is Austrian. Also, Research carried out to determine his family origins show that he hails from the German-speaking area of Austria called Graz (his birth city).

As a kid, the Graz native practised many sports and dancing. In fact, he sometimes danced with his sister.

Interestingly, Hasenhuttl’s parents thought he was lazy because he initially didn’t want to commit to any of his childhood interests.

The then youngster’s non-committal made his parents worried. Therefore, they often asked him questions about his plans for the future.

Actually, money wasn’t a problem for Hasenhuttl parents who lived a middle-class lifestyle. They only wanted to ensure that he becomes a successful individual.

Fortunately, the multi-sport boy committed to soccer. In fact, he became a part of the local club GAK before the age of 10.

It was with the team that he rose through the ranks and made his first-team debut in the 1985–86 season. Subsequently, Hasenhuttl had a productive spell at FK Austria Wien.

He went on to ply his trade as a forward Austria Salzburg before playing for Belgian sides, Mechelen and Lierse.

Finally, he returned to German to have stints with FC Koln, Greuther Fürth and Bayern Munich II before hanging his boots.

Like most managers, Hasenhuttl began his coaching career from the bottom. He started with a 3 Bundesliga outfit Unterhaching as a youth manager.

Subsequently, he became an assistant coach and finally head coach with the Unterhaching which he had little success with.

In the ensuing years, the young coach did his best to make a name for himself. First, with VfR Aalen which he helped gain promotion to 2 Bundesliga. This club once has Nico Schlotterbeck in its academy. It wasn’t long before Hasenhuttl was down with Hantavirus.

Fortunately, he recovered in three weeks and was back to promoting ways. Speak of which, are you aware that he led his next team FC Ingolstadt 04, to achieve promotion to Bundesliga for the very first time? Now you know.

At the peak of his managerial career, the hardworking coach joined newly-promoted RB Leipzig. Interestingly, he saw them to a 2nd-place finish in their top-flight debut season.

Upon spending another season with the German side, Hasenhuttl left in 2018 to answer Southampton’s call.

Hasenhuttl has been faring impressively well ever since he arrived on the South Coast to succeed Mark Hughes.

Although his team suffered a historic 9-0 home loss to Leicester in October 2019, he steadily restored their confidence and steered them to what pundits describe as the Premier League’s biggest comeback.

His efforts at keeping The Saints in the Premier League have seen him record impressive wins. The latest of such wins was the Saints’ unbelievable 1-0 victory over Liverpool at St Mary’s.

Consequently, the hardworking coach went emotional after the match because beating Liverpool was a dream come true. He is no doubt a blessing to the Saints and will definitely lead them to greater heights.

Who is Ralph Hasenhuttl Wife?

Behind every superb manager is a life partner. As you might have figured, Hasenhuttl is not lacking in that department.

His wife’s name is Sandra, and they have been couples for many years. Sandra must have been his girlfriend before she agreed to be his wife.

Furthermore, she is often by the side of the manager when he is not on official duty. Last but not least, their marriage is blessed with two children.

They are Patrick and Philip. Patrick is a bit popular because he plays soccer for German 3. Liga side – SpVgg Unterhaching as a forward.

Skilled managers are not made on Mars. They have families with traceable lineage. We bring you facts about Ralph Hasenhuttl’s parents. We will also make details of his siblings and relatives available here.

As earlier mentioned, the coach’s dad name is Gilbert. Are you aware that he was a dancer? In addition, Gilbert is an accomplished painter.

He is in his 80s at the time of writing this biography. Notwithstanding, he still looks fit and ready to live for more decades.

On the other hand, the manager’s mom’s name is Ingrid. Like her husband, she was a dancer.

Besides dancing, Ingrid has interests in baking and fashion. Hasenhuttl credits her for making the best cookies in his hometown.

Away from his parents, there is another person whom the coach is close to. It is his little known sister whom he grew up with. Asides from her, there has been no other mention of other siblings.

Are you looking for the manager’s grandparents? So are we. Do you desire to have records of his uncles, aunts and cousins? Welcome to the club. Hopefully, his nephew and nieces will identify with him someday. We hope so.

Who is the manager outside soccer? Is he really the ‘Alpine Klopp’ who admits that he is a little crazy? Sit tight as unravel facts about his personality.

To begin with, Hasenhuttl is not literally a bit crazy. He is more of a bit weird. By weird, we mean he doesn’t fit into your regular picture of a coach.

He is admirably calm, disciplined and prefers milk to wine. Hasenhuttl loves playing the piano, an activity that goes well with his calm nature.

Other times he plays tennis, engages in skiing, ice hockey and even scaling canyon walls.

You must be here to get info about how the manager makes and spends his money. Let’s start with his earnings.

He takes home £6 million every year and ranks among one of the top 10 best-paid managers in the Premier League.

We are all aware of the lavish lifestyle that comes with soccer management. Having exotic cars and living in magnificent houses are the least of his worries.

In fact, there are provisions for all that he will ever need (including vacations) to ensure that he does his job well.

To wrap up this piece on the manager’s childhood story and biography, here are facts that you don’t know about him.

Since viewing Ralph Hasenhuttl Bio, this is what he has earned with Southampton.

When Jurgen Klopp was manager of Dortmund, he had a pre-season tour at Austria. It was a time that Hasenhuttl had just recently been sacked from the first-ever club he managed Unterhaching.

Thus, he had time to spare and rode a mountain bike to observe Dortmund’s training session. Nobody knew who he was because he wore a helmet.

Few people are aware of the fact that Hasenhuttl and Liverpool’s manager were born seven weeks apart. Also, they embarked on their coaching paths at the same time.

What’s more, Hasenhuttl admires the German. However, he doesn’t enjoy being compared to him. He is special and incomparable in his own little way.

Amid his rise to becoming a brilliant coach, Hasenhuttl was also instrumental to the rise of some youngsters. In fact, he made stars out of Timo Werner, Naby Keita, and Emil Forsberg.

The manager has made no sign or gesture that reveals his position on matters of faith. However, there are indicators that he is Christian.

Take his first name (Ralph) for example, and that of his dad (Gilbert). Have you forgotten those of his sons so soon? Scroll up to confirm.

Thanks for reading this informative piece on Ralph Hasenhuttl’s childhood story and biography. A man whose tactical abilities were inspired by Ralf Rangnick.

We hope that the story of how he ‘came to revolutionise’ and shook up Saints has inspired you to believe that we are what we repeatedly do.

Just like Hasenhuttl had been revolutionising other teams before he arrived in Southampton.

It behoves us now to commend the manager’s parents for their support to his football and managerial career in words and deeds.