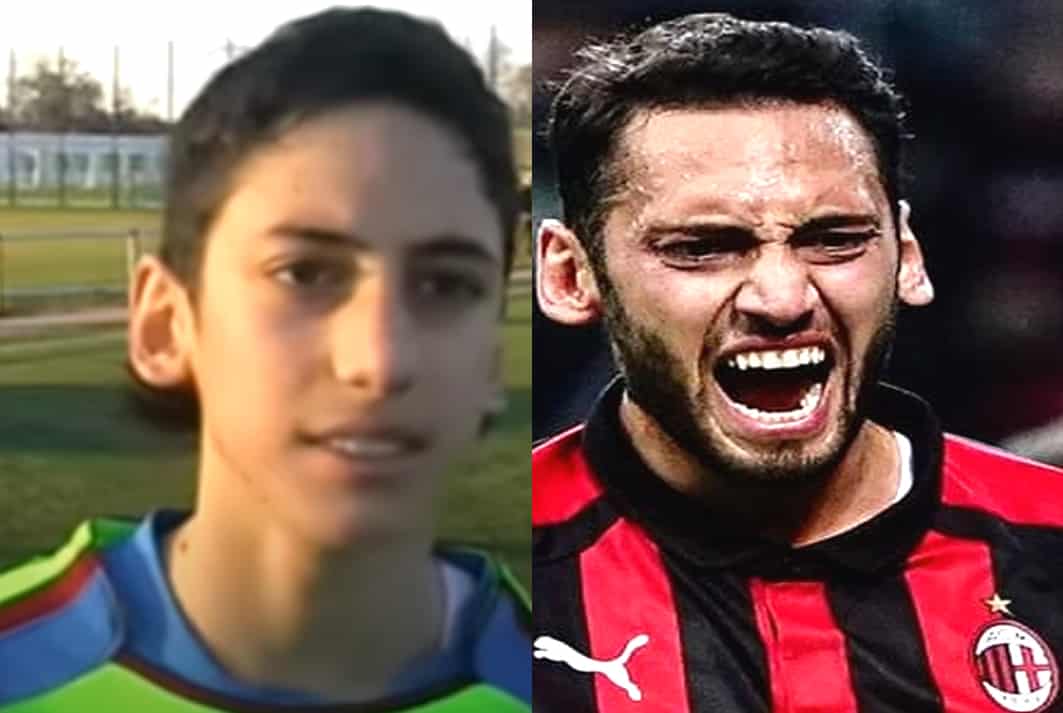 In simple terms, we present to you the midfielder’s career journey, from his boyhood days, to when he became famous.

To whet your autobiography appetite, here is his childhood to adult gallery — a perfect summary of Hakan Calhanoglu Bio.

Yes, you and I know that the Turkish playmaker is on his way to becoming a world-class footballer like his teammate Zlatan Ibrahimovic.

However, many fans do not know about the hurdles he has overcome to achieve this feat in his Life Story. Hence, we’ve prepared his Bio just for you and without further ado, let’s begin.

For Biography starters, Hakan Calhanoglu was born on the 8th day of February 1994. He came into this world through his father, Huseyin Calhanoglu and mother, Naime Calhanoglu, in Mannheim, Germany.

Do you know?… The free-kick genius is the eldest of two children born of the union between his parents pictured here.

From the on-set, the young Turk was raised with his kid brother, Muhammed, in the streets of Mannheim.

There, they cultivated the habit of playing street soccer with other kids. Because his father had a profound love for football, he never objected to the constant evening routine of his sons with their peers.

Being born in Germany does not mean that the Turk forgot about the existence of his fatherland. As an established player, Calhanoglu has paid many visits to his place of Origin.

What’s more?… He is a native of the Konursu village of Bayburt Province in Turkey. As of 2010, his hometown had an estimated population of about 1,573 people.

First and foremost, the members of his household were not the type that one could describe as super-rich.

However, they were financially stable and even graced Hakan’s childhood with the latest toy collections of his time.

Thankfully, the young lad’s parents had a good financial education. Hence, they could manage their funds in the most economical way. 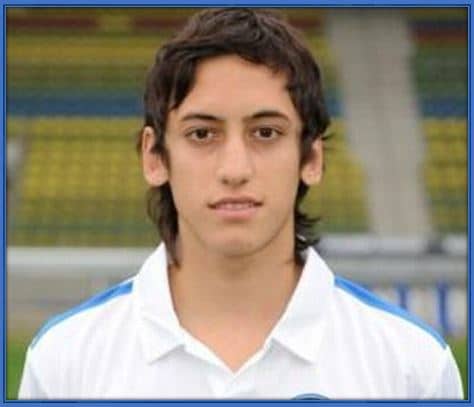 When the Turk clocked 7, his father had him enrol at a local institute in their vicinity. Back then, Calhanoglu was an innocent kid who only knew how to kick the ball in any direction.

But his parents had high hopes that their son would make a resounding improvement as he joins Waldhof Mannheim academy.

At first, the midfielder could not easily meet up to the directives of his trainers. However, he often put his filial duty to his parents first before thinking of his discomfort.

Hence, Calhanoglu strived hard to improve on his potential and make his family proud.

After eight years of featuring for Waldhof, the set-piece taker was scouted by Karsruher SC who took him into their youth team. There he started to gain traction in soccer.

At that same period, Calhanoglu who looked up to Mesut Ozil was called up to feature for his home country on different occasions.

With his parents on the lookout for more excellent achievements, the long-shot taker moved to Hamburger SV in 2013. His time with the German club was brief.

However, it was at Hamburger that the Turkish player dared to exhibit Cristiano Ronaldo in taking free-kicks. of course, he was so good at taking distant set-piece.

After his move to Bayer Leverkusen in 2014, the 20-years-old saw himself growing beyond the dreams of his father.

Interestingly, he ensured that the €14.5 million invested in acquiring him didn’t go to waste. Hence, he began scoring goals and making so many assists.

Do you know?… The talented playmaker held on to a better opportunity of joining AC Milan in 2017.

He signed a four-year contract worth €24 million with the Italian club — a feat which made his mother brag about him consistently.

Being given jersey number 10 made many fans expect extraordinary performance from the Turk. Sadly, the first son of the Calhanoglu family did not meet up to supporters’ surmise.

He was inconsistent on the pitch and worked hard to improve on his lacking capabilities.

In no distant time, the free-kick genius made a meteoric improvement, which got many analysts talking about him.

Guess what?… His name made history as he provided an assist for Rafael Leao, who scored the fastest goal in Serie A on 21st December 2020.

More so, the goal which was netted at precisely 6.2 seconds on the clock became the quickest goal ever scored in Europe’s top five leagues.

As I write this Bio, many clubs are on the hunt for his signature. However, we suspect that Juventus may end up signing Hakan Calhanoglu in 2021.

Perhaps the free-kick genius might not extend his contract with AC Milan if they fail to increase his annual salary to €7 million. The rest, as they say, is history.

When it comes to the matters of the heart, the set-piece taker has taken a farther step than his compatriot, Cengiz Under.

As a matter of fact, Hakan married his childhood girlfriend, Sinem Gundogdu, in Mannheim in 2017. 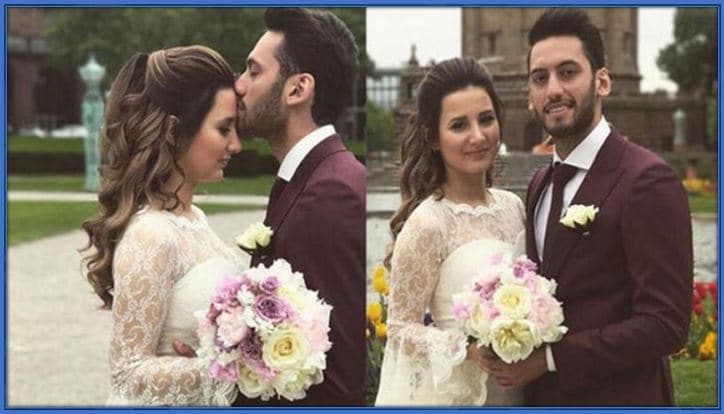 However, their love story did not go as smoothly as those in a fairy tale. Just a few months after his wedding, the relationship of Calhanoglu fractured because his wife accused him of flirting with another woman.

Hence, he was on a brink of divorcing his long-time girlfriend turned wife.

Thankfully, the couples reconciled in 2018 and decided to give their marriage a new dawn. Hence, their union led to the birth of a beautiful daughter named, Liya.

As I write this Bio, the father of Liya who is also Ibrahimovic’s buddy is expecting his second-born child.

“Another little miracle is coming to our family. We are happy that our Liya will soon become a sister to our unborn child. Come, healthy baby.”

Many fans have likened his humble personality to that of Caglar Soyuncu. Of course, he is gentle, honest and instinctive.

Apparently, there are times when Calhanoglu indulges in some child’s-play just to relieve stress and catch up lost time with friends.

The midfielder is also endowed with great musical talent. When his friends have got a birthday or two to celebrate, Hakan is always the man that fills the show with liveliness.

Certainly, he would have made a great DJ if soccer never worked out for him.

While featuring for AC Milan, his annual salary has soared up to an estimated sum of €2.5 million (2021 Stats). As I write this Bio, the boy who grew up in Mannheim lives a luxurious lifestyle.

With his earnings, he has bought so many flashy cars and a beautiful house. He even travels with his family on an expensive private jet.

Research shows that Hakan Calhanoglu has amassed an estimated Net Worth of €9.9 million as of 2021.

Behind his career success, there are a few persons whose unwavering faith has given him the gut to work harder.

They celebrate with him whenever he excels and encourages him when things go wrong. Behold an informative section about his family members.

Thanks to his mom (Naime Calhanoglu), the midfielder has grown up with a great sense of morality.

There won’t be enough words to describe the excellence of Mrs Naime in raising her sons.

All we know is that she was an educated and caring mother who put her children’s welfare first before her comfort.

The pioneer of Hakan’s interest in sport is his dad, Huseyin Calhanoglu. He was a non-league soccer player whose passion for sports never died, even in his old age.

After his retirement, Mr Huseyin went on to coach many children into building a great careers in football.

What’s more?… Hakan’s father is the founder of Calhanoglu football centre (a sports institute in Mannheim).

Being the first son of his family means that the German-bred player would have to set a good example for his brother, Muhammed Calhanoglu.

Of course, he did, and today, his younger sibling has taken the same path as him and his father.

Muhammed is a midfielder who had his youth career at the same academy (Waldhof and Karlsruher SC) as his big bro.

Sadly, he has not established himself in the upper echelons of international football.

As of the year 2021, two of Hakan’s cousins, Turan and Kerim, are featuring Hoffenheim U19 and FC Schalke 04, respectively.

Amongst them, Turan Calhanoglu has got the goal-scoring ability in his blood. As I write this Bio, there has been no information about his grandparents.

To wrap up our Distant Shooter’s Life Story, here are a few facts about him that would help you get a complete understanding of his Biography.

Before his deal came to a close at Bayer Leverkusen, FIFA banned Calhanoglu for four months because of a breach of contract.

Having received €100,000 from Turkish club Trabzonspor, the Distance Shooter ended up extending his contract with Karlsruhe in 2011.

Hence, FIFA had to step into the picture of the misunderstanding and had him refund the €100,000 he received from Trabzonspor.

It was a difficult period for the set-piece taker, but his mother and dad helped him bounce back to his feet again.

One of the most dangerous scenarios encountered by Hakan, as revealed by his father in 2014, was tagged the Crazy Gun Story. It all happened after Turkey lost a World Cup qualifying match to the Netherlands in October 2013.

Back then, Hakan and Omer Toprak were in their hotel when their fellow teammate, Gokhan Tore, and an unknown armed friend threatened both of them at gunpoint.

Tore masterminded such heinous action because his ex-girlfriend was dating Toprak’s friend. Thankfully, the entire ordeal ended with no casualties.

Research shows that an average Turkish citizen will have to work for at least 5 years to earn what Hakan receives in a month.

Since you started viewing Hakan Calhanoglu’s Bio, this is what he has earned.

Like his fellow countryman, Cenk Tosun, Hakan is a devoted Muslim. In fact, he is one of the 4.4 million people who practise Islam in Germany.

From his childhood days, his mother has often taught him about the laws and edicts of his Muslim faith. In 2015, Calhanoglu, alongside his father and brother, visited Kaaba in Mecca.

No doubts his potential has superseded that of his compatriot, Arda Turan.

Wielding a lot of skills in his arsenal, the German-born player has established himself as a weapon that many clubs would need in their midfield.

To improve his ratings, he would have to work on his ability to dominate the ball on the air. 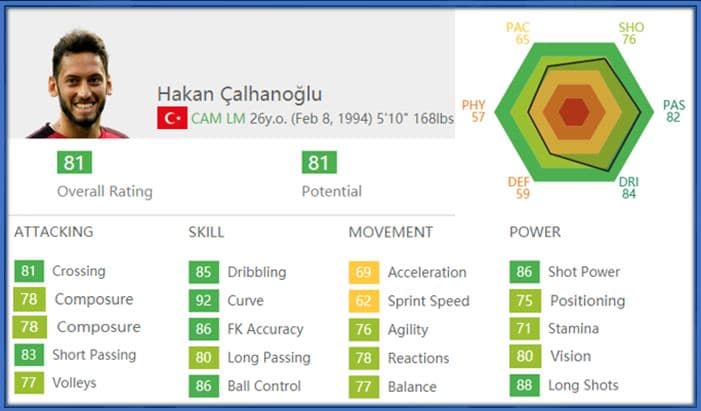 We present you a summary of Hakan Calhanoglu Life Story in this wiki table.

Finally, the Life Story of Calhanoglu has shown that we lose the excitement of possibilities without leaps of imagination or dreams.

Even though his father created a pathway for him, Hakan was responsible for fulfilling the clarion call of destiny.

It behoves us to commend his mother, who was always there to encourage him in trying times.

Also, the efforts of Huseyin (his dad) and Muhammed (his brother) have helped spiced up Hakan’s career pursuit. It’s all thanks to them that he has been able to achieve so much in soccer.

Thank you for reading our Hakan Calhanoglu Childhood Story and Biography Facts. Bear in mind that our team at Lifebogger are on the look to satisfy you with fascinating boyhood stories of your revered footballer.

Kindly contact us if you find anything that doesn’t seem right with our article.