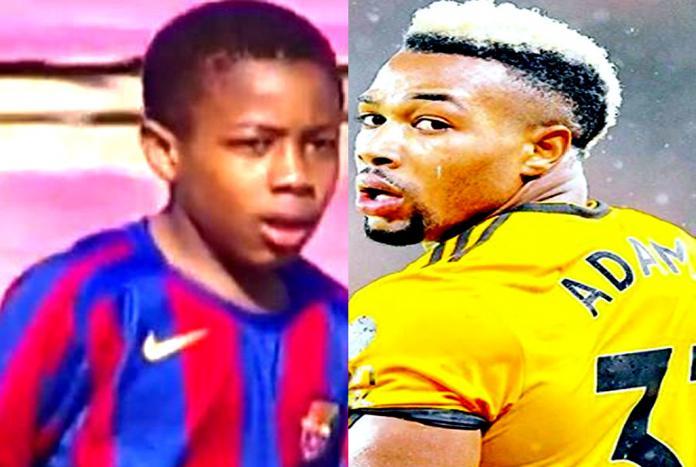 LifeBogger presents the Full Story of a Football Genius best known by the nickname “Usain Bolt“.

Our Adama Traore Biography Facts give you a full account of notable events from his childhood. To whet your autobiography appetite on how engaging Adama’s Bio would be, let’s show you this gallery of his early life and rise.

Yes, everyone knows about his muscular build and speed, which makes him one of the fastest footballers in FIFA and the world.

However, not many soccer fans have read Adama Traore‘s Biography, which is quite interesting. Now, without further ado, let’s begin.

For Biography starters, his full names are Adama Traoré Diarra.

Adama Traore, as he is often called, was born on the 25th day of January 1996 to his mother, Fatoumata, and father, Baba Traoré, in the municipality of L’Hospitalet de Llobregat, southwest of Barcelona.

He is the second son and child out of three children born to his lovely parents, who are pictured below.

Adama Traore’s parents are Spanish immigrants who have their family origin/roots from Mali, a landlocked country located in West Africa.

Just a tip… The West African country of Mali makes up about half of the Sahara Desert, and it is the eighth-largest country in Africa.

Adama Traore’s parents left their country of Mali to settle in Barcelona, a city they believed would offer better opportunities for their children. It was a decision that paid off.

Growing up, Adama Traore wasn’t like some football stars (eg. the likes of Gerard Pique, Mario Gotze, and Hugo Lloris) who lived lives of affluence before reaching stardom.

He came from a middle-class family background, one whose parents weren’t able to afford the newest collections of toys for him as a child, only a football.

Adama grew up alongside his older brother Moha and a lovely sister, Asa in a football-loving household.

Having been brought up in the Spanish city of Barcelona, it was only natural for him and the entire family to fall in love with the beautiful game of football, thanks to FC Barcelona.

The love for the game prevailed over other sports, as Adama, with his brother Moh, began to graze football in the neighbouring fields of CE L’Hospitalet.

Soon after, they both began receiving soccer education at Centre D’Esports L’Hospitalet, a club where they both made incredible progress.

Early on, both brothers knew they had talent, and they could make something big out of football.

To their parents and family members, there was never much doubt that Moha and Adama were heading in the right direction.

It was Adama Traore who progressed faster than his brother because he was more talented.

Back then and presently, it was every child’s dream to join La Masia, one of the greatest footballing academies in the world. Upon joining, it was fun for little Adama.

To meet up with the stiff competition, he had to make lots of sacrifices, like missing birthdays and things he was looking forward to at home.

All these sacrifices were needed in order for him to make an early impression on the club.

Did you know?… The year (2004) when Adama joined La Masia, coincides with the year Lionel Messi exploded into the scene of senior football.

Back then, Adama, together with other kids, all followed the footsteps of their boyhood hero AKA La Pulga (GOAT).

Down the road with La Masia, Adama continued to show progress as he journeyed through the academy ranks. Despite being short, his strength, power, and lightning pace made him famous at the youth level.

Did you know? Adama Traore earned the nickname ‘Usain Bolt’ due to his explosive speed during his formative years in Barcelona’s La Masia academy.

Because he was that good, Adama became frequently used against opponents of higher age groups and thrived against players older than him.

He was used both as a right-back and an attacker during his days at La Masia.

While other kids were dropped in the highly competitive La Masia academy due to lack of performance, Adama Traore wasn’t as he was good at making his passion his job.

Below is a piece of video evidence that shows the amazing displays of the football prodigy during his time at La Masia. Special Credit to AirFutbol.

In the year 2013, Adama Traore became a regular with Barcelona B, clocking up more than 40 league appearances for the side.

He was instrumental in helping the Barcelona B team in winning the 2014 UEFA Youth League.

That same year, Adama made his professional debut with FC Barcelona’s senior side as he replaced Neymar in a La Liga win.

Due to his impressive performance at the FC Barcelona team B and senior team start, clubs all over Europe came chasing after his signature.

On 14 August 2015, Adama Traoré joined Premier League club Aston Villa and a year later, Middlesbrough, where he continued to use his pace to cause several problems for opposition defenders.

His coach, Nuno Espírito Santo achieved tremendous success in his mission of using his speed and power via counter-attacks to punish the tired legs of opponents.

On a memorable note, the speed and power of Adama Traore were most tapped on the 6th of October 2019.

It was the day Adama laid a siege to Pep Guardiola‘s hardcore Man City squad as he scored two goals in an away victory (0-2), a feat which is indeed one of the greatest highlights in his professional career.

Now, without a doubt, Adama has made football fans believe that speed and power are among the prerequisites needed by a modern-day footballer. The rest, as they say, is now history.

With his rise to fame and popularity, especially in FIFA, lots of fans have pondered on knowing if Adama Traore has a girlfriend or wife.

Without a doubt, his physique and good looks would surely make him be on the boyfriend’s wish list for most female fans.

At the time of writing, we’ve found out that there exist no traces of Adama having a girlfriend or being involved in any relationship. From what it appears, he prefers to focus on his football career.

However, we do see a lot of young footballers behaving this way in order to stay low through the important phases of their careers. It could also be that Adama has a girlfriend but prefers not to make his relationship with her public, at least for now.

Getting to know Adama Traore’s personal life off the pitch would help you get a better picture of him. Starting off, at first glance of Adama, you could perceive the beginning of something energetic and turbulent.

Off the pitch, he pays special attention to his gym workouts, a reason for his significant muscle mass and physique.

In an interview with Marca, Adama claimed the opposite, that he isn’t a weight lifter. In his words; “I haven’t lifted a single weight. I know people won’t believe it, but it’s true.”.

The question is; Do you who is reading this article believe what he said even as you consider this photo of him as a 17-year-old footballer?…

Secondly, in his personal life, Adama Traore is someone who always has something to offer the world, and that is no other thing than the “Speed” he brings to the game of football.

Thou he might not be in the ranks of Messi and C Ronaldo, but Adama Traore has created his own world of greatness as observed in FIFA18 Awards. Video evidence (below).

Out of a total of approximately 55,000 Malian migrants living in Spain (Efe Reports), the Adama Traore family is among the few successful who have made a name for themselves.

The family is being credited for forging their own path toward financial independence using football as a means.

His dad, who is simply referred to by the nickname “Baba” is a pure Malian by ancestry.

When you look at Baba pictured below with his son, one thing comes to mind. It’s the body structure of both father and son. (those muscular builds!).

You could easily conclude that Adama took after his father in his body builds.

Baba, like many good dads, was instrumental in providing support for Adama while he was at the Catalonia factory of football.

Fatoumata is her name, and she is often called ‘the supportive mum‘. According to her son Adama;

“My mum has always been supportive, driving me everywhere and picking me up as a youth player. She was even there with me, showing me support, the day I signed for Wolves.”

From their photo above, you can tell that an endearing tenderness of love exists. Between both Adama and Fatoumata, one which transcends all other affections of their hearts.

Below is the beautiful baby sister of Adama, who goes by the name Asa. She, at the time of writing, lives in Spain and often times visit her big brother in England.

Mohamed Traoré Diarra is also known by the nickname “Moha“. He is the elder brother of Adama. Moha (born 29th November 1994) is two years older than Adama. He also became a professional footballer.

As a way of paying allegiance to his family roots, Moha, on the 17th of February 2014, switched from playing for Spain to playing for Mali.

At the time of writing, he currently plays as a forward for the Spanish club Hércules. This club is in the Segunda División B, which is the third level of the Spanish football league system.

For a footballer who earns 2.6 Million euros (2.2 Million Pound) per year at the time of writing, there is indeed enough money for a normal life.

Adama Traore’s financial success is tied directly tied to his performance as a footballer.

Making lots of money doesn’t transcend to living an exotic lifestyle for Adama. A life which is easily noticeable by players who showcase big mansions and flashy cars.

The Lowest Moment in his Career:

January 2016 is recorded as one of the worst moments of his career.

Did you know?… Adama Traore was demoted from the Aston Villa senior squad because of the repeated instances of indiscipline.

This decision had a negative impact on his team. As his side was relegated from the English top flight at the end of that season.

He has a Good CV:

Many football fame got to know Adama Traore while playing FIFA. Truth is, the speedy and powerful footballer has come a long way, as observed from his CV which speaks volumes of his achievement.

FACT CHECK: Thanks for reading our Adama Traore Childhood Story plus Untold Biography Facts. At LifeBogger, we strive for accuracy and fairness.