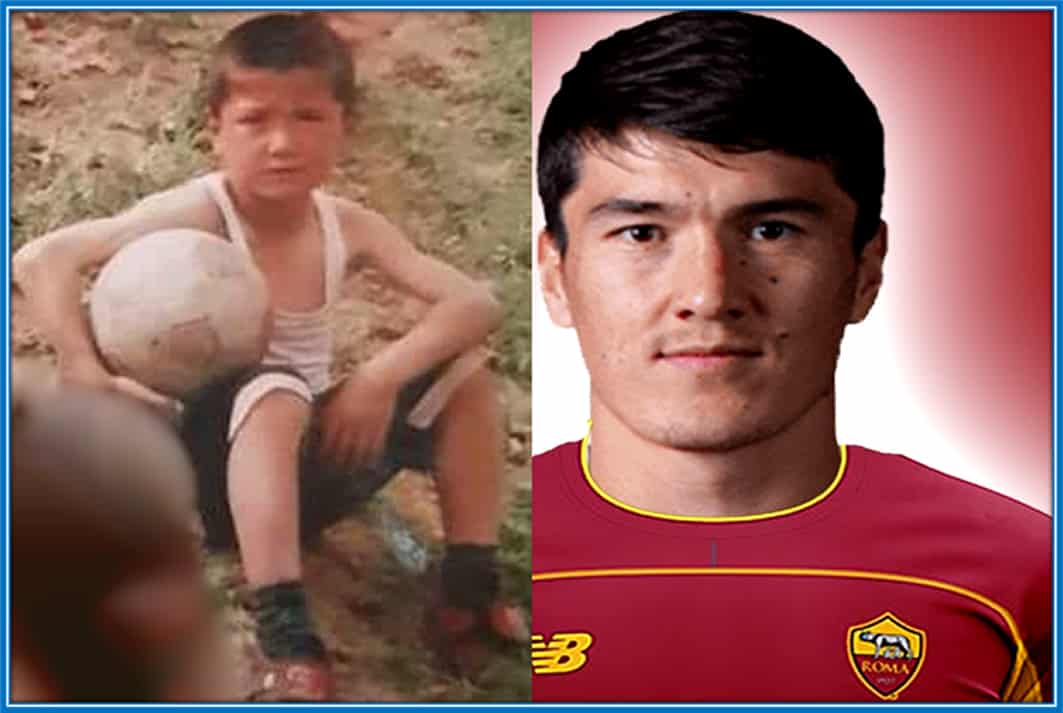 In simple terms, we present you with the forward’s life story, from his early days to when he rose to stardom.

To whet your autobiography appetite, here is his boyhood to adulthood gallery — a perfect summary of Eldor Shomurodov Bio.

In case you are not aware, he is the second Uzbekistan national ever to play in Serie A. However, only a few fans have read his Life Story, which is quite interesting. Without further ado, let’s begin.

For Biography starters, his first name (Eldor) is often used as his nickname by fans. Eldor Azamat oʻgʻli Shomurodov was born on the 29th day of June 1995 to his father, Azamat Shomurodov, and mother in Jarkurgan, Uzbekistan.

The striker is one of the two children born of the union between his parents. Right from birth, Shomurodov had lots of soccer potential running through his vein.

This is because he came from a football-centric family. Hence, the young boy developed an interest in the game before he could even walk.

Shomurodov was raised alongside his brother and two other cousins (Umid and Shavkat). But he spent most of his time with his cousins, who were born in the same year as him.

The boys were often cheerful and more concerned about football more than anything else. They were passionate about surpassing their fathers in the future.

Hence, Shomurodov and his cousins spent less time on toys and paid more attention to exercise.

The forward is lucky to have parents who earn fairly enough to provide for all their necessary needs. Even when his father quit soccer, he built a business that has helped his family fared as an average household.

Moving on to his ancestry, the striker comes from the most popular country in Central Asia. He is a native of Jarkurgan, a town in the Surxondaryo Region (whose capital is Termez), Uzbekistan.

You probably didn’t know that his country of origin declared its independence after the Soviet Union was dissolved. Hence, it became known as the Republic of Uzbekistan on the 31st day of August 1991.

The hometown of Shomurodov is not quite popular among the cities in his country. But, it is known for its beautifully designed minaret, which was erected in 1109.

His parents were aware of their responsibility to give him a proper education, and they never failed in that regard. Though he studied like every other kid, Shomurodov did not stop to think about soccer for a single day.

Whenever he got home from school, he usually strikes some conversions that were tailored towards sports. In a nutshell, he received a formal education and also delved into the career of his dream.

There is no way his mother could dismiss the possibility of her son getting injured while playing soccer. Her fears led her to forbid him from joining other kids in their games until he turned 7.

Thanks to the career endeavours of his uncles and father, Shomurodov never lacked a ball. He often accompanied his cousins to the pitch, with each boy holding their personal balls. Indeed, the trio savoured every moment spent on the fields with their friends.

Playing on the streets with friends was never a guarantee of a brighter future in the game. Hence, his parents enrolled him at Mashal Academy in 2007.

While training as a rookie in the sports’ institute, his uncle played as a professional for the club. This became a motivation that assured him he could climb onto the top if he worked very hard.

Moreso, he had his eyes fixed on two of his football idol – Fernando Torres and Didier Drogba.

They were the players he wanted to imitate so badly. His first step to success was to follow the senior players of his team to the pitch on match days.

For about 4 years, the athlete trained thoroughly and learnt many technical skills. Moreso, his days at Mashal Academy exposed him to real-life challenges in the game.

In 2011, he left the first grooming ground of his career to join Mash’al Mubarek. As expected, it took him quite a while before he ascended the ranks of his team’s first squad.

Do you know?… Shomurodov was 19 when he made his senior debut in the Uzbek League in 2014. Sadly, the striker couldn’t find the back of the net in all his 9 appearances for Mash’al Mubarek.

The year 2015 came with many breakthroughs for the attacker. It was the period in which he successfully broke into his country’s U-20 national team as well as sealed a deal with Bunyodkor.

In 2017, Shomurodov’s performance attracted scouts from the Russian club, FC Rostov. They offered him a better payment than Bunyodkor, which he didn’t decline. Hence, he played for Rostov for 3 years before joining the Serie A club, Genoa.

Mourinho Surprising Interest in The Forward:

It was absolutely difficult for the striker to adjust to the new League. Competing against world-class professionals like Romelu Lukaku and Ciro Immobile wasn’t an easy job for him.

In August 2021, the world stood in awe when Jose Mourinho expressed his interest in Shomurodov. No one could understand what the Special One had in mind while seeking the striker’s signature.

But fans believe in his judgement as he signed Eldor on a 5-year deal worth €17.5 million with Roma. Perhaps the athlete’s career will record a meteoric rise with his new club. The rest, as they say, is history.

Rather than going through the usual route of long-time dating before marriage, the forward has taken a different path. Yes, since his early career days, Shomurodov was not known to have a girlfriend.

However, when the time was right, he looked for a wonderful woman who will make a good wife. In the end, he found Omina and two months afterwards the couple got married.

We’ve got a video that displays the beautiful ceremony of his wedding. Feed your eyes with the clip below and tell us what you think about the celebration in the comment section.

His marriage has so far (as of 2021) yielded to the birth of only one child. According to one of his interviews, Shomurodov revealed he doesn’t score more goals anymore because he is married.

One attribute that stands out as a trademark of his personality is his humble nature. During his days in the Russian League, Shomurodov often visited one market in Rostov to eat pilaf with average folks.

Aside from soccer, he enjoys watching ice hockey. It is a hobby he has developed over the years. Moreso, Shomurodov can spend enough cash on trips to any arena just to watch some games.

Regardless of the money he has made, the footballer doesn’t share information about his luxury on social media. However, he has acquired so many assets, which include some exotic cars shown in the video below.

As I compile this Biography, there has been no information about Shomurodov’s house. We believe that he may have purchased a beautiful mansion, which he has no interest to show off just yet.

Perhaps if he grew up in a different home, he would have probably aspired to become a doctor or an engineer. But his actual family has contributed to his profound aspiration to succeed as a player.

It was as if he was being pre-destined for sports since his father and uncles were all involved in the games themselves. Hence, we present you with facts about each member of his family.

Azamat Shomurodov is the striker’s dad. As earlier mentioned, he was also a footballer who featured for Shurchi back in the days. Sadly, he sustained a terrible leg injury during his playing days.

The sad event worried his family so much that they stopped him from returning to the pitch. Hence, Shomurodov’s father gave up on soccer to make his parents and brothers happy.

In the end, he worked towards raising his son into achieving the kind of success he never got to attain in his career.

The scorer’s mom has been a major inspiration in his Biography. She was the one person who spent so much time with him since his childhood.

However, the striker hasn’t spoken much about his mother to date. All we know is that he often discussed his failures and achievements with her whenever he returns home on vacation.

Life turned out to smile on the athlete as it graced him with one biological brother. Indeed, his only sibling also followed in their father’s footsteps and played soccer. But he didn’t turn out to be as successful as Shomurodov in the game.

Even before his birth, many of his many members had established themselves in football. His grandfather worked as a coach for a particular club. While two of his uncles, as well as his dad, featured in the professional League of his country.

His uncle Ilhom Shomurodov was so talented that fans gave him the nickname ‘Builder’. While featuring for Nasaf, he won the AFC Cup. Also, he won the Uzbekistan Cup with Bunyodkor.

Amongst all his relatives, Shomurodov is closer to Umid and Shavkat (his cousins). They were his childhood’s most trusted allies.

Although the three boys shared their passions for sport in their early days, they all walked a distinct career paths subsequently.

To wrap up our Biography of the striker, here are a few realities that will enlighten you about his Life Story:

Fact #1: Net Worth And Salary Breakdown:

Before his move to Roma (where he will feature alongside Pedro Rodriguez), Shomurodov was earning an annual salary of €2.26 million at Genoa. Of course, his income is on the verge to skyrocket at his new club.

However, when compiling this Biography, we estimated Eldor Shomurodov’s Net Worth to be a whopping sum of €3 million (2021 Stats).

Do you know?… An average Uzbek citizen will have to work for 33 years to earn what the forward receives in a week. We’ve tactically analysed Shomurodov’s salary as the clock ticks. See how much he has made since you came here.

Since you started viewing Eldor Shomurodov’s Bio, this is what he has earned.

Research shows that 75% of the population in Uzbekistan are Muslims. On this note, there is a high probability that Shomurodov was raised in accordance with the Islamic Faith.

While this is only a speculation, it has a greater chance of being the truth about his religion.

From what we have observed, Shomurodov needs to work on his dribbling skills to make himself a more formidable attacker. His agility, shot power, and finishing are just within average.

But, we believe he can still develop his potential to the levels of professionals like Lorenzo Insigne.

The table below reveals quick facts about Shomurodov. It is designed to help you skim through his profile as fast as possible.

Even though his move to Roma has raised many questions, it is only a matter of time before the athlete proves his worth to the world.

Of course, with the likes of Lorenzo Pellegrini in his team, Shomurodov will perform beyond everyone’s expectations.

It’s all thanks to his father, mother and family members that he has succeeded in his career path. Today, his entire country celebrates him as the second citizen to have made it to Serie A.

We hope he records many glorious achievements in his new club. Thanks for reading our Biography of Eldor Shomurodov. Kindly share your thoughts on his profile in the section below.

May 9, 2022
SUSBSCRIBE TO LIFEBOGGER STORIES!