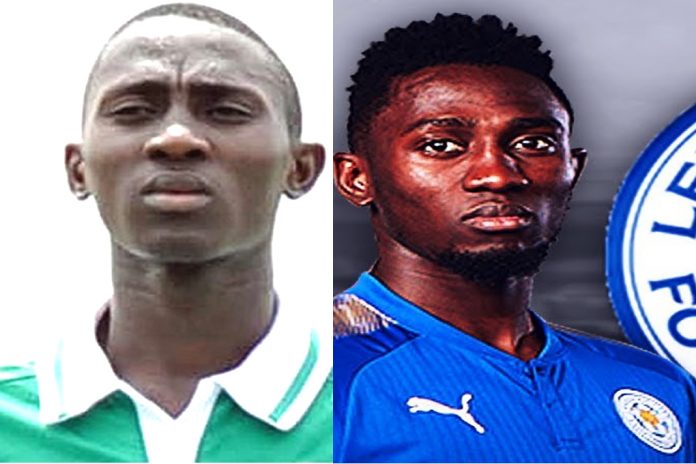 LifeBogger presents the Full Story of an Action Midfielder known by the name; “‘teddy bear“.

Our Wilfred Ndidi Childhood Story plus Untold Biography Facts brings you a complete account of notable events from his childhood time to date.

Yes, everyone knows about the fact that he is an all-action combative midfielder. However, not many soccer lovers have read Wilfred Ndidi’s Biography, which is quite interesting. Now, without further ado, let’s Begin.

For Biography starters, his full name is Onyinye Wilfred Ndidi. Ndidi was born on the 16th day of December 1996 in Lagos, Nigeria, to his father (a serving military man at the time of writing) and his mother, who is a trader.

He was born as the first child and the only son of three kids. This literally means he has two sisters.

The Nigerian footballer (Wilfried Ndidi) was born to a Military officer. As the son of a military man, Ndidi grew up in the Military Cantonment in Ikeja, Lagos.

He started playing football at the Command Children School, which offered him the opportunity to passionately play competitive soccer during sports periods.

Our version of Wilfred Ndidi Childhood Story is interesting, if not uncommon–It about a little boy with a testing childhood life, one who went against all odds stacked against him by his military father.

Ndidi, right from his primary schooling days, possessed a steely determination to make his dreams come true and his ambitions were not just a passing fancy.

For Ndidi, the focal point in his childhood life entails him going against the wishes of his father who never wanted him to become a footballer. In his words…

“My father was not really into football because of his Military job. Ndidi he told the Leicester Mercury.

“My dad watched it on the television on a few occasions, but he didn’t want me to play football. Despite him being a soldier, he still never wants me to follow in his footsteps. He just wanted me to go to school.

I did miss out on schooling because of football. Since my dad’s military life came with lots of postings and distance away from the family, I took that opportunity and moved to Nath Boys Academy without his knowledge.

This time, going to school became totally off my mind because I trusted my abilities.

He only got to know when Nigeria called me for the 2013 African U-17 Championship. That time, he gave me fatherly blessings and full support”

Back then at Natt Boys Academy, Ndidi played as a striker with guys above his age group. He attributed his toughness on the ball to the knocks he received from the older players while growing up.

Ndidi grew up in the football ranks at Nath Boys Academy and became their best player. It didn’t take long before he got the shocker of his life, as they called him to represent Nigeria at the 2013 African U-17 Championship.

He came into the tournament as a central midfielder thanks to his utility role.

His performance at the championship saw Belgium scouts raiding him off the West African country to Belgium, where he joined Genk.

At Genk, he became a first-team regular started and showcased a wide range of passing and shooting at long range.

Ndidi got global recognition when he scored a long-range goal of the season in Belgium. His ferocious volley was measured to travel over 111 km/h.

This made English champions consider him as a possible replacement to N’Golo Kante. KRC Genk snapped up the young Ndidi for about £78,000 but made a tidy profit when they sold him on to Leicester City barely two years later for a reported £15m.

As Ndidi puts it; “Musa drives me around. If we have an away game, he picks me up and drives me to the airport, during breaks, he drives me showing me stuffs around town. At this moment, I don’t have my driving license and still don’t know how to drive.”

Unlike Ahmed Musa and Kelechi Iheanacho, Ndidi adapted to Leicester City at a fast pace. His bullet goal against Stoke captured the hearts of Leicester fans.

For Leicester fans, The love for Ndidi still deepens even though he got his first career red card on 16 December 2017 – which also happens to be his birthday. He will be forever known as an ‘all-action midfielder’. The rest, as they say, is now history.

Did you know?… Wilfred Ndidi’s quick adaptation to European life and football was largely aided by a Belgian couple, Theo van Vlierden and his wife, Marleen, who adopted the emerging star on his arrival at Genk in 2015.

The couple tells ’TANA AIYEJINA of Punch NewsPaper about their first encounter with Ndidi and how they have lived as one happy family ever after… Below is a glimpse of the interview session;

How and when did you get to know Wilfred? …Theo: That was the beginning of January 2014 when Wilfred arrived in Belgium for his two-month test period with KRC Genk. At that moment, he was still a young guy, just 17 years old.

The first three or four days he arrived, he was staying in a hotel. But there was a lack of hospitality space, and KRC Genk called us with the request if we wanted to take Wilfred to our home for a few weeks.

My wife and I looked at each other, we didn’t say anything, and we nodded our heads, which meant yes.

What was your first impression of him, and what attracted your family to him?

Marleen: I think our first impression of Wilfred was that of a shy and timid boy. We immediately thought it must be very cold in his summer clothes, it was winter and very cold. His shy smile and pearly white teeth did the rest and we agree.

How challenging was it for him to adapt to life in Europe?

Theo: Of course, it’s a big challenge for every boy of that age to adapt to a foreign country. But I must say that he has adapted quickly to life here and even in England.

When he first got to Belgium, he felt quite at home after just a few weeks. We also told him several times what he should do when he was at home, and he was a part of our family.

They say Wilfred is such a charming personality, do you agree?

Marleen: Yes, we fully agree. Wilfred is a charming personality. Always good-humoured, friendly and polite. Not only in our home, also towards other people. He is loved by KRC Genk staff, his teammates and the fans.

When he made the move to England, how did the family feel?

Theo: After more than two years of living together, this certainly creates a special bond. Of course, we have and will always miss him.

He has become a part of the family. He is our son and will always stay our son. His move to England left Marleen with some tears.

For me, it was also very emotional. We hear from him almost on a daily basis via WhatsApp and social media.

In the past few months, we visited him with our son Christophe, several times. The first time was in January for the game between Leicester City and Chelsea.

The second time was a few weeks after then. Together with our son, we transported in a Ford Transit van, we took his clothes and other things via the Channel Tunnel to Leicester in the UK. In March and April, we also visited him again and we watched a few games of Leicester.

With his amazing talents and personality, how far do you think Wilfred can get as a footballer?

Theo: We strongly believe Wilfred will go very far as a football player. If his attitude keeps focused on football, he will make progress. For sure, I do not believe that this is his final station.

Ndidi scored his first goal in England, a superb 25-yard effort in the FA Cup. How did the family celebrate the goal?

Marleen: We were very happy. At the same time that evening, my husband and son were at the Belgian Golden Shoe Gala evening.

Wilfred was awarded the Most Beautiful Goal of the Year 2016 in Belgium and he was also one of the three nominees for the Promising Young Player of the Year.

He scored a magnificent goal against Club Brugge, which you would have also seen, I suppose.

Quite a lot of people feel it would be difficult for him to fill N’Golo Kante’s large boots. Were you sceptical initially?

Theo: No I was not at all. You cannot compare both players. Kante is Kante and Ndidi is Ndidi.

Let’s face the future, Kante has large boots but Ndidi has long and extendable legs that are everywhere to recover the ball. He has a very large running ability and huge endurance.

When he first arrived in Belgium, how did he cope with the food, weather, culture etc?

Marleen: Of course it took some time.  But in general, everything was going very well. I cooked a lot of food with rice, noodles and chicken. He also likes to eat egg omelette with ham, tomatoes and onions.

He also finds delicious oven casserole, meatloaf with mashed potatoes and leeks. Sometimes a Nigerian teammate brought him Nigerian food from the city of Antwerp. The weather was something else.

I hear in Nigeria it’s always warm, between 28 degrees in winter till 36 degrees and more in summer. That is a lot of difference with the temperature here. For example, he never saw snow (before he arrived in Belgium).

How much do you know about his roots?

Theo: We know something about his roots. We saw some pictures of his mother, father and two younger sisters. Of course, we know something of the Nigerian society and we see also the news on TV.

Ndidi is a confirmed Chelsea fan right from his youthful days. He grew up watching Didier Drogba, John Terry and John Obi Mikel his favourite who inspired him to become a footballer.

“I have always looked up to Mikel,” Ndidi told Goal. “When he was at Chelsea, I was at Nath Boys [as a youth player] and I have always liked him as a player. I have always been crazy about Mikel. The way he plays is amazing.

In Nigeria, When I and my friends talk about players, we always want to talk about Mikel. He is so important for Nigerian football. I actually liked 1 player outside of Africa [when I was younger], that’s Ricardo Kaka.

At his departure from Genk to join Leicester City, Ndidi wrote an emotional letter to the KRC Genk fans, which went viral on Instagram with over 8000 likes in its first few days online.

Ndidi is a fans’ favourite at the King Power Stadium and has a special number dedicated to him by the Leicester City faithful and it goes like this:

FACT CHECK: Thanks for reading our Wilfred Ndidi Childhood Story, plus untold biography facts. At LifeBogger, we strive for accuracy and fairness. If you see something that doesn’t look right in this article, please place your comment or contact us!

My name is Aga Aondowase Benjamin Jr, He is my idol, I play like him, born the same month, support Chelsea why growing, alot like him…. 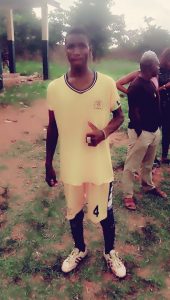