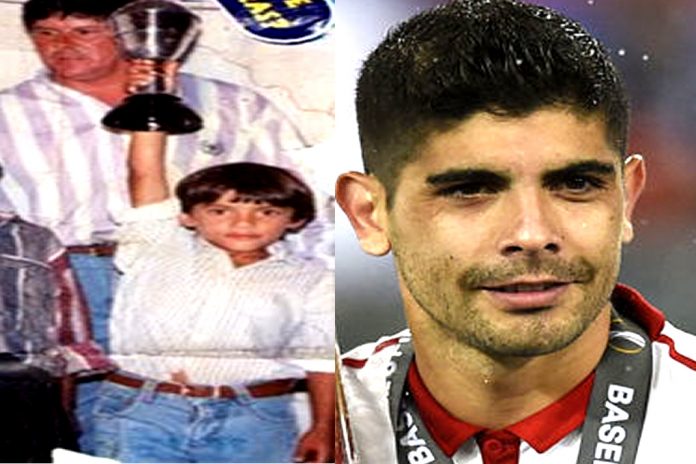 More so, Ever’s Lifestyle, Girlfriend /wife, kids Personal Life and other notable events right from his childhood days to when he became popular.

Yes, everyone knows about his tactically intelligent and versatile playmaking abilities, but few consider our Ever Banega’s Biography, which is quite interesting. Now, without further ado, let’s Begin.

Starting off, Ever Maximiliano David Banega, nicknamed “Tanguito” was born on the 29th day of June 1988 in Rosario, Santa Fe Argentina. He was born to his father, Daniel Banega, and to his relatively unknown mother.

Banega comes from a desperately impoverished family background. His childhood story is interesting, if not uncommon.

It’s a story of a young dreamer who rose from obscurity to achieve fame, fortune and even notoriety as severally noted in this article.

Since his childhood, Banega’s ambitions of becoming a professional footballer weren’t just a passing fancy.

He was brought up in a family dominated by males and grew up in Rosario with his four brothers namely; Luciano, Cesar, Emiliano and Brian.

Banega started playing football in the city of Rosario, a city where emptiness ends for little boys when there’s a football on their feet and a trophy on their hands.

Rosario, the city where he grew up, is a province of Santa Fe, some 180 miles from Buenos Aires (Argentine capital).

It’s a football city with a population of 1.2 million inhabitants which is roughly divided into two distinct camps.

This by implication, means Rosario is the city where Angel Di Maria, Lionel Messi, Mascherano and Ezequiel Lavezzi all grew up. All parties, including Ever Banega, knew each other when they were little boys.

Banega came through the youth ranks at Boca Juniors, reaching the first team at 18, and winning immediate recognition thanks to his above-average passing.

He, for one, remembers clashes with the young Lionel Messi when he was still learning his trade at Newell’s Old Boys.

Messi made us all look stupid. He was a tiny dwarf and his kit was way too big for him, but what he used to do was already far too good.”

After teammate midfielder Fernando Gago moved to Real Madrid in January 2007, Banega was named as his successor despite his young age. Back then at Boca Juniors, he was usually given a standing ovation whenever he leaves the pitch.

On 5th January 2008, his miracle finally came. Banega got a call to Europe to play with Valencia. The rest, as they would say, is now history.

Behind every great man, there’s a great woman, or so the saying goes. And behind almost every Argentine footballer, there’s a glamorous wife or girlfriend.

Valeria Juan is the wife and former childhood sweetheart of Ever Banega. She is often credited for keeping her husband’s wild behaviour in check ever since both lovers met. 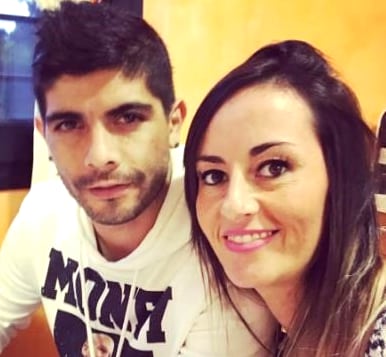 Born October 5, 1986, Valeria is two years older than her husband.

She is someone who tries to maintain her private life with the exception of important moments, such as their civil marriage with his love of life celebrates his birthday.

Another involves the birth of their children. At the time of writing, the couple have two children; Agostina, born October 11, 2010, and Romanella; born June 8, 2016.

Below is little Agostina Banega having a funny moment with her lovely parents. 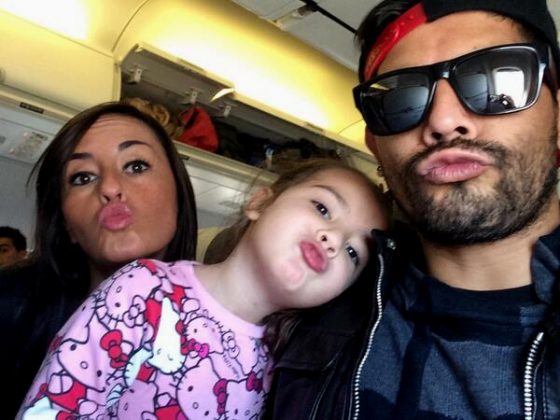 In the family, there is also Daisy, their dog, who is older than Agostina, meaning it has been with them for years.

Just like her husband, Valeria is also from Rosario and is deep-rooted to the Rosarian culture, which involves making kids like little Agostina provide helping hands in the kitchen. 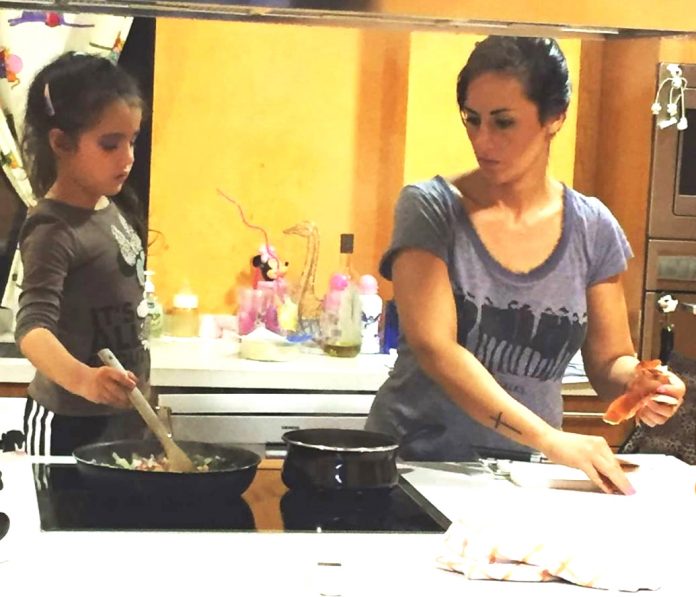 Ever Banega comes from a middle-class family background.

His father, Daniel Banega, was a former amateur footballer who later rose to become a coach of Nuevo Horizonte team in the year 1987.  He once played for the Argentine team in their low division.

However, both Daniel Banaga and his wife (mother of Ever Banega) sacrificed a lot in order to survive 2001 Argentine depression.

Today, Almost all Rosario’s middle and lower-class families are further united by memories of past sacrifices.

“At some point in time, all that was left was for us to eat was wet mud; it was a tough upbringing,” Banega remembers of his infancy and family struggle.

We find it pertinent to note that both Ever Banega and Angel Di Maria family have been close for years.

It was the latter’s family who helped out through their tiny coal-making shed to make ends meet between Ever Banega’s games as a youngster.

There were also acquainted with the family of Lionel Messi, who is from a more affluent background. However, their family wasn’t immune to the Argentine crisis of 2001.

This was why Lionel Messi’s family emigrated to Catalonia (Spain) at the age of 13.

‘My dad and mum used advised me and my brothers on how to work hard. There were no toys or games when I was younger, just a football.

I’m entirely grateful for everything my parents did. They always pushed me. Without them and especially my wife, I wouldn’t have this incredible journey that I’m on so far.’

As stated earlier, it was his wife that made things turned around for him as regards changing his notorious behaviour.

In the words of Ever;… “I arrived at 19 and made mistakes. I wasted years and have thought about things. Now I’m a changed man, all thanks to God and my wife, Valeria.”

Now we present to you the mistakes and bad luck facts of Ever Banega. Read below!

Banega was once viewed as so undisciplined, insubordinate and outrageous in his behaviour which made his club Valencia lose complete hope in him.

Truth be told, his $23-million move from Boca Juniors (Argentina) to Valencia (Europe) in Spain was almost comical in its aftermath.

Within days of his arrival, a video appeared on the Internet showing a naked Banega “defiling and pleasuring his joystick for strangers” on his webcam, This was according to Valencia officials. The clip allegedly shows Banega chatting on his computer before “taking matters into his own hands”. 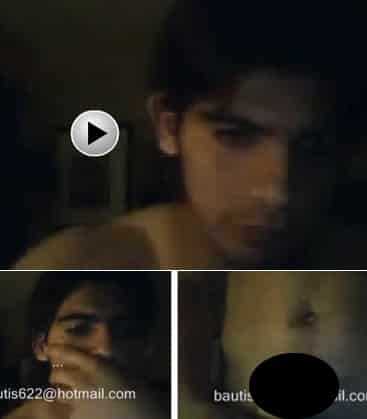 Definitely, a moment never to forget for the Argentine. Reports later revealed that the video was an old footage from the teenager’s Boca days, which nonetheless got Valencia embarrassed.

Ever Banega has once risked the wrath of the Valencia fans after a photo of the midfielder surfaced wearing the shirt of Valencia rivals Real Madrid, which appeared on the internet.

The photo was allegedly taken during a family visit. It showed Ever Banega smiling profusely alongside two of his relatives. 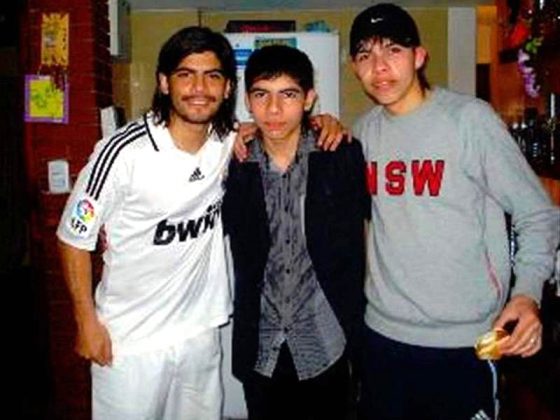 Valencia had to ask the holding midfielder to explain the image, as they are not amused that the Argentine had yet again made the headlines for all the wrong reasons.

No explanation was offered. The club was helpless on his case and just allowed the issue to rest.

Ever Banega Facts – Being Hit by his own Car:

Playmaker Ever Banega once went out of action for about six months with a broken ankle after being run over by his own car. This happened in February 2012. 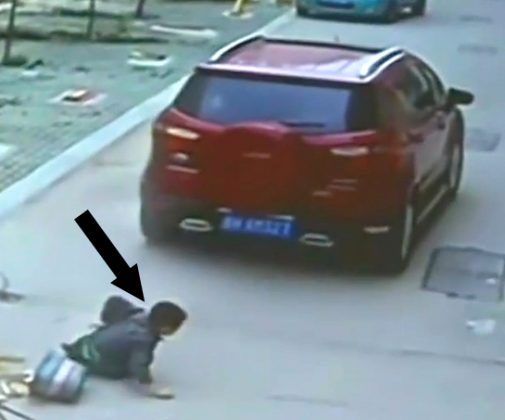 Banega became his own accident victim after he failed to manage his car at a roadside petrol station.

While filling up his car at a petrol station, the Argentine footballer forgot to apply the handbrake as he got out of the vehicle and headed towards the roadside.

This made his car roll forward and running over him. The accident left a trauma to his left leg that caused a fracture to his tibia. While some Valencia fans pitied him, some blasted his unserious life.

What got fans upset was that the accident happened on the eve of Valencia’s second leg semi-final Copa del Rey clash at Barcelona.

It was a match which the club needed him. The Argentine player had to miss the match, despite the opposition Manager Pep Guardiola showering praise on the young talent.

At the start of the 2012 season, Banega’s Ferrari bursted into flames en route to his Valencia training. The midfielder walked away unscathed, but his £250,000 car was completely written off.

Banega is said to have asked passers-by for a bucket of water to put out the flames. Luckily, the fire brigade arrived before anyone was hurt.

Ever Banega Facts – Consumption of Alcohol:

When Valencia loaned him to Atletico Madrid, red cards, late-night partying and disciplinary fines got added to his bad-boy reputation.

It was well known that the Argentine enjoyed Spanish nightlife like no other of his teammates. Early on his career, Banaga was reportedly pulled over in the early hours of the morning (3:30 am) for driving under the influence of alcohol.

It has also been reported that when the midfielder was 24-years-old, he was missing from training on a Friday morning (with Valencia set for a crunch match with Barcelona on the Sunday after Friday). Numerous phone calls were placed to him but no response.

Later, it was observed that Banega arrived to training still drunk from the night before. This literally means he drank so deep into the night.

In the summer of 2007, Banega starred in the under-20 World Cup for his native Argentina, alongside the likes of Manchester City’s Sergio Aguero.

The young playmaker was praised for his performances at the tournament in Canada which Argentina won. Some of the players (including Banega, obviously) decided to celebrate their victory by absolutely trashing their hotel room.

As stated earlier, when Banega signed with the Spanish side Valencia CF. Out of frustration due to his behaviour, they loaned him to Atletico Madrid so he could be handled by Diego Simeone.

Following his return from Atlético in 2014, it appeared that Valencia still wasn’t okay with his presence. They decided to ship him to the English side Everton.

owing to stories about him, The British Border Agency upon conducting a background check changed their minds as regards making his visa available at the time he needed it. Thus his move to Everton collapsed.

Thanks for reading our Banega article so far. Our team strived for accuracy and fairness while putting up the Childhood story and Biography fact of Tanguito.

If you see something that doesn’t look right in this article on the Ever, please feel free to discuss in the comment section.