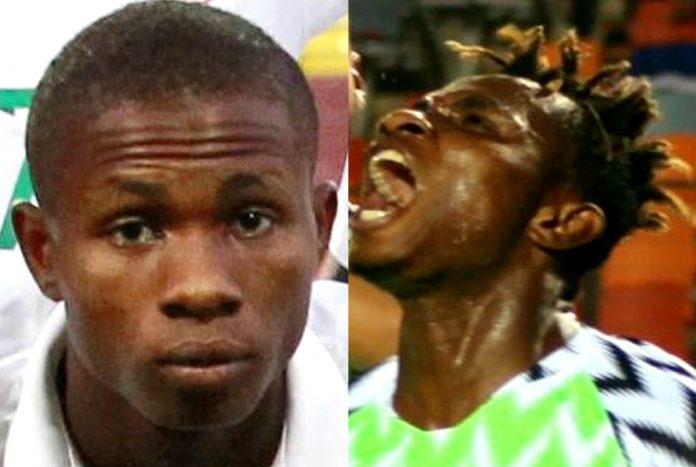 Our Samuel Chukwueze Biography tells you Facts about his Childhood Story, Early Life, Parents, Family, Girlfriend/Wife to be, Cars, Net Worth, Lifestyle and Personal Life.

In the nutshell, this is a Life Story of the  Nigerian professional footballer. It begins from his boyhood days, to when he became famous. To whet your autobiography appetite, here is his childhood to adult gallery — a perfect summary of Samuel Chukwueze’s Bio.

Yes, everyone knows of his direct dribbling and determination. However, only a few consider our version of Samuel Chukwueze’s Biography which is quite interesting. Now, without further ado, let’s begin.

For Biography starters, he bears the nickname “SAMU“. Samuel Chimerenka Chukwueze was born on the 22nd day of May 1999 at the city of Umuahia in Abia State, Nigeria. He is the first of three children born to his little known mother and father.
The Nigerian national of Igbo ethnicity with West African family origins was raised in a middle-class family background setting at his birthplace in Umuahia city where he grew up alongside his younger brother and sister.
Growing up Umuahia, young Chukwueze was only 5 years old when he fell in love with football by watching his childhood Idol Jay-Jay Okocha playing and exhibiting stellar skills in televised matches. While Chukwueze was at it, he fantasized about playing alongside his idol and other football greats in the future.

As the years ensued, Chukwueze became much invested in playing football every day, an activity that he tried hard to blend with studying at Government College Umuahia and later Evangel Secondary School. The young obsessed football player would years later admit that he unwillingly sacrificed studying on the altar of playing football. According to him:
“I was a good student, but my love for football eventually took over my focus while my interest in studying gradually faded.”
The development didn’t go well with Chukwueze’s parents and uncle who did all they could to make him focused on studying. In fact, they once burned Chukwueze’S boots and training kits to drive home how serious they were but the young lad had already become irrevocably committed to playing football.

Regardless of Chukwueze’s parents non-support for his football engagement, the lad stuck to playing for academies which he figured could expedite the realization of his dream of becoming a professional footballer. Speak of the academies, Chukwueze first started with Future Hope U-8 & U-10 team long before he became a high school student.
The football prodigy who went on to train briefly with New Generation Academy later joined Diamond Football Academy in 2012 and was moulded to become a competitive winger. It was at Diamond Academy that made Chukwueze a part of its squad that went for the 2013 Portuguese youth Iber Cup tournament which they won with Chukwueze being the competition’s highest goal scorer.

Two years later, Chukwueze reached a turning point in his career aspirations when he earned a spot in the Nigerian squad which won the 2015 FIFA U17 world cup in Chile, an event that also featured youngsters like Trent Alexander-Arnold, Eder Militao and Christian Pulisic. Following his world cup heroics, Chukwueze began attracting interests from a number of European teams.
He visited the likes of Salzburg, PSG, Porto while Arsenal got very close to absorbing him into their youth systems. However, the youngster committed to Villarreal which had a better deal for him and Diamond football academy. Upon arriving at Villarreal, Chukwueze spent months struggling with language barriers and getting used to Spanish food but never allowed the challenges to distract him from impressing at Villarreal’s club’s Juvenil A squad.
“I had no idea of what I was being fed when I arrived, Villarreal. The meat… It had blood everywhere! I also struggled to understand Spanish before I could even dream of speaking it.”
Recalls Chukwueze of his early days at Villarreal.

Not long after Chukwueze made his senior debut for Villarreal in April 2018, he was featured in the club’s first-team match in September that same year and went on to establish himself as a terrific dribbler with good finishing such that he became likened to football legend Arjen Robben.
Chukwueze eventually achieved breakthrough a year later when he became part of the Nigerian squad that won bronze at the 2019 African Cup of Nations. UEFA also listed him as one of the 50 youngsters to watch in the world of football that same year. The rest, as they say, is history.

Moving on to Samuel Chukwueze’s love life, the winger could be single at the time of writing this bio. This is largely due to the fact that he has not been spotted with any Spanish or Nigerian beauty that can be regarded as his girlfriend.
Reasons, why Chukwueze has no known girlfriend, cannot be unconnected to the fact that he has just a few months experience playing top-flight football. As such, he is investing much time and effort to take his nascent career to greater heights.

Family is not just important to Chukwueze, it is everything to the winger. We bring you facts about Chukwueze’s family members as well as outline available records of his ancestry.
About Samuel Chukwueze’s father and mother: Chukwueze’s parents are not known by their names at the time of writing this bio while not much is known about their individual family roots. However, the winger once stated that his father is a minister of God while his mom has been a nurse since his early life. Both parents were initially against Chukwueze’s football endeavours but had no choice than to give him their blessings before he travelled to Portugal for the 2013 Portuguese youth Iber Cup tournament.
About Samuel Chukwueze siblings and relatives: Chukwueze is the first of three children born to his parents. He has a younger sister and brother whom little is known about at the time of writing. Neither are they records of his ancestry particularly those of his maternal grandparents as well as paternal grandfather and grandmother. Similarly Chukwueze’s uncles, aunts and cousins are unknown while his nephew and nieces are yet to be identified at the time of writing.

Away from Chukwueze on-pitch penchant for terrifying defenders, he has a likeable out-field personality that portrays him as a down to earth, hardworking, positive and easy-going individual. Added to Chukwueze’s persona is his disposition to not revealing much about his private and personal life.
The winger who is guided by Aries Zodiac sign engages in a number of activities that pass for his interest and hobbies. The activities include playing video games, listening to music as well as spending good time with his family and friends.

Regarding how Samuel Chukwueze makes and spends his money, his net worth is under review at the time of writing but he has a market value of €30 million and earns considerably well in salaries and wages for playing in Villarreal’s first team.
As such, the winger lives a luxurious lifestyle as made evident by his spending habits. Although the value of the apartment or house that Chukwueze resides in is yet unknown, his cars collection boasts of an exotic Mazda MX-5 Miata Convertible ride which he uses to find his way around Spain.
Samuel Chukwueze Childhood Story Plus Untold Biography Facts – Untold Facts
To end our Samuel Chukwueze childhood story and biography, here are lesser-known or Untold facts about the winger.
Religion:Samuel Chukwueze was born into a Christian family and raised in line with the tenets of Christian faith. Although the doesn’t go religious during interviews, he is believed not to be a non-fanatical Christian.
Tattoos: The winger – with a height of 5 feet, 8 inches – has no body arts at the time of writing this biography. However, there’s no denying the possibility that he might get tattoos when he establishes himself among world best footballers.
Smoking and drinking: Samuel Chukwueze’s parents have him grounded from the act of drinking and smoking. He has never been captured drinking or smoking on camera. Considering where he came from, it is certain that the winger would not engage in the harmful act which can jeopardize his career.

FACT CHECK: Thanks for reading our Samuel Chukwueze Childhood Story Plus Untold Biography Facts. At LifeBogger, we strive for accuracy and fairness. If you find something that doesn’t look right, please share it with us by commenting below. We’ll always value and respect your ideas.