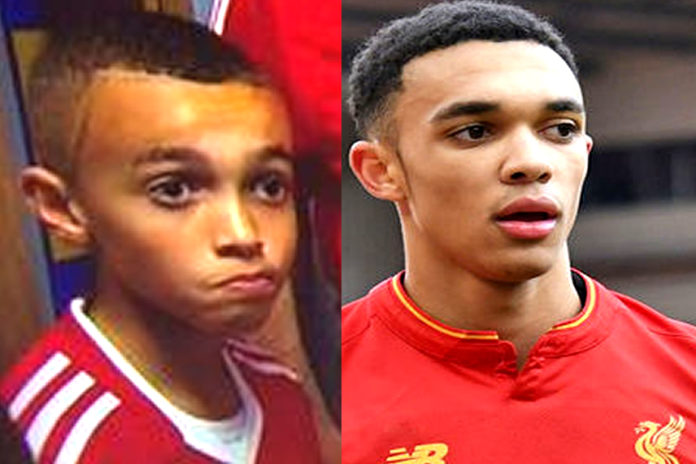 LifeBogger presents the Full Story of a Football Genius best known by the Nickname; “Tee”.

Our Trent Alexander-Arnold Childhood Story plus Untold Biography Facts brings to you a full account of notable events from his childhood time to date.

Yes, everyone knows about his right-back abilities, but few consider our Trent Alexander-Arnold’s Bio, which is quite interesting. Now, without further ado, let’s Begin.

Trent Alexander-Arnold grew up with his two brothers, Tyler and Marcel.

The three of them spent hour after hour kicking a ball together whilst growing up in their family home in the West Derby. It was Trent who finally took up football as a professional career.

He joined Liverpool’s academy in 2004 at the age of six when he was spotted by academy coach Ian Barrigan.

Because he was the best player in his youth team, Liverpool academy product Alexander-Arnold on a few occasions performed the mascot duty of walking out of the tunnel on the night in his role as captain Jamie Carragher.

The picture below was in 2009 when Liverpool met played the EFL Cup quarter-final with Leeds.

He grew up in the club’s youth ranks and went on to captain Liverpool’s U16 and U18 level.

Trent excelled during his time with the academy and in 2015, was singled out by former Liverpool legend Steven Gerrard, who tipped him to have a bright future at the club in his autobiography

Arnold made his senior debut for the club in 2016, aged 18. The following year, he won the club’s Young Player of the Season award. The rest, as they say, is now the future.

The Baller has the following attribute to his personality.

Arnold’s Weakness: He could be indecisive and afraid of confrontations. Trent will also carry self-pity and grudge.

What Trent Alexandar-Arnold likes: He loves harmony, gentleness, sharing with others and outdoors.

Generally, Trent Alexander-Arnold is peaceful, fair, and they hate being alone. He is someone who is ready to do nearly anything to avoid conflict and keep the peace whenever possible.

As stated earlier, it was Steven Gerrard who pressed buttons to Liverpool management, which saw the young star coming to play in Anfield. Below is a photo of little Trent Alexander-Arnold and his mentor, Steve G.

The Baller has once revealed that having a partner is very important for him even though he keeps his relationship at most secrecy.

Trent Alexander-Arnold has kept his personal life private and out of the spotlight simply because he is very young to start a Wag life.

In fact, he usually doesn’t talk about his private life in media and public. He prefers to focus on his career at Liverpool rather than his personal life.

Trent Alexander-Arnold has a girlfriend and is in a serious relationship but managed to keep it low profile which to many means he is possibly single at the present time.

Starting off, Trent originally came from a middle-class family background operated by his father before football finally paid off.

He once revealed how his mum was reduced to tears after she learned her son was starting for Liverpool against Manchester for the first time in his career. The name Manchester United rings a bell to his mother.

This is because Alexander-Arnold’s maternal grandmother, Dooreen Carling (mother of his mother), was once also a girlfriend of former United manager, Sir Alex Ferguson.

She, however, told him to go on and deliver his best which he did. The match ended in a draw.

Alexander-Arnold has two brothers, Tyler and Marcel played a huge role in his development as a professional football player. This Trent appreciates.

In his words…“I think both of them really helped me develop skills that I didn’t really know I was developing at some point in my growing up years. I was working on things I didn’t realise, I was just having fun.

But at the same time, it was working and training hard without even knowing it. I think a lot goes down to them for how I am now.” Below is Alexander-Arnold and his elder brother Tyler. 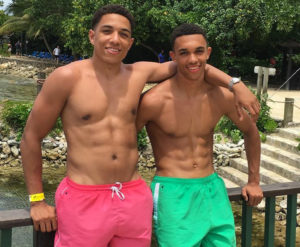 Trent has a nephew which is former Reading and Millwall footballer, and former Manchester United club secretary John Alexander.

Outside of football, Alexander-Arnold volunteers as an ambassador volunteer one hour of his day for the underprivileged members of the community. Oftentimes, he provides them with food, toys and science lessons.

He has supported the charity since being introduced to it by his mother in his mid-teens, and during his time with Liverpool’s academy, he and fellow teammate Kris Owens pledged to support the initiative if either of them made it as professional footballers.

FACT CHECK: Thanks for reading our Alexander-Arnold Childhood Story plus untold biography facts.