In a nutshell, we give you the history of the Polish footballer of Warsaw origin. Lifebogger begins it from his early days, to when he became famous with in the game of football.

Yes, everyone knows he was surely be crowned world player of the year in 2020 if not for COVID. about his goal scoring abilities but only a few fans consider Robert Lewandowski biography story which is quite interesting. Now without further adieu, let’s begin.

Robert Lewandowski was born on August 21, 1988 in Warsaw Capital of Poland by Krzysztof Lewandowski (father) and Iwona Lewandowska (Mother).

He was born into a family of practicing Catholic and spent the first years of his childhood life in nearby Leszno, Western Poland.

As Biografia puts it, Lewy was destined to become a sportsman from the very day he was born. Just likes Leroy Sane, he was born into sports. Ideally, all members of the Robert Lewandowski family are sports stars. His mother, Iwona was an active volleyball player in the first league Academic Sports Association ‘Warsaw’, whereas his father, Krzysztof – a former judoist – was a successful player at the Hutnik Warsaw football club. No wonder that with such pronounced examples on both sides, young Robert followed the trail already blazed by his parents. He had tried various sports, but without a doubt he felt best with a ball at his feet and had record of success as a kid.

His father, having realized his son’s passion, used to take his little boy to Partyzant Leszno training sessions. At the age of nine, he commenced his training at Varsovia Warsaw. 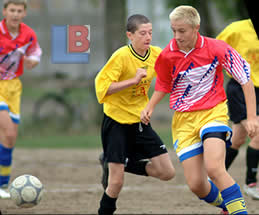 Hard tarmac, sand without a leaf of grass, clouds of dust limiting visibility, unheated old barracks with unsealed windows instead of changing rooms – these were the conditions in which the great talent of Robert Lewandowski started to germinate.

After seven years Lewandowski left Varsovia to join the fifth tier club of Delta Warsaw, which was a direct supplier of players for Legia Warsaw. He progressed there until the unfortunate happened.

His father Krzysztof dreamt that one day he would see his son playing for the club from Łazienkowska Street. Sadly, due to a cruel twist of fate, he didn’t even get to see his son’s first senior game – he passed away in 2005.

The family tragedy forced Robert to man up very early. Henrikh Mkhitaryan also witnessed the same fate after the death of his hero (father).

Despite his still very young age, wanting to lessen his mother’s financial burden, he decided to leave his family home and moved in with his sister in Warsaw. He managed whatever little money he earned at Delta football club. Following a few decent games and four scored goals, he got noticed by the Legia Warsaw scouts.

In the season of 2005/2006 Lewandowski was a legitimate player for the fourth tier reserves of the notorious Polish Champion on a one year contract.

His aim was to enter the primary squad as soon as possible. He made a very good impression as a reserve player, which didn’t escape the attention of his coach and football pundits.

The young striker attended a training camp in Wronki together with the first team with a view to prove his worth.

Unfortunately, there was bad luck. Young Lewy took the fall. He ended up with a terrible injury very early on his career with the club and was unable to demonstrate his full potential. Bakayoko suffered such fate at similar time of his young career. As for Lewy, there now was no chance for him to count on joining the Polish top league – Ekstraklasa. His backup plans of escaping to other lower clubs failed. No one wanted him. Legia, rather unexpectedly and with no forewarning or explanation, decided not extend Robert’s contract.

Behold, a short-lived career came to a standstill. This was the unfulfilled dream of Robert Lewandoski.

Having been rejected by Legia, Robert was left stranded. He belonged to no club and he had no access to a proper training base. Fortunately, just in time, his mother came to his rescue making all possible efforts to make her son’s dreams come true.

In the summer 2006, young Lewy recovered from his injury. He was lucky enough to be snapped by Znicz Pruszków who took risk despite reports that said he was still injury prone.

There, Lewy started a dynamic climb towards football tops. He led his team to winning the Polish third league after scoring fifteen goals which led him to be the league’s top scorer. Lewy’s team gained promotion to Polish top league flight through his efforts. He soon started scoring above 20 goals per season.

He took the opportunity to rejoining his old club Legia after they begged for forgiveness. Again, after looking through a pile of offers and never ending negotiations, Lewandowski decided on playing for Borussia Dortmund, with whom he signed a four year contract.

The season of 2011/2012 proved to be a moment of great breakthrough. And a breakthrough that many footballers who dream of a distinguished career would like to experience. Initially there had been no signs indicating that Lewandowski’s career at Signal Iduna Park was going to change. The situation turned around with Lucas Barrios’ injury at Copa America and Jurgen Klopp picked Lewandowski to fill the vacancy.

The Pole used that chance as best as he could. With him, Dortmund witnessed an incredible transformation. A full-time joker suddenly turned into a first-class striker (almost equal to C Ronaldo) with a killer’s instinct. This is the story of Robert Lewandowski’s rise to fame that denotes his journey to FC Bayern. The rest as they say is history. In Lewy’s words; “I love football, I only love it because it gives me my life. There is no more. “

The Robert Lewandowski’s family is a family made up of football, volleyball, martial arts and judo stars. Now lets start from the late head of the family.

FATHER: Lewy was enjoyed years of close relationship with his dad when he was alive. Apart from teaching him the necessary antics in soccer, Krzysztof also finds time to play local hand games with Lewy.

Everyone was special in his eyes, including Lewy’s sister, Milena Lewandowski. They would both take turns to lie in his arms and watch their favorite children TV programme. Its so unfortunate they lost him while as kids.

She is known to be person who force Robert to man up very early and take the bull by the horn after the death of her husband. No doubt, Robert credits his late dad for laying the foundation for his career. He credits his mum for standing with him all thru good and bad times (losing his dad and early career injury).

Recounting on her husband’s death, Iwona once said; “Fortunately, at the moment it happened, Robert was not home. Krzysztof struggled with the cancer, and one night he got another stroke and was not among us in the next morning. Robert was then living with his older sister in Bielany. I told him everything after class. He responded that he sensed it. He was very brave as a little kid.“ says Mrs. Iwona.

Even as a family man, Lewy still finds quality time to spend with his mum Iwona. He vows never to make her feel lonely since after his dad left.

SISTER: Milena Lewandowski is Robert Lewandoski’s sister. She was there for Lewy when he went through hard times while both were still kids. She is a professional volleyball player who have represented her country for year. She excels in volleyball while her brother excells in football.

Milena took after her mum, Owona who was a former professional volleyball player.

GRANDMOTHER: Lewy’s grandmother died at the age of 91 years. Below is her and Milena Lewandowski.

Behind the successful striker, there is a glamorous woman. Robert Lewandowski’s wife is Anna Lewandowska. She is a Polish athlete, a graduate of the Academy of Physical Education in Warsaw. She is also a specialist on nutrition, karate and finally, a representative of the Poland in traditional karate as at time of writing. Both had their wedding in 2013 which was his breakthrough year. Lewy’s love for Anna is pronounced and worthy of emulation by many of his fans and even footballers (the likes of Marcus Rashford, Roberto Firmino and Juan Mata who is known to have very decent relationships). Both Lewy and Anna are always seen stucked together.

It is pertinent to note that Robert Lewandowski’s wife Anna Lewandowski has a bronze medal in the karate category at the 2009 World Championships.

Robert Lewandowski on the 7th of December, 2016 announced that his wife was pregnant with a ‘pregnant belly’ goal celebration.

The Polish front man later felt ‘wonderful’ after posting a heartwarming photo of him and his newborn daughter Klara. Did you know??!!…Robert Lewandowski was the grandson of Hitler’s youngest sister who was called Pawla Hitler. She died in the year 1960.

Robert Lewandowski is a complete bike and motorcycle enthusiast! Despite having a professional football career, Lewa has not lost his motorcycle passion and has survived various accidents in the last 10 years. He was away from the stage for three months after an accident he had while driving his bicycle. His is now more careful that before. This is where we end for Robert Lewandowski’s Life Story.